Accessibility links
Priceless Coin Collection Returns Home To China Relatives of a former U.S. sailor and coin collector have returned part of his massive and rare collection to the Shanghai Mint Museum. The coins reflect 2,000 years of Chinese history, and the bequest represents the start of a series of returns the family plans. 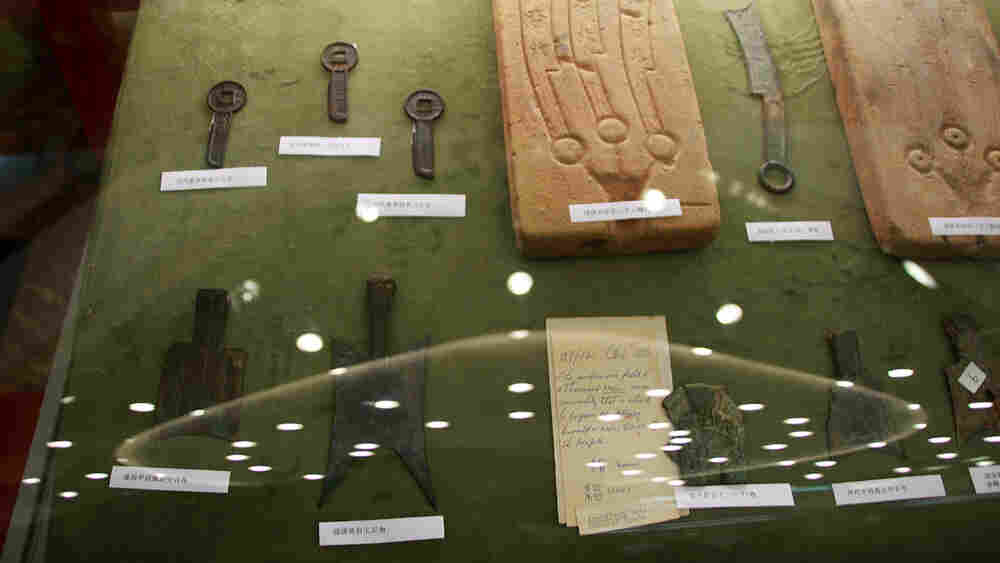 More than 100 items from U.S. numismatic enthusiast Howard Bowker's coin collection were presented to the Shanghai Mint Museum on April 16. Some of the items are so rare that experts say they are literally priceless. Shen Cichen/NPR hide caption 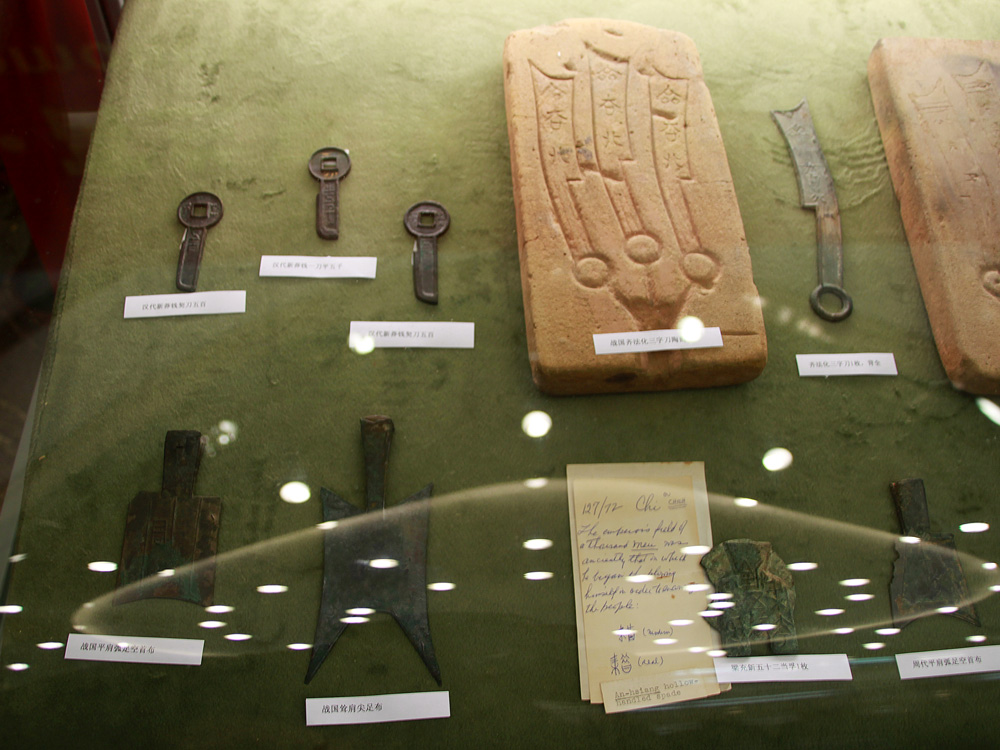 More than 100 items from U.S. numismatic enthusiast Howard Bowker's coin collection were presented to the Shanghai Mint Museum on April 16. Some of the items are so rare that experts say they are literally priceless.

In China, paramilitary police drill outside the Shanghai Mint. They're stationed there because it's literally a moneymaking plant.

It's also a museum and, on Friday, it received a new, welcome donation, hand-carried from the U.S. with far less security. 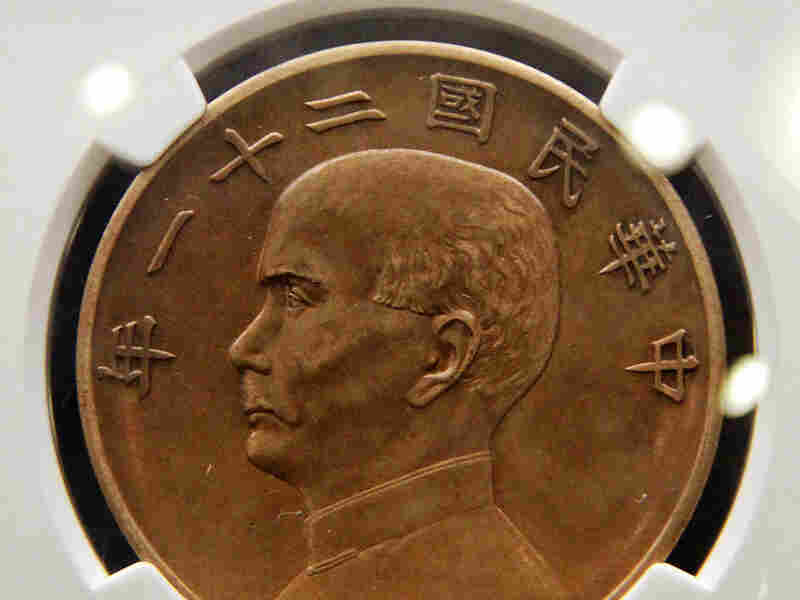 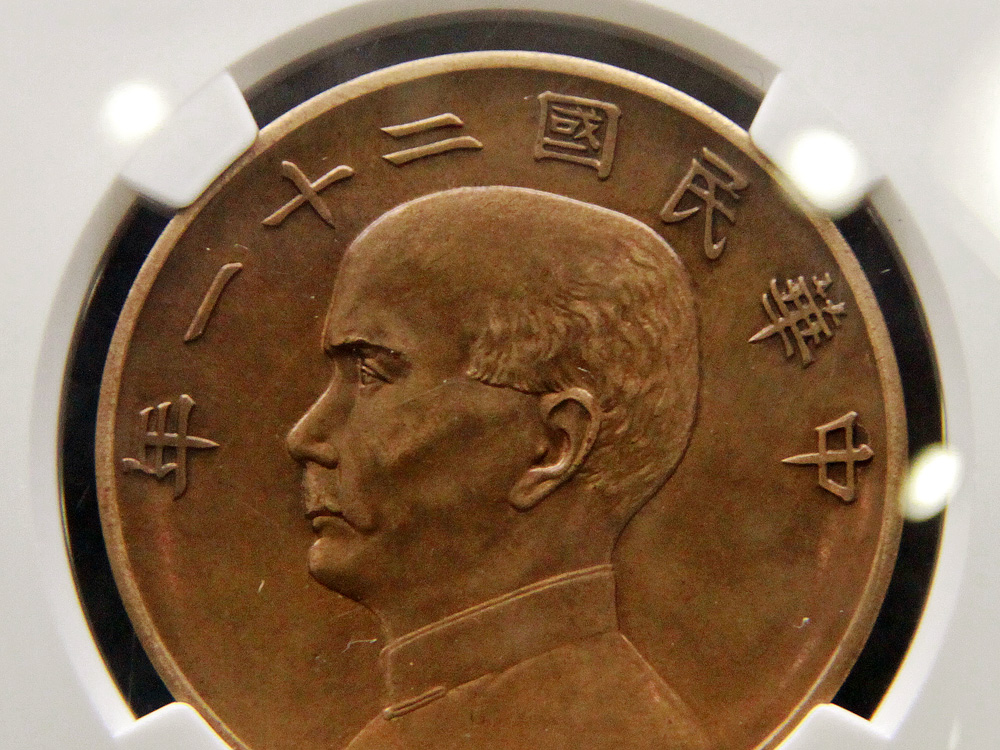 Gordon Bowker is one of the founders of Starbucks, although he no longer has any relationship with the company. He and his cousin Carolyn Bowker packed up part of their grandfather's priceless coin collection in their luggage, brought it to China and donated it to the Shanghai Mint Museum.

"There really is no better place for the coins to be," says Gordon Bowker. "They would have much less interest to scholars and to the public anywhere else in the world. So it's a natural thing for them to be in Shanghai where they originated."

Gordon and Carolyn Bowker's grandfather Howard Bowker joined the U.S. Navy when he was 19 years old and was stationed in Hankou, China, in 1923. He taught himself Chinese, Japanese and Korean. He also began collecting coins, a hobby that Gordon Bowker says married two of his grandfather's greatest passions.

"He was fascinated by Chinese history. And he had a big background in money: He was a purser, and a paymaster, and he liked money. I think he liked to count it," Bowker says. 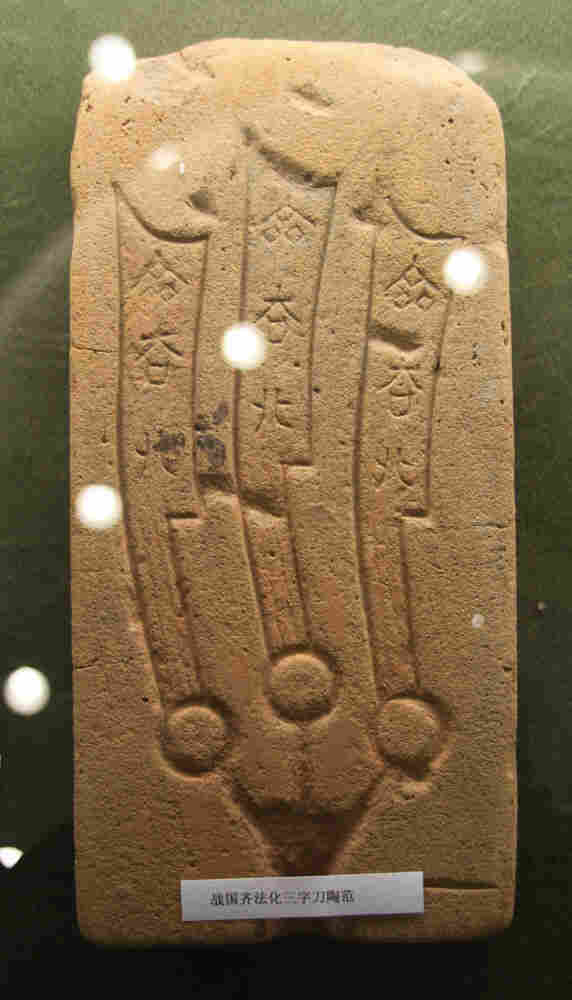 The oldest item in the collection is a coin mold that produces more than one coin at a time. It dates back to 200 B.C. and the reign of China's first emperor. Experts say items such as this one are considered "national treasures" and cannot be valued. Shen Cichen/NPR hide caption

The resulting coin collection reflects the past 2,000 years of Chinese history. Its earliest piece is a coin mold dating back to 200 B.C., during the reign of China's unifier and first emperor, Qin Shihuang.

Michael Chou from the iAsure Group, which runs an auction house specializing in Asian coins, has been researching the collection for two years. He describes how the coin mold produces multiple coins.

"They pour very hot metal into this mold and then a coin tree comes out of this coin mold, and then they break off the coins from the tree individually. So when someone tells you money doesn't grow on trees, it actually does in China," Chou says.

Chou says it's impossible to value much of the collection, since the objects are so rare, they seldom are sold on the open market. He says items such as the 2,000-year-old coin mold would be considered a "national treasure" in China.

Every coin in the collection is a tangible slice of China's history. One item with immense historical significance is a copper dollar featuring a sailing junk over three flying birds on one side and Sun Yat-sen on the other.

When it was issued in 1932, the Sun Yat-sen dollar was the first national coinage for the whole of China; until that point, coins had been issued regionally.

It's a testament to the chaos of China's recent history -- and the flow of valuables beyond its borders -- that the Shanghai Mint Museum didn't have a single example of this historic coin, which was designed in the U.S. by the Philadelphia Mint.

Zhang Yueqin is deputy general secretary of the Shanghai Mint's Coin Institute. When asked about the significance of this coin, his voice thickens and he becomes visibly emotional. 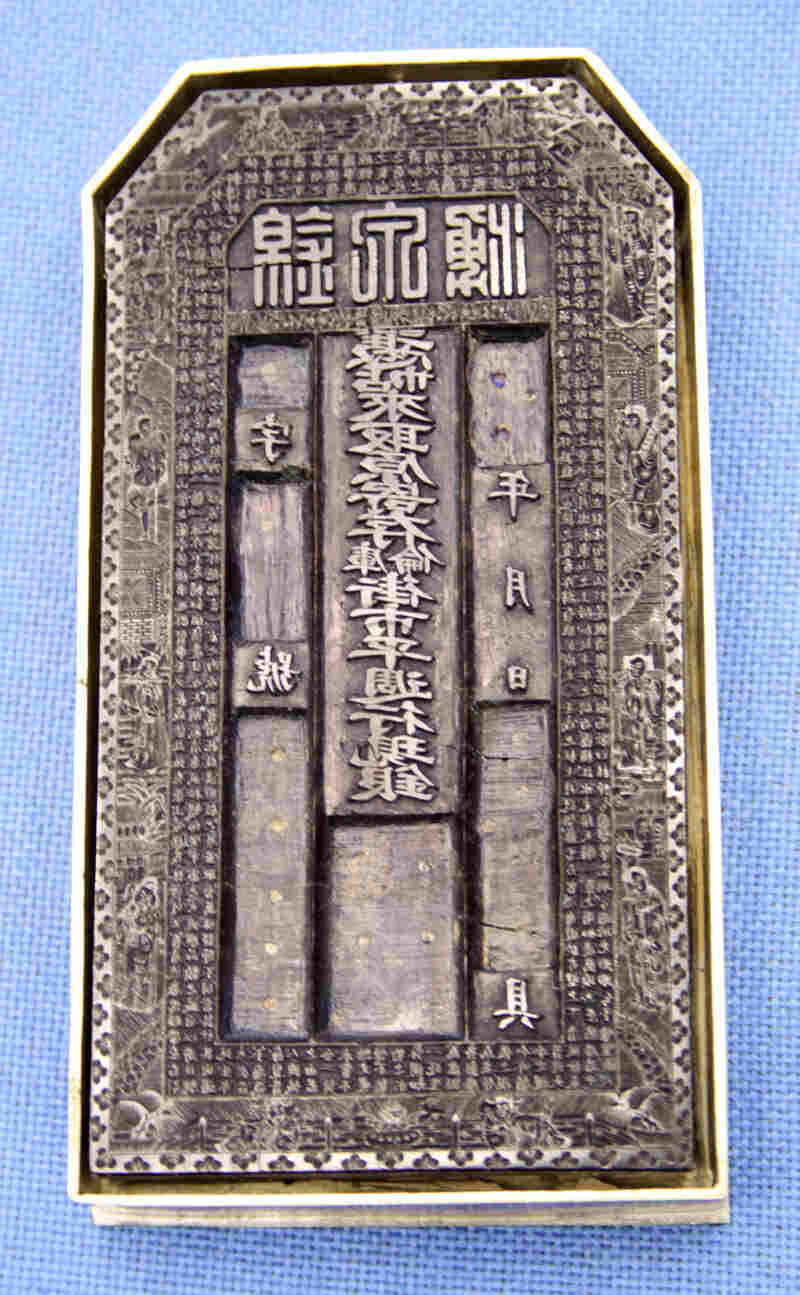 Another item donated to the Shanghai Mint is this mold for a bank note from the late 19th and early 20th centuries. Shen Cichen/NPR hide caption

"We had the mold, but we didn't have a coin," he explains. "The coin has finally come home. It's as if after 80 years a mother is reunited with her child. It's a miracle. The friendship between China and America is embodied in this coin."

Only First Installment Of Collection

The bequest, including a library, was originally left to the Smithsonian, where Howard Bowker had worked as a curator. But his descendants decided the collection would be better served -- and more accessible -- elsewhere.

"There's no curator of Asian coins at the Smithsonian," Gordon Bowker explains. "Without the staff and the ability to display the coins, it would display much less interest in having that collection."

The restitution of valuables to their point of origin is an increasing trend, although in this case, the coins were bought legitimately, not looted.

"Americans could lose out in that they don't get a broader sense of world history by the coins not being in the U.S.," Carolyn Bowker says. "I don't think there's a passion in American history for learning about some of the ancient, whether it's coins or artifacts. And so to have them returned to where the passion is, it just makes total sense to me."

The Bowkers handed over more than 100 coins Friday. But the entire collection consists of more than 5,000 coins, and the bequest to the Shanghai Mint Museum marks just the beginning of a longer process of return: The family plans to make other donations to a variety of Chinese museums.