Accessibility links
Tragedy Shines Light On Lives Of Yemeni Child Brides As Yemen becomes increasingly overpopulated and impoverished, many families see marrying off their young daughters and receiving dowries as a way to survive. But in early April, a 13-year-old girl bled to death after being forced to have intercourse with her 23-year-old husband. Despite widespread incidents of abuse and rape, child brides in Yemen have rarely protested or complained. But that is changing. 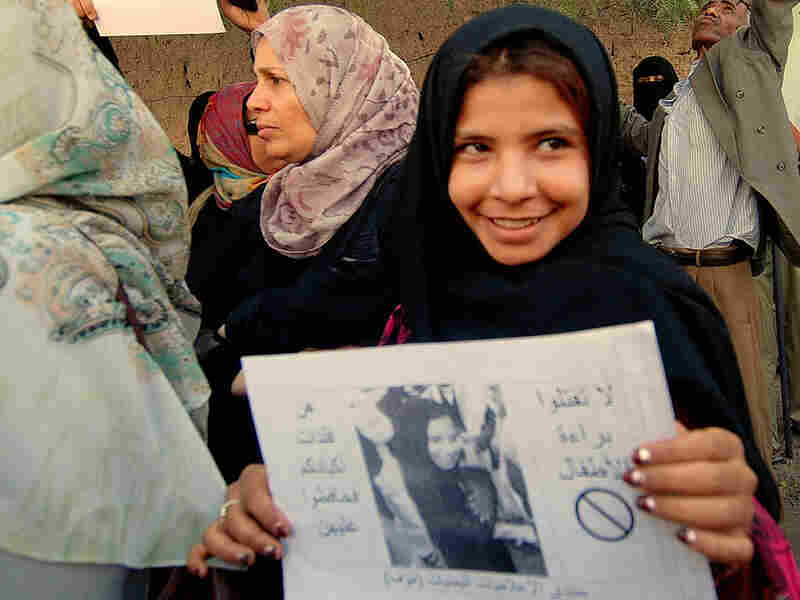 Nujood Ali, a former child bride in Yemen, demonstrates outside parliament in San'a, Yemen, on March 23 in support of proposed legislation banning the marriage of girls under 17. Ali was granted a historic divorce in 2008 at age 9 after her impoverished father forced her into an arranged marriage with a man 20 years older. Mohamed Huwais/AFP/Getty Images hide caption 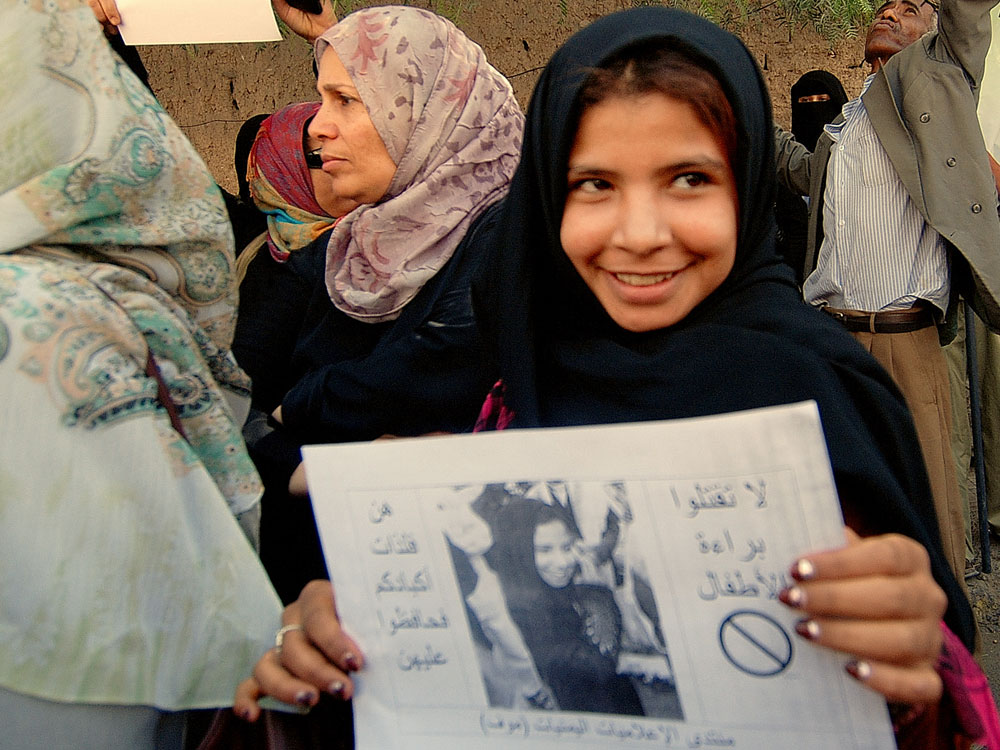 Nujood Ali, a former child bride in Yemen, demonstrates outside parliament in San'a, Yemen, on March 23 in support of proposed legislation banning the marriage of girls under 17. Ali was granted a historic divorce in 2008 at age 9 after her impoverished father forced her into an arranged marriage with a man 20 years older.

In early April, a 13-year-old girl in Yemen bled to death after being forced to have intercourse with her 23-year-old husband.

More than one-quarter of girls in Yemen are married before the age of 15, according to a 2009 study by the government's Ministry of Social Affairs, but they rarely come forward to protest or complain.

That's been changing lately, and later this month, the Yemeni parliament is set to vote on whether to impose a minimum-marriage age of 17 for women and 18 for men.

It all started with a little girl named Nujood Ali, who had a little voice and a bold plan.

Ali was sent to a remote village to live with her husband's family. From the first night, her husband forced himself on her and beat her when she resisted.

She persuaded her husband to let her visit her family in Yemen's capital, San'a. She went to her stepmother for advice. If you want to end this marriage, the stepmother said, why don't you go to court?

Ali says that she spoke with her stepmother on a Tuesday, spent the whole night thinking about it, and then decided to go the next morning. 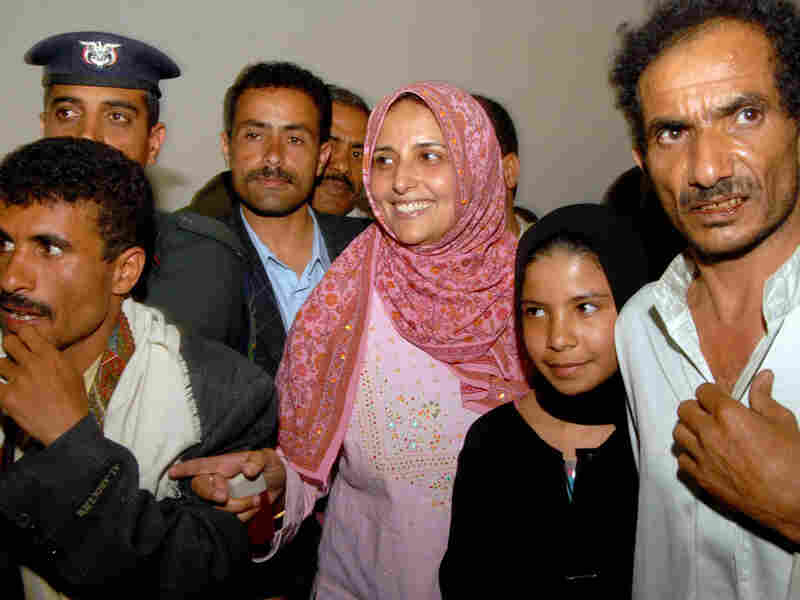 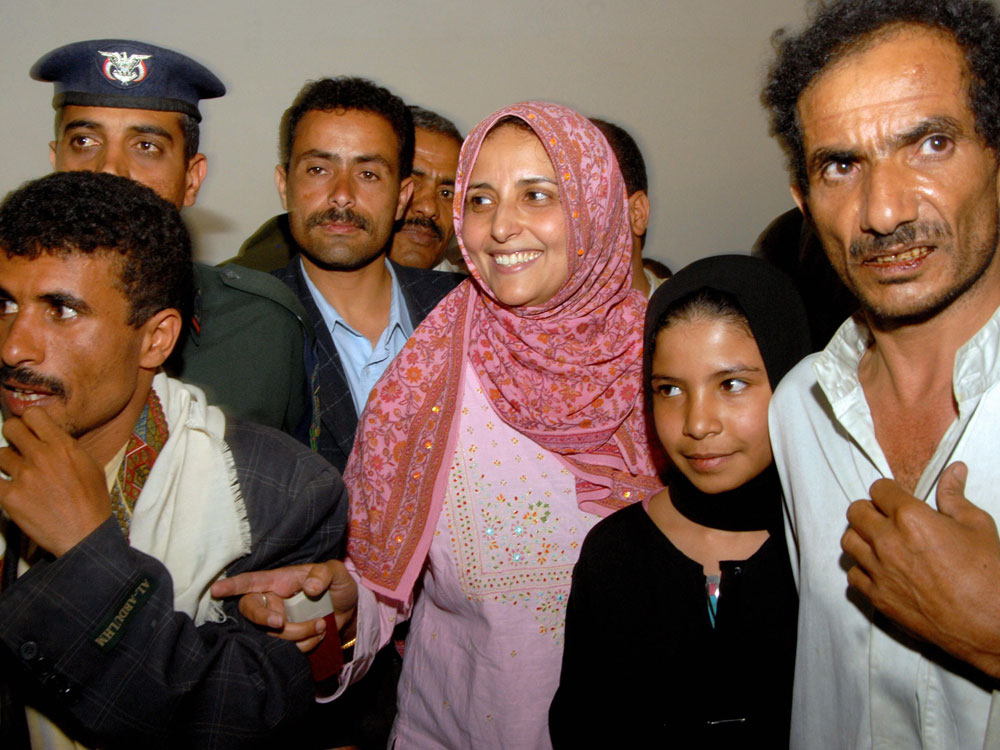 In this April 2008 photo, Ali (second from right), her lawyer, Shada Nasr (third from right), father, Mohammed Ali Al-Ahdal (right) and husband, Faez Ali Thameur (left) attend a public hearing regarding the young girl's arranged marriage and request for divorce at a court in San'a, Yemen.

Four feet tall and dirt poor, Ali took a minibus to a taxi and a taxi to the courthouse. She recalls how frightened she was when she walked up to the first judge she saw -- and asked for a divorce.

The divorce eventually was granted in April 2008. Ali was flown to New York to receive an award from Glamour magazine, and her story is the subject of new a memoir she wrote with a French journalist. These days, she is somewhat of a celebrity in Yemen.

But women's-rights advocates in Yemen say Nujood Ali's story is only one of what could be millions. Rashida al-Hamdani heads a government organization for the advancement of women. She says the custom of child marriage is not new in this region. What's new is the way it's practiced.

"All our mothers got married at the age of 13, 12, 11. The men usually were [a] similar age ... and [the girl] was mostly living [with] the families. So they were taking care of her, and she was not to be touched until maturation. It's different now," Hamdani says.

In other words, the larger extended family made sure the young man waited to consummate the marriage at least until his wife had reached puberty. But now, that tribal culture is breaking down, and nuclear families live apart from the larger group.

And because Yemen is increasingly overpopulated and impoverished, many families see marrying their young daughters and receiving dowries as a way to survive.

"Some families are getting rid of their girls because of poverty. Some of them are selling their children, and some of them are -- they think it's what you call sitr istr bintak, which means you have to cover the girl, put her in a place where she will be protected," Hamdani says

Edict Of Islam Or Ingrained Tradition?

This idea of sitr in the Arab world means it's better to marry off your daughter than to let her become the object of men's desires, which brings shame to the family. The debate in Yemen, and in neighboring countries such as Saudi Arabia, is whether Islam -- or merely tradition -- dictates these practices. It's said that the Prophet Muhammad's beloved wife Aisha was just 9 years old when the two were betrothed.

But Islamic scholar Shoqi al-Qahdi says that doesn't mean all Muslims should do the same now.

"That was 1,400 years ago," Qahdi says. "Nowadays we are more protective of children."

Qahdi is also a member of parliament who supports a law that would set the minimum marriage age at 17. The law passed last year but then was repealed and sent back to committee after some lawmakers called it un-Islamic. The committee is expected to make a final decision later this month.

Qahdi says he thinks those who oppose the bill will come around, mainly because of the health risks associated with early marriage.

The mother of the girl who died earlier this month said the victim bled to death after she was tied down and raped by her husband. And last year, a 12-year-old girl died after three days in labor.

Matrimony And The Matter Of Money

Shada Nasr is the lawyer who defended now-famous Nujood Ali. She says even if the law passes, it will take time and resources to implement it. But at least now girls know they have a way out.

"After Nujood's case, now we have proof to explain [to] parliament and the government, this marriage ... is illegal. ... This is official rape, OK, this is not marriage," she says.

Most times, Nasr says, the way to get a girl divorced is with money. But money is in short supply in Yemen these days.

Take the example of how one Yemeni father who sells spices on the street struggles to get by, Nasr says. He makes about $1 or $2 a day, with which he needs to support his family of five.

"That means this man, he can open ... a very nice window for new future," she says.

Suppose, though, that the daughter in this family later wants a divorce from the man who paid $1,000 for her. Her husband might grant the divorce, but only if he can get his money back, so he can pay for another wife. The girl's father has already spent the money. So who will pay for the divorce?

'I Should Be In School'

One girl, who goes only by the name Sali, was forced to marry her older cousin when she was 10. Her husband, too, forced her to have sex with him and beat her when she resisted. She eventually ran away and now wants a divorce.

Sali says she followed Ali's example and took her case to court. The police detained Sali's husband and father while her divorce proceedings went forward. Aid groups and private individuals raised the $1,000 the husband demanded in lost dowry. Now, Sali says she will never marry again.

Sali says that she didn't know what marriage was really about: "I thought it was just a dress, it was just [about] gold."

At one point, Sali looks over her shoulder, worried that a neighbor might see her talking to a reporter. "I should be in school," she says, looking down. A girl like me, she says, should be going to school.