Accessibility links
Rules to Target Illegal Immigrants Worry Employers In a move to clamp down on illegal immigrants, the Bush administration is poised to announce new rules that would effectively require employers to fire workers if they use phony Social Security numbers. But employee and business groups fear the change could also hurt many legal workers.

Read the Proposed Dept. of Homeland Security Rules in the Federal Register (PDF) 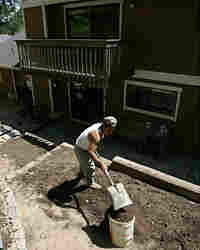 A worker fills a bucket with dirt on a landscaping job in San Rafael, Calif. Justin Sullivan/Getty Images hide caption

The Bush administration is about to clamp down further on the hiring of illegal immigrants. It's expected within days to announce new rules that would effectively require employers to fire workers if they use phony Social Security numbers. But employee and business groups fear the change could also hurt many legal workers.

Millions of workers each year get notices from the government that the Social Security numbers and names they use for their jobs don't match government records. Often it's a mistake.

Former immigration commissioner Doris Meissner says that a worker might have put the wrong number on their job application.

"The employer may have made an error in transmitting the number to the government," she says. "The number and the name may not be connected in the government's records because the person got married and forgot to send in a change of name."

But it also can be a sign that an illegal immigrant used a phony Social Security number to get a job. For 13 years, the government has routinely notified employers who have more than 10 such "no-matches" on their payrolls. Now, the administration wants to make an employer's continued employment of these workers an indication that they've knowingly hired an illegal immigrant.

"Frankly, a lot of employers are going to play it safe and fire these employees," says Randy Johnson, who handles immigration issues at the U.S. Chamber of Commerce. He says that even an allowance of a couple of months or so to resolve mistakes might not prevent what he calls "collateral" damage.

"You might have some Americans ... and permanent residents who, for example can't explain the discrepancy and they have to go to Social Security to get the records for it, and they can't get it in time," Johnson says. "And the employer might say, 'Well, gee, I can't take the chance of keeping you on my rolls.'"

But the Bush administration says it needs the new authority to reduce illegal immigration, especially now that Congress has failed to enact more sweeping reform.

A spokesman for the Homeland Security Department says that the change will help the government go after some of the millions of illegal immigrants now working in the United States and those who employ them.

Many lawmakers have been pushing the department to increase workplace enforcement, which they believe is one of the most effective ways to address the problem.

But Meissner, who's now with the Migration Policy Institute, says this new step will have limited impact.

"The workers are likely to be able to find jobs elsewhere in the economy because what we're dealing with here is not just a question of enforcing the law in terms of employers and who they hire, but also the need for more workers in lots of occupations," she says.

Those occupations include farming and low-paying jobs that involve manual labor. Immigrant-rights groups and employee unions are concerned about the impact on legal immigrants and citizens, especially Hispanics, who might be targeted by employers.

"It's going to be another tool in their arsenal that they can pull out at any time they want to fire a worker who tries to enforce her workplace rights," she says.

Avendano notes the case of one legal U.S. resident in North Carolina whose name ended up on a "no-match" list.

"The employer told her to fix it. She tried. She actually did fix it. She came back with the correction from Social Security and the employer said, 'Oh this isn't good enough for me. You're fired.' There's nothing to prevent that."

Homeland Security officials say that's clearly not their intent. In fact, they delayed implementing the new rules — which were first proposed last year — hoping for congressional passage of a bill that would not only tighten enforcement, but expand temporary job opportunities for immigrants. But that didn't happen. And now they say, they plan to more aggressively enforce the existing law.