Accessibility links
Civil Rights Activist Dorothy Height Dies The legendary civil and women's rights activist died early Tuesday at Howard University Hospital in Washington, D.C. She was 98. Height, who spent her life championing equal rights causes, consulted with presidents from Eisenhower to Obama and was an inspiration to many women.

Legendary civil rights leader Dorothy Height, who spent most of her life battling for the empowerment of women and blacks and who had the ear of U.S. presidents from Eisenhower to Obama, died Tuesday. She was 98.

She died of natural causes at Howard University Hospital in Washington, D.C.

In 1963, Height was the only woman on the speaker's platform when Martin Luther King Jr. gave his "I Have a Dream" speech. But she wasn't on the program for the March on Washington even though she was the nucleus of the meetings held by the mostly male civil rights leaders who planned it.

Every black woman, it seems to me, has to see Dorothy Height as an inspiration.

Eleanor Holmes Norton, the District of Columbia's representative in Congress

Height told NPR in 2003 that the experience was uplifting despite the fact that a gospel singer was the only woman heard from the podium that day.

"My being seated there had some very special meaning because women had been trying to get a woman to speak on the program," Height said, "but we were always met by the planners with the idea that women were represented in all of the different groups, in the churches, in the synagogues, in the unions, organizations and the like. So the only voice we heard of a woman was that of Mahalia Jackson."

Though not a scheduled speaker, Daisy Bates was ultimately allowed to say a few words at the event.

Height said women in the movement met the next day to discuss ways to deal with the issues of racism and sexism.

"All of it was toward saying how can we bring all the people who need to understand the role that women have played, but also the predicament women face, and especially we who are women of color, where we’ve had both sex and racial discrimination as a characteristic of our lives," she said.

By the 1960s, Height had already been focused on equality and fairness for more than 30 years. And she had dedicated her life to those battles.

Dorothy Irene Height was born in Richmond, Va., on March 24, 1912, and grew up in Rankin, Pa. In high school, she won a scholarship to Barnard College after winning a national oratorical contest. But she arrived after Barnard had already admitted the two blacks it accepted per year at the time. Instead, Height earned her bachelor's and master’s degrees at New York University in four years and did postgraduate studies in social work. By 1933, Height was working against lynching and for reforms in the nation’s criminal justice system and for free access to public accommodations.

Height, who was awarded the Congressional Gold Medal in 2004, is perhaps best known for her work with the National Council of Negro Women. The group's headquarters in Washington, D.C., stands steps from where slaves were once traded in the shadow of the U.S. Capitol. Height was president emerita of the NCNW.

"Everything that we do today is influenced by her sacrifices decades ago, her marches as a teenager against lynching, her buying a building right on Pennsylvania Avenue to in a sense to talk about the slave trade, and her commitment to open up doors for others is unparalleled," Ogletree said.

In 1937, Height was working with the YWCA in Harlem and was assigned to escort Eleanor Roosevelt into one of the Negro women's group meetings. NCNW founder Mary McLeod Bethune noticed Height and asked the young woman to join the organization’s quest for women's rights for full, equal employment, pay and education. In addition to her 33 years on the national board of the YWCA and her nearly 40 years with the NCNW, Height also served as national president of Delta Sigma Theta Sorority Inc. from 1947 to 1957. The tiny woman was known for her impeccable attire -- and her stylish, striking hats.

"Every black woman, it seems to me, has to see Dorothy Height as an inspiration," said Eleanor Holmes Norton, the District of Columbia's representative in Congress.

She said everyone who was either a feminist or in the civil rights struggle has worked with Height. But black women are not the only ones who were in awe of her, according to Holmes Norton.

"Dorothy Height gets the same kind of hush when she comes into a room full of white women," the lawmaker said.

She said Height's ability to bridge racial, regional and class divides between women was important, but that it was her focus on education, voter registration and political mobilization that was vital to black women, who weren't able to engage in the political process at the same level as their white counterparts after women got the vote in 1920.

A Leader In The Civil Rights Movement

Civil rights icon Rep. John Lewis (D-GA) said Height should be counted among the leaders of the movement. Her ability to distill a message and direction from a roomful of dissenting voices, he said, was extraordinary.

"Dorothy Height emerged at a time when there was male chauvinism at its height," Lewis said.

She "had the rare ability -- and I think part of it was just innate -- to sort of soothe the conflict, the division, the schism, and bring people together," Lewis said. "Being a woman, but more than just being a woman, she could say, 'Now brethren, now brothers and sisters,' and people listened to her." 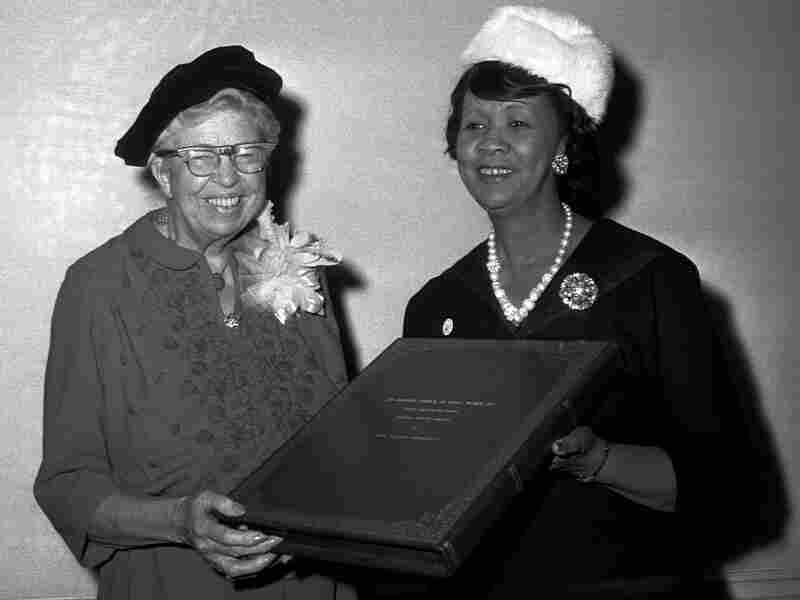 Dorothy Height presents Eleanor Roosevelt with the Mary McLeod Bethune Human Rights Award in 1960. At the time, Height was president of the National Council of Negro Women. Bettmann/Corbis hide caption 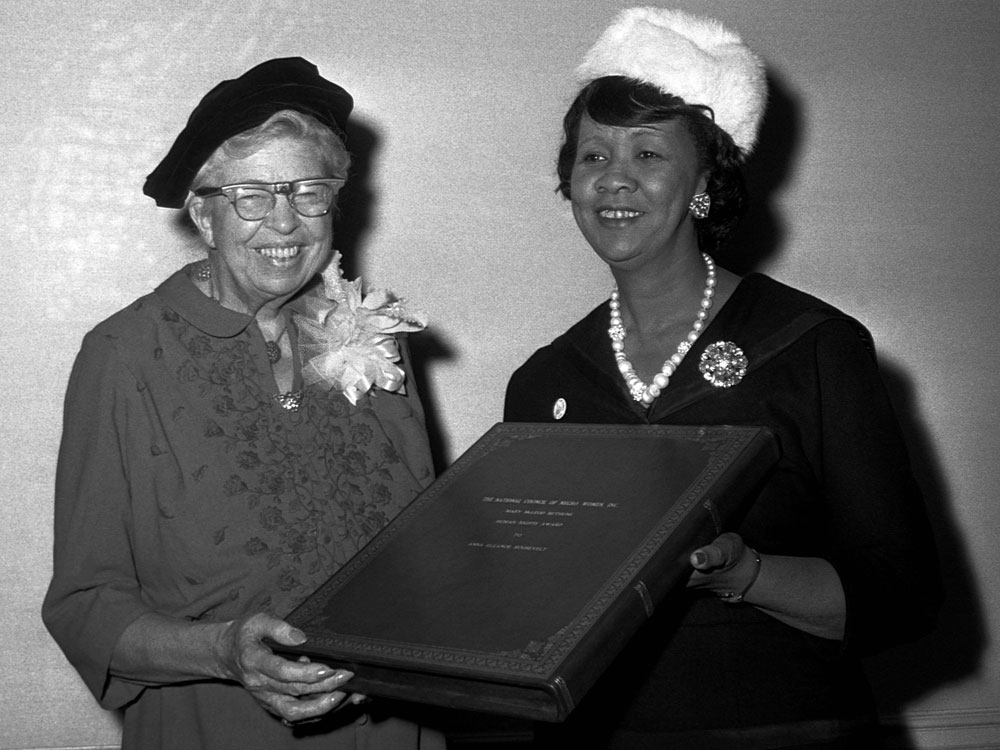 Dorothy Height presents Eleanor Roosevelt with the Mary McLeod Bethune Human Rights Award in 1960. At the time, Height was president of the National Council of Negro Women.

Her fundraising abilities were legendary. "She could call her white sisters and Jewish sisters and others -- she could get on the telephone and call the Rockefellers, the Fords and others, and they'd listen to her," Lewis said.

Height continued to fight for equal justice up until the end of her life. In 2008, she told NPR -- while wearing a feathered purple chapeau with a fetching bow -- that there is unfinished business in civil rights.

And Height left a message for the young people she has worked with so passionately throughout her career. The younger generations, she said, are the beneficiaries of what a lot of people worked and gave their lives for. It is important for the young to get organized in how they will serve others, because when people work for something bigger than themselves, there's no way they can help but grow.