Accessibility links
When The 'Trust Hormone' Is Out Of Balance How much we trust the people around us may be strongly influenced by biology. Studies have found that levels of a hormone called oxytocin can change how trusting we are. Some people, like 9-year-old Isabelle, are born with a genetic disorder that may interfere with the body's regulation of this hormone. Isabelle has no social fear. She literally trusts everyone.

Listen
When The 'Trust Hormone' Is Out Of Balance 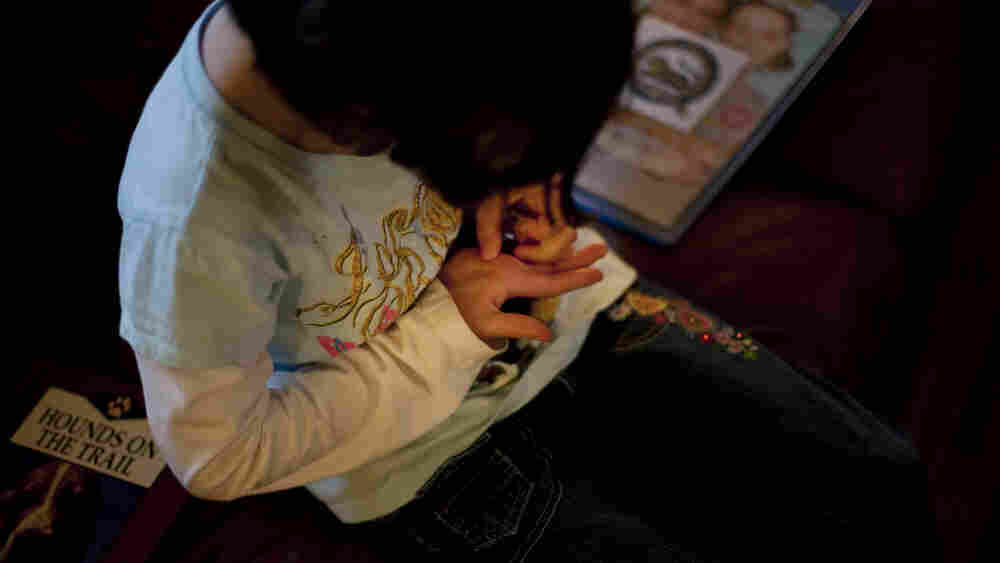 Isabelle, 9, has a rare genetic disorder called Williams syndrome. One of the symptoms is that people have an inability to distrust anyone, even strangers. Isabelle often picks at her hands as a means of relieving stress. Jesse Neider/for NPR hide caption

This is a story about a fickle little hormone that plays a large role in our lives.

The name of the hormone is oxytocin, and until recently it was mostly dismissed by scientists. They knew it played a role in inducing labor and facilitating breast-feeding, but otherwise didn't give it much attention.

But over the past 10 years, oxytocin has come up in the world, and several researchers have begun making big claims about it. Now dubbed "the trust hormone," oxytocin, researchers say, affects everything from our day-to-day life to how we feel about our government.

The narrative of oxytocin -- the trust hormone -- is being rewritten.

To understand the role that oxytocin plays in your own life, consider the experience of a small 9-year-old girl named Isabelle. (NPR is not using the full family name in this story for privacy reasons.)

Isabelle lives with her mother, Jessica, in a leafy East Coast suburb. Often, Jessica says, she'll be out running an errand when she'll bump into a well-meaning parent whose child goes to the same school as her daughter. The parent, Jessica says, invariably has news to share about an experience with Isabelle, and the conversations always go the same way:

"They'll say, 'Oh, I saw your daughter at school today. She's so cute, she always tells me, 'I love you' when I see her in the hallway,' " says Jessica. "And I'll just be grimacing thinking, 'There we go again.' " 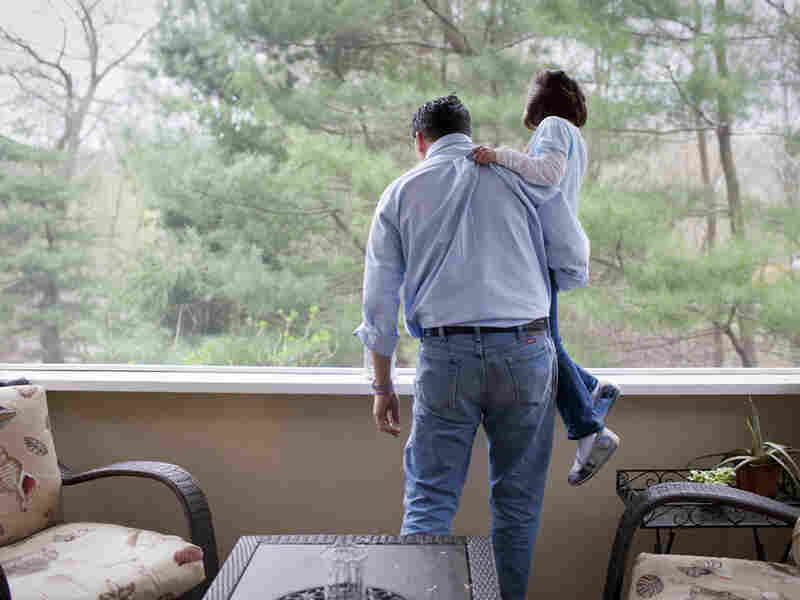 Isabelle and her dad look for wildlife in the woods. Isabelle's disorder means that her parents, as well as teachers at school, have to constantly monitor her to make sure strangers aren't taking advantage of her. Jesse Neider/for NPR hide caption 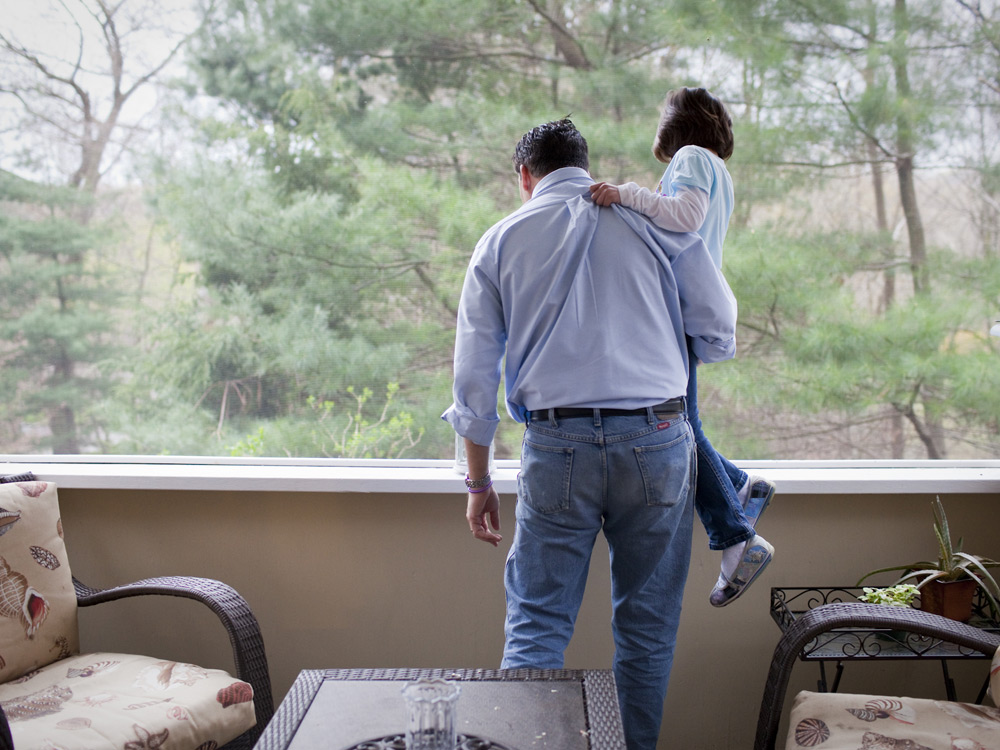 Isabelle and her dad look for wildlife in the woods. Isabelle's disorder means that her parents, as well as teachers at school, have to constantly monitor her to make sure strangers aren't taking advantage of her.

Isabelle, you see, says "I love you" to everyone: to parents at her school, to people from the neighborhood, to the salesman at Circuit City.

"Oh, all the time," Jessica says. "To Isabelle, there are no strangers -- only friends she's not yet met."

The problem is that Isabelle has Williams syndrome, a rare genetic disorder with a number of symptoms. The children are often physically small and often have developmental delays. But also, kids and adults with Williams love people and are pathologically trusting: They literally have no social fear.

Researchers theorize that this is probably because of a problem with the area in their brain that regulates the manufacture and release of oxytocin. Somehow, the system in which oxytocin operates has been disrupted in a way that makes it essentially biologically impossible for kids like Isabelle to distrust.

And this presents a terrible dilemma for Jessica. Isabelle completely trusts the world, but of course, the world is not worthy of complete trust.

And so several years ago, Jessica decided that, Williams be damned, she herself would teach Isabelle to distrust. There were other symptoms of the disorder that Jessica's perseverance had overcome: Though Williams kids often have severe cognitive problems, Isabelle had learned to read.

But Jessica says no matter what she did, the trust her daughter offers perfect strangers could not be extinguished.

"I just kept thinking if I can just find the right tools, if I can buy a toy, if I can buy her a video, if we can model the behavior and reward it with sticker charts," Jessica says. "But it didn't amount to so much. That willingness to open herself up -- we can't get it to go away. "

Isabelle's uncritical trust and love of people, Jessica has concluded, is an irreversible, biological fact.

From the perspective of Paul Zak, a researcher at Claremont Graduate University, Jessica's problem is not surprising.

"I've observed children with Williams, and they are supertrusters," says Zak, who is both a neuroscientist and an economist. "They don't modulate the balance between trust and distrust."

He says that in a normal brain, oxytocin is generated only after some concrete event or action: A man you pass on the street tips his hat; a woman smiles.

"When someone does something nice for you -- holds a door -- your brain releases this chemical, and it down-regulates the appropriate fear we have of interacting with strangers," Zak says.

Suddenly, you are filled with a sense that the person before you is not a threat. And then just as quickly, according to Zak, it disappears -- for very good reason.

"If you just had high levels of oxytocin, you would be giving away resources to every stranger on the street," he says. "So this is a quick on/off system."

Unless, of course, the system gets disregulated, which is what Zak and other scientists say happens with Williams syndrome.

Does Biology Affect Our Trust In Government?

Zak first got interested in trust more than a decade ago after co-authoring a study that looked at trust levels in different nations and their economic stability. The study found that the higher the level of trust, the better the economic status of the nation.

The work got Zak thinking more generally about different ways to manipulate trust, and so starting in 2001, Zak began spraying oxytocin up the noses of college students to see if the hormone would change the way they interacted with strangers.

It did. Squirt oxytocin up the nose of a college kid, and he's 80 percent more likely to distribute his own money to perfect strangers.

This gave Zak an idea. Like some comic-book villain concocting a plan to take over the world by dumping happy pills in the water supply, he wondered if it might be possible to use this molecule -- oxytocin -- to change the way people felt about the government.

"How much does this scale up?" Zak wondered. Could the effect go from the individual all the way up to gigantic institutions like the government? Zak decided to see. He undertook this experiment at a particular historical moment: America was in the midst of the Great Recession.

Zak put 130 test subjects through his normal routines. He sprayed half of them with oxytocin, half with a placebo, then ran them through a battery of tests and measurements.

"The people on oxytocin did report that they trusted other people more, and the people who trusted others more also trusted their government more. So it's sort of a two-step process," he says.

"So the underlying biological hypothesis is that stress -- particularly stress that does not have a clear ending point -- inhibits oxytocin release. So there could be an actual biological reason why trust in government is so low."

Not Convinced Biology Is To Blame

"I think that biology plays a very trivial role influencing trust in government and distrust," she says.

This isn't to say, Levi adds, that the work is without merit. For instance, one of the things that Zak's experiment suggested was that it was mainly through trusting other people that trust in government increases: Those who trusted their fellow man more also trusted government more.

And this, says Levi, is consistent with one of the big theories that's dominated this area for the past 20 or so years. The theory was proposed by a Harvard professor named Robert Putnam, who wrote a famous book called Bowling Alone: The Collapse and Revival of American Community.

Putnam essentially argues, Levi says, that the way in which trust in government is generated is basically bottom up. It's from the relationships that we form with others through various kinds of neighborhood and local organizations, like soccer clubs and choir groups, that we come to have confidence and trust in each other. This ultimately leads to a trust in the institutions of government and the institutions of the economy.

Now, this is not Levi's view. From her perspective, it works top down: Governments need to be trustworthy to get people to trust them.

"If we're talking about trust in government, the most important factor is whether people believe the government is doing the job they want government to do for them," Levi says.

But whether it is government being effective or biology or trust generated through social groups, Zak says it's critically important to better understand trust.