Accessibility links
India's Mentally Ill Turn To Faith, Not Medicine In India, there is only 1 psychiatrist for every 400,000 people, a recent study shows. It means that most people in India go untreated by doctors for substance abuse, severe depression and psychotic disorders. Instead, they turn to the gods. 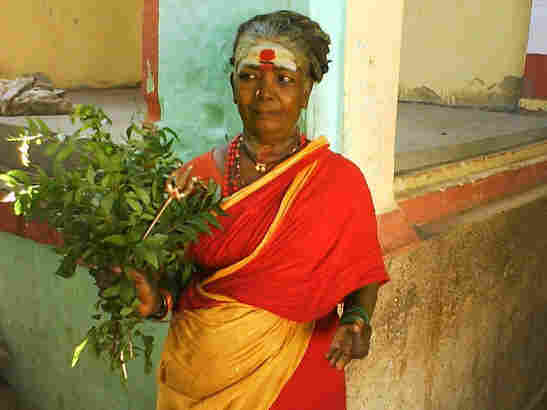 Resident exorcist Muthalama at the temple at Hanumanthapuram in rural Tamil Nadu claims she can purge the possessed of evil spirits. She uses the trident, or three-pronged spear, and the neem leaves she holds in her right hand. The red and yellow powder on her forehead indicates her holy status. Miranda Kennedy for NPR hide caption 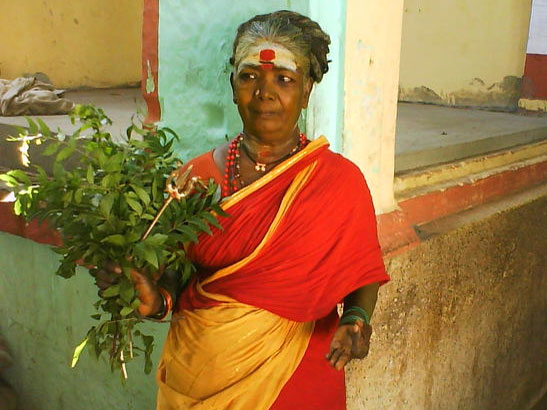 Resident exorcist Muthalama at the temple at Hanumanthapuram in rural Tamil Nadu claims she can purge the possessed of evil spirits. She uses the trident, or three-pronged spear, and the neem leaves she holds in her right hand. The red and yellow powder on her forehead indicates her holy status.

In India, there is only 1 psychiatrist for every 400,000 people, according to a recent study by the Indian government. It is one of the lowest ratios anywhere in the world.

It means that most people in India go untreated for substance abuse problems, severe depression and psychotic disorders. Or rather, they go untreated by doctors. Instead, they turn to the gods.

Many people believe one particular South Indian temple can heal the mentally ill.

The temple at Hanumanthapuram is always packed with worshippers. They travel from across India for days and weeks, by bullock cart and on foot, to get to this lush, rural part of Tamil Nadu. They come because the powerful Hindu deity here, an incarnation of Shiva, is supposed to purge evil spirits.

Dama Lakshmi is a tough, wiry woman in her 60s who talks nonstop, even as she slurps her plastic cup of chai while squatting on her haunches. She says that several years ago, evil spirits possessed her daughter, Manimagali. Her husband kicked Manimagali out and, with her mother, she moved into the temple to wait to be cured.

Manimagali's eyes are glazed over. Her mother says Manimagali often chants in a language she can't understand.

"She just started behaving very weirdly and I believe it's because of evil magic," Dama Lakshmi says. "She will talk very filthy language and laugh to herself a lot."

People find it easier to say their children or themselves are affected because of evil magic, because there is so much stigma attached to mental illness.

Faith healers and temple doctors are by far the most socially acceptable way to try to cure mental illness in India. There are hardly any psychiatrists -- and a mere 37 mental institutions to serve the country's whole population of 1.2 billion.

But even if there were more professionals, it might not matter. Psychiatrists compete not with each other but with healers and gurus.

Every morning at dawn, Manimagali files inside the temple with a group of somber women, seemingly in a trance. The women's saris are grubby, and many of them have allowed their hair to mat into dreadlocks, which is unheard of in a country where neatness is prized.

This day, a priest draws back the curtain covering the idol of Shiva, and the women start to shriek and wail. It's as though the image of the god is actually bringing out their psychosis. They throw their bodies against the temple walls and beat themselves with their fists.

"Each one gets into a trance," says Porkodi, a social worker who goes by only one name. "One is screaming, one is shaking all over, one is rolling on the floor. The bells are ringing. I've seen them calling the deity filthy names also. This fit happens for about half an hour -- and it subsides."

Social worker Porkodi goes to the temple a lot. She spends hours trying to cajole the mentally ill to visit a nearby psychiatric clinic. After she persuaded Manimagali to go, the doctor told her she was schizophrenic. But her mother didn't have the money to keep paying for the anti-psychotic drugs he prescribed. In any case, Manimagali felt more comfortable dealing with the gods. Porkodi sees this a lot.

"People find it easier to say their children or themselves are affected because of evil magic, because there is so much stigma attached to mental illness. So, in Hindi there is a saying: dawa bhi chahiye, duah bhi chahiye. Dawa is medicine, duah is your prayers. So a bit of both only will help," she says.

India's official medical establishment does not agree with the "bit of both" theory. It wants nothing to do with traditional healers. But there are mental health professionals who are more flexible about it.

Chris Fairburn is a professor of psychiatry at Oxford University who helps fund mental health programs in India. After taking a tour of rural hospitals along bumpy roads in Tamil Nadu, he says, it seems unrealistic to ignore how pervasive temple doctors are.

"For those of us interested in trying to work out how to deliver mental health care to countries with very limited resources, we should think about what resources are already there," Fairburn says. "We don't have to approve of them or necessarily condone what they do, but we have to acknowledge their existence and try and find out what they do."

Every day in India, medicine must do battle with religion. In the temple at Hanumanthapuram, it's pretty clear which one wins.

After the morning ritual, the resident exorcist makes a dramatic entrance to the temple, wearing a saffron sari. Her face is painted with red and yellow powder, and she proudly wields a three-pronged spear to intimidate evil spirits. Only she is able to reach the god who resides in this temple, she tells Dama Lakshmi. She makes her an offer. She'll expel the spirits from her daughter for a price of $150 -- an impossible sum for Dama Lakshmi.

Miranda Kennedy reported from India on a grant from the International Reporting Project.