Accessibility links
Foreign Policy: Dawn Of The Nuclear Backlash Though Russia and the United States received considerable praise for their commitment to eliminate thousands of nuclear warheads, they face criticism from some countries outside the circle of nuclear powers for imposing rules — but not following them. Colum Lynch says the mistrust can come with serious consequences. 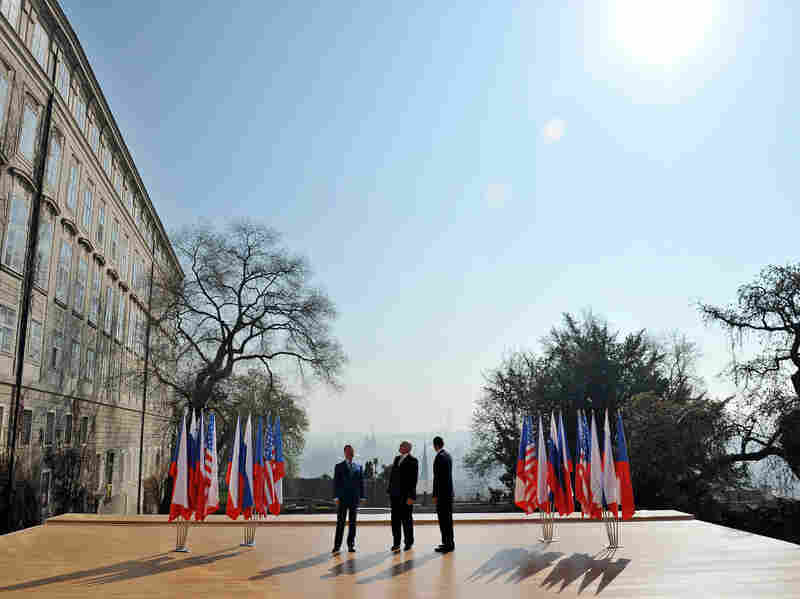 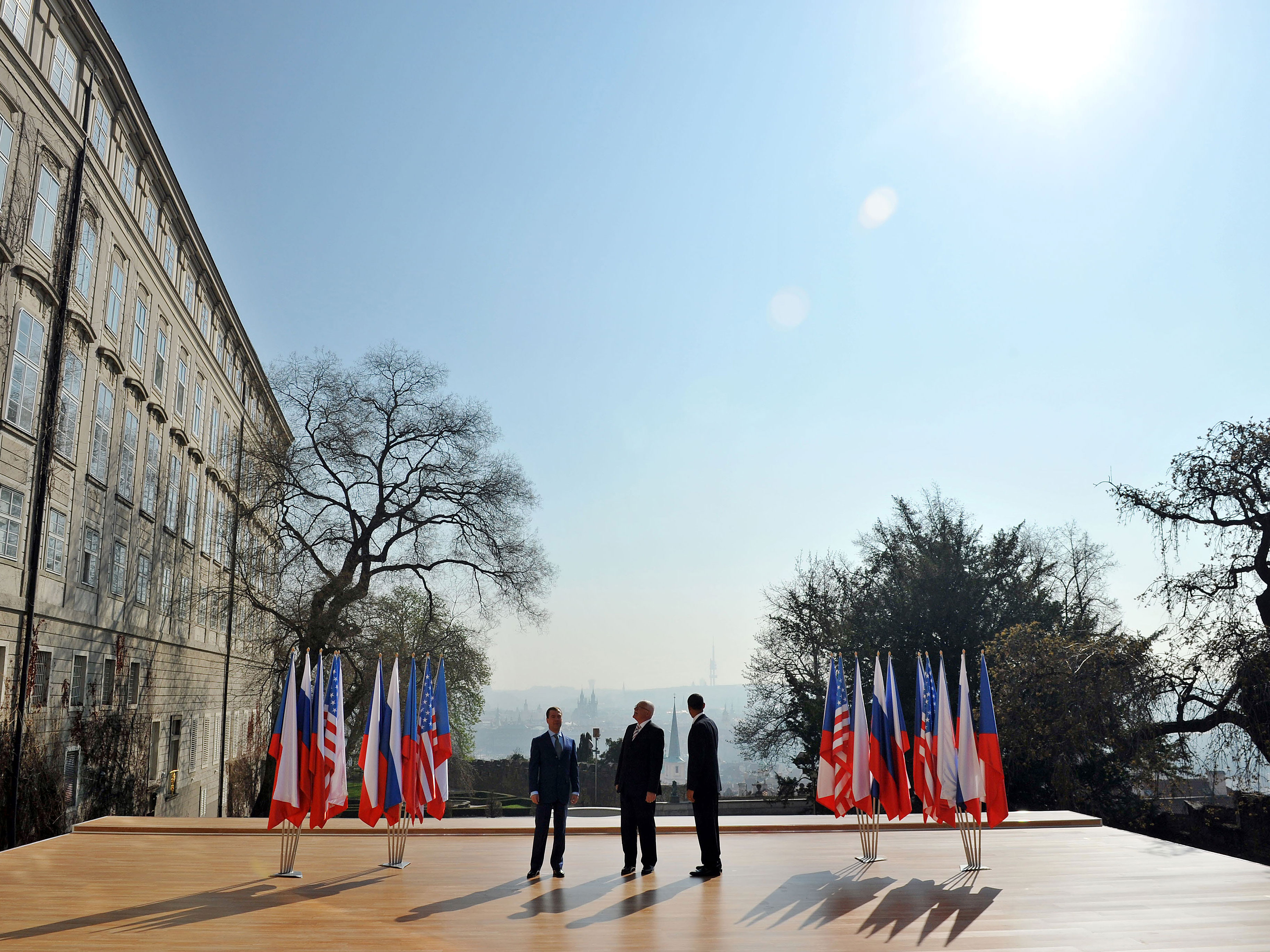 For more than a week, the United States and Russia have been basking in the glow of international praise for their commitment to eliminate thousands of nuclear warheads at an April 8 signing ceremony in Prague. But now, Washington, Moscow and three other original nuclear powers are facing an onslaught of criticism from developing countries as they detail their positions ahead of a major review conference next month on the 1970 Nuclear Non-Proliferation Treaty.

Algeria. Egypt, Kuwait, Libya, and Syria and others made it clear at a disarmament meeting at the U.N. General Assembly Monday that they would oppose a series of U.S.-backed measures, including a proposal to strengthen U.N. scrutiny of countries' nuclear energy programs, designed to rein in nuclear proliferators like North Korea and Iran. The May 3-28 nuclear review conference requires any final document be adopted by consensus, providing any state with veto power over any change to the nuclear treaty.

The U.N. event provided a preview of what is expected to be a highly acrimonious feud between the world's atomic powers and the developing world over nuclear rights and responsibilities. It will require some agile diplomatic skills to prevent it from undercutting U.S. President Barack Obama's bid to place the nuclear treaty at the center of his efforts to contain the spread of nuclear weapons.

"There is mistrust," said Egypt's U.N. ambassador, Maged A. Abdelaziz, who is serving as chairman of the 118-member Non-Aligned Movement. Speaking before the General Assembly debate entitled "Disarmament and World Security," the Egyptian envoy said the five major nuclear powers are seeking to impose new demands on non-nuclear powers while failing to fully live up to their own disarmament obligations, and permitting a special group of nations -- India, Israel, and Pakistan -- a free pass to produce nuclear weapons, without having to abide by the obligations of signatories to the NPT. "States outside the treaty are reaping the benefits of the treaty," he said.

Abdelaziz sought to turn the tables on the big powers, demanding that nuclear states submit themselves to U.N. inspections of their nuclear programs and commit to the total elimination of their atomic weapons by a certain date. He also insisted that progress be made on a "nuclear weapons free zone" in the Middle East, a move aimed at increasing pressure on Israel to subject its nuclear program to international inspection.

The Egyptian diplomat outlined the NAM's opposition to a series of Western-backed initiatives, including a proposal to punish countries that withdraw from the NPT and a plan to establish a U.N. fuel bank to supply nuclear non-nuclear states. In addition, he said NAM had "serious concerns" about U.N. Security Council Resolution 1887, promoted last September by Obama, which strengthens the 15-nation body's authority to confront states that fail to comply with their nuclear non-proliferation obligations. "We are not as non-nuclear states going to accept that each time there is progress in disarmament that we have to take more obligations on our side," said Abdelaziz.

The NPT sets out the basic nuclear bargain: The five original nuclear powers, Britain, China, France, Russia, and the United States, vowed to ultimately eliminate their arsenals in exchange for a commitment from other states not to join the nuclear arms race. In exchange, non-nuclear weapons states were given the right to develop peaceful nuclear power programs.

Developing countries, meanwhile, complain that the United States and other nuclear powers have failed to fulfill their side of the bargain. Rolf Ekeus, the Swedish former U.N. weapons inspector in Iraq, slammed France, Britain, and China for making no commitments to reduce their nuclear arsenals.

The nuclear conference scheduled for May marks the first major review of the treaty since 2005, which ended in failure. Arms control specialists have blamed the Bush administration, which sought to renege on disarmament obligations undertaken by previous U.S. administrations, and Iran, which secretly accelerated its nuclear enrichment program, for torpedoing the session. But they also said the United States' refusal to address Arab demands for progress on a nuclear weapons free zone in the Middle East poisoned the atmosphere. The Clinton administration had previously endorsed a 1995 commitment by U.N. members to work toward a nuclear free Middle East.

"Predictably, Egypt and other nonaligned states did not want to allow the repudiation of past NPT conference commitments," wrote analyst Daryl G. Kimball in the preface to a detailed guide to next month's conference.

Obama has sought to reinvigorate international support for the NPT. In a landmark speech on U.S. nuclear policy last year in Prague, he committed to working toward the total elimination of nuclear weapons. His administration has also recently concluded a Nuclear Posture Review, which includes assurances that it will not use nuclear arms against a non-nuclear state that is meeting its obligations under the NPT.

The United States, along with Britain, China, France, and Russia, has also agreed to consider participating in an international conference on a nuclear-free zone in the Middle East, according to a European diplomat. But those countries don't want to use the meeting to formally negotiate a treaty banning weapons in the Middle East, an approach advocated by Egypt. (Reuters first reported on the deal.)

Also Monday, Susan E. Rice, the U.S. ambassador to the United Nations, and Vitaly I. Churkin, Russia's U.N. envoy, put aside their wrangling over Iran sanctions for a moment to highlight the progress the nuclear superpowers have made in meeting their nuclear disarmament obligations.

Earlier this month, President Barack Obama and President Dmitri Medvedev signed a nuclear weapons treaty in Prague to replace the 1991 Strategic Arms Reduction Treaty. The new pact requires both sides reduce long-range nuclear warheads from 2,200 to 1,550 and cut launchers from 1,600 to 800.

Appearing together, Rice and Churkin urged other nuclear powers to follow their example. All nations "without exception, and first and foremost those that have nuclear arsenals, to join efforts with Russia and the United States in this field and to contribute actively to the disarmament process," said Churkin.

Rice sought to parlay the nuclear pact into a platform at the conference to increase pressure on other U.N. members to check their own nuclear ambitions and to step up pressure on Iran and North Korea to forswear nuclear weapons. But the United States and Russia remain far apart on how harshly Iran should be punished for flouting U.N. demands to halt its enrichment of uranium.

"America's commitment to the NPT is a cornerstone of our security strategy," Rice said. She said the United States and others "will work to reverse the spread of nuclear weapons and to build momentum for their eventual elimination. All nations must recognize that the nonproliferation regime is undermined if violators are allowed to act with impunity."

Rice cautioned that success at the conference "is not assured," but pledged to add a "constructive, flexible, and consensus-building voice" to the conference.

"But we cannot do it alone," she added. "We encourage all delegations to put aside dated arguments and build on today's momentum to make real progress on disarmament, nonproliferation, and the peaceful uses of nuclear energy."