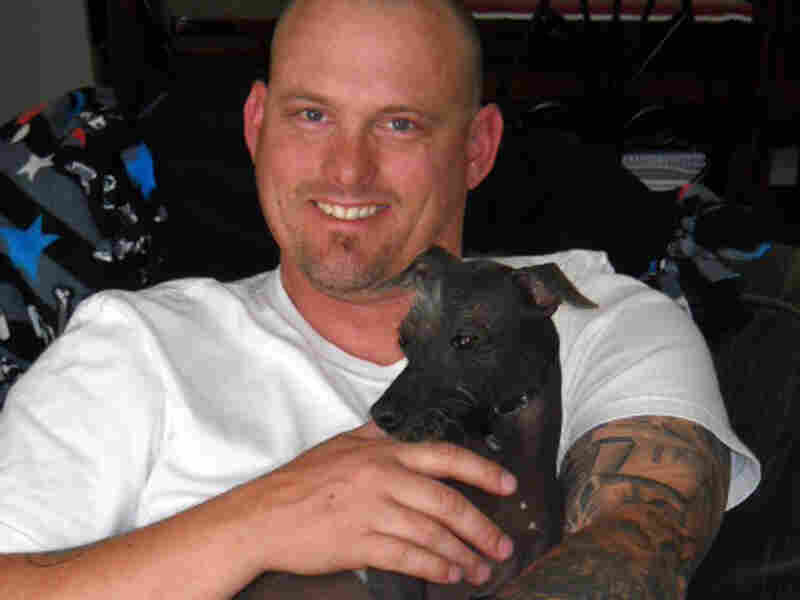 Leif Meisinger, a former Army gunner, says getting Spyder was one of the best things that ever happened to him. He credits his canine companion with helping to ease his PTSD. Gloria Hillard for NPR hide caption 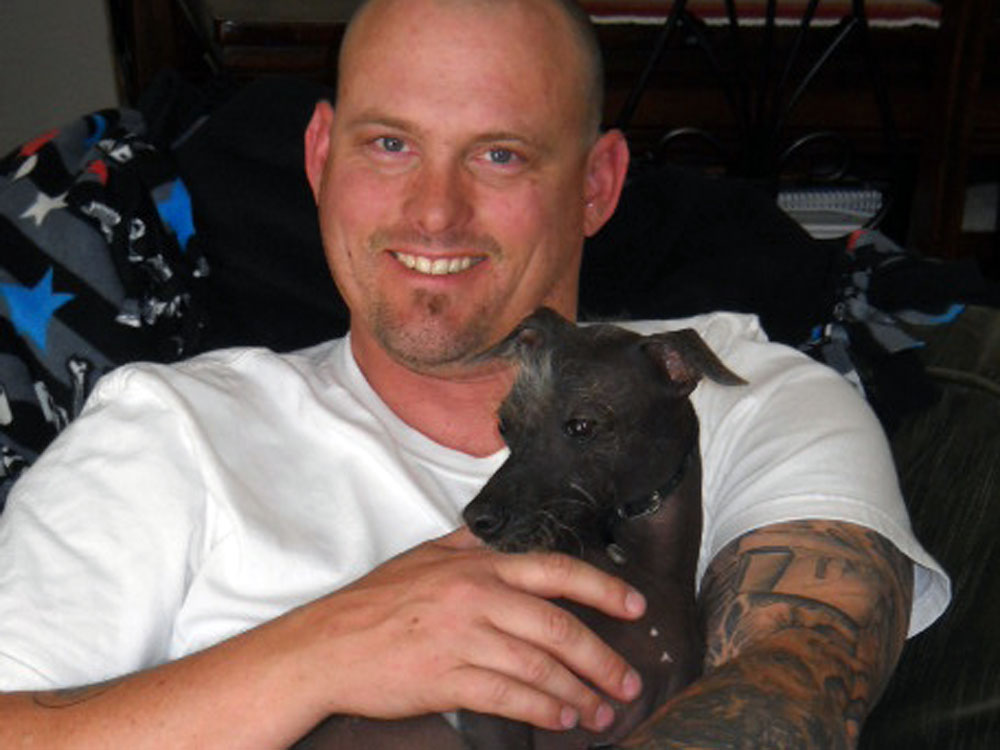 Leif Meisinger, a former Army gunner, says getting Spyder was one of the best things that ever happened to him. He credits his canine companion with helping to ease his PTSD.

Unwanted and abandoned dogs fill shelters nationwide, and not many will get a second chance. But, in California there's a new organization that is saving one dog at a time and, in the process, helping those who have served.

One of those people is Leif Meisinger, a combat veteran who still wears a military-style buzz cut. His arms are tapestries of colored ink, including a few tattoos he got in Iraq.

The 40-year-old former Army gunner says he has a mild traumatic brain injury after a roadside bomb blast and has been diagnosed with post-traumatic stress disorder.

"It was like I was back in Iraq again," he says. "I was up at night, and I would sleep during the day."

A few months ago, something in his life changed. Meisinger received a dog from Pets for Vets -- a Los Angeles-based organization that matches shelter dogs with veterans like Meisinger who are having a hard time re-entering civilian life.

"I love this dog," Meisinger says, "and … I've never really been an animal-type person."

The 215-pound soldier plays fetch with the 10-pound dog, Spyder.

"It's the greatest thing that ever could happen to me … getting the dog," he says. "Now I'm a social butterfly. Whereas before, I was in my house drinking, just dying … doing nothing."

The founder of Pets for Vets, Clarissa Black, says adopting an animal can change veterans' lives.

We've seen some of our veterans really feel connected to something. Without that connection to an animal or pet, they really did feel alone.

Richard Beam, a spokesman for the VA in Long Beach, Calif.

Although her job is extremely rewarding, there are hard parts, too, such as choosing dogs out of the many that need a home.

At Los Angeles County's high-kill animal shelter, Black looks for a retriever mix. As if reading her mind, dozens of dogs of all sizes try to get her attention.

"It's very hard to walk down and see all the animals looking at you and knowing they need a home as well," she says.

After volunteering in an animal therapy program at a Veterans Affairs hospital, the 27-year-old certified animal trainer saw a special need and started Pets for Vets. She's placed eight dogs since June.

"You can just see the months and years of stress melt away from the first moment that [the vets] see their dog," Black says.

She doesn't have much of a budget. A small band of volunteers and donations help cover her expenses to train the dogs as companion animals.

And for veterans with special emotional needs, Black, who has a degree in Animal Sciences from Cornell, says she teaches the dogs to recognize things like a panic attack by simulating the behavior herself. She then trains the dogs to react with a gentle nudge or kiss.

"It is a very good partner to group therapy or one-on-one therapy," says Richard Beam, a spokesman for the VA Medical Center in Long Beach, Calif., which has referred patients to the Pets for Vets program. "It's a perfect augmentation."

"We've seen some of our veterans really feel connected to something," he says, "whereas without that connection to an animal or a pet, they really did feel alone."

That was certainly true for Meisinger, who says he still participates in group therapy at the VA once a week. But he says it's Spyder that keeps him grounded on the other days.

"I'll be sitting there, and I have no idea what I'm thinking, I'm just staring at something, and all of a sudden he comes up and starts licking my face, and it's like 'Oh whoa' -- he pulls me back," Meisinger says. "He keeps me from going to that spot that you don't need to go to."