Accessibility links
Obama Says No 'Litmus Test' For Supreme Court Nominee The president said whoever replaces retiring Supreme Court Justice John Paul Stevens should interpret the Constitution "in a way that takes into account individual rights, and that includes women's rights." Obama said before meeting with four key senators to discuss the confirmation process that he hopes to nominate someone by the end of May. 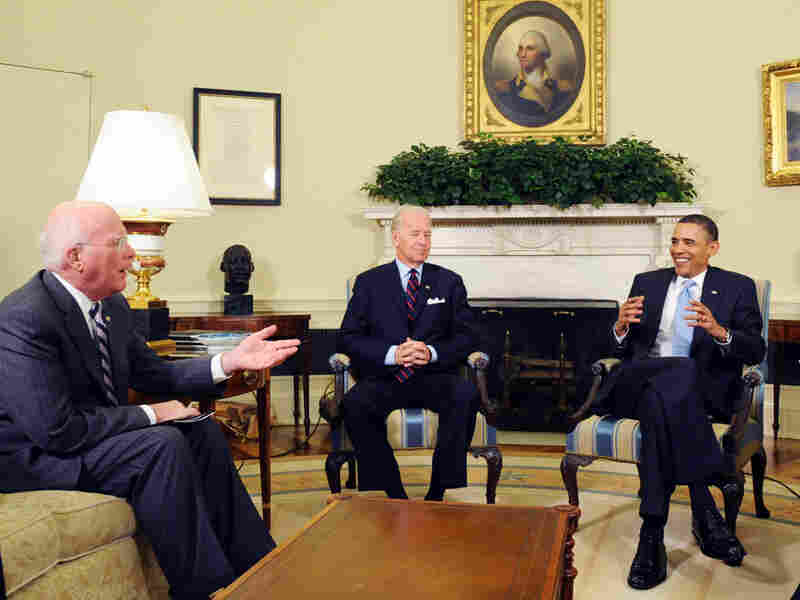 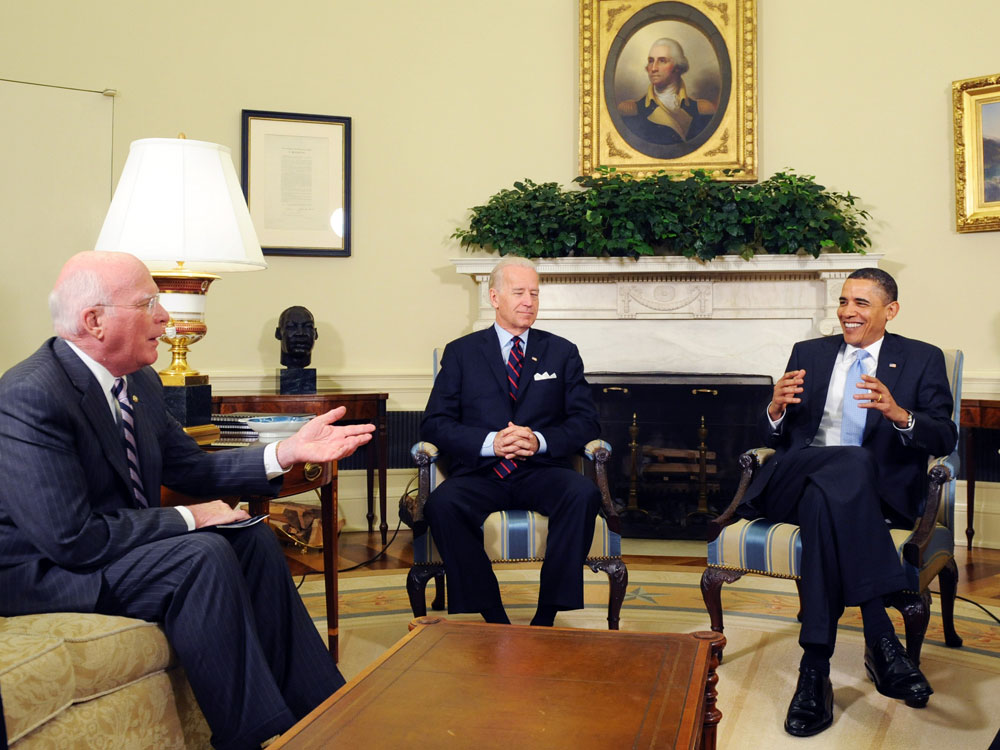 Vermont Democrat Patrick Leahy (left) was among four senators who met with President Obama and Vice President Biden on Wednesday in the Oval Office to discuss the Supreme Court confirmation process.

President Obama said Wednesday that he hopes to nominate someone to replace retiring Supreme Court Justice John Paul Stevens by the end of May at the latest.

"Last time, the nomination went up at the end of May," Obama said prior to an Oval Office meeting with four key senators to discuss the nomination and confirmation process. "We are certainly going to meet that deadline, and we hope maybe we can accelerate it a little bit so we have some additional time."

Obama also said there would be no "litmus test" on abortion. But, he added, "I want somebody who's going to be interpreting our Constitution in a way that takes into account individual rights, and that includes women's rights."

Judiciary ranking member Jeff Sessions of Alabama, who was among those who attended the meeting, said he would like to see a nominee who "is committed to faithfully follow the Constitution as it is written."

The Alabama Republican told NPR's Melissa Block that he was open to supporting a nominee who supported the Supreme Court's Roe v. Wade decision, which legalized abortion.

"I don't think that would be a disqualifier," Sessions said. "It may be a case that I may not agree with, but I think the nominee does have to have a commitment to the rule of law."

Sessions described the conversation as "a good meeting." He said Obama didn't name any names or commit to the kind of nominee he was looking at, "but indicated that some of the people he's considering are people he knows from previous reviews, and some were new to the process."

The president hosted a similar event a year ago before naming Sonia Sotomayor to replace David Souter on the high court.

Vice President Biden sat at Obama's side, with Reid and McConnell on one couch facing Leahy and Sessions on another.

The president reiterated his desire to see a new justice confirmed by the time the Senate leaves for August recess. He called it "very important" that the new justice be seated, staffed and ready for the fall Supreme Court session. Stevens is expected to leave the court this summer.

White House spokesman Robert Gibbs told reporters this week that the president's team is compiling a list of potential nominees but that "we’re not in the process of winnowing those names down."

Democrats have 59 votes in the Senate, which is more than enough to confirm whomever the president chooses as long as Republicans do not filibuster the nominee. There has been no successful filibuster of a Supreme Court nominee in recent history, but Republicans have not ruled out the option.