Accessibility links
Movie Review - 'Behind the Burly Q' - Peeping Back To The Last Days Of Burlesque Behind the Burly Q uses one-on-one interviews with onetime stars like Tempest Storm, Blaze Starr--nd Cand--Cotton — now grand--therly --terans — to revisit the history of burlesque.

Peeping Back To The Last Days Of Burlesque

Peeping Back To The Last Days Of Burlesque 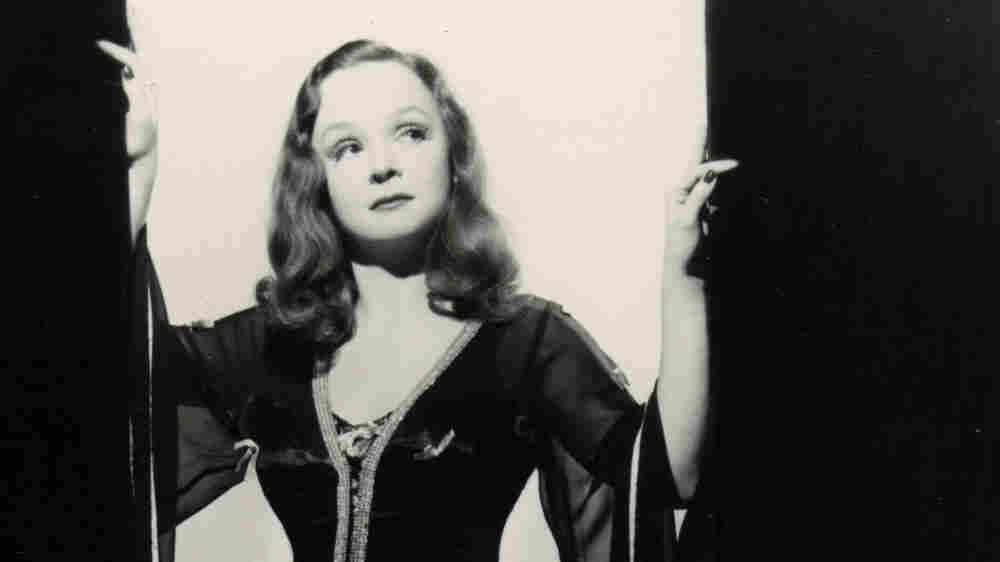 k<em>-A-Boo: <em>Behind the Burly Q tells the stories of burlesque dancers like Betty Rowland, who says she joined the trade to help support her family. At one point her act was so popular that she received 20 letters a day from fans. First Run Features hide caption

Behind the Burly Q

'A Variety Show, With A Little More Spice'

'Alan Alda On The Straight Man'

Behind the Burly Q takes you back -- it took me back, anyway -- to burlesque's last hurrah in the 1960s.

Vaudeville comics, jugglers, singers, and the form's other family-friendly variety-show trappings had by then migrated to television. But with Hays Production Code-era Hollywood still squeamish about nudity, burlesque houses featuring "live strip-tease" (emphasis firmly on the "tease") still drew crowds.

That it was mostly pretty tame by today's standards -- lots of body stockings and sequined tassels under evening gowns -- wasn't remotely evident to me as a kid. I remember family trips to see musicals in D.C.'s theater district, with my folks trying to distract me from posters for that less reputable stage down the block that featured busty, curvaceous, exotically named ecdysiasts -- April March, Blaze Starr and, most impressive to a 13-year-old me, Alexandra The Great 48. Sally Rand, who must have been in her 60s by then, still came to town to do her fan dance on occasion. Tempest Storm's blazing red hair was touted as an attraction all its own.

All those stars and dozens of their spiritual sisters -- Rita Grable, Taffy O'Neill, Candy Cotton, Dixie Evans ("the Marilyn Monroe of Burlesque") -- appear in Leslie Zemeckis' pleasantly scattered documentary, an engaging but almost criminally understated look at the history of burlesque. Behind the Burly Q traces that history all the way back to the early part of the 20th century, but doesn't really come into its own until Zemeckis can interview the stars themselves rather than their children. 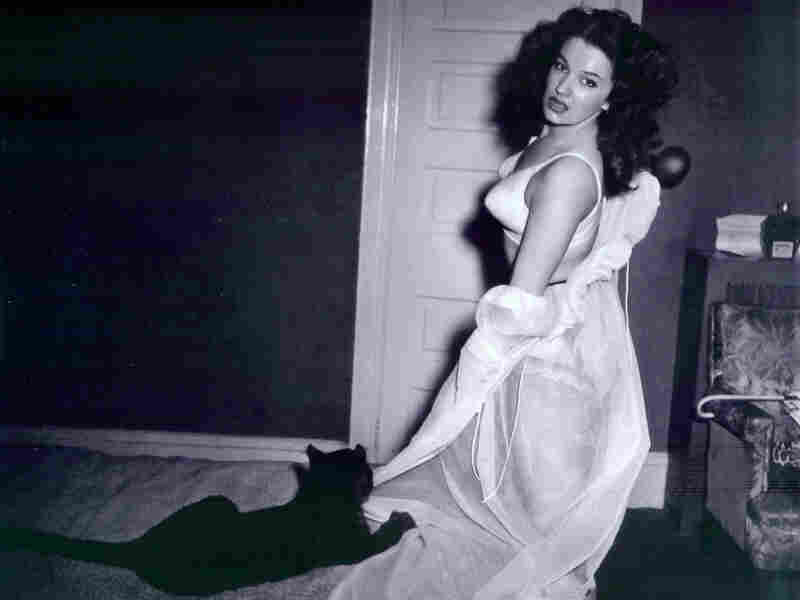 Putting The 'Tease' In 'Strip-Tease': Born Fannie Belle Fleming, dancer Blaze Starr was raised in poverty but grew up to become one of burlesque's biggest acts. She gained notoriety in the late 1950s with the discovery that she was having an affair with then-Louisiana Gov. Earl Long. First Run Features hide caption 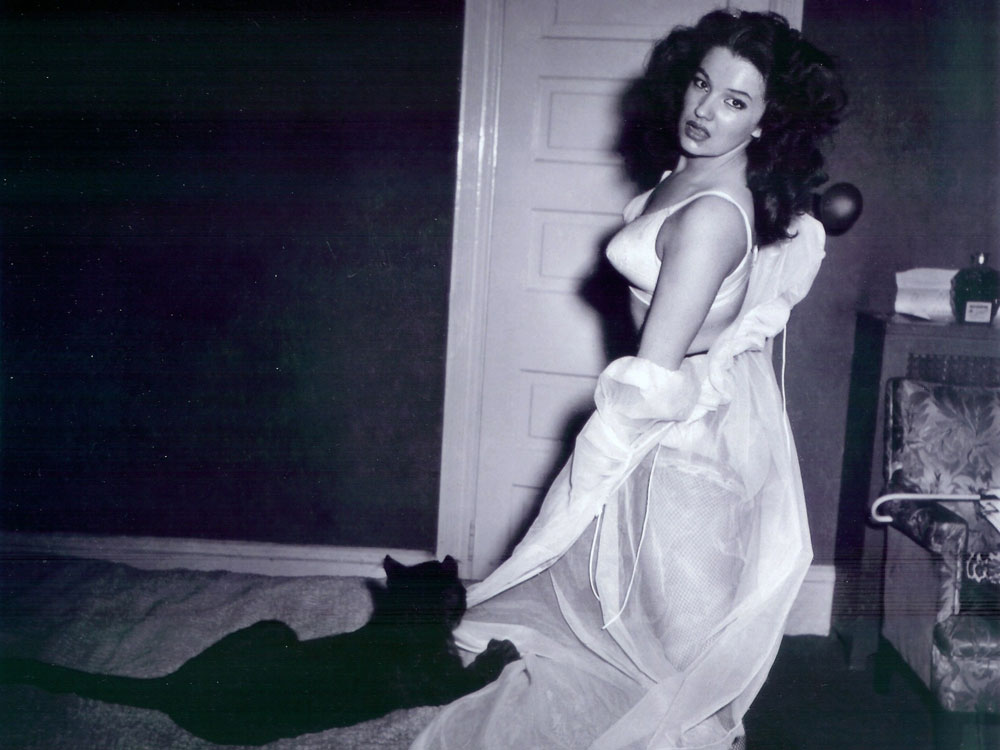 Putting The 'Tease' In 'Strip-Tease': Born Fannie Belle Fleming, dancer Blaze Starr was raised in poverty but grew up to become one of burlesque's biggest acts. She gained notoriety in the late 1950s with the discovery that she was having an affair with then-Louisiana Gov. Earl Long.

The early years are largely conjured by historians alongside the likes of Alan Alda (his dad, Robert Alda, was a celebrated burlesque-hall straight man before he moved to Broadway with Guys & Dolls, so he can recount stories from his childhood on the burlesque circuit). But so little footage was shot inside the old Burly Q houses that Zemeckis has to illustrate Alda's stories with shots of another straight man: Lou Costello, of Abbott-and fame.

Something similar happens with the later burlesque queens she interviews -- mostly demure and grandmotherly now, and almost none depicted in their primes except in posters and still photos. Grant them long memories and undimmed senses of humor; they trash Gypsy Rose Lee (their profession's biggest crossover star) and chat sweetly to the camera about escapades that must once have seemed plenty racy.

Lorraine Lee remembers dancing for Bonnie & Clyde. Tempest Storm meanders through an anecdote about having been JFK's lover. It all makes for a graciously subdued trip down the burlesque runway -- lots of talking heads, in a documentary that audiences will most likely be expecting to concentrate more on other parts of the body.

1. See UCF press release of July 11, 2005, by Tom Evelyn (http://www.wesh .com/news/14143574/detail.html?rss=orl&psp=news), stating that the Board “has not yet formally voted on whether to build the stadium.” Similarly, in a March 31, 2005, presentation to the UCF Board of Trustees by the stadium architects 360 Architecture, all permitting for the stadium was to be complete no earlier than July 2005, well after implementation of the 2004 building codes. “Code group: University of Central Florida didn’t adhere to drinking water rules,” Orlando Sentinel, September 22, 2007 (from http://www.water webster.com/BottledWater.htm, accessed August 10, 2008). See also Table 403.1 of the 2004 Florida Building Code, which states that stadiums (A-5 category buildings) must have one water fountain per 1000 occupants. The requirement seems to be the same in the 2001 Florida Plumbing Code, Table 403.1, chap. 4, p.4.1 (see http://www2.iccsafe.org/states/Florida2001/FL _Plumbing/FL_Plumbing.htm).

14. On its website (www.cei.org/about) the CEI describes itself as “a public interest group dedicated to free enterprise and limited government,” accessed December 10, 2009.

21. See, for example, Brita’s full-page ad in New York magazine on January 16, 1995, entitled “We’d like to clear up a few things about tap water” (22), or the Brita ad in the October 2003 issue of Ebony magazine describing their water pitcher that “turns tap water into drinking water” (146).

26. Written Testimony of Joseph K. Doss, President and CEO, International Bottled Water Association Before the Domestic Policy Subcommittee of the Oversight and Government Reform Committee of the United States House of Representatives. Hearing on “Assessing the Environmental Risks of the Water Bottling Industry’s Extraction of Groundwater,” Washington, D.C., December 12, 2007.