Accessibility links
Whitefield Brothers: A Dance Travelogue The German duo has been active since the early '90s, making dance music its members call "raw soul," though most would call it funk. On a new album, Earthology, the pair branches out into indigenous sounds. 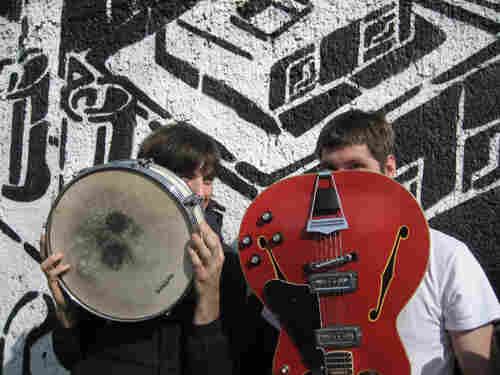 Earthology is a world-music pastiche that took Whitefield Brothers 15 years to assemble. courtesy of the artist hide caption

Whitefield Brothers are from Munich, and their real names are Jan and Max Weissenfeldt -- guitarist and drummer, respectively. They've recorded a lot under the name Poets of Rhythm, and they've been actively making dance music since the early '90s. But as Whitefield Brothers, they've been mainly known until now for a rough-sounding underground funk album called In the Raw.

Now, Whitefield Brothers have released a second album called Earthology, which opens up their funk to broader use. Just listen to "Reverse" and try to pin a genre on it. I dare you.

Earthology is a world-music pastiche that took Whitefield Brothers 15 years to assemble. Featuring mostly German musicians, it adds a few samples, selected non-Western instruments and plenty of guests. Yet no matter what flute or malletophone or horn section or rapper is providing flavor up top, all 13 tracks are anchored by bass and drums. These songs may not always be funk as that genre is loosely defined, but they're definitely funky. On the song "Taisho," most of the flavor is provided by the national instrument of Japan, a koto played by Masaru Nishimoto.

If you're a musician whose career is making club tracks, you can be happy just laying down dance beats. If you're an ethnomusicologist who spends his life seeking out indigenous sounds, they'll keep you thoroughly occupied. But for most of us, the fusion that the Whitefield Brothers achieve on Earthology represents the best of both worlds. It's a travelogue with roots you can feel in your gut, and it reminds you how various and unfathomable the world can be. My favorite tune on the album is "Breakin' Through," written by jazz pianist Mal Waldron. It's jazzy, yeah, but it also has a Middle Eastern feel I can't quite put my finger on. And I enjoy it even more as a result.