Accessibility links
Tracking Volcano Ash To Improve Flight Safety The eruption in Iceland has triggered an intense effort to improve our ability to detect volcanic ash clouds and forecast their movement in the atmosphere. Eruptions are surprisingly common. And more precise information about them could help reduce uncertainty about the threats they pose to air travel. 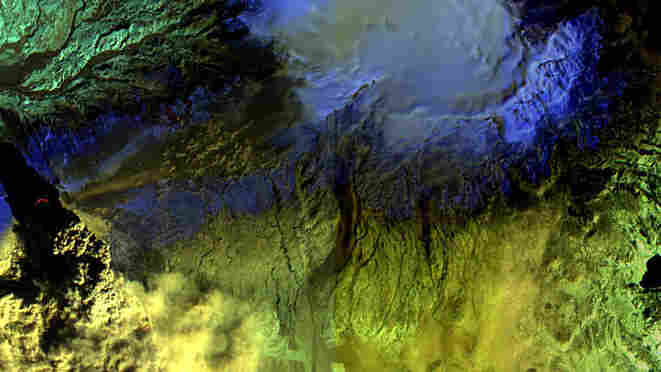 This infrared image shows ash spewing out of Iceland's Eyjafjallajokull volcano. It was taken April 17 by a NASA spacecraft. Hotter areas, shown in red, can be seen at the ash plume's base. NASA/JPL/EO-1 Mission/GSFC/Ashley Davies hide caption 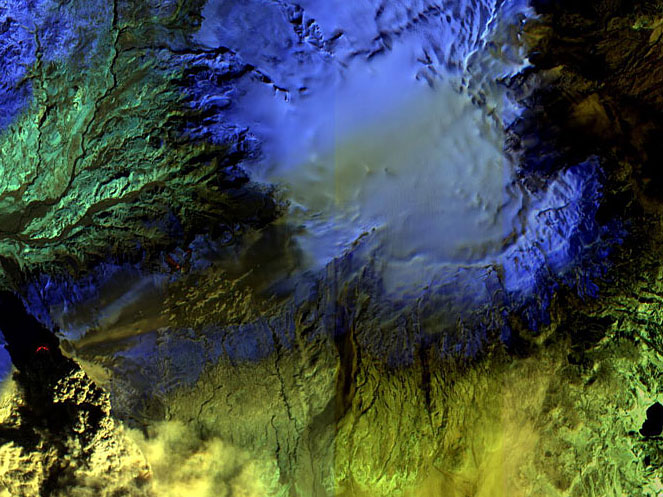 This infrared image shows ash spewing out of Iceland's Eyjafjallajokull volcano. It was taken April 17 by a NASA spacecraft. Hotter areas, shown in red, can be seen at the ash plume's base.

The eruption in Iceland has triggered an intense effort to improve our ability to detect volcanic ash clouds and forecast their movement in the atmosphere. Eruptions are surprisingly common, and more precise information about them could help reduce uncertainty about the threats they pose to air travel.

Mike Pavolonis at the National Oceanic and Atmospheric Administration says there's already been progress in the past decade or so. It wasn't so long ago that forecasters just eyeballed weather satellite photographs to track ash plumes.

"What we've gone to now more is turning that satellite data into quantitative information," he says. "Not just, is the ash cloud there, but how high is it? How much ash is there? Are they large particles, which fall out quicker than small particles?"

Seeing Inside The Clouds

The satellites now use infrared data, which means they can track clouds even in the dark. Satellites do a pretty good job of mapping the size and shape of a cloud. They can even determine its height within a mile or so. But seeing inside the clouds, or below them, is still a big challenge. Pavolonis says airlines would ideally like to know how clean the air is below the bulk of the cloud -- but that's tricky.

"Gravity is always working on it, and it's always falling," he says. "So you may always have some ash falling out, so flying under [the clouds] may never be the best option anyhow."

"It doesn't happen very often because it is dangerous and it is expensive to repair the plane after you go through it," Pavolonis says. 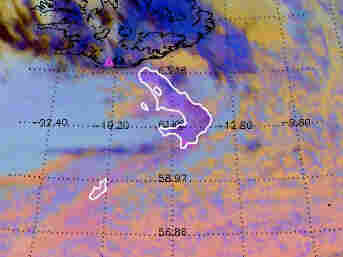 Click To Watch A Time-Lapse Over Six Days, Starting With The Eruption
toggle caption
Courtesy of Mike Pavolonis

There is another way to get at this information, though. Dave Winker is in charge of NASA's CALIPSO satellite, which can measure particles in the atmosphere using a technology called LIDAR, or Light Detection and Ranging.

"We send out pulses of laser light and that lets us measure the altitudes where aerosols and cloud layers are located -- including volcanic ash," Winker says.

LIDAR provides very detailed information, but it can only look straight down, so it can only see thin slices of an ash cloud -- and only during the brief periods when the satellite is directly overhead. Still, the information can help flesh out the expansive satellite pictures.

"This volcano in Iceland has emphasized that we have a lot of capabilities that we could bring to bear on an issue like this," Winker says, "but everything needs to be organized a little better than it is currently."

Part of the challenge is pulling information together from weather satellites, volcano observatories on the ground and science instruments in orbit.

"We need to get kind of Star Trekky, where you can move your hands over the keyboard and see the little puff over the planet's surface," says Marianne Guffanti at the U.S. Geological Survey. "We're moving in that direction, but we're not there yet."

She says we'd benefit from improvements across the board.

"Volcanologists need to really focus on giving the best description possible of what the emission is like," she says, "And we have groups working on that, believe me. Then you need to have really good wind data, and around the world, that quality varies. And you have to have good forecasts about what the winds are because that's what's going to disperse the cloud."

How Much Ash Can A Plane Stand?

Finally, Pavolonis says airlines would ultimately like to know what a safe concentration of ash would be for a jet airliner. And we simply don't know.

"Right now the policy is zero tolerance," he says. "And that is the best policy, not knowing anything else. If we can determine if there is a safe concentration, that will help more than anything, especially if it is a concentration we can observe from satellite."

They're working on all that, right now.