Accessibility links
China Sets Sights On Enhanced Air, Sea Power China is in the midst of an ambitious bid to modernize its military by the middle of this century. A key part of this effort is to downsize its army while beefing up its air force and navy, enabling China to project military force farther beyond its borders. 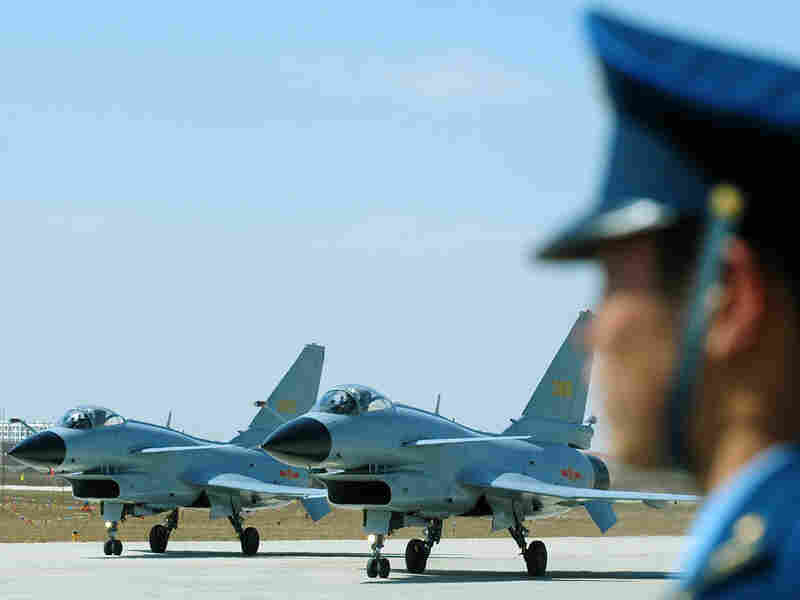 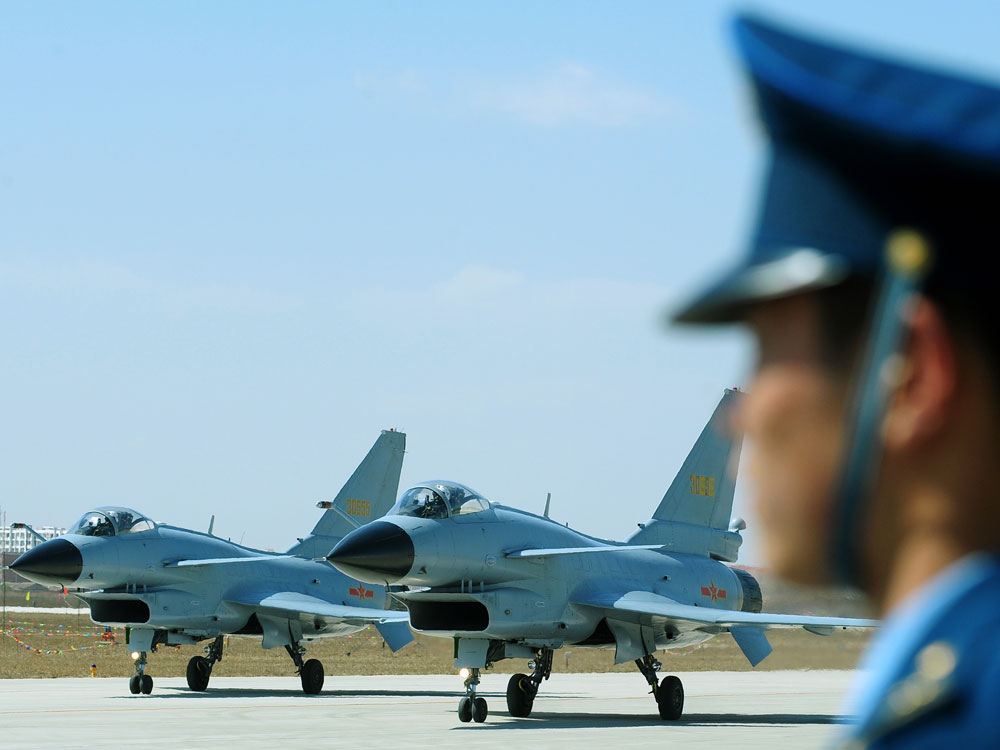 Chinese J-10 fighter jets pass an air force officer on the tarmac at the Yangcun airbase of the People's Liberation Army Air Force in Tianjin, southeast of Beijing, April 13, 2010.

China is in the midst of an ambitious bid to modernize its military by the middle of this century. A key part of this effort is to downsize its army -- the world's largest -- while beefing up its air force and navy. This will enable China to project military force farther beyond its borders.

In an effort aimed to show transparency in this process, China recently opened up Yangcun air base outside Beijing to military attaches and foreign journalists.

Pilots of the People's Liberation Army Air Force 24th fighter division barnstormed their fighter jets past the reviewing stand, before landing and taxiing down the runway.

The planes are J-10s, a Chinese-built, multi-role fighter made to be roughly comparable to the American F-16. Division Commander Yan Feng has logged more than 600 hours flying them. China plans to export the planes, and Yan makes what sounds like a sales pitch.

"As a pilot, I think the user interface is very good," he says. "It's highly maneuverable, has a good range, and its armaments and fire control systems are not bad. It's not like our old aircraft, which could easily go into a tailspin. Barring a major error, it's not easy to lose control of this plane."

China's air force and navy have benefited from two decades of double-digit increases in defense spending. And because the air force and navy cost more to equip than the army, they're getting a bigger share of the defense budget than ever.

"It's quite natural that we want to build up a streamlined military force, which has more focus on technologies rather than manpower," says Defense Ministry spokesman Senior Col. Huang Xueping.

The emphasis on air and sea power is part of a historical trend. Over the past century and a half, China has turned its attention from defending its land borders to its coastline. Roy Kamphausen, senior vice president of the National Bureau of Asian Research in Washington, D.C., notes that the collapse of the Soviet Union accelerated this shift.

"Once that was accomplished, the traditional threats that China has faced from its north and west largely dissipated," Kamphausen says. "That coincided with the growth of China's economy and a more outward-looking approach and thus a need to be more of a maritime power in all its dimensions."

It's quite natural that we want to build up a streamlined military force which has more focus on technologies rather than manpower.

To build up its air force and navy, China needs to reduce the size of its overall force. Xu Guangyu is a retired People's Liberation Army general, who is now with a government think tank called the China Arms Control and Disarmament Association.

He points out that China's total spending is second only to that of the U.S. But it's low as measured by per capita spending. The argument is analogous to what the government says: Although China's overall economy is the world's third-largest, its people are still poor on a per capita basis.

For the first time in about two decades, China's defense budget will grow at a single-digit clip -- roughly at the same rate as GDP growth. Xu explains that this is partly the effect of the economic recession, and partly to counter criticism that China is spending too much on military development.

"China's land-based army will continue to be the main force," he predicts. "Our naval and air power will mostly be used to enhance the combat effectiveness of our ground forces."

For now, Kamphausen says that China has invested very little in overseas bases and refueling capabilities that would really allow China to project force around the globe.

Kamphausen says analysts are encouraged because China can now project its force in support of international missions, such as patrolling for Somali pirates in the Gulf of Aden. But analysts are also concerned because China's newly acquired weapons could one day be used to target U.S. forces in the event of a conflict over Taiwan.