Accessibility links
Fungal Disease Spreads Through Pacific Northwest Climate change may be responsible for the spread of a virulent new strain of a mysterious fungal disease. First found on Vancouver Island, B.C., 11 years ago, Cryptococcus gattii is spreading south through Washington and Oregon, and several dozen people have died. 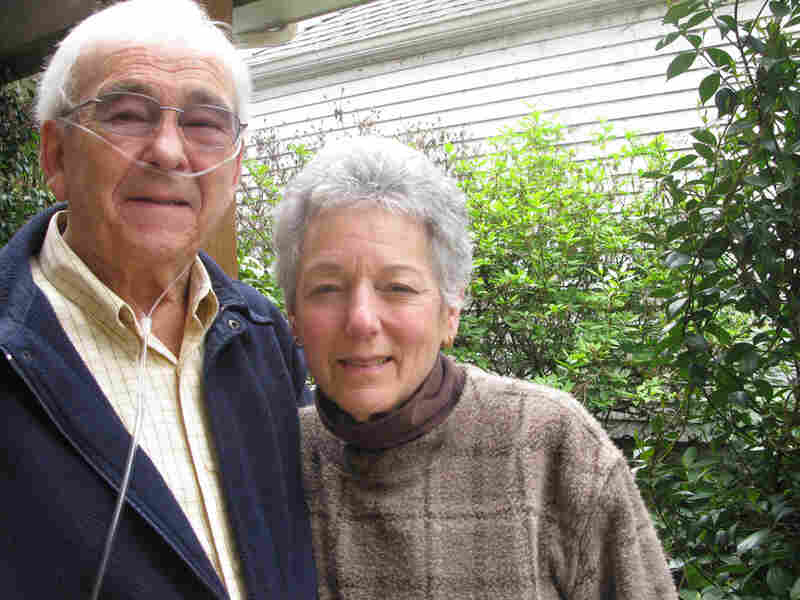 Bob and Joan Lewis at home in Portland, Ore. In the late fall of 2007, Bob Lewis was diagnosed with a rare fungal infection called Cryptococcus gattii. He recovered after intensive treatment but was left with complications. The disease emerged on Vancouver Island, British Columbia, 11 years ago and has spread south into Washington and Oregon. Jane Greenhalgh/NPR hide caption 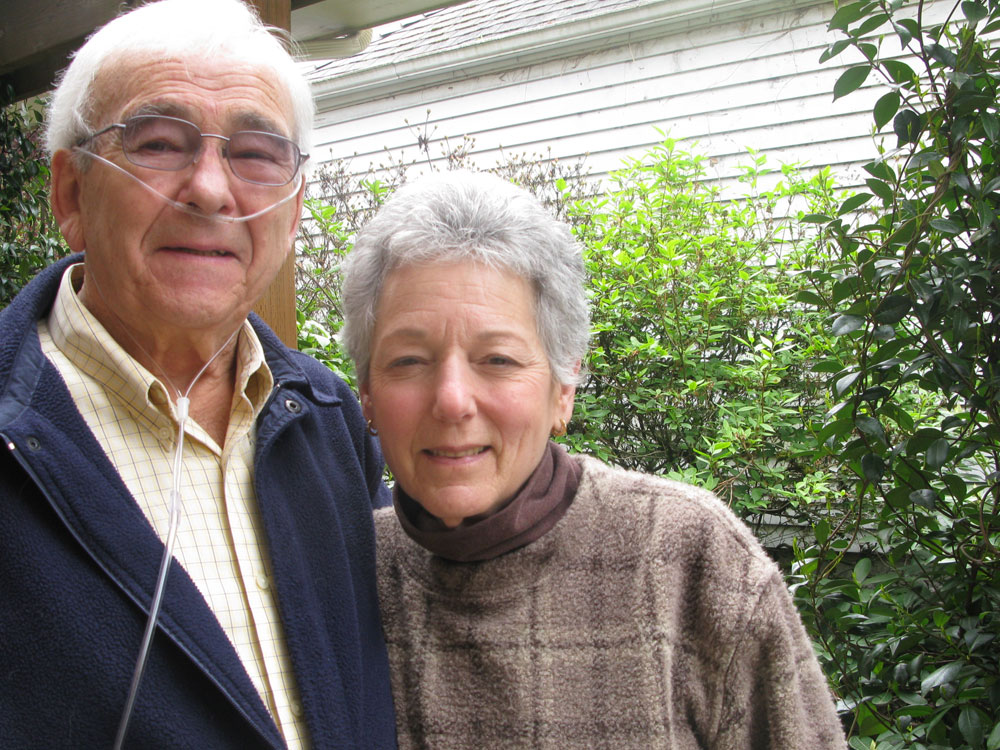 Bob and Joan Lewis at home in Portland, Ore. In the late fall of 2007, Bob Lewis was diagnosed with a rare fungal infection called Cryptococcus gattii. He recovered after intensive treatment but was left with complications. The disease emerged on Vancouver Island, British Columbia, 11 years ago and has spread south into Washington and Oregon.

A rare and dangerous fungal infection named Cryptococcus gattii has been quietly spreading from British Columbia southward to the U.S. Pacific Northwest. And it's changing as it goes.

Researchers have discovered that a unique strain of the bug has emerged recently in Oregon and already spread widely there, sickening humans and animals.

So far, over the past 11 years there have been about 220 cases reported in British Columbia. Since 2004, doctors in Washington and Oregon have reported about 50 cases. Among the total 270 cases, 40 people have died from overwhelming infections of the lungs and brain.

Public health officials aren't calling it a public health emergency. The fungus can't be spread from person to person, and there doesn't seem to be any prospect of an explosive epidemic. But they do want doctors to be on the lookout for cases, because early diagnosis and proper treatment is vital to prevent deaths.

The most striking thing about this fungus is that it's popping up and establishing itself far afield from its usual range -- possibly because of climate change.

"The disease was almost exclusively seen in tropical and subtropical areas of the world," says Dr. Julie Harris, a specialist in fungal diseases at the Centers for Disease Control and Prevention. The hot spots were Australia and Papua New Guinea, along with Egypt and parts of South America.

"So it was really surprising in 1999 to find that in this temperate climate of Vancouver Island, people were getting sick with Cryptococcus gattii," says Harris.

It's a cousin of another fungus that is all too familiar to doctors who treat people with AIDS and organ transplants. This other bug, called Cryptococcus neoformans, causes a hard-to-treat brain infection in people with weakened immune systems. Globally it infects almost a million people a year and kills more than 620,000.

Next to that, Cryptococcus gattii is a rare bird. Researchers don't know why people and animals in the Pacific Northwest are getting infected with this tropical fungus, and why only a few who get exposed to it get sick from it.

"This is an airborne infection," Harris says. "These spores are really, really small, and they can be carried in the air. And so hypothetically anyone can inhale them."

The fungus likes to hang out in forests -- on trees and in the surrounding soil. Many of those who have gotten sick have worked in jobs like forestry or construction. But many others haven't had such obvious exposures to lots of Cryptococcus gattii spores. 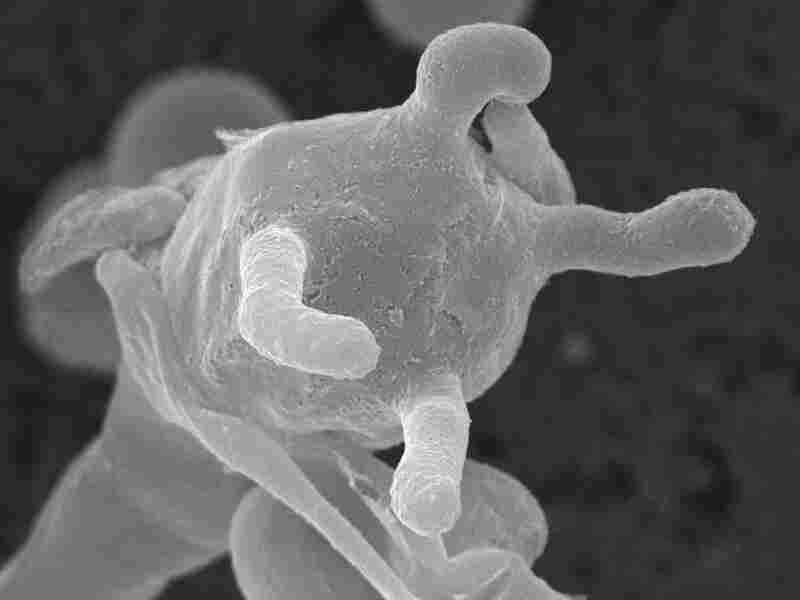 This is a scanning electron microscopy image of a C. gattii mating. Its shows the basidia structure with four spores emerging. Courtesy of Edmond Byrnes and Joseph Heitman/Duke Dept. of Molecular Genetics and Microbiology hide caption 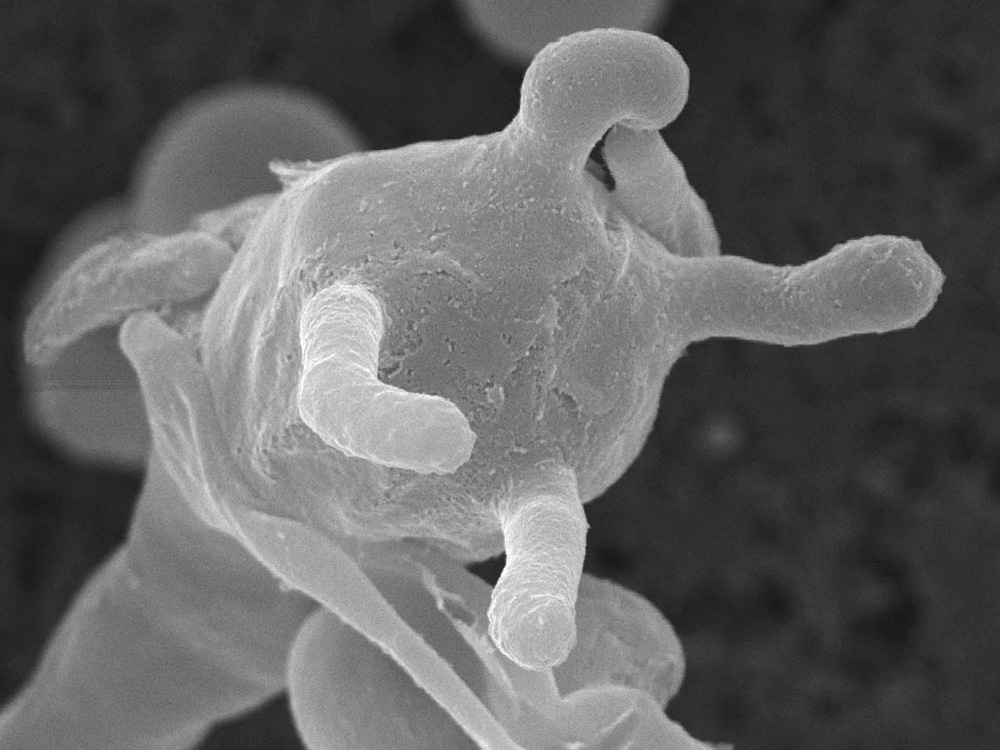 This is a scanning electron microscopy image of a C. gattii mating. Its shows the basidia structure with four spores emerging.

Courtesy of Edmond Byrnes and Joseph Heitman/Duke Dept. of Molecular Genetics and Microbiology

One of the first Vancouver Island cases, back in 2001, was a 45-year-old woman who had gone kayaking in a provincial park on the island's eastern shore. Over a period of months, her symptoms progressed from headaches and night sweats to a fulminant brain infection. By the time she died, in early 2002, she was blind and couldn't walk or speak.

Others have had only casual exposure to the woods -- or none at all. Cases have occurred among city dwellers and suburbanites as well as those who live in forested areas.

Researchers say most cases so far have had one risk factor or another. They have lived near a wooded area or been involved in activities that disturb the soil. They have had underlying diseases of the lung, or cancer. Forty-two percent have been taking a drug that suppresses immunity, such as corticosteroids. But more than one-quarter have had no identifiable risk factor.

So far nearly all cases have been in people ranging in age from 15 to 95. Very few children have gotten the fungus infection.

One of the problems in tracking cases is that the incubation period of a Cryptococcus gattii infection averages six months.

"This makes it very challenging for us to find out what the most important exposure was," Harris says. "Often we'll be able to tell if a patient was exposed, for example, to salmonella.

"They'll get sick the next day, and they can remember what they ate the day before. But with this disease, we're really challenged. It can take from two months up to a year for the disease to manifest itself."

Researchers have also been struck by the array of different animals species getting infected. Domestic cats and dogs lead the list, but there have been confirmed reports in sheep, goats and horses, in elk and llamas, even in porpoises and dolphins whose infected corpses have washed up on beaches.

Clearly this fungus is getting around. It can survive and spread in a wide range of environments.

It's also changing. Edmond Byrnes and his colleagues at Duke University have discovered a new strain of the fungus unique to Oregon. They've traced it to infections that have occurred in recent years across a swath of the state.

"The new strain has only been around for a few years, and it has already spread throughout much of Oregon," Byrnes says. "So I think it's likely that the organism is going to spread further into northern California."

The Duke researchers' report is in the online journal Public Library of Science Pathogens, published Thursday.

Byrnes says many experts think the spread of Cryptococcus gattii is a symptom of climate change.

"As we know, the climate's changing, and we don't understand how small changes in climate can affect all the organisms in the climate, and could allow certain organisms to start to grow better in that environment," he says.

One thing is certain: These tiny spores can cause devastating illness.

'Something Wrong With My Chest'

Bob Lewis of Portland, Ore., knows about that. He was a hearty outdoors type -- yachtsman, fly fisherman, swimmer -- when he got infected.

"In the spring of 2007, I felt I had something wrong with my chest," Lewis says. "I went to the doctor and they took X-rays and thought it was bronchitis."

Months passed and his infection got worse. Finally Lewis ended up at Oregon Health Sciences University, where infectious disease specialist Sarah West diagnosed him as one of Oregon's first cases of Cryptococcus gattii.

Lewis had never heard of it.

His lung infection, indolent for many months, suddenly started growing fast. His wife, Joan, says he was gasping for breath.

"At that point, our primary-care physician took me aside and said, 'Joan, if we can't get him breathing better on his own, he cannot survive more than three days,' " Joan Lewis says. "Of course, that was a tremendous shock."

A course of intravenous antibiotic didn't faze the fungus. Doctors argued about whether to perform surgery. Eventually they found expensive antibiotics that killed the fungus. But ever since, Bob Lewis has had to trail an oxygen tank, and his health has never been the same.

"My heart couldn't do the job it needed to do, so my left ventricle got enlarged," he says. "Then my kidneys developed a critical level of dysfunction. But I'm one of the lucky ones."

The Lewises weren't aware until this week that 39 cases of the disease have been reported in Oregon.

"That makes me want to cry, to hear those kind of numbers," Joan Lewis says. "This was a tragic and very, very frightening experience and I wouldn't wish it on anybody."

CDC officials say there's nothing individuals can do to minimize their risk. But they want physicians to be alert so patients don't have to wait as long as Bob Lewis did for diagnosis and treatment.