Accessibility links
Who Determines When Airways Are Safe From Ash? When three volcanoes in Alaska erupted in 2008 — one of them creating an ash cloud that spanned North America — flight disruptions were quite minor. That is a stark contrast to recent events in Europe, owing to both geography and air regulations. 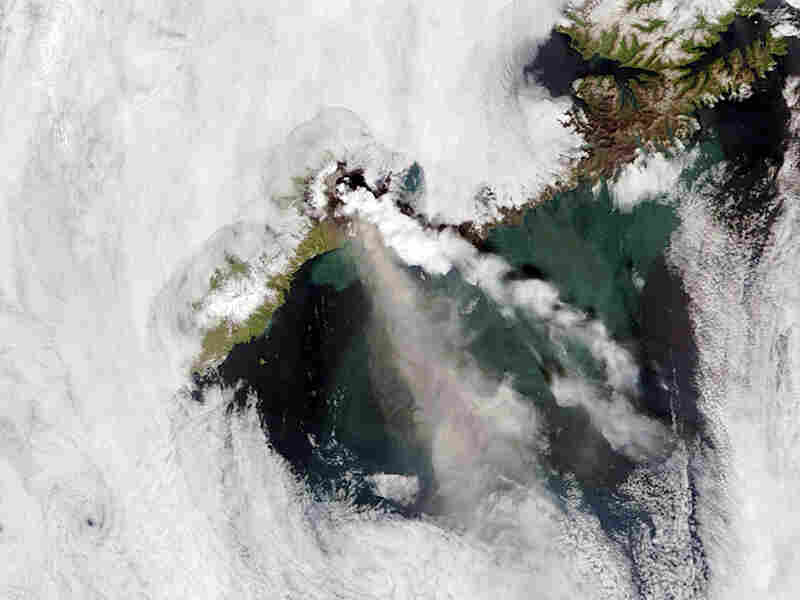 A satellite captured the erupting of the Okmok Caldera volcano on Umnak Island in Alaska in July 2008. The volcano spewed both steam and ash. NASA/AP hide caption 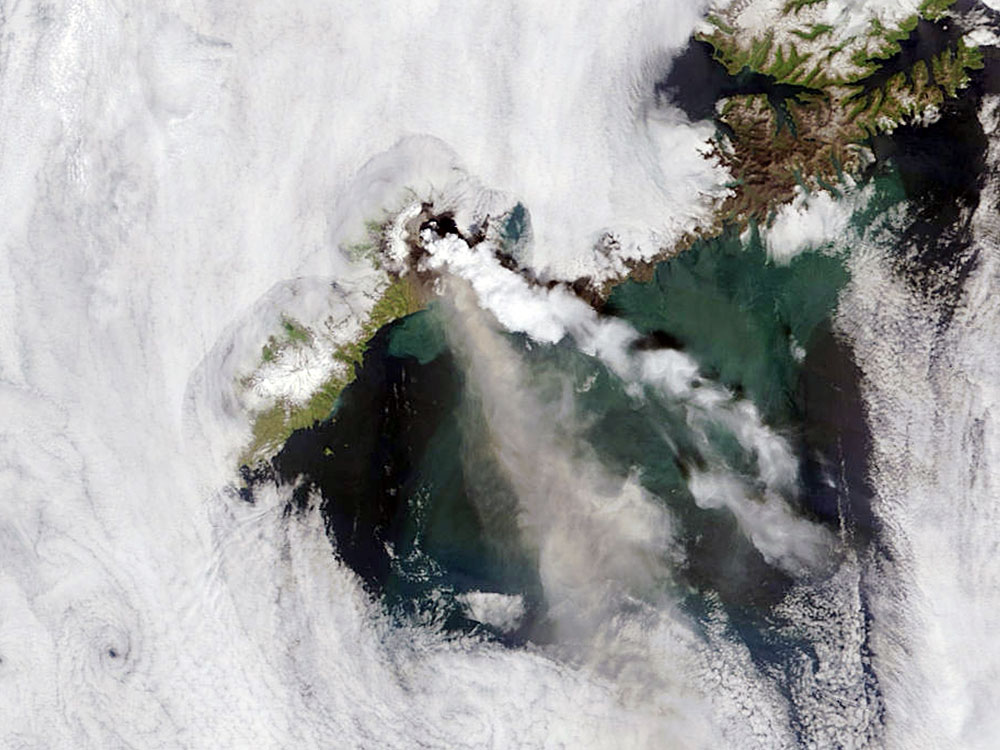 A satellite captured the erupting of the Okmok Caldera volcano on Umnak Island in Alaska in July 2008. The volcano spewed both steam and ash.

In the summer of 2008, three volcanoes in Alaska's Aleutian Islands blew their tops in quick succession. Kasatochi, Okmok and Cleveland all spewed giant ash plumes into the air. It wasn't big news at the time, but one of them created an ash cloud that stretched across North America. Flight disruptions were quite minor.

That's quite a contrast with what Europe just experienced. And the story illustrates differences of both geography and air regulations.

Chris Nye from the state of Alaska's Volcano Observatory says all three eruptions came without warning.

"The most surprising thing we got was a call from the [International] Space Station, saying, 'Do you know one of your volcanoes is erupting?' " Nye says. "And it was a clear blue day and they sent us beautiful photographs of the top of this plume. And we had to say, 'No, we don’t know it’s erupting' -- really embarrassing!"

Scientists needn't have been embarrassed, but the fact is, they are not able to keep tabs on every single volcano. And those eruptions were every bit as big as the one in Iceland.

Kasatochi's plume traveled all the way across North America to the East Coast, Nye says, "and then there are reports from the Kasatochi eruption of vibrant sunsets in Europe from that summer, so that's suggesting something very high in the atmosphere made it that far."

But the eruption was handled very differently in the U.S. compared with Europe's reaction to the Iceland volcano. In Europe, government authorities decide whether the skies are safe or not.

In contrast, in the U.S., data about ash clouds are given to the airlines, and it's mostly up to them to decide whether it's safe to fly or not. During the Alaska eruptions, the Federal Aviation Administration closed only small patches of airspace, immediately around the volcanoes.

Leonard Salinas, a flight dispatcher for United Airlines, says it wasn't so hard to cope with those eruptions.

"With more airspace [than is the case in Europe] we were able to route around, or completely miss the cloud," he says.

Some flights took big detours to the south, while others took polar routes to avoid the ash.

Salinas says the airlines follow a simple rule: zero tolerance for flying through ash. But they didn't quite live up to that standard during the Alaskan eruptions because forecasts weren't completely accurate.

"There were some inadvertent encounters" with ash, Salinas says. "That's because where the airspace was open, it closed very quickly when the upper air winds brought some ash across. That was not forecast in that area. So that was a nonforecast area, but that did occur."

He says as far as he knows, no damage resulted from those encounters. But since the 1980s, at least 15 planes have been damaged by ash along the busy North Pacific air routes, according to the U.S. Geological Survey. And planes can easily sustain tens of millions of dollars in damage. Pilots do their best to get out of those situations as quickly as possible, even if they can't see the cloud they're in.

"If the crew picks up any indication of a smell or something erratic with any type of interest, then we know there must be a problem and the crew will do everything possible to get out of that area," Salinas says.

Nobody has ever crashed as a result of flying through ash, but at least twice, jumbo jets have lost power in all four engines for a frightening few minutes.

With these close encounters as a backdrop, airlines are very motivated to avoid ash in the atmosphere. Salinas says the difference in Europe is that the airspace is very confined, so airlines have less leeway to find their own way around ash clouds. So the difference in approach, he says, reflects geography more than philosophy.