Accessibility links
The Fresh Air Interview - Sean Hayes Steps To Broadway in 'Promises' The comic actor, who played Jack on TV's Will and Grace, makes his Broadway debut in a revival of Neil Simon's musical Promises, Promises. He has also portrayed comedian Jerry Lewis in the made-for-TV movie Martin and Lewis and Jack Nicholson's valet in The Bucket List. 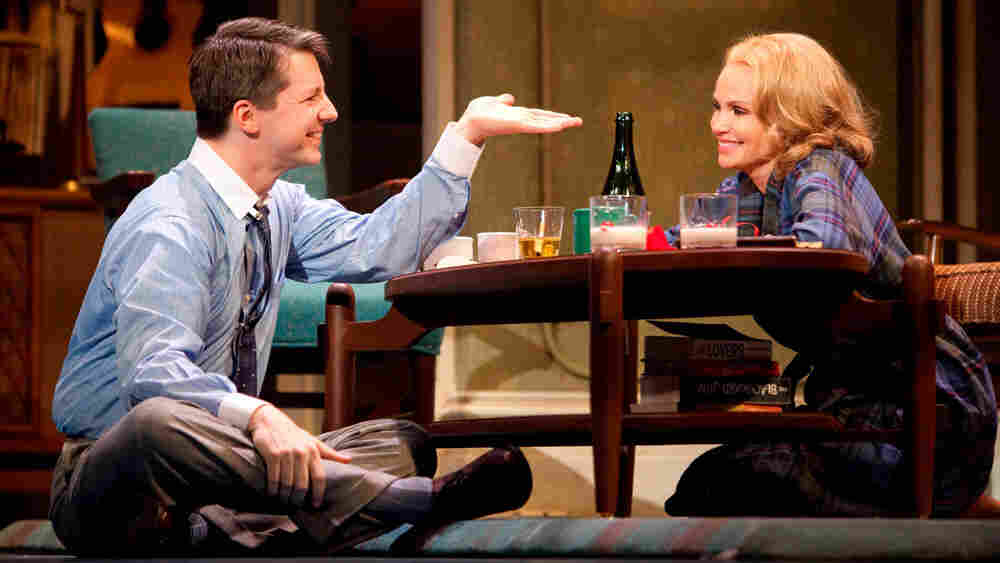 Sean Hayes and Kristin Chenoweth star in a new Broadway revival of Promises, Promises. Hayes says that he's had to overcome "a little added pressure and a little added fear" on stage because of his singing role. Joan Marcus hide caption

Three years ago, producers Craig Zadan and Neil Meron approached actor Sean Hayes, asking if he'd like to star in a Broadway revival of Promises, Promises. The actor, best known for TV's Will and Grace, was initially reluctant.

"My kind of thing to them was, 'I never want to do a revival of anything or replace anybody,' " he tells Terry Gross. "If I was going to do something, I wanted it to be new, even if it was going to fail miserably."

But then the producers in brought Rob Ashford, a Tony Award-winning choreographer and director whose credits include Thoroughly Modern Millie, A Connecticut Yankee and Victor/Victoria. And they cast Tony Award-winning actress Kristin Chenoweth, who starred in Wicked on Broadway and The West Wing on TV, to play the lead female role.

Then they approached Hayes again.

"They're very convincing," he admits. "And when I saw the elements -- Kristin Chenoweth, those guys, Rob Ashford -- it was an easy yes." 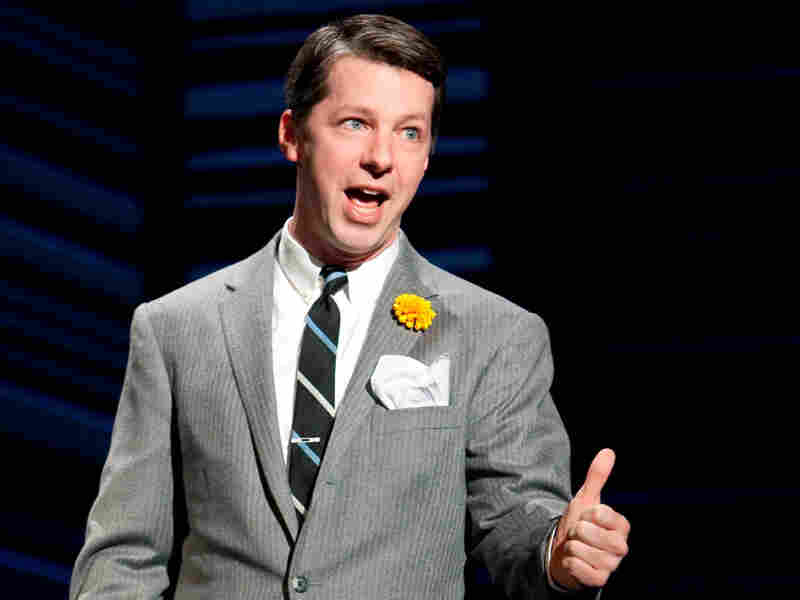 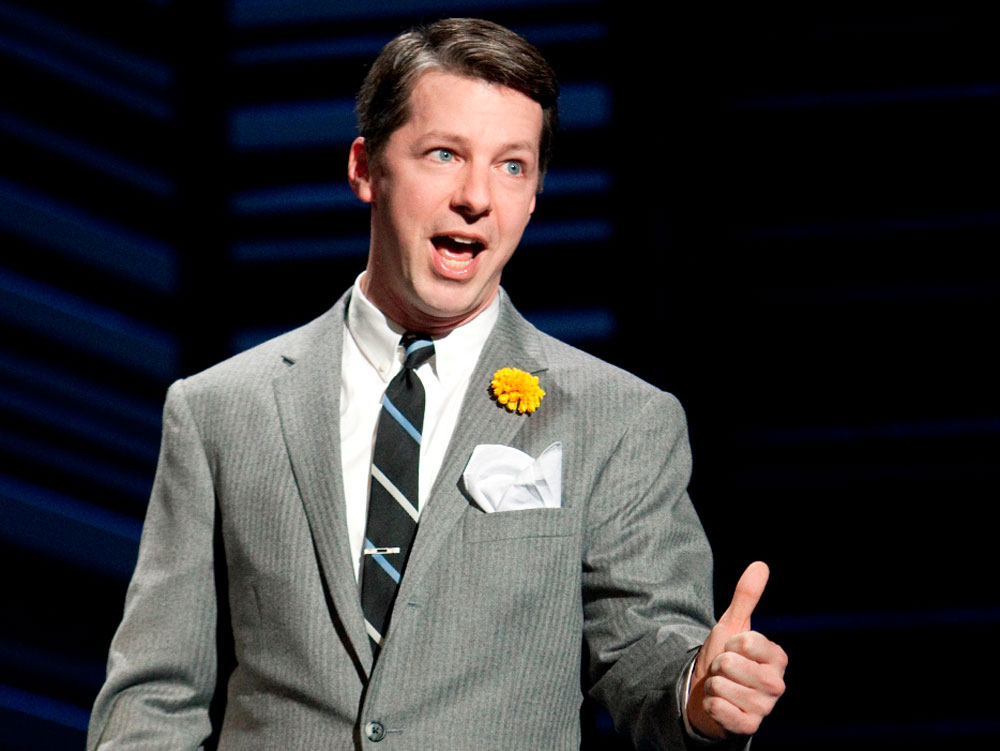 Hayes plays Chuck Baxter, an ambitious bachelor working for a life insurance company, in the Broadway revival of Promises, Promises.

In Promises, Promises, a '60s romp through corporate life in midtown Manhattan, Hayes plays Chuck Baxter, an insurance salesman whose boss uses his apartment for romantic liaisons. (The musical, with a book by Neil Simon and songs by Hal David and Burt Bacharach, is based on the 1960 film The Apartment.) Hayes says he wasn't particularly nervous about making his Broadway debut. But he did have to slightly psych himself up to sing the high notes, particularly in the title song.

Hayes' other credits include the indie film Billy's Hollywood Screen Kiss, the Morgan Freeman-Jack Nicholson vehicle The Bucket List, the made-for-TV movie Martin and Lewis, in which he played Jerry Lewis, and of course Will and Grace, the breakthrough TV sitcom for which he earned an Emmy Award, six Golden Globe nominations and four SAG awards.

On meeting Burt Bacharach (who composed the music for Promises, Promises)

"The first time he saw the show was opening night [April 25]. And it was a pleasure to finally meet him, and he was overjoyed, which was a great relief."

On why he wanted to pursue acting

"I fought it, because I grew up in a family of many brothers who won accolades for their sporting events and everything. And so I was a little embarrassed to pursue acting at such a young age. I thought it wasn't the macho thing to do, if I'm being completely honest. But I always kind of had this passion for it. And I would hang out in the theater as much as I could, because those people made me laugh the most. I used to watch Saturday Night Live constantly as a kid, and go, 'God, they look like they're having so much fun -- why am I not doing that?' And so, I think when I got to college, you discover who you are and find yourself more than you did before. You go 'Yeah, this feels right. This feels right to be amongst funny people and people who enjoy what they do."

On his first role in Billy's Hollywood Screen Kiss

"At the time, I'd just moved to Los Angeles because if you wanted to do TV or film, that's where you need to be. And I literally just auditioned and got the job two days later. My agent was like, 'Do you want to do this or not? It's no money. It's nothing.' And I was like, 'I'm not doing anything else.' So I did it, and then from that got Will and Grace.

On playing Jack on Will and Grace

"At the beginning of Will and Grace, I played Jack as the funny next-door-neighbor type, as we've seen in the past. And I thought that was my role. I didn't really play into the gay part as much -- the stereotypical gay part. And I have to say, the critics -- for not being that educated about the gay lifestyle -- I think pegged Jack as the flamboyant, extremely gay character because they didn't know what else to call him. [They were thinking], 'If Will is seemingly straight-acting, oh then Jack must be very feminine and flamboyant.' Whereas I wasn't playing him as feminine, because I know a lot of gay guys who are extremely feminine -- kind of like the Carson Kressley type from Queer Eye for the Straight Guy, or like Christian Siriano from Project Runway, those snapping kind of girlie -- that to me was stereotypical gay. The very feminine gay guy. Now, as the show went on, I started tapping into more of that to try to play to the critics. To play more opposite of the Will character. To create more extremes of the two people. But if you didn't label Jack as gay, he would have just been the funny next-door neighbor who had a lot of energy the way Jim Carrey, Robin Williams, Marty Short -- any of these guys did. It's kind of fascinating to me."

On coming out publicly recently in The Advocate

Terry Gross: "Right before Promises, Promises, opened, you did an interview with The Advocate in which you acknowledged you are gay. Previously, you'd declined to talk about that, saying the less people knew about your personal life, the more open-minded they could be about each role that you played. I was wondering like, why now?"

Sean Hayes: "Um, so we wouldn't have to talk about it."

Terry Gross: "And here I am talking about it. Is that your point?"

Sean Hayes: "Yeah. Because there's nothing relevant about someone's sexuality to what they do for a living."

Terry Gross: "But what's relevant to me is that your first big roles, both in Billy's Hollywood Screen Kiss and in Will and Grace, were as gay characters. And I think probably for a lot of young gay people in particular, it's great to have young gay characters on-screen, because not until recently were there any."

Sean Hayes: "Yeah, well Billy Crystal in the '70s, and ... there are tons. There are tons of examples, but -- yes, no, I think any positive that has come out of me playing gay characters on TV or film is amazing, and a wonderful byproduct of what I've done. And if it's helped anybody, then my life is complete, because that's a wonderful thing."