Accessibility links
A Life Without Fear: Dealing With Williams Syndrome Isabelle, 9, was born with a rare genetic disorder that, among other things, means she is biologically incapable of not trusting people. Her pathological trust of everyone has made for some serious challenges in raising her, but Isabelle's parents say there are also rewards to a child with boundless love and trust. 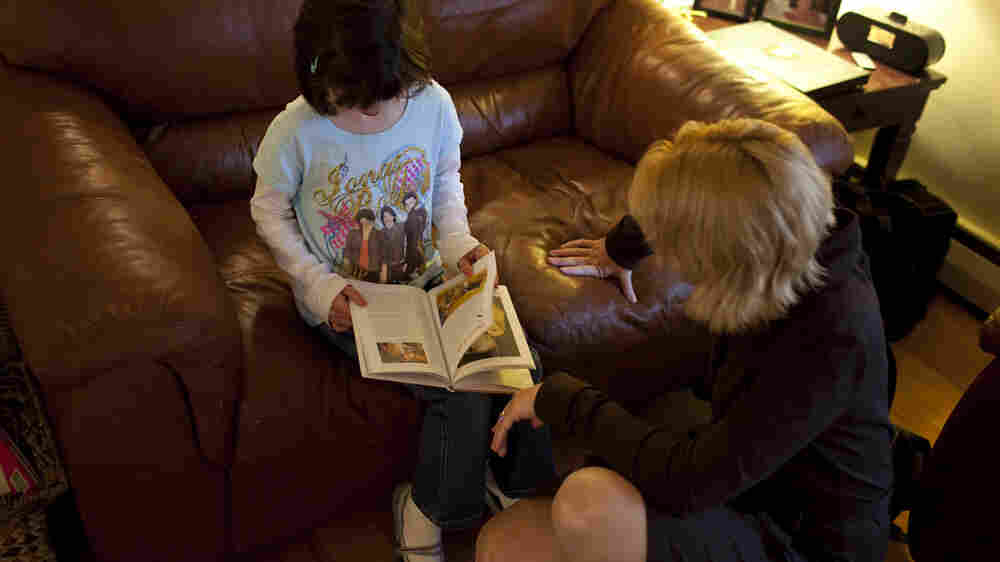 The drama class had just gotten out, and everybody was standing around talking when Jessica noticed her 9-year-old, Isabelle, making her way over to an elderly woman Jessica had never seen. The woman was neatly dressed, most likely just a well-meaning suburban grandmother who had come to retrieve a grandchild on behalf of an over-extended parent, most likely a perfectly harmless person.

Isabelle, as she usually did, exchanged hellos and struck up a conversation. It was the usual post-drama-class conversation until about two minutes in. Then Isabelle dropped the bomb.

"Will you take me? Can I go home with you?" Jessica heard Isabelle plead.

Jessica's daughter, Isabelle, has Williams syndrome, a genetic disorder with a number of symptoms. Children with Williams are often physically small and frequently have developmental delays. But also, kids and adults with Williams love people, and they are literally pathologically trusting. They have no social fear. Researchers theorize that this is probably because of a problem in their limbic system, the part of the brain that regulates emotion. There appears to be a disregulation in one of the chemicals (oxytocin) that signals when to trust and when to distrust.

This means that it is essentially biologically impossible for kids like Isabelle to distrust. (NPR is not using full names in this story for privacy and safety reasons.)

"They don't have that kind of evolutionary thing that other kids have, that little twinge of anxiety like, 'Who is this person? What should I do here?' " Jessica explains. "They just don't have it. She just doesn't have that ... early-warning system."

For Jessica, there are good and bad things about parenting a child with this kind of personality.

For instance, when Isabelle was younger, she was chronically happy. She smiled at anything. She loved everyone: family, friends, strangers. She reached for them all, and, in return, everyone loved her. Strangers would stop Jessica to tell about how adorably loving Isabelle was.

In those days, Jessica says, she and her family were more or less tolerant of Isabelle's trusting and loving nature. "We would try to restrain her, but it was somewhat half-heartedly, because we didn't want to embarrass her by calling her on the carpet about how open she was," Jessica says.

The Danger Of Unconditional Trust

But as Isabelle got older, the negative side of her trusting nature began to play a larger role. A typical example happened a couple of years ago, when Jessica and her family were spending the day at the beach. Isabelle had been begging Jessica to go to Dairy Queen, and Jessica had been putting her off. Then Isabelle overheard a lady just down the beach. 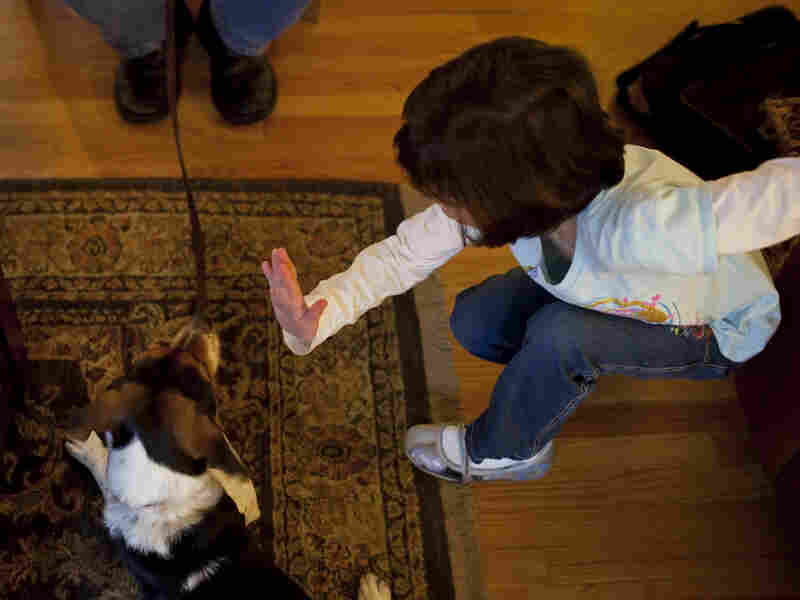 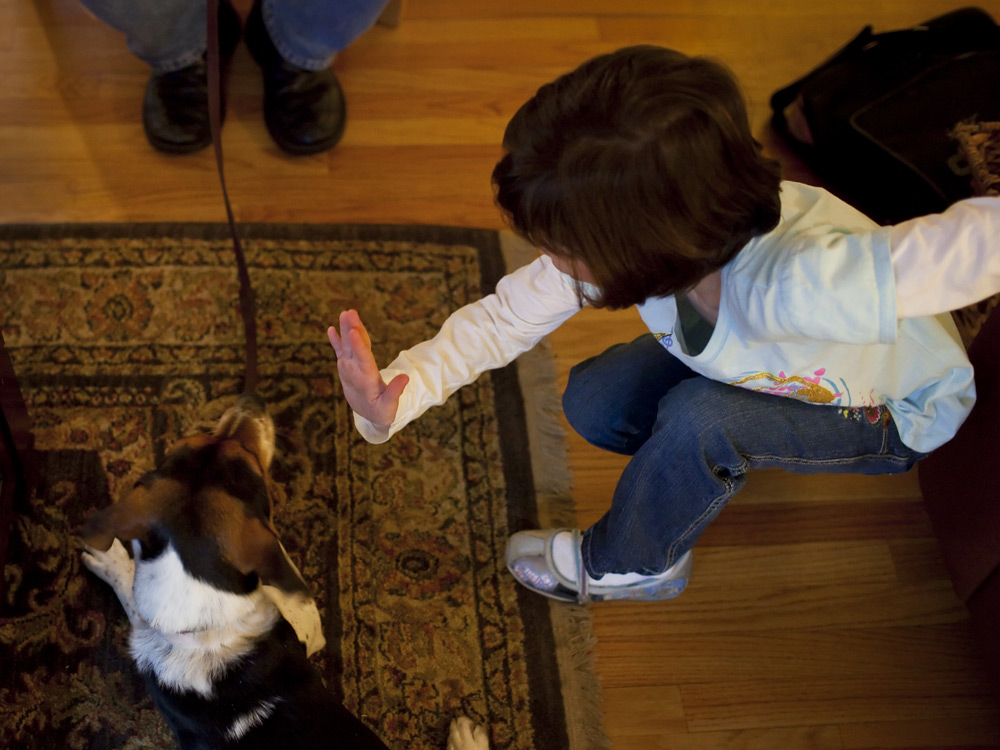 Isabelle practices training the family dog, "Betsy," with her dad.

"She was telling her kids, 'OK, let's go to the Dairy Queen,' " Jessica says. "And so Isabelle went over and got into the lady's van, got in the back seat, buckled up and was waiting to be taken to Dairy Queen with that family."

Jessica had no idea what had happened to Isabelle and was frantically searching for her when the driver of the van approached her and explained that she had been starting her car when she looked up and saw Isabelle's face in the rearview mirror.

"She said, 'I am a stranger, you know!' " Jessica says. Essentially, the woman blamed Jessica for not keeping closer watch on her daughter -- for neglecting to teach her the importance of not getting into a car with someone she didn’t know. But the reality could not be more different. "It's like, 'My friend, you have no idea,' " Jessica says.

"She's not allowed to go to the bathroom alone at her school, because there have been numerous instances of girls with Williams syndrome being molested at school when they were alone in the hallway," Jessica says. "And these are like middle class type schools. So it's a very real problem. And, you know, I'd rather her be overly safe than be on CNN."

Raising A Child With Williams Syndrome

Jessica spoke with me for over an hour in the family's home in their woodsy, suburban neighborhood while we waited for her three children to come home from school. Then, just after I turned off my recorder to take a break, I felt two small arms circle my neck from behind. It was Isabelle. She had crept in from school and was giving me a hug.

I turned around, and quite suddenly, the room was filled with questions. Who was I? What was I doing here? Which TV show did I like? Did I know the Muppets?

Then Isabelle took my microphone in her hands. She had decided to sing me a song:

When Isabelle speaks, she has a slight nasal slur. She also has some cognitive issues. Though she goes to a regular school and sits in a regular third-grade class, her attention is very jumpy, and she needs aids to help her.

These cognitive issues make Jessica's job more difficult. Jessica has decided that the most important thing for her to do is to teach Isabelle how to distrust. For years, that has been her life project -- a battle pitched against biology itself.

Jessica and her husband have made Isabelle books about how to behave around strangers. They have rented videos, they have bought educational toys. They have modeled the right behaviors, constructed sticker charts and employed every other trick they could possibly think of. But distrust, it seems, is almost impossible to teach their child. Sometimes Isabelle manages to remember not to tell perfect strangers that she loves them. Mostly, she doesn't.

But Jessica is determined. "We just have to restart every time," she says. "It's just what we have to do."

It's what they have to do, Jessica reasons, because she won't be around to protect her daughter forever. And though Isabelle trusts the world completely, the world is not a place worthy of complete trust.

Even in their current life, Jessica says, there are moments when she realizes that she's just an instant away from something terrible.

"We live a very sheltered life, but I can think of times when we were at the pool and I turn around to talk to someone, and I see her practically sitting on some man's lap at the pool, and he looks very uncomfortable," Jessica says. "And I just think: This is not good."

Unconditional Love, And A Mother's Worry

Fortunately, Jessica says, the experts tell her it will eventually get better. She needs to just keep at it. One day, they tell her, Isabelle will be able to learn not to feel distrust, per se, but to master a set of algorithms that will allow her to safely navigate the world. She will learn, for example, not to get into a car with a stranger if she has become lost or disoriented, but to ask some person in a uniform for help instead.

In the meantime, Jessica says there are plenty of rewards to this life -- a life with a child with boundless love and trust.

In fact, late in the afternoon on the day I visited, everyone in the family gathered in the kitchen to eat dinner. Isabelle, who loves music, decided to play a CD.

The CD player stuttered then came to life, and Isabelle approached her father.

"Will you dance with me, my sweetie?" she asked.

Her father picked her up in his arms. He spun her round and round.

When The 'Trust Hormone' Is Out Of Balance April 22, 2010
Scientists Intrigued By Hormone Spray For Autism Feb. 16, 2010
Inhalation of Childbirth Hormone Bolsters Trust June 2, 2005