Accessibility links
YouTube Pulls Hitler 'Downfall' Parodies Downfall, a German film about Adolf Hitler, has spawned dozens of video parodies on everything from Michael Jackson to the iPad. Users add new subtitles for a scene in the film and then upload the videos to YouTube. The movie's producer is claiming copyright infringement. 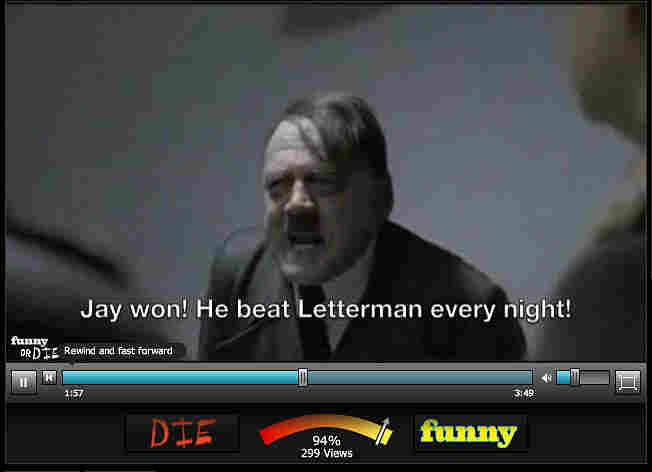 Hitler parodies, like this one in which an actor plays Hitler seething after hearing Leno ousted Conan on The Tonight Show, are appearing on other sites. Screen shot from http://www.funnyordie.com hide caption 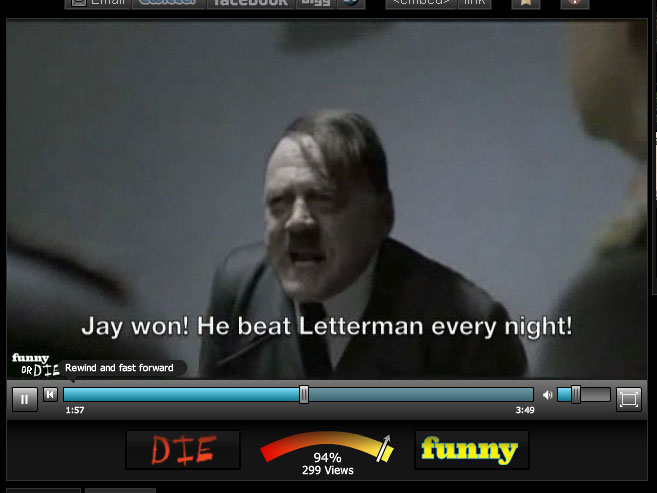 Hitler parodies, like this one in which an actor plays Hitler seething after hearing Leno ousted Conan on The Tonight Show, are appearing on other sites.

Adolf Hitler isn't a funny subject. But for the past couple of years there's been a series of popular parodies on YouTube that use a grim scene from a German drama about Hitler's last days and turn it into caustic satire. The parodies have been incredibly popular, but then all of a sudden they started to disappear. Fans say they are a victim of a misguided copyright enforcement system on YouTube.

The popular parodies use a scene from an Academy Award-nominated film called Downfall, in which Hitler, played by Bruno Ganz, is told bad news about the German defenses. A tired, nervous-looking officer tells the Fuhrer the truth, and Hitler goes on an angry rant.

If you don't understand the German -- and most Americans don't -- you read the subtitles. That's where the fun happens. People add their own subtitles. In one recent version Hitler gets told that the new iPad can't multitask.

Hitler rants about its lack of Flash, lousy AT&T service, the name that suggests a feminine hygiene product. Using this scene the subtitles have had Hitler ranting about everything from Kanye West's behavior on the MTV awards to Patti LuPone winning a Tony.

Millions of people have seen at least one version. Then a couple of days ago, the videos started to disappear.

YouTube's Aaron Zamost says it has more than 1,000 content owners using the system.

"We're scanning every user upload against a reference database of over 3 million files," he says.

The content ID system was a response by the Google-owned YouTube to complaints by big media companies that people were stealing their content when they put it up on YouTube. Zamost says the system also lets content owners keep up their clips and put ads next to them so they can make money.

"We tried to build a tool that allows rights holders to manage the use of their content by users but that also gives them, say, an option to make money from it," he says.

Would It Hold In Court?

That may be great for content owners, but it may not be in line with copyright law.

Corynne McSherry, an attorney with the Electronic Frontier Foundation, explains how fair use works: It lets people use a film clip or a paragraph from an article or a piece of music if they are creating commentary or satire.

McSherry has seen many of the Downfall parodies.

"All the ones that I've seen are very strong fair use cases and so they're not infringing, and they shouldn't be taken down. But via this filter system they are taken down virtually automatically," she says.

Hitler parodies are appearing on other sites, including one that makes fun of Constantin Films. YouTube's Zamost says that the people who put their parodies on YouTube can appeal and have them put back up.

Then, if Constantin Films wants to take them down it will have to sue. And if McSherry is right, the company is not likely to win in a U.S. court.