Accessibility links
Mike Gravel Fights for War on Drugs, Gay Marriage The taxi cab driver-turned-U.S. senator talks about his bid for the White House and shares his thoughts on where his competitors, specifically Sen. Barack Obama, fall short. He boldly speaks out on the war on drugs, among other topics. 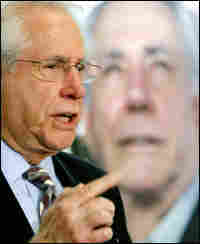 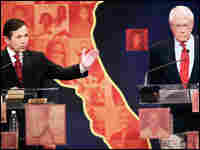 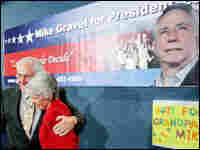 The former Alaska senator poses for photos with his wife, Whitney, after announcing his bid in 2006 for the Democrats' nomination in the presidential race. Getty Images hide caption

Former U.S. senator and Democratic presidential hopeful Mike Gravel is making a name for himself on the campaign trail. His candid, tough-as-nails, no-nonsense style of persuasion is known to stir whispers and trigger a snicker or two at presidential forums. But as the war in Iraq takes center stage as a discussion topic, the taxi cab driver-turned-senator focuses on another expensive and deadly U.S. battle: the war on drugs.

According to Gravel, other candidates are dropping the ball, including Illinois Sen. Barack Obama.

"He's a black man who says he's concerned about poverty. ... The war on drugs causes more poverty than anything else in this country I can think of," Gravel argues.

When asked how he would remedy substance-abuse problems that plague communities across the nation, the grandfather of four says he would start with the "decriminalization" of marijuana and by treating drug addiction as a public health problem, not a criminal problem.

Gravel's dramatic return to politics after what he calls a generation of being "out of circulation" seems to mirror his well-documented early career as a public servant to the residents of Alaska. The author and former military intelligence official was famous for rocking the boat during his 12 years in the Senate, from 1969 to '81. During that time, he was a leading opponent of the Vietnam War and carried out a nearly five-month-long one-man filibuster to end the military draft. He was rebuked by the U.S. Supreme Court for reading a lengthy portion of a controversial document known as the Pentagon Papers into the Congressional Record for public knowledge.

Playing hardball in the crowded race for the White House requires the same stamina that Gravel exhibited in his early years in Washington – and he's now in his late 70s. He says he hopes to convince the American people that he's got more than a few good years left in him.

And he's still taking on tough issues – such as same-sex marriage.

"Marriage is a commitment between two human beings and love. ...What the world needs is a lot more love, and that's what they [homosexuals] are talking about. For me, it's a civil rights issue."

Hear the full interview by clicking the "Listen" button in the upper left corner of this page.