Accessibility links
Investigators Find Design Flaw in Collapsed Bridge Federal investigators find a design flaw while probing the deadly collapse of a Minneapolis bridge. The discovery is raising questions about the safety of bridges all over the nation. 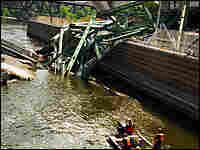 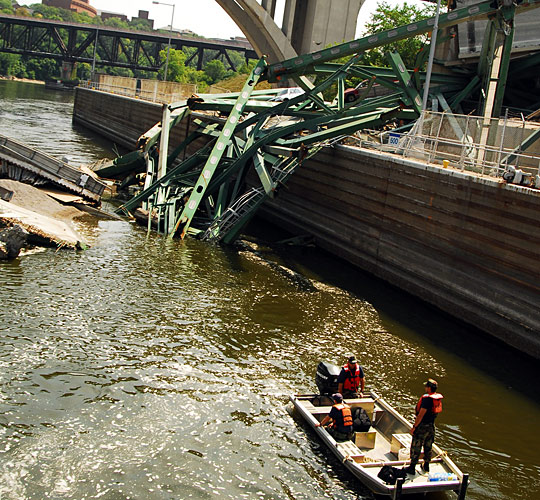 Investigators have raised concerns about the safety of bridges all over the country after finding a design flaw while probing the deadly collapse of a Minneapolis bridge.

Federal transportation officials are calling on states to be aware of the stress placed on bridges after National Transportation Safety Board investigators discovered problems with the steel plates that connected the steel beams of the Interstate 35 West bridge.

"Given the questions being raised by the NTSB, it is vital that states remain mindful of the extra weight construction projects place on bridges," U.S. Transportation Secretary Mary Peters said Wednesday.

An 18-person crew was working on the I-35W bridge when it collapsed last week during evening rush hour, killing at least five people and injuring about 100.

Helicopter observations found several "tensile fractures" in the superstructure on the north side of the bridge, but nothing that appeared to show where the collapse began. Investigators were verifying loads and stresses on the beams, as well as materials in the plates, the NTSB said.

NTSB investigators are also looking into reports of that the bridge was wobbling before the Aug. 1 collapse.

The company that was doing the construction work, Progressive Contractors Inc., rejected a report that a worker noticed unusual swaying of the bridge in the days before its collapse. The company said it did not believe any of its work contributed to the bridge failure but hadn't responded directly to claims of wobbling.

"We have now met with every single worker who was on the bridge when it collapsed," Tom Sloan, vice president of the company's bridge division, said in a news release Wednesday. "None of them observed or reported any unusual swaying."

Officials of the Minnesota Department of Transportation wouldn't comment on the significance of the gussets in the bridge's collapse.

Even as the federal warning was issued, Navy divers continued probing the wreckage of the collapsed bridge for bodies, and officials said they expected removal of heavy debris to begin later than expected to give the divers more time.

At the dive site, two large cranes were ready to go. But they sat idle as divers returned to the water doing "a very meticulous, hand-over-hand search of the scene," said their spokesman, Senior Chief Dave Nagle.

Navy and FBI dive teams are trying to go deeper into the debris of the bridge than the local dive teams that have been working since the Aug. 1 collapse, police Capt. Mike Martin said. He expects it to be at least a week before cranes start regularly hauling out large pieces of debris.

The FBI team had to abandon using the larger of its two unmanned submarines. The remote controlled vehicle - equipped with a camera, sonar, lights and a grabbing arm - was too big to maneuver amid the unstable, twisted bridge wreckage and vehicles in the cloudy water, agent Paul McCabe said Wednesday.

Instead, FBI divers will try their smaller sub, a shoe-box-size vehicle equipped only with lights and a camera. It is more difficult for the sub to navigate the Mississippi River's stiff river currents because of the sub's smaller thrusters. The water where the divers are working ranges from 2 to 14 feet deep.

Debris removal had been expected to begin this week. The State Patrol said 88 vehicles have been located at the collapse site, including those in the Mississippi River.