Accessibility links
An Electric Motorcycle Meets A Harley Woman Electric bicycles are cool, but how about electric motorcycles? They're silent, fast and environmentally friendly. But do they really stand a chance of replacing the traditional gasoline-powered motorcycle? We put one to the ultimate test. 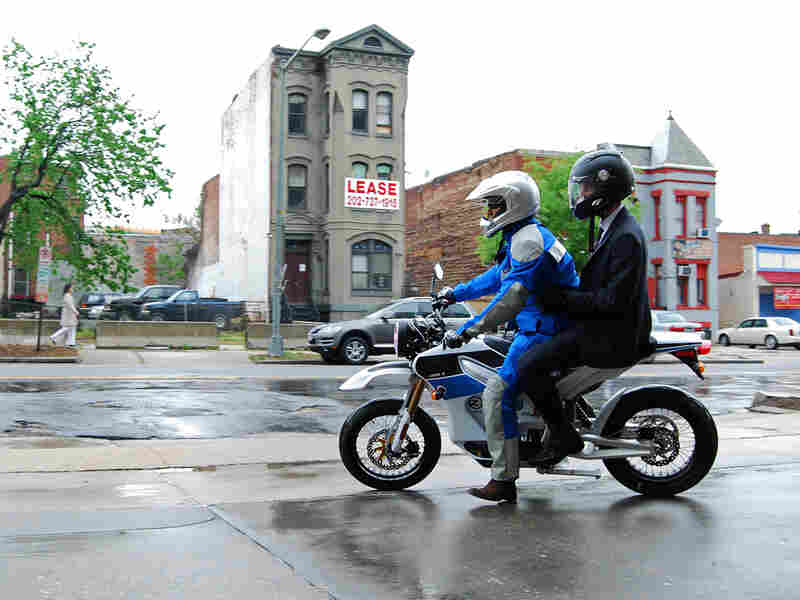 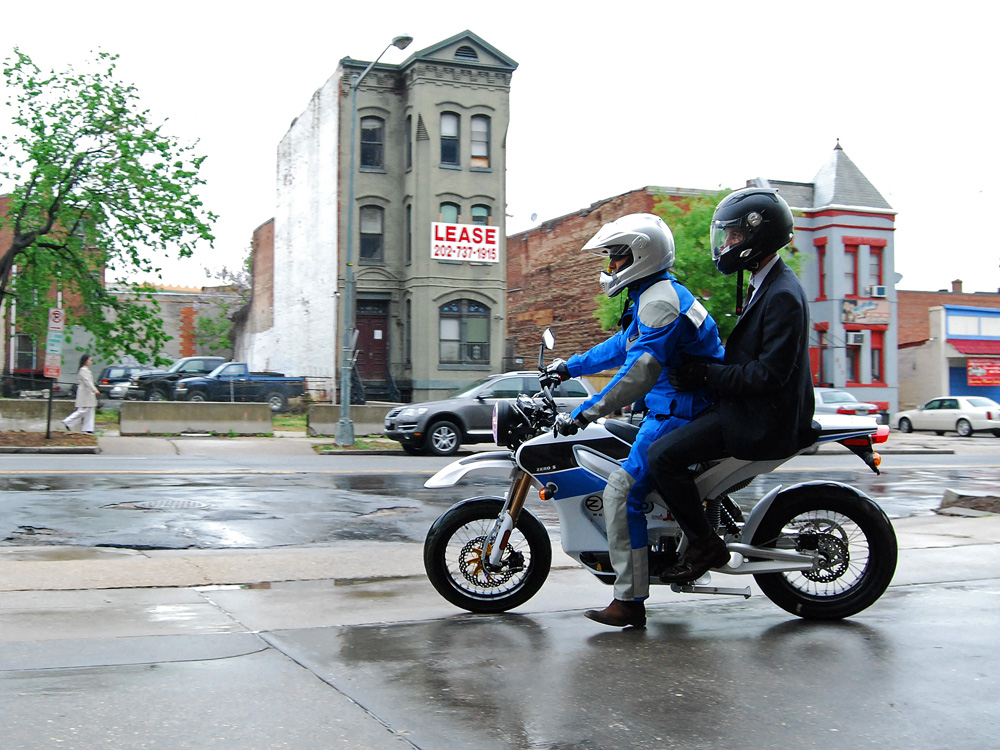 You probably recognize the sound of a Harley motorcycle. If you don't, try roaring "potato-potato-potato" into a microphone, and you'll be close. But today there's a much quieter motorcycle sneaking up behind the Harley, the 2010 Zero S street motorcycle. And if you don't love the sound, your neighbors sure will.

It's a completely silent, pollution-free motorcycle created by the California-based company Zero Motorcycles. The founder, Neal Saiki, designed world-class mountain bikes for years before moving on to electric motorcycles. He tells NPR's Guy Raz that electric motorcycles have been in the works for decades but only recently became technically possible.

"I've seen examples of electric motorcycles from the '30s and '40s, but really the technology has held all this back," he says. "You've had very heavy batteries and heavy motors, and the performance was terrible."

There were two breakthroughs that made electric motorcycles possible, Saiki says. First, the small, high-powered motors the military has been using for torpedoes were finally made available to the public sector. Then came powerful lithium-ion batteries, "about eight times more powerful per weight than typical lead acid batteries."

Now that the electric motorcycle is here, Saiki says, there will be all kinds on the market in the next five to 10 years. And they'll be just as powerful as their gasoline-powered counterparts.

The 2010 Zero S goes 67 mph as it is. "They're pretty fast. They're full, freeway-legal motorcycles." Saiki says his team didn't want to mess around with the electric scooter market. "We wanted to stick to high-performance motorcycles."

Putting The Zero S To The Test

NPR's Paula Olson, a Harley rider, is skeptical that Saiki's bike will measure up to her hog.

I could get used to the lack of a real loud motor.

The Zero S weighs in at about two-thirds the heft of a gasoline motorcycle, however, and Saiki says the lighter weight makes the bike handle well. He spent a lot of time in the aerospace and bicycle industries, and says much of that experience went into his motorcycle's design. "It's very, very snappy, very quick performance, very easy to maneuver -- and really very safe," he says.

But will it deliver the same thrill as Olson's Harley? She's pretty clear about what she wants from a bike. "I like the feeling of the wind and the feeling of almost like sailing but on tires," she says. "I like the sound of it, I like the power that you feel when you accelerate, and I like the control of it."

Olson gets on the Zero S and takes off -- silently -- around the mean streets of Washington, D.C.

When she slides back into NPR's loading dock, she's clearly impressed. "That was awesome," she says. "It has great turning radius, great acceleration."

The absence of the throbbing roar, as it turns out, has a bright side. "I could get used to the lack of a real loud motor," she says. "You get to hear the streets, and you get to hear things around you."

Where The Rubber Hits The Road

It may weigh less than conventional bikes, but the price of the Zero S street bike is pretty hefty: $10,000.

Several states offer tax credits or rebates for zero-emission vehicles, Saiki points out. And then there's the fuel savings.

It's about a penny per mile, according to Saiki. "You can fill up your gas tank -- your electric fuel tank -- for about 40 cents."

And unlike electric cars, which generally require a high-voltage outlet, the Zero S plugs into a conventional outlet.

It adds up to a pretty sweet deal, apparently. "If I were going to add a second bike to my garage," Olson says, "I'd probably think about doing one of these -- because it really is kind of fun to ride."