Accessibility links
The New Republic: Arizona's Immigration Hysteria The number of undocumented residents in the U.S. has steadily dropped since 2008, but Arizona Republicans have run recent campaigns as if the boarder is beginning to overflow. While Arizona Republicans picked up a little support from voters wanting tougher immigration standards and regulation, John B. Judis says the kiss-off to the Hispanic vote will be a much bigger hit to Republicans nation-wide than losing Arizona would have been. 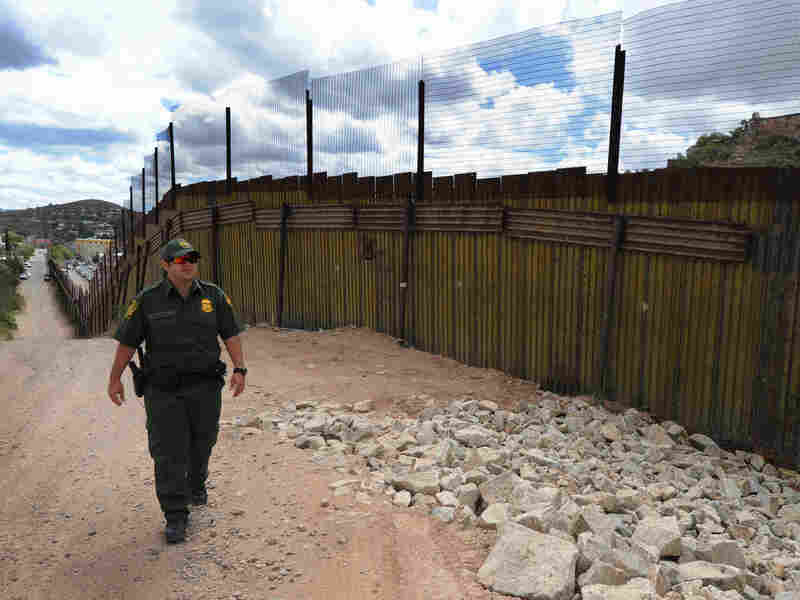 A U.S. Border Patrol officer keeps watch over the border fence that divides the US from Mexico. In a 10-point plan for beefing up security in the area, Senators John McCain and John Kyl called for permanently adding 3,000 US Custom and Border Protection Agents to the Arizona/Mexico and completing construction of 700 miles of fencing along the border and beefing up unmanned aerial vehicle patrols so that they could be run 24 hours a day. Mark Ralston/AFP/Getty Images hide caption 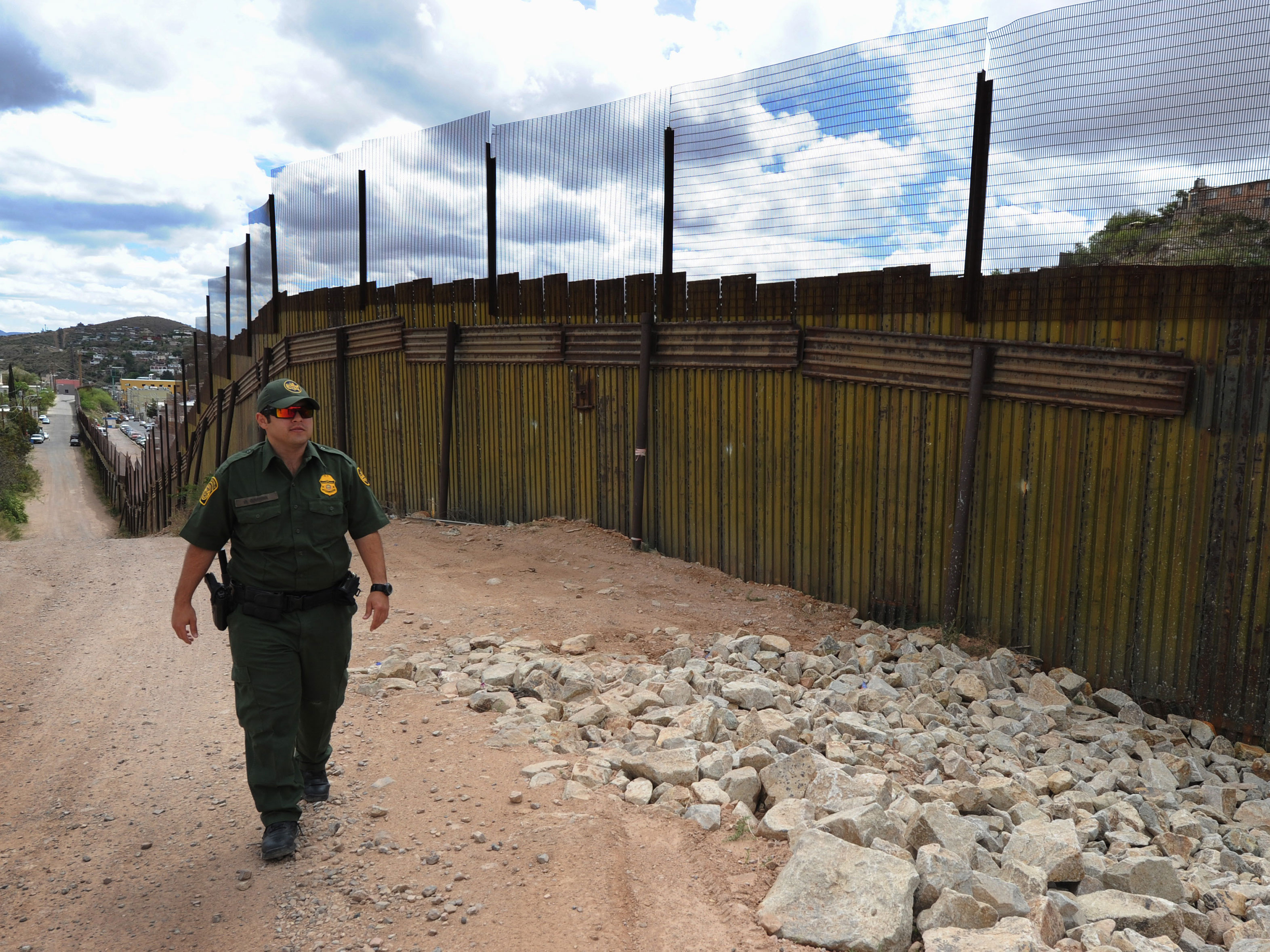 A U.S. Border Patrol officer keeps watch over the border fence that divides the US from Mexico. In a 10-point plan for beefing up security in the area, Senators John McCain and John Kyl called for permanently adding 3,000 US Custom and Border Protection Agents to the Arizona/Mexico and completing construction of 700 miles of fencing along the border and beefing up unmanned aerial vehicle patrols so that they could be run 24 hours a day.

Severe recessions can make people crazy and mean. During the Great Depression, immigration to the United States from Mexico virtually ceased, but states began arresting and deporting Mexicans, many of whom were in the country legally. The Mexican population of the United States fell by 41 percent during the 1930s. And the same kind of thing is happening again.

The recession has sharply curtailed illegal immigration to the United States. According to Princeton political scientist Douglas Massey, the number of undocumented residents in the United States peaked at 12.6 million in 2008 and fell to 10.8 million in 2009. Nowhere did it fall more sharply than in Arizona, where the number of illegal immigrants dropped by 100,000 over the last year. But Republicans in Arizona are acting as if illegal immigrants are pouring across the border and must be stopped by any means necessary. "The back door to the United States for all intents and purposes remains wide open," Republican Senate candidate J.D. Hayworth declared at a North Tucson town hall meeting last month.

Last week, the hysteria of the state’s conservatives took its most concrete form: The Arizona legislature passed a bill on a party line vote, and Republican Governor Janice Brewer signed it, making illegal immigration a state as well as federal crime and requiring Arizona police to require proof of citizenship if they have a "reasonable suspicion" that someone is in the country illegally.

The bill is ostensibly aimed at discouraging illegal immigrants from staying in Arizona, but it would also affect Arizona's Latino citizens and probably, too, its Native Americans, who would be subject to arrest if they fail to allay a policeman’s suspicion that they are in the country illegally. Los Angeles Archbishop Roger Mahony called the bill "the country's most retrogressive, mean-spirited and useless anti-immigrant law." Mahoney also questioned whether Arizonans are "now reverting to German Nazi and Russian Communist techniques." That is, perhaps, rhetorical overkill, but there is a disturbing echo here of the worst periods in American and European history.

The bill might not have become law if Democrat Janet Napolitano had still been governor. Napolitano vetoed similar measures. And Arizona's Latino community hoped that Brewer, who replaced Napolitano, would veto it. When she took office, Brewer was reputed to be a hard-line conservative, but faced with the reality of Arizona’s huge budget shortfall, she had begun moving to the center on a few issues. This year, she had the temerity to propose a temporary 1 percent sales-tax increase to prevent even greater cutbacks in state services.

Brewer's tax proposal enraged Arizona's conservative Republicans, as well as the state's Tea Party and Grover Norquist's Americans for Tax Reform, and challengers have already made it the focus of their campaign to defeat Brewer in this August’s Republican primary. Brewer evidently felt she couldn't afford to do something else that would alienate Republican conservatives -- and so she signed the immigration bill.

McCain might also have been expected to oppose the bill. After all, he had co-sponsored with the late Senator Edward Kennedy an immigration bill that would have eased the way for illegal immigrants to stay in the United States and eventually become citizens. But faced with a primary challenge from Hayworth, and a primary electorate that will be dominated by conservatives, McCain has been steadily disavowing prior stands on taxes, the bank bailout, gays in the military, campaign finance reform, and climate change. On the eve of the vote in the legislature, McCain came out in favor of the immigration bill. "I think the people of Arizona understandably are frustrated and angry," he declared.

Of course, there will be legal challenges, and there will likely be boycotts of Arizona's hotels and conventions. That happened after the state refused to celebrate Martin Luther King's birthday, and led eventually to Arizona giving in. There will also be political repercussions. While Republicans may pick up a few more percent of the angry white vote in November 2010, they can kiss the Hispanic vote goodbye -- and not just in Arizona. That may not have meant much in 1935, but in the years to come, it could seal the Republicans' fate as a minority party. That’s at least one price they'll pay for being mean and crazy.