Accessibility links
Movie Review - 'Furry Vengeance' - Skunks Aren't All That Stink Dan Sanders (Brendan Fraser) moves his family to the Oregon wilderness to oversee the construction of a housing development, only to learn that he's messing with the wrong woodland creatures. Raccoons, bear and squirrels alike fight the destruction of their home by terrorizing Sanders with animal poop — and the audience with jokes about it. 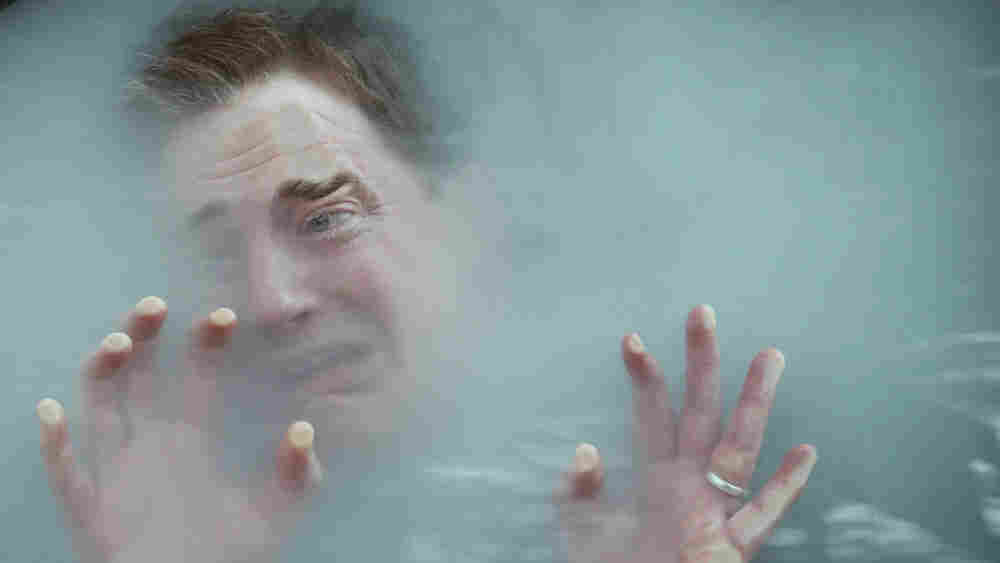 The All-Natural Hotbox: Dan Sanders (Brendan Fraser) endures the wrath of woodland creatures — including a pack of angry skunks in his car — when he agrees to oversee the construction of a housing development on their woodland home. Summit Entertainment hide caption

'Are You Taking Crazy Pills?'

Animal lovers may briefly thrill to Furry Vengeance, a comedy in which woodland creatures rise up against a plan to raze their forest home. But the joy of turning the tables on rapacious developers quickly drains from this witless movie, if only because because the odds are so lopsided: One team fields a wily raccoon and his pals, while the best the other can muster is Brendan Fraser.

Aside from his occasional turn as a mummy battler, Fraser has built a career on playing clueless characters. But never before has a movie's direction and script lagged so far behind the actor's hapless persona. If Fraser's character is a human Wile E. Coyote, director Roger Kumble is barely Elmer Fudd.

Furry Vengeance is poorly written, clumsily directed and sluggishly paced, but its essential problem is that it budgets 90 minutes on a gag that works better in 30-second spots: animals wreaking havoc on humans. The movie expands on that car-insurance commercial that uses a mix of trained creatures and computer-manipulated imagery to depict an alternate universe in which mischievous squirrels can take out an SUV.

In the movie's opening sequence, just such a squirrel sounds the alarm on a boorish interloper who throws a lighted cigar from his careening sports car. The woodland's Sun Tzu, a raccoon, calls other animals into action, and the car zooms off a cliff.

Turns out, once this brief induction is over, that the dispatched lout was a development company executive, who's replaced post-titles by Dan Sanders (an alarmingly chunky Fraser). Dan relocates his wife (Brooke Shields) and teenage son (Matt Prokop) from Chicago to the bucolic Oregon wilds to supervise a the building of a housing subdivision. He promises that they'll only be there a year -- but that's before the local fauna stage a full-scale revolt.

Dan gets pecked, stung and bashed. He's splashed and splattered with -- and eventually marinated in -- various forms of excrement. Because this mayhem is the work of innocuous-looking mammals and birds, Dan initially can't believe he's been targeted. And because no one else sees the attacks, Dan's family and subordinates think he's cracking up. (Enter a clearly unmotivated Wallace Shawn as the local shrink.) 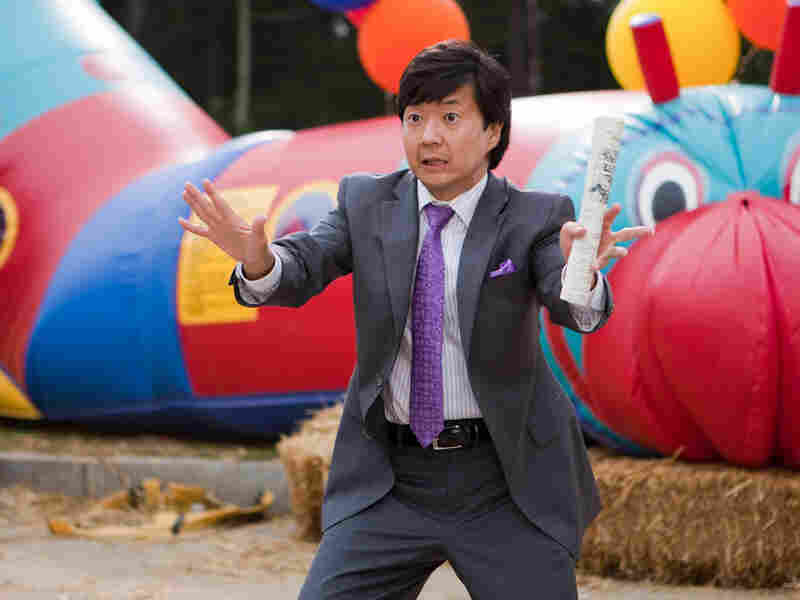 Going After The Man: Sanders' demanding boss, Neal Lyman (Ken Jeong), plans to replace a lush Oregon forest with a housing development and — in a nod to the great outdoors — a forest-themed shopping mall. Summit Entertainment hide caption 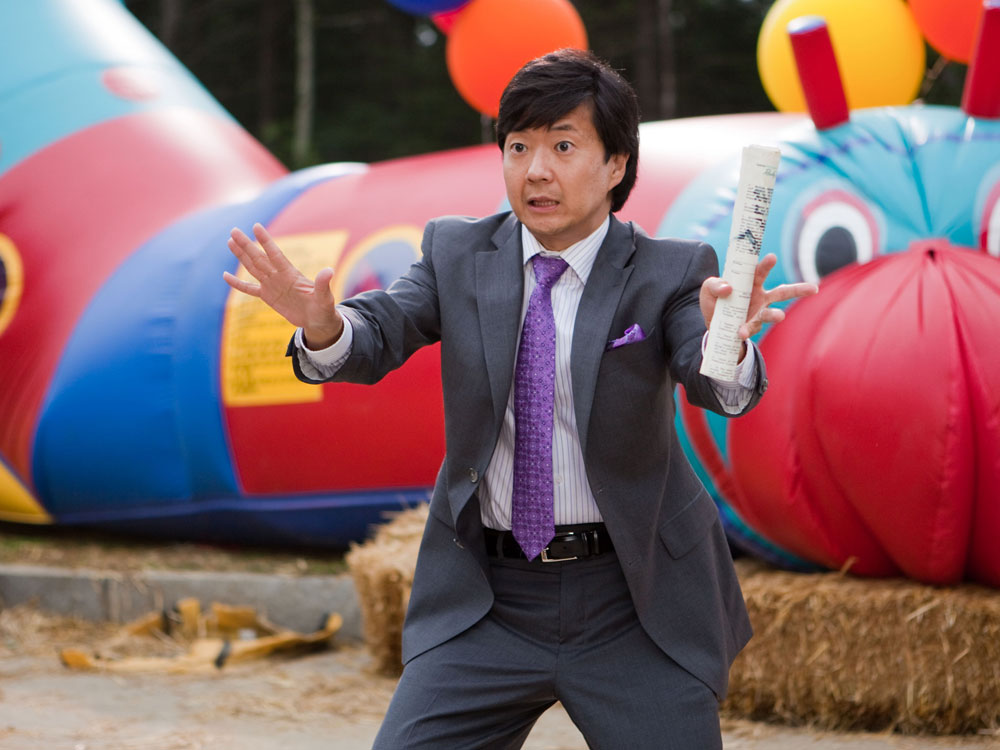 Going After The Man: Sanders' demanding boss, Neal Lyman (Ken Jeong), plans to replace a lush Oregon forest with a housing development and — in a nod to the great outdoors — a forest-themed shopping mall.

The war escalates with the arrival of Dan's Korean-American boss (another shrill ethnic burlesque from The Hangover's Ken Jeong). He explains that the project is much bigger than originally revealed.

In response to this news, the raccoon calls out the shock troops (a squadron of skunks) and the heavy artillery (an immense bear). But the most formidable weapon will be, of course, a change of heart.

For fans of anthropomorphized animals, the cartoonish combat has its moments. But the CGI technique wears thin, and doesn't always work. Some of the action is too contrived to be charming, and the critter crowd scenes look like the work of someone who's had about 30 minutes of Photoshop training.

Furry Vengeance gets increasingly panicky as it proceeds, culminating in a desperately unfunny credits sequence featuring parodies of songs, movies and music videos. And the influence of commercials never fades, even on the soundtrack. The film's hippest tune, Vampire Weekend's "A-Punk," is probably best known from a laser-printer TV spot.