Accessibility links
How Cap And Trade Was 'Trashed' Climate-change legislation has suffered a major setback in the Senate, with its key GOP supporter backing away. Even if it can be revived, it won't contain the centerpiece idea of the House-passed bill: a proposal to use free market techniques to reduce carbon emissions.

How Cap And Trade Was 'Trashed'

How Cap And Trade Was 'Trashed' 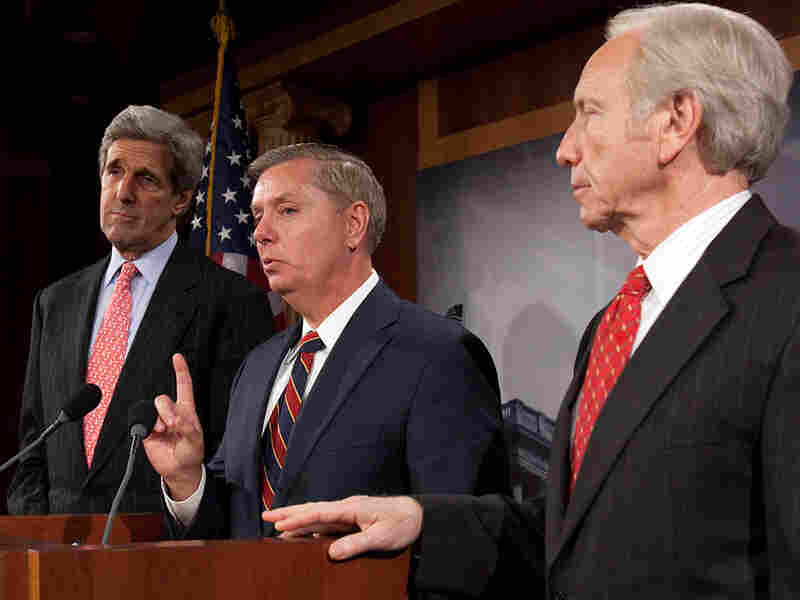 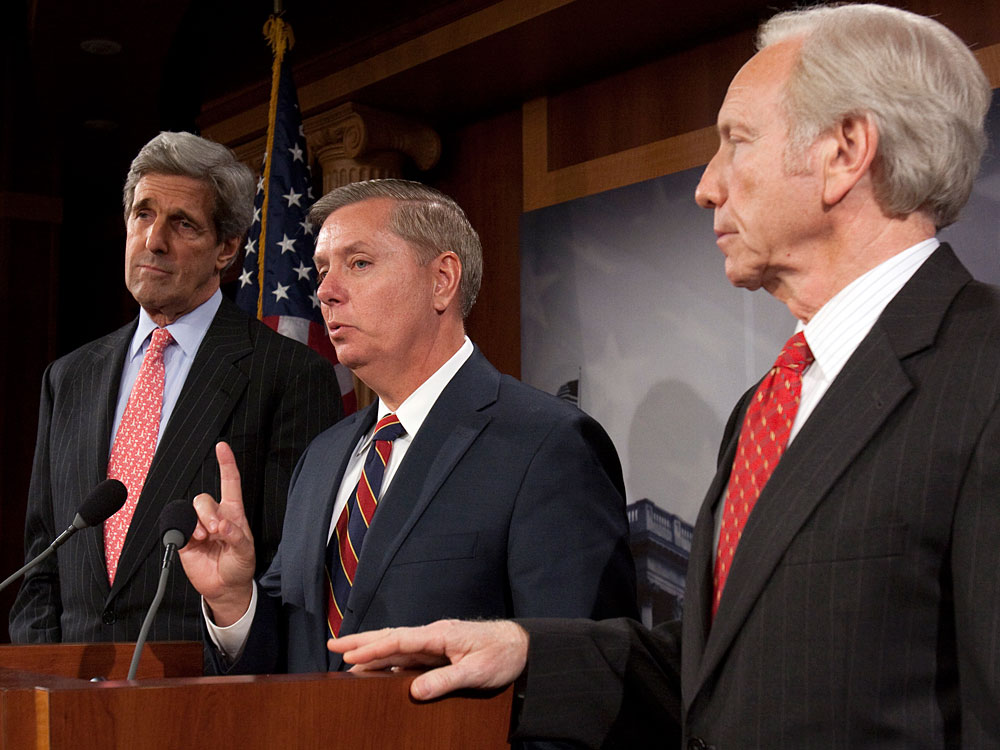 It's not clear whether climate-change legislation has any chance in the Senate this year. What is clear is that even if the chamber does manage to pass a bill, it will be much less ambitious than the version approved by the House last year.

Sen. Lindsey Graham (R-SC) spent months negotiating with Sens. John Kerry (D-MA) and Joseph Lieberman (I-CT) over what was expected to be the Senate's blueprint for action on the issue. Over the weekend, Graham pulled out of the effort, canceling the bill's introduction, which had been set for Monday.

Graham cited partisan politics, accusing Democrats of moving an immigration bill ahead of the climate-change effort in what he called a "cynical political ploy."

But it was clear Graham was under partisan pressure himself.

Graham has been castigated in his home state for working with Democrats on the issue and had not been able to win over any GOP co-sponsors. Climate change has become an increasingly partisan issue.

In large part, that's because of conservative opposition to cap and trade. Cap and trade, which refers to a system for limiting and gradually reducing pollutants, was the cornerstone of the House bill. But the idea has come under steady attack from conservative commentators and some interest groups that have successfully rebranded it as "cap and tax."

The term cap and trade didn't exist until the mid-1990s, but by that time the idea had already served as the centerpiece of a landmark environmental law. It had turned out to be the solution for acid rain. ... Yet despite the political and environmental success of sulfur dioxide trading, cap and trade for carbon has lost political viability.

How toxic is its brand? Interior Secretary Ken Salazar said last month that cap and trade was no longer part of the "lexicon," while the abortive Kerry-Graham-Lieberman bill sought out alternatives to using such a system.

All of this represents a big change since the last major congressional debate about cap and trade. Back then, it was embraced by Republicans as an idea that could break through gridlock that had stymied efforts at solving an environmental problem for years.

Remember When The GOP Embraced Cap And Trade?

Under cap and trade, polluters are issued or sold permits for each ton of carbon they emit. Companies that reduce the amount of pollution they spew are able to sell, or "trade," permits they don't need.

The term cap and trade didn't exist until the mid-1990s, but by that time the idea had already served as the centerpiece of a landmark environmental law. It had turned out to be the solution for acid rain.

No one talks about acid rain any more, but it was arguably the dominant environmental issue of the 1980s. The burning of coal, particularly by Midwestern power plants, led to the emission of sulfur dioxide, which fell back to earth in poisoned showers that killed rivers and streams, especially in the Northeast.

Congress spent years arguing about how to curb acid rain, but divided along regional and partisan lines. Ideas about burning cleaner coal from Western states or mandating "scrubbing" of industrial emissions went nowhere.

Then, during the 1988 campaign, George H.W. Bush said he wanted to be the "environmental president," promising action on issues such as acid rain. It turned out that he was able to deliver.

Members of his administration embraced the cap-and-trade idea -- then known as emission or allowance trading -- because they viewed it as a way to free the marketplace to come up with its own ways of meeting the government's goals.

The support of a Republican president brought along enough GOP votes to make cap and trade the key component of the 1990 Clean Air Act.

"Throughout the '80s, the debate about acid rain resembled the debate over global warming, in that there were Republicans who didn't believe acid rain was real -- that it wasn't happening or it didn't matter," says Daniel J. Weiss, who directs climate strategy at the Center for American Progress Action Fund, a Democratic group. "Bush, being a Republican, helped get a number of Republican votes."

Emissions trading worked better than even its strongest supporters had hoped. Cap and trade has since become the method of choice for Europeans and groups of states looking to reduce carbon emissions that contribute to global warming.

Yet despite the political and environmental success of sulfur dioxide trading, however, cap-and-trade for carbon has lost political viability. Conservative broadcasters and groups such as Americans for Prosperity and the Competitive Enterprise Institute have pummeled it as a new tax on much of the economy.

People who have worked on climate-change legislation say that there is nothing intrinsic to cap-and-trade that made it such a target. They say opponents would have castigated anything that had emerged as the legislation's top idea.

But even some of the supporters of the original cap-and-trade scheme say that auctioning off permits, rather than giving them away, betrays the idea's spirit.

"The proponents always say they're copying the highly successful cap-and-trade program of the Clean Air Act and they're most decidedly not, because they've thrown in this auction function," says C. Boyden Gray, an architect of that deal as White House counsel under the first President Bush. "That becomes a tax. You pull $2 trillion or $3 trillion out of the economy and that's what people are objecting to."

Environmentalists might argue about the use and purpose of charging for the right to pollute. But they agree that the notion of cap and trade, which made the 1990 act possible and looked certain to be central to action in this Congress, now cannot be sold.

Judy Greenwald, a vice president with the Pew Center on Global Climate Change, argues that cap and trade was too arcane a term for non-wonks to grasp and so was easily "trashed" in ways that she says are inaccurate.

"In our age, for better and for worse, a lot of people spend very little time on any particular issue, so how you name things can become very important," Greenwald says. "The term 'cap and trade' was not well chosen, and now it's gotten branded as a bad thing."