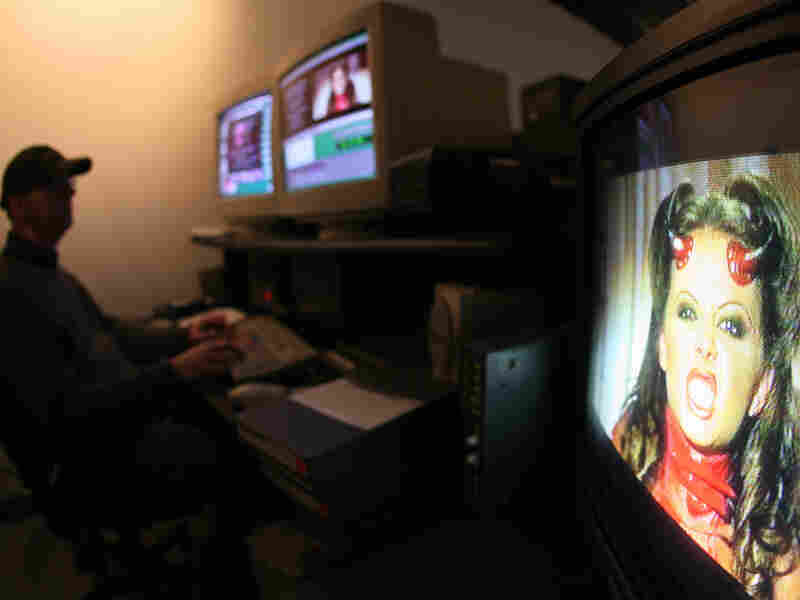 As this photo shows, costumes are often a part of pornographic films. But production studios like Vivid Video, where this movie was being edited, are resisting another piece of wardrobe: condoms. Gabriel Bouys/AFP/Getty Images hide caption 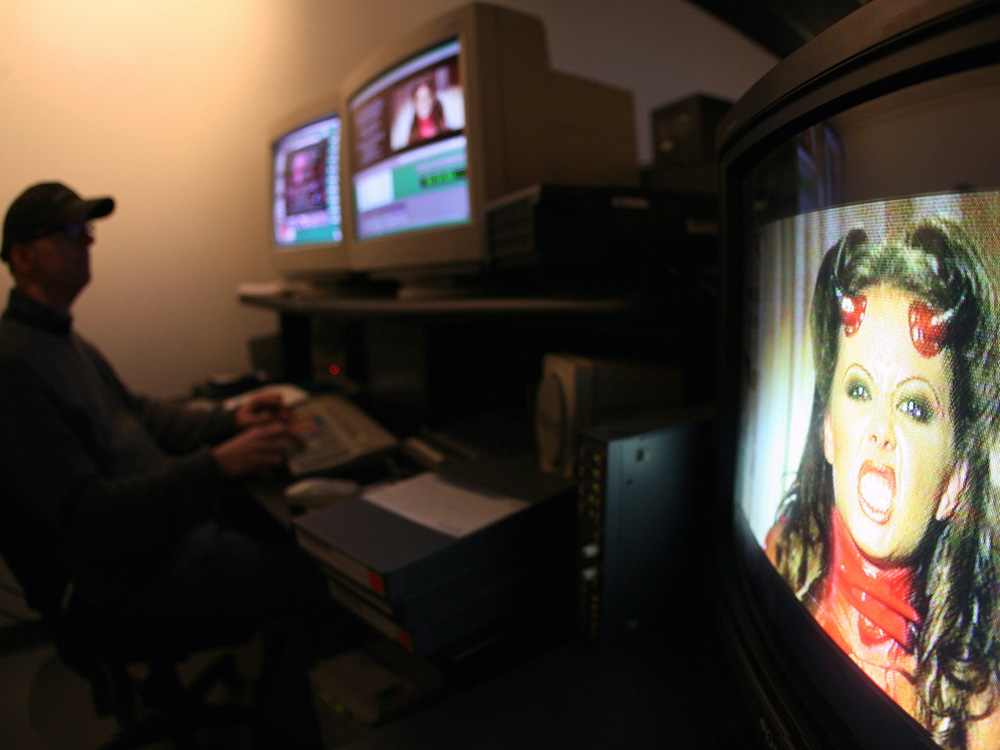 As this photo shows, costumes are often a part of pornographic films. But production studios like Vivid Video, where this movie was being edited, are resisting another piece of wardrobe: condoms.

But Vivid has also made a lesser-known video, in which a young woman, fully clothed, looks into the camera and says, "Workers in the adult film industry face particular hazards because actors perform sex acts" in their line of work.

No, it's not the sexiest video ever, but it is required viewing for all Vivid employees. The video goes on to explain the studio's rules: Performers must be tested for HIV and other diseases every 30 days; sex toys will be disposed of after one use; and condoms will be made available to all performers.

But many performers, both male and female, find it physically uncomfortable to do their jobs using condoms, says Vivid CEO Steve Hirsch. "If girls choose to have condoms used in their scenes, then obviously we accommodate them," he says. "Some girls choose to, and most girls don't."

Hirsch adds that most performers seem content with the current protocol for STD testing through a local clinic. "They put the results online; we can log in with a password; we can see whose tests are current, whose tests aren't current," Hirsch says.

But according to AIDS Healthcare Foundation President Michael Weinstein, that's not enough. "We know that testing, while important, is not a substitute for condom use," he says.

Weinstein points out that performers can have sex in between the time they get tested and when they make a film. That can raise the risk for spread of disease. Since 2004, Weinstein says, nearly two dozen adult film performers in Southern California have tested positive for HIV.

"HIV isn't the only lifelong infection," he says. "You have herpes among many of the performers; women who are getting chlamydia, which is making them infertile. Or other diseases which may make them susceptible to cervical cancer."

So far, the foundation has been unable to find a lawmaker willing to support legislation requiring condoms. It sued the L.A. County Health Department -- but a judge dismissed the suit.

But last winter, the foundation filed a petition with the California Division of Occupational Safety and Health, or Cal/OSHA. The organization's board recently took the first step in requiring condom use: It voted in favor of setting up an advisory committee to study the issue.

Deborah Gold, a senior safety engineer with Cal/OSHA, says that it's her group's job to ensure that when people go to work, "their health and their safety has not been jeopardized. And that applies to lead poisoning every bit as much as it does HIV transmission."

Those challenges are sure to come up in June, when Cal/OSHA's new advisory committee meets for the first time.