Accessibility links
Supreme Court Tests Anonymity Of Petition-Signers Should the names of people who sign a petition to put an initiative on a state ballot be kept anonymous? That's the question the Supreme Court will consider this summer. The court hears arguments Wednesday in a campaign disclosure case sparked by gay-rights legislation in Washington state.

The U.S. Supreme Court hears arguments Wednesday in a major campaign disclosure case that tests whether the Constitution protects the anonymity of people who sign petitions to get an initiative on the ballot.

Earlier this year, a narrow court majority reversed a century of campaign finance law, ruling that corporations can spend unlimited cash in candidate elections. The outcome of today's case could undermine the other pillar of campaign regulation: widespread disclosure provisions in federal and state campaign laws.

At issue in Wednesday's case is whether a state's open records law violates individual rights by requiring the names of petition signers to be available to the public.

Not surprisingly, the flint that started this constitutional conflagration is gay rights. The Washington state Legislature passed a law giving gay partners "everything but marriage" rights. Opponents of the measure sought to reverse that legislation by putting the law on the ballot. To qualify their initiative, they had to collect 120,577 signatures.

Gay-rights activists then asked to see the signatures to check for fraud, they said. State Attorney General Rob McKenna says that indeed is one of the reasons the open records law was enacted in Washington and elsewhere.

"As we've shown," he says, there are "dozens of examples of where public review of petitions has uncovered mistakes, has uncovered outright fraud -- and, in a number of cases, has resulted in petitions being rejected and measures not even qualifying for the ballot."

The effort by gay-rights groups to monitor the petition drive faltered, however, when their opponents went to court to block it.

The petition's sponsors contended that petition signers were entitled to anonymity under the Constitution. A federal judge issued a broad ruling that barred the state from releasing not just the names of signers in this petition drive, but those in any petition drive.

A federal appeals court subsequently reversed that decision, but the Supreme Court stepped in and temporarily blocked release of the names.

The end result was that the anti-gay initiative went on the ballot, without the identities of petition signers being made public. The voters soundly rejected the initiative anyway, and the "everything but marriage" law went into effect.

But the court case remained, and now the Supreme Court has before it the case testing whether petition signers are constitutionally guaranteed anonymity. 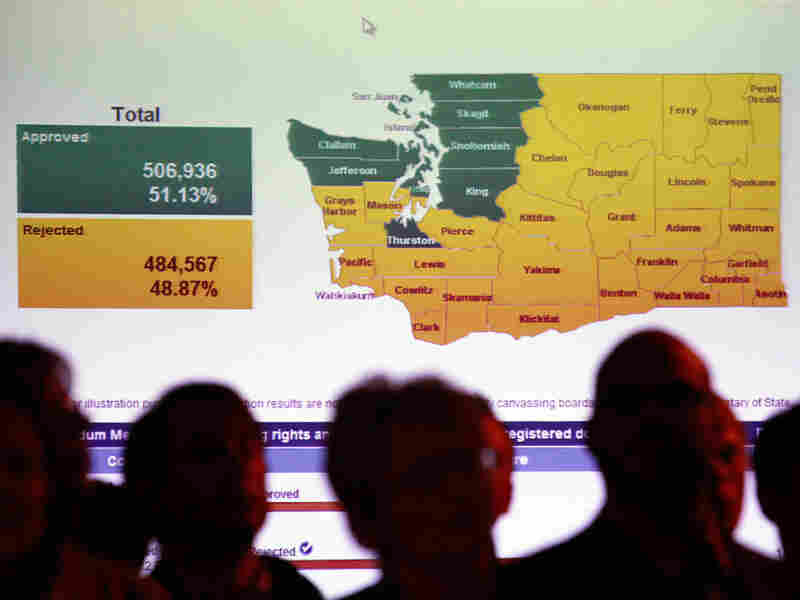 Voters in Washington state approved legislation providing "everything but marriage" rights to gay couples last November — but the fight over the referendum sparked a case that is now before the Supreme Court. Elaine Thompson/AP hide caption 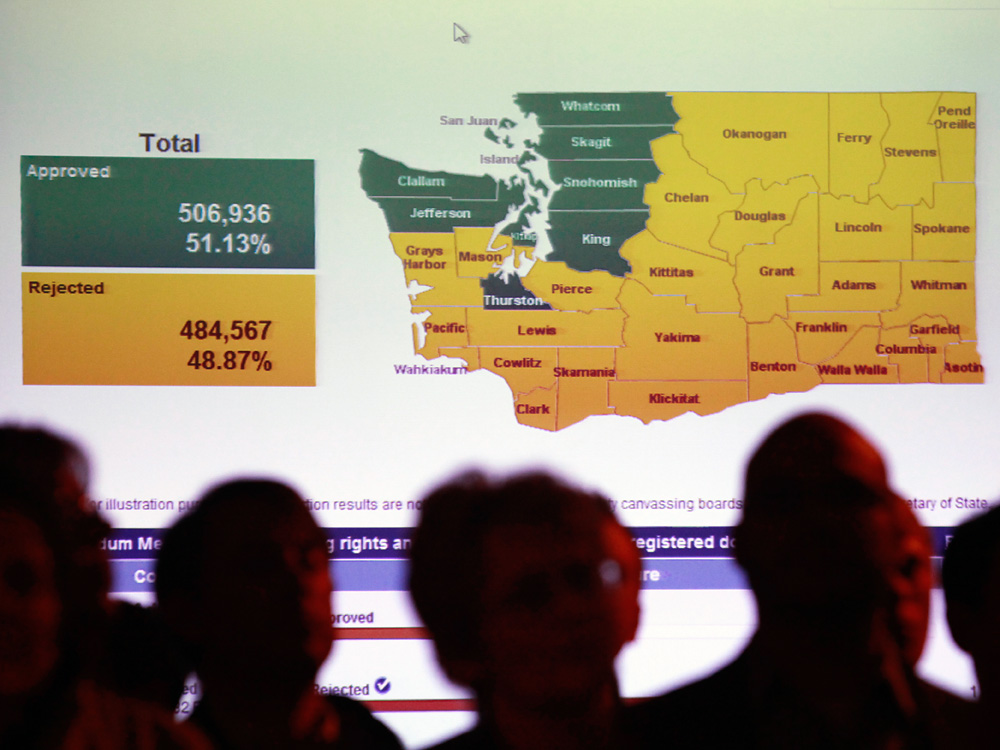 Voters in Washington state approved legislation providing "everything but marriage" rights to gay couples last November — but the fight over the referendum sparked a case that is now before the Supreme Court.

Attorney General McKenna, a Republican, defends Washington's open records law, contending that it is more than a check on fraud -- that it also ensures that a legislative action to undo a law is accomplished in public.

"You don't legislate in secret, and other voters, other citizens, have a right to know who among them is demanding an election on a legislatively approved law," McKenna says.

But James Bopp, who represents groups opposed to the gay-rights law, vehemently disagrees.

"If we accept that argument now, we're all going to have to stand in public and announce who we're voting for and whether or not we're voting yes or no on this initiative," he says. "That's the way tyrannical governments control and do phony elections."

Disclosure advocates reply that signing an initiative is not core political speech, that it is nothing like casting a vote. It is done in public places, with many signatures on each page and viewable by other signers.

And, says McKenna, signing a petition does not say much of anything about the signers' views. They could be saying they endorse the measure, or just that it should at least be on the ballot, he says, "or they could be saying, 'I really want to get away from this petition-gatherer, and get into the Walmart that I'm visiting.' "

Lawyer Bopp counters by pointing to cases of harassment that he says occurred in California over the gay-marriage initiative on the ballot in that state. And he contends that gay-rights activists intended the same kind of harassment of petition-signers in Washington.

"They said they wanted to post them on the Internet in order to encourage people to have 'uncomfortable' -- and that's a quote -- 'uncomfortable conversations' with them," Bopp says. "So the whole purpose had nothing to do with the validity of the signature, and it had everything to do with harassing and intimidating these people."

"In fact, in a democracy, there are supposed to be conversations which are occurring about difficult or contentious political issues," McKenna says -- even if those conversations are uncomfortable.

But Larry Stickney, who served as campaign manager for Protect Marriage Washington, says he was the butt of more than uncomfortable conversations.

"It seemed like a blood sport for the other side. Any form of communication that could reach our home was, including e-mail, telephone, letters -- we were the recipients of obscenities and threats and Internet harassment," he says. "I'm talking about an attitude of total war here."

Stickney says he was so worried about his family's safety that he had them sleep in the interior rooms of the house.

Attorney General McKenna replies that if someone were really making threats, that's a crime -- and he says that a sheriff's investigation in Stickney's case, while producing no evidence that a crime took place, did seem to calm things down a bit.

Gay-rights activist Anne Levinson, a former judge, says that to her, efforts by Stickney and other leaders to keep their names secret seem beside the point.

"Some of the names that they were trying to keep from being disclosed," she observes, "were the very people who proposed these measures and who were debating me across the state on televised debates. So they were public figures already, by their own choosing."

McKenna does concede that in some narrow circumstances, the names of petition-signers should be kept secret. But, he says, the standard should be high, requiring proof of numerous actual threats, intimidation and harassment. And in this case, the plaintiffs "have presented really no evidence of that," he says.

Attorney Bopp concedes the point but contends things would have been much worse if the courts had not stepped in to bar disclosing the list of petition-signers.

Bopp is a leading figure in opposing many existing campaign regulations. He was the lawyer who first went to court to challenge the ban on corporate spending. And he is fighting campaign finance disclosure provisions across the country. As a result, many of his opponents see this case as a kind of stalking horse for a broader attack on disclosure requirements.

"The sponsors and their attorney seem intent on unwinding a fair amount of campaign finance disclosure law," McKenna says.

Levinson agrees. "They have embarked upon a systemic effort to shroud their involvement in campaigns and in lobbying by trying to challenge not only public records acts," she says, but also the "names of contributors or any information that might allow the public to see the sources and the magnitude of the money they're spending."

Bopp does not dispute that he favors anonymous speech, contending that it encourages more speech.

"Of course you are entitled to anonymity," he says. "In fact, the most important document ever prepared in the history of our country, the Federalist Papers -- which were used ... to explain and justify the adoption of the Constitution of the United States -- was all done anonymously."

In Washington state, though, the argument is far less cerebral. Each side sees itself as the victim of the other.

Gay-rights activist Levinson points to Justice Department statistics showing a consistent rise in hate crimes against homosexuals, including five murders in 1968. "Given our small numbers and the disadvantages we have faced over the years, and the decades and decades of harassment, and even death, it is more than ironic that petitioners would take the position that somehow it is they who are the victims and they who need protection," she says.

Her adversary Stickney, however, sees himself as the victim of a double standard.

"If the harassment had come to homosexual groups or perhaps certain minority groups, perhaps a local mosque or something, you'd have seen the Army, Navy, Air Force and Marines out there surrounding houses and arresting people," Stickney says.

The Supreme Court's opinion is expected by summer in the case of John Doe No. 1, John Doe No. 2 and Protect Marriage Washington v. Sam Reed.