Accessibility links
National Review: An Uncensored Look At 'South Park' Comedy Central's South Park has offended just about everyone under the sun, but their 200th episode poking at Islam by featuring a portrayal of Mohammad more notably garnered threats instead of laughs. Commentator Nina Shea says, however, that South Park creators Trey Parker and Matt Stone have one thing right that the publishers and networks that censor them don't: resistance to intimidation. 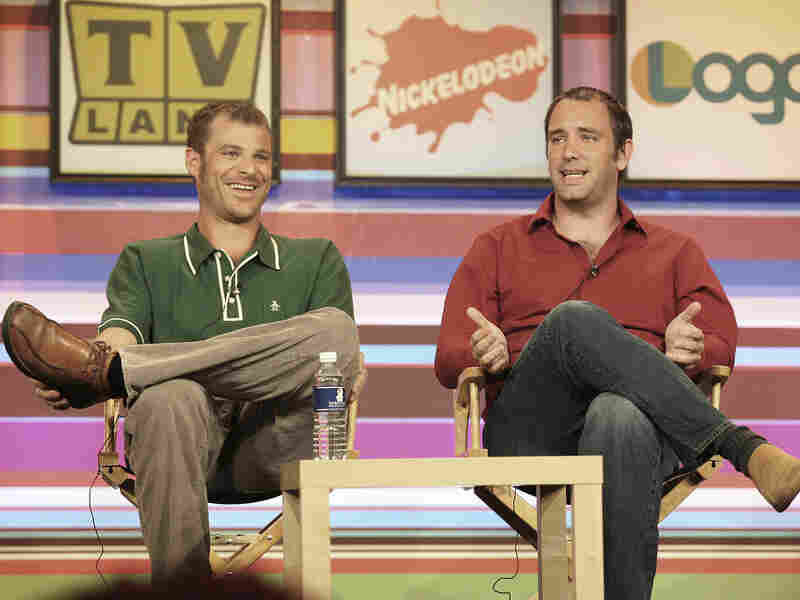 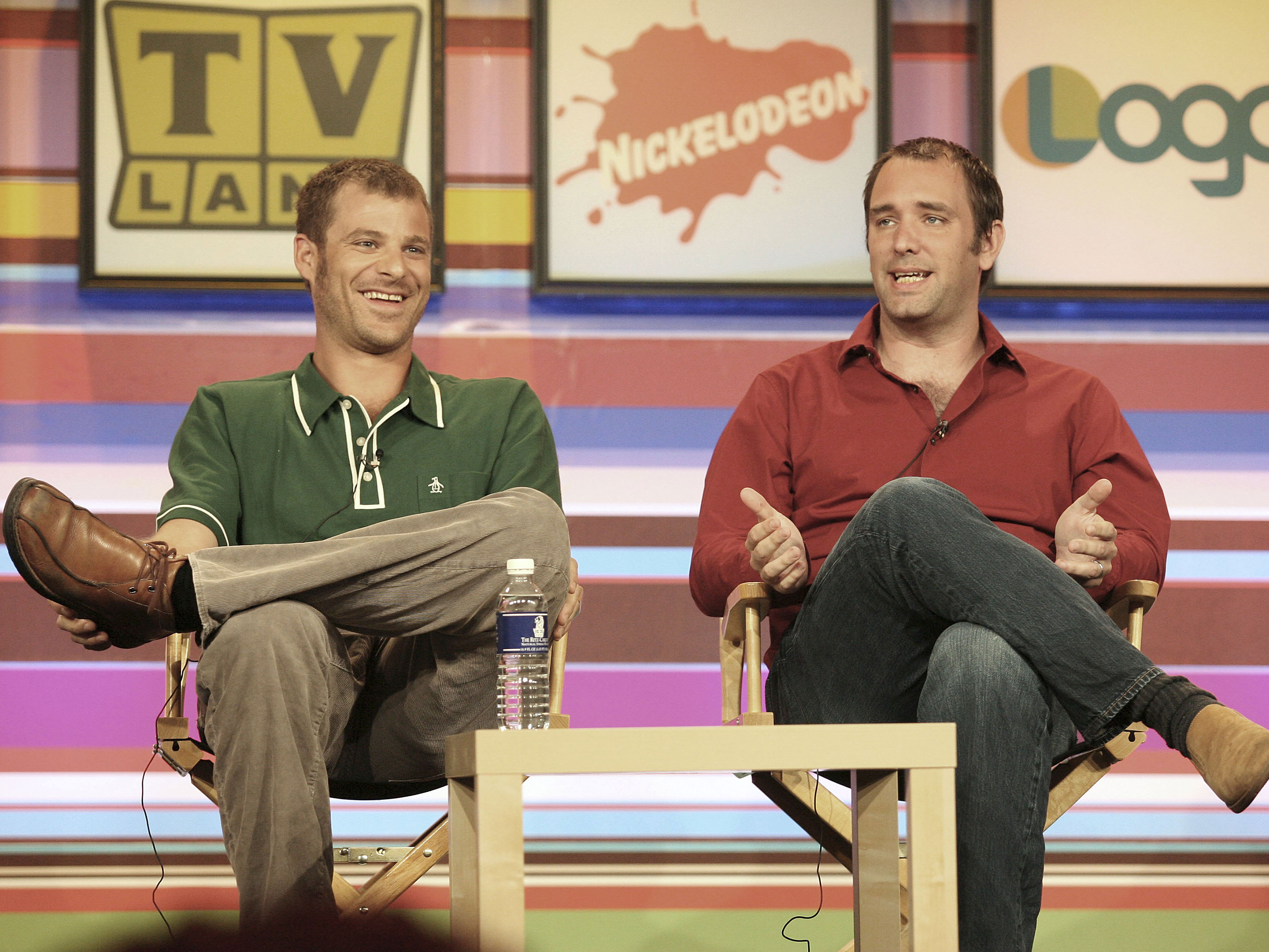 Comedy Central's censorship of a recent South Park episode after threats over a caricature of Mohammed is the latest evidence that the West is slowly surrendering, institution by institution, to diffuse but determined demands to suppress anything possibly deemed as blasphemy against Islam.

These demands are new -- beginning only with the Ayatollah Khomeini's 1989 fatwa against Salman Rushdie -- and are little understood by the West. Far more is at stake than a profane and intentionally crude cartoon show.

The controversy began on April 14, when, for the show's 200th episode, creators Matt Stone and Trey Parker decided to bring back controversial characters, mostly celebrities, from its past -- "everyone who's [ticked off] at us," as Parker explained to the press. In the episode, these characters threaten to file a class-action lawsuit against the fictitious South Park unless the town can bring Mohammed to them -- in a previous South Park episode, an image of Mohammed was censored, and the celebrities believe they can steal the prophet's mysterious power to be free from ridicule.

At various points in the episode, Mohammed's figure is blacked out, hidden in a U-Haul trailer as the townsfolk debate how to bring him into the open, and eventually disguised in a goofy mascot-style bear costume. The audience hears him, but never sees his face. Meanwhile, Jesus is shown watching pornography, Buddha snorting cocaine.

A group in New York called Revolution Muslim promptly posted a message on its website that appears to incite violence against Stone and Parker. It "warns" that they "will probably wind up like Theo van Gogh for airing this show," driving home the point with a graphic photo of the Dutch filmmaker after he was slain by Islamists in 2004. It also includes Stone and Parker's photos and their production company's addresses, as well as pictures of Ayaan Hirsi Ali, Salman Rushdie, Kurt Westergaard, and others who have been targeted by fatwas for purported blasphemy. There is an audio overlay of American terrorist Anwar al-Awlaki reading a fatwa against blasphemy: "Harming Allah and his messenger is a reason to encourage Muslims to kill whoever does that."

For the follow-up 201st episode, Comedy Central ramped up the self-censorship, replacing with audio bleeps not only every mention of the word "Mohammed," but also the entire speeches with which Parker and Stone had intended to conclude the story -- speeches that, ironically, were about standing up to intimidation. In the words of the Hollywood Reporter, this rendered the entire episode "practically incomprehensible."

While South Park insults Muslims along with nearly everyone else, its creators received a death threat not simply for insult but because they had allegedly committed blasphemy against Islam, for which death has been the traditional punishment. Revolution Muslim specifically denounces the "sacrilegious" treatment of the prophet and its "mocking" of the Islamic prohibition against showing his face by using the bear-suit "loophole."

Abiding by Islamic blasphemy rules is no small matter. Since Islam is a complex belief system that relates to all areas of life, under Islamic blasphemy regimes, large bodies of ideas that are commonly debated in the West cannot be discussed. The late former Indonesian president and distinguished Islamic scholar Abdurrahman Wahid observed that coercively applied blasphemy laws "narrow the bounds of acceptable discourse in the Islamic world, and prevent most Muslims from thinking 'outside the box' not only about religion, but about vast spheres of life, literature, science and culture in general."

In the West, extremists have already reacted violently to statements questioning Islamic doctrine's link to violence (Pope Benedict's speech at Regensburg), protesting the abuse of women by some Muslims (Van Gogh and Hirsi Ali's Submission), using the Koran in a work of fiction (Rushdie's Satanic Verses), sympathetically explaining Islam to Jews (Khalid Duran's Children of Abraham), criticizing Sudan's stoning law (a U.N. special rapporteur), and fictionalizing the prophet's marriage to a nine-year-old (Sherry Jones's Jewel of Medina). These are only a tiny sample.

The result is that now Revolution Muslim director Younis Abdullah Muhammad has effectively joined Parker and Stone on South Park's creative team. Comedy Central is added to Yale University Press, Random House, and the Metropolitan Museum of Art on the list of Western institutions that will now let Islamist extremists make decisions about what they can show and say. In a February interview that addressed censorship surrounding the Danish cartoons, including on South Park, Stone told the Huffington Post: "Cartoonists, people who do satire -- we're not in the Army, we're never going to be f***ing drafted, and this is our time to stand up and do the right thing. And to watch the New York Times, Comedy Central, everybody just go, 'No, we're not going to do it, because basically we're afraid of getting bombed' sucked. I was so disappointed." Unless we resist this intimidation, this will be only the beginning.