Accessibility links
In Defense Of Marmite Few foods inspire the kind of revulsion that Marmite does. Technically called "yeast extract," it's basically a spread made from waste from the beer-making process. But food writer Michele Kayal says it gets a bad rap — and that this earthy, salty British export will set your taste buds free. 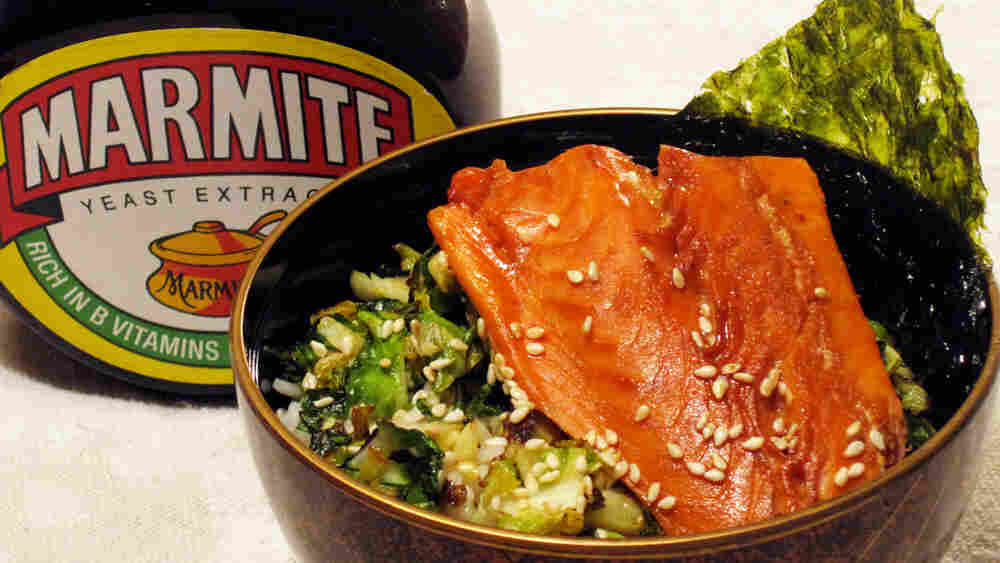 Few foods inspire the kind of revulsion that Marmite does. Just saying the word makes some people scrunch up their faces -- even if they've never tried it.

But me? I love the stuff. It started nearly 20 years ago on a cold, rainy day, when a British friend insisted that I shake the chill with a cup of Earl Grey and some Marmite on crackers. I sneered. I protested. I tasted. Revelation. Today, I love to smear its sticky gloss across a piece of hot toast. Love to twirl it around the end of a spoon, blacker and thicker than molasses, and suck it clean before the drippy tendrils catch my chin. Love to inhale its salty hoppiness, its sour-mash curdle. And when the last few drops cling to the sides of the brown-yellow jar, I love to swirl in a bit of hot water, so not a precious bit is wasted.

I can hear you all now -- eewwwwww! Believe me, I get that. What's not to hate? Its stench stings your nose. I call it glossy, but I'll give you slimy. To me, it's pure umami. To you, it's like sucking on a bouillon cube. Plus, it looks like sludge. In fact, it is a kind of sludge. 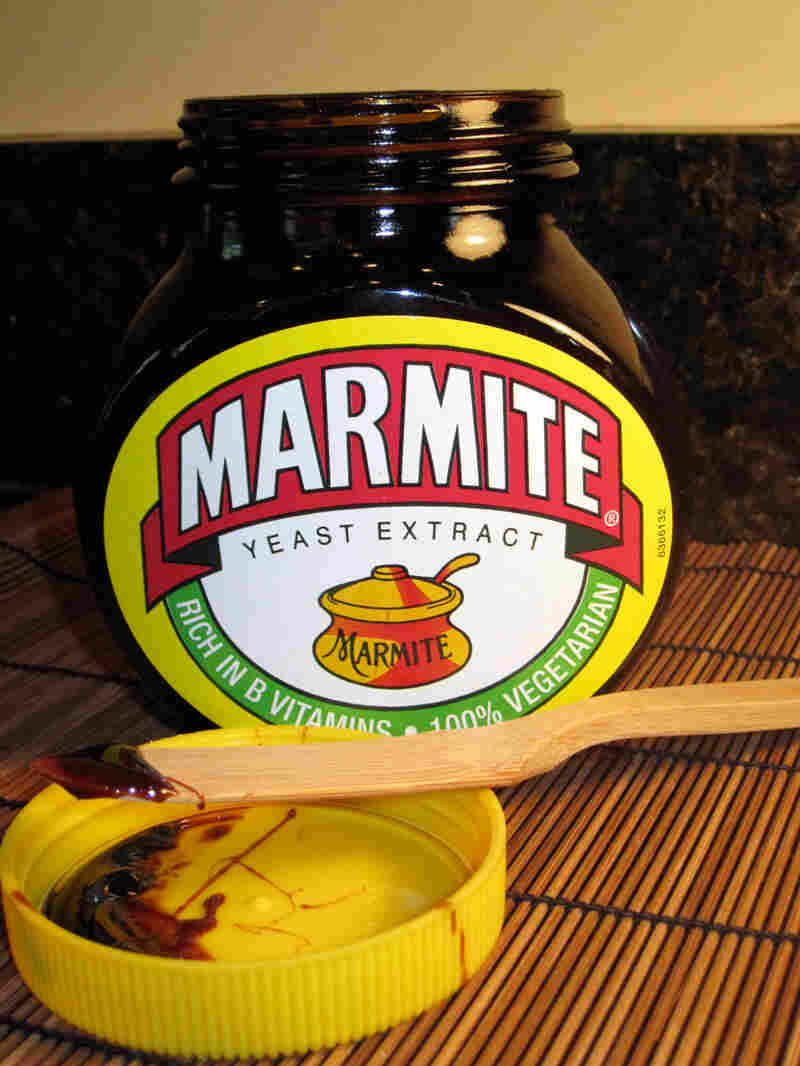 Marmite, technically called "yeast extract," is basically what gets scraped from the bottom of the beer barrel. The British breakfast staple, which was originally sold in earthenware jars that resembled the French stockpot called a marmite, was born more than 100 years ago in a small town called Burton-On-Trent. B-on-T is also the birthplace of Bass Ale. Bass was there because the water was considered so fine. Marmite was there as Bass' garbage man: It created a use for spent brewer's yeast.

I am not embarrassed to say that I visited Burton-On-Trent several years ago, and it wasn't for the beer. I made the 135-mile trip northwest of London specifically to tour the Marmite factory.

I pulled into town expecting to see banners that said "Burton-On-Trent: Home of Marmite!" Instead, the factory, which was not even mentioned on the tourist bureau's map, sat like an ugly cousin on the outskirts -- an ugly cousin who does not smell particularly nice.

A small, brick schoolhouse of a building with a red tower feebly broadcasting the Marmite logo, the factory was an homage to Oliver Twist. Inside, the hallways were worn and dim, and the production floor clanged like a steam engine. Stainless steel casks hissed and hummed under a highway of overhead pipes, and belching cauldrons spattered themselves with pre-Marmite. At the entrance to the floor sat a bin of what looked like rotting leaves: hops residue. Even my face crinkled. My nose twitched. I looked deep into the pot ... smells like ... oh. Oh, no. It smelled like manure.

I had been under the impression that Marmite spontaneously generated during the brewing process. In fact, turning that putrid slurry into my beloved spread is no small task. The exact process is a secret, but it involves breaking down the yeast, straining out the waste and concentrating the remainder. Yeast is naturally rich in B "vit-uh-mins," as the Brits would say, but more are added, as well as vegetable extracts, spices and salt. Yes, yes, I can just hear you now: "If you have to work that hard to make something edible, maybe it wasn't meant to be eaten." Possible. But the same goes for Twinkies. And as far as I know, they're not rich in folic acid.

My poor neglected breakfast buddy even fights for respect in its own town. As a souvenir, what could be better than a jar of Marmite from its birthplace? I checked a convenience store. Nothing. A couple of supermarkets. Nothing. I finally found a jar in a Sainsbury's supermarket, where it had been banished to the aisle with unappealing items like "potted beef" and something called "toast toppers," condensed breakfast goo in flavors like bacon-mushroom. I had also hoped for the Marmite-flavored potato chips I'd been told about. But all I found were rack upon rack of "Roast Beef and Yorkshire Pudding" chips and "Lamb and Mint Jelly" chips. Which just goes to prove that grossness is in the mouth of the muncher.

I believe there is something nutritional that brings me back over and over, something my body intuitively knows it needs. It settles a queasy tummy. It gives me a boost of energy. And there is nothing — nothing — that takes care of a hangover like a spoonful of Marmite.

I'd like to say that Marmite is an acquired taste. But it's just not. During my factory tour, the plant manager told me that unless they get their customer before age 3, they've missed their window. Brits like it more than anyone else, and even they don't like it that much. Only 25 percent of U.K. households actually have a jar on hand. So unlikely are the chances of conversion that Unilever, which makes Marmite, actually launched a "Love It/Hate It" ad campaign where devotees and detractors slug it out.

So who does like it? Anyone who craves a little adventure in the mouth. Anyone who believes that taste is multidimensional, that a tingle on your tongue is just as important as the flavor sliding down your gullet. Anyone who craves fullness, who lusts after round, rich, salty, earthy. I need Marmite the way deer need a salt lick. And though I can't prove it, I believe there is something nutritional that brings me back over and over, something my body intuitively knows it needs. It settles a queasy tummy. It gives me a boost of energy. And there is nothing -- nothing -- that takes care of a hangover like a spoonful of Marmite.

For people like me, the news just keeps getting better: Last month, Unilever released Marmite XO, for "Extra Old," the strongest, most pungent Marmite known to man. Made with yeast from four specially selected breweries and matured for at least 28 days -- four times longer than standard Marmite -- XO promises to curl your nose hairs and numb your tongue.

So if you've ever been Marmite-curious, now is the time to snag a jar from your nearest gourmet store, British specialty shop or online retailer (marmiteshop.co.uk is the mothership, but you can also find Marmite on Amazon.com). Open the jar and let your fantasies -- and fears -- run wild.

Forget the quintessential British breakfast of baked beans on toast. This superfancy egg preparation looks fantastic and tastes even better, offering the rich, earthy flavors of Marmite and mushrooms. The recipe is adapted from The Marmite Cookbook by Paul Hartley (Absolute Press 2003). 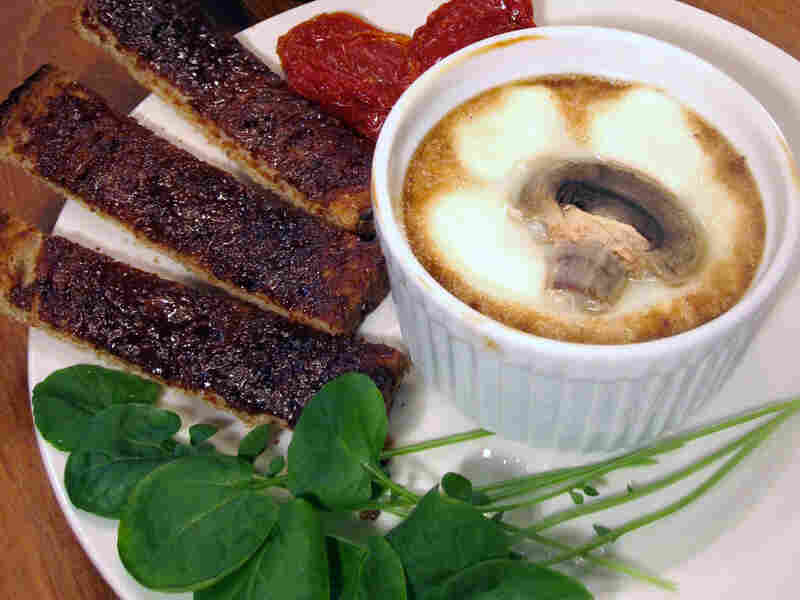 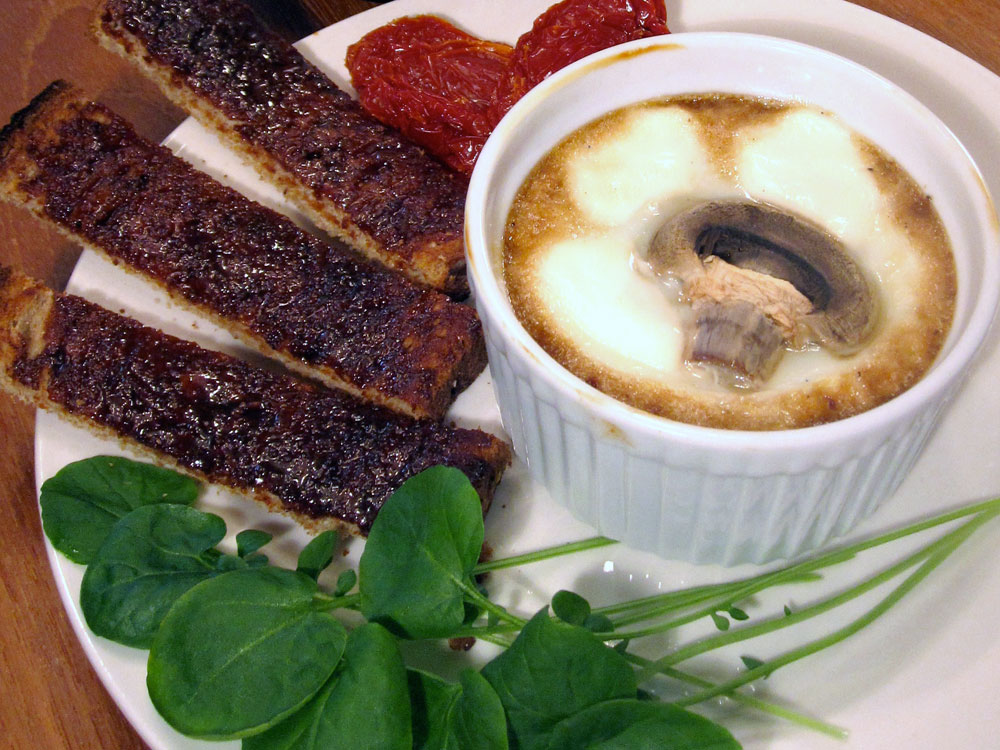 Butter and Marmite for spreading

Heat 1 tablespoon of butter in a saucepan until it begins to foam. Add the shallots and cook on medium heat for 5 minutes, stirring occasionally, until transparent. Add the mushrooms, nutmeg, the remaining butter and Marmite. Season with a few grinds of pepper. Turn the heat to low and cook gently 8 to 10 minutes, until the mixture is dark and thick.

Stir 1 tablespoon of the yogurt into the mushroom mixture. Divide among four 4-ounce ramekins. Make an indentation in the mushroom mixture and break an egg into each ramekin. Thin the remaining yogurt with the milk, adding more as needed, and divide among the ramekins, spreading gently over the eggs with the back of a spoon. Decorate each ramekin with a reserved slice of mushroom.

Stand the ramekins in a roasting pan filled 1/4-inch high with boiling water. Bake for 20 to 25 minutes, or until whites are completely cooked.

Serve with whole-wheat toast, spread with butter and Marmite, and sliced into strips, or "soldiers," as the Brits call them.

The vegetal flavors in the world’s favorite breakfast cocktail pair beautifully with Marmite. Try this drink with the baked eggs for a special brunch. The recipe is adapted from one by British chef Gary Rhodes. 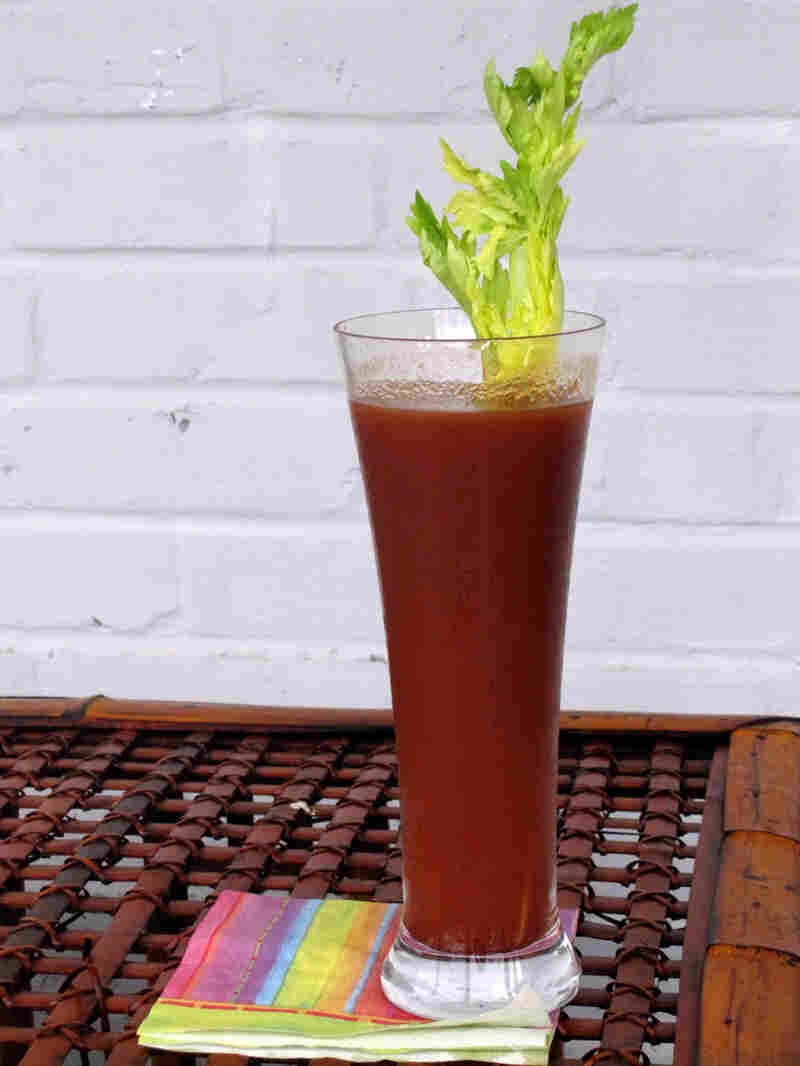 Fill a glass with ice. Add gin or vodka, lemon juice, pepper and celery seed. Mix the Worcestershire sauce and Marmite together in a small bowl until Marmite liquefies. Add to the glass. Add tomato juice. Stir well, then strain into a tall glass (no ice). Garnish with celery or asparagus stalk.

Ploughman's lunch -- pub fare consisting of hearty bread and strong cheddar -- gets a tang from a schmear of Marmite. These lovely cheddar crackers upscale the old standby. The recipe is adapted from Everyday Food: Fresh Flavor Fast. From the Kitchens of Martha Stewart Living (Clarkson Potter 2010). 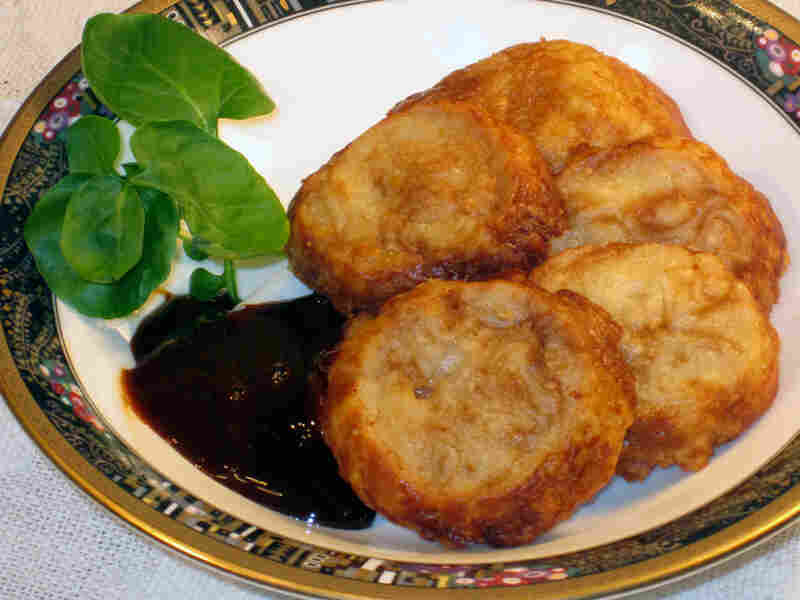 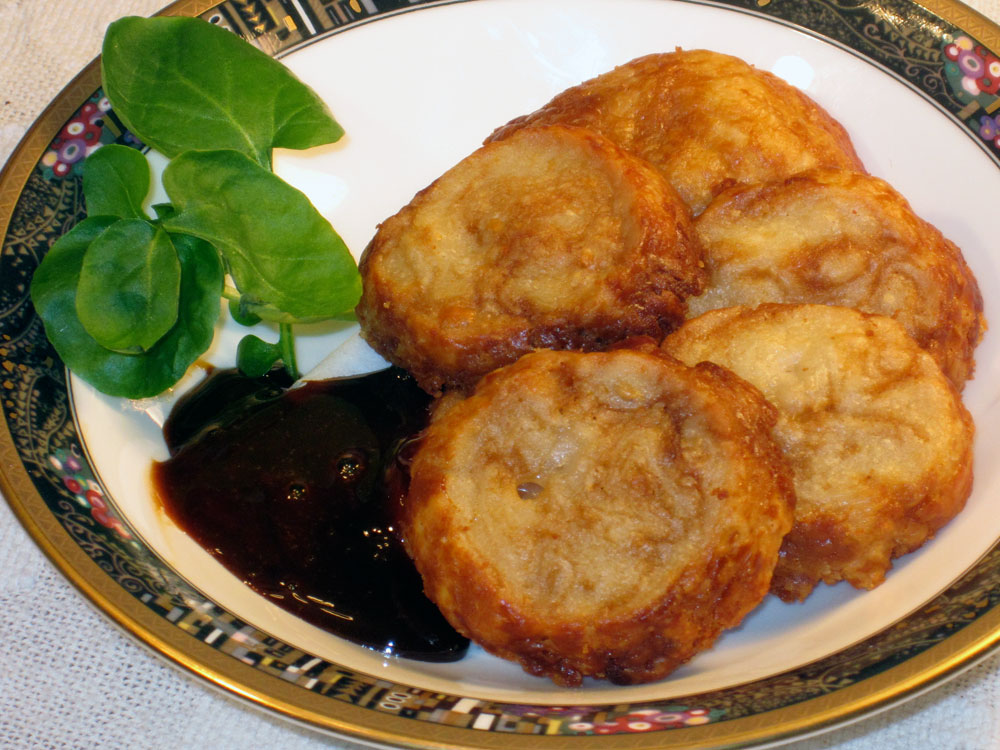 Whisk together flour, salt and cayenne pepper. Add the cheese, butter and Marmite, and work into a dough using your fingers.

Divide the dough in half and roll into logs about 1 1/2 inches in diameter. Wrap each log tightly in wax paper and refrigerate for 2 hours.

Bake, rotating sheets halfway through, until edges are golden, about 15 minutes. Transfer to a wire rack to cool. Crackers can be stored for up to 5 days at room temperature in an airtight container.

Marmite shares many qualities with soy sauce, and according to writer Maggie Hall, author of The Mish-Mash Dictionary of Marmite, it has been declared a source of instant umami by Tokyo’s Umami Information Center. So why not adapt Japanese ochazuke -- tea-soaked rice with toppings -- to the British ingredient? 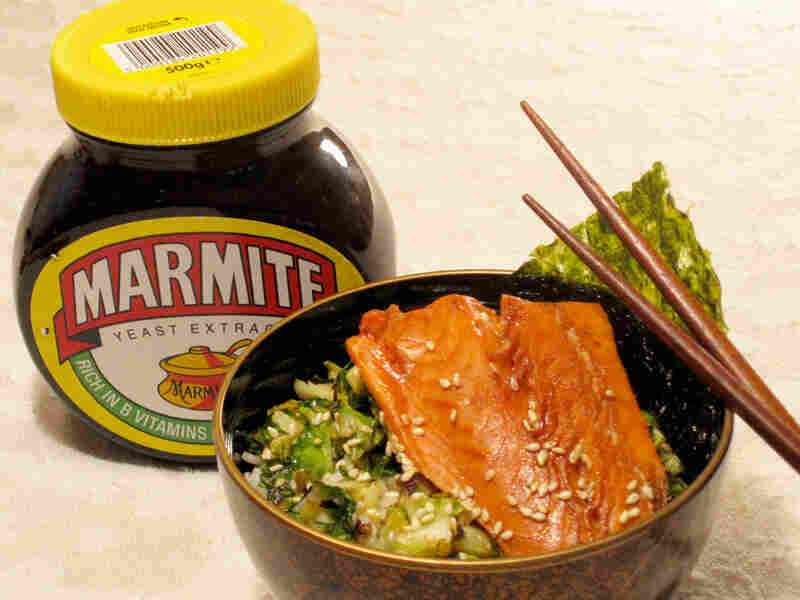 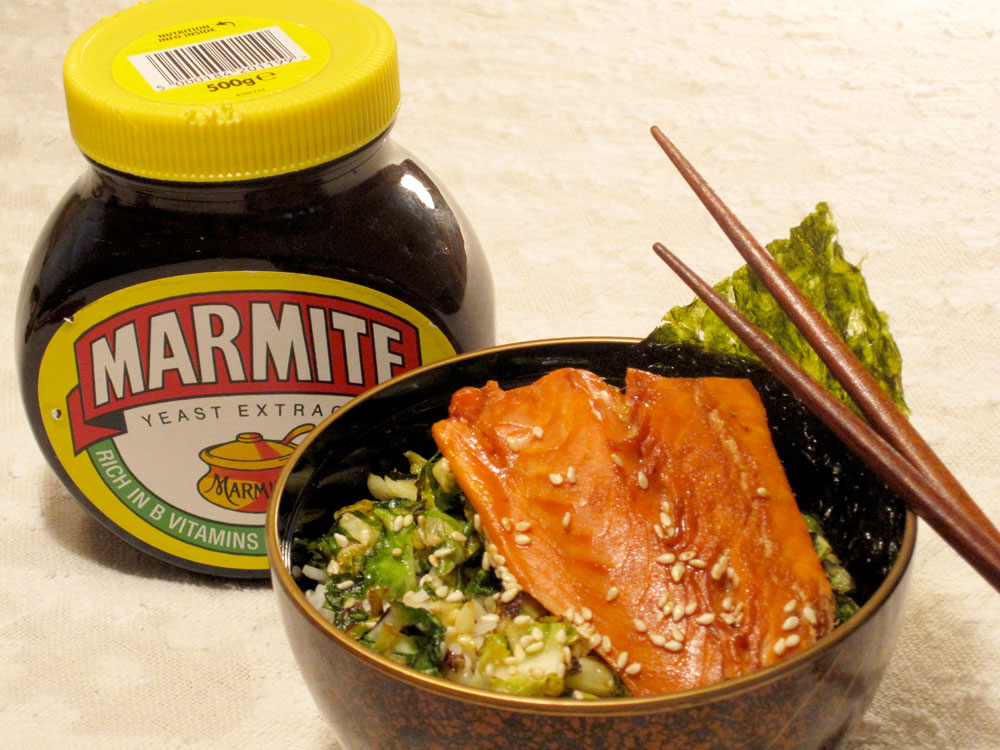 1/2-pound salmon filet, cut in half

1 1/2 cups cooked rice, preferably short grain, but any leftovers will do

Remove any pin bones from salmon. Rinse and pat dry.

Mix the Marmite and sherry together in a small bowl until well blended. Place salmon skin-side down on lightly oiled baking sheet and coat with the Marmite mixture.

Toss the Brussels sprouts and scallions with the sesame oil. Scatter around the salmon. Broil on high, 4 to 6 minutes.

Meanwhile, divide the rice between two bowls (if using leftover rice, warm first in the microwave). Pour 1/4 cup of the hot tea over each bowl of rice.

Place one piece of salmon on top of the rice in each bowl. Garnish with sesame seeds and seaweed.