Accessibility links
Frosty Asteroid May Give Clues About Earth's Oceans For the first time, scientists have found water ice on an asteroid. The giant space rock out between Mars and Jupiter appears to have a fine layer of frost on its surface. Scientists think that our own oceans may have come from water-bearing asteroids that smashed into our planet. 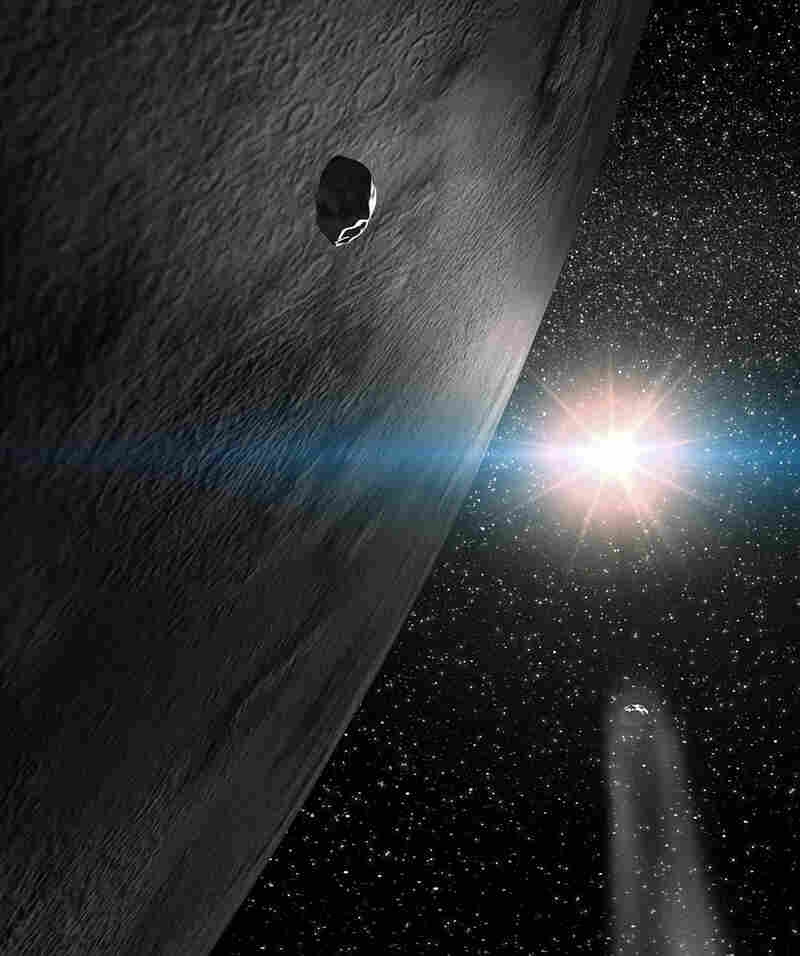 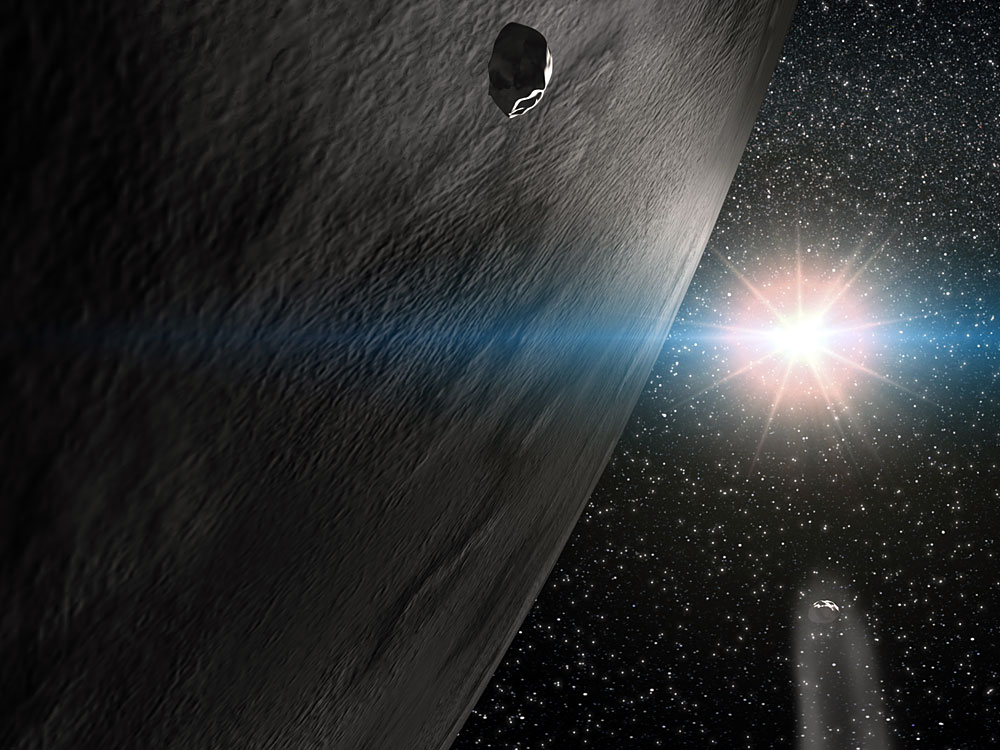 This illustration shows the asteroid 24 Themis flanked by two small fragments that broke off following a crash more than 1 billion years ago. The bottom fragment's cometlike tail comes from the sublimation of ice from its surface.

Out in the asteroid belt between Mars and Jupiter, at least one giant space rock seems to be covered in a fine layer of frost.

The finding, by two separate teams using an infrared telescope in Hawaii, marks the first time that frozen water has been found on an asteroid. Scientists believe that early in Earth's history, impacts from water-bearing asteroids and comets may have created our planet's oceans.

But until now, no one has actually detected water ice on an asteroid. "This is probably the most convincing case to date," says Henry Hsieh, an expert on comets and asteroids at Queen's University in Belfast, who wrote a commentary on two reports in the journal Nature that describe the new discovery.

The frosty find came as a surprise to Andrew Rivkin of Johns Hopkins University Applied Physics Laboratory in Laurel, Md., who was studying light reflected off a giant, 120-mile-wide asteroid named 24 Themis, to investigate its mineral composition.

When he and a colleague saw telltale signatures of water ice, Rivkin says, "I thought, 'That looks weird. I don't know if I believe that.' "

He and others assumed that water ice couldn't stick around on the surface of asteroids like this one, since it has no atmosphere. But additional observations kept showing the ice. What's more, it turns out that another group using the same telescope to study the same asteroid had come to an identical conclusion.

"I thought, 'Oh my God, this looks like ice!' " recalls Humberto Campins of the University of Central Florida in Orlando. "It does have a thin layer of water ice throughout most of its surface."

Campins says this surface ice must be constantly refreshed, but it's not clear where the new ice might come from. "You could have a subsurface layer, or a buried ice layer, in this asteroid that would have survived the age of the solar system," Campins says.

Unlike the planets, asteroids are thought to have existed mostly unchanged for billions of years. So scientists say the ice on this asteroid could show what kind of ice might have hit our own planet early in its history.

"The ice that we see there, right now, is sort of related to the ice that could have come from the main asteroid belt that hit us about 4 billion years ago," says Hsieh. "It gives us a way to kind of probe the cousins of the asteroids that hit us and probably gave us water in the early stages of the Earth's formation."

The two research teams also detected organic compounds along with the ice. So early asteroid impacts might have delivered more than one building block for life, says Campins.

Although asteroids are a staple of science fiction movies -- usually one is threatening the Earth or a spaceship has to make an escape by flying through a minefield of rocks -- scientists say that much remains unknown. "The questions we ask about the asteroids are very, very fundamental," says Rivkin.

One robotic science mission, called Dawn, is currently on its way to orbit two large asteroids, Vesta and Ceres, and is expected to arrive at Vesta next year.

And President Obama, as part of his new vision for NASA, has called for the space agency to pursue a manned mission to a near-Earth asteroid, to move humans out into space beyond the moon.