Accessibility links
Is Criticism Of Goldman Really Anti-Semitism? Investment bank Goldman Sachs has become a symbol of the financial excesses that helped to bring on the recession. The Atlantic's Michael Kinsley finds that because Goldman is thought of as a "Jewish" firm, criticism of it, or of bankers generally, is often labeled anti-Semitic. 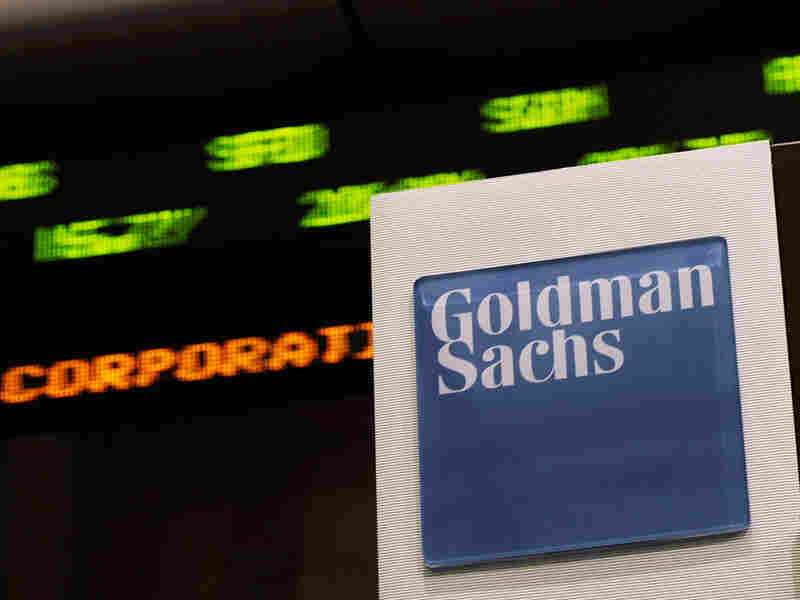 Stock prices whiz by on a ticker near the Goldman Sachs booth on the floor of the New York Stock Exchange on April 16, 2010. Chris Hondros/Getty Images hide caption 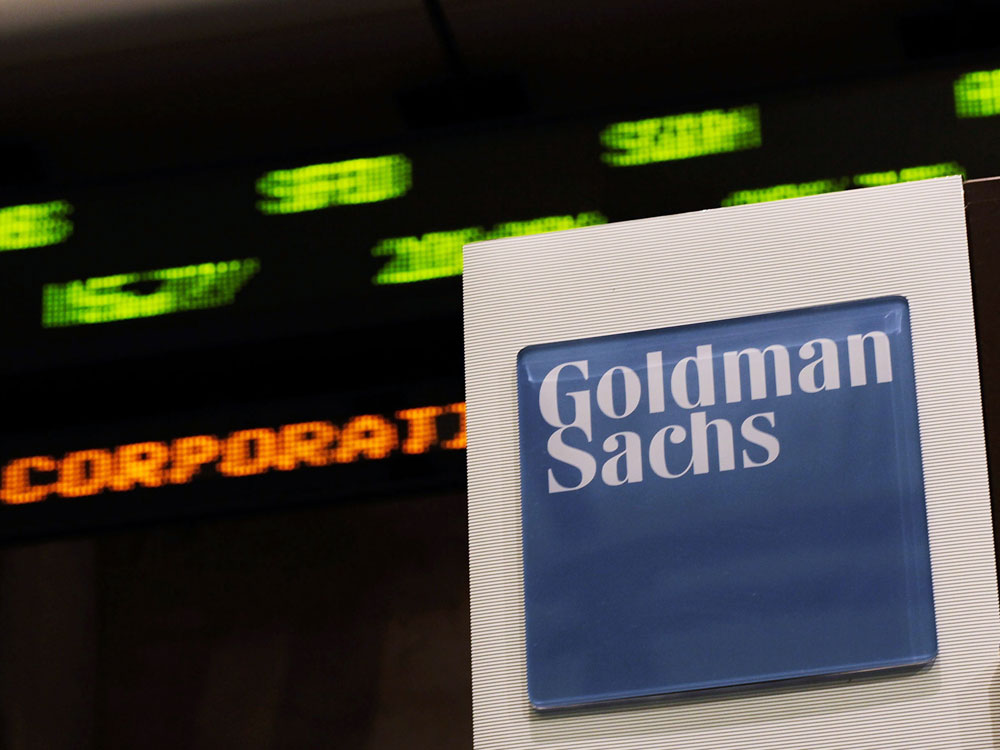 Stock prices whiz by on a ticker near the Goldman Sachs booth on the floor of the New York Stock Exchange on April 16, 2010.

Goldman Sachs, the hugely profitable investment bank, has become a symbol of the financial excesses that helped to bring on the recession. Tuesday, Goldman executives Fabrice Tourre and Lloyd Blankfein were called upon to testify in front of Congress about the bank's role in the mortgage crisis.

The Atlantic's Michael Kinsley finds that because Goldman is thought of as a "Jewish" firm, criticism of it, or of bankers generally, is often labeled anti-Semitic.

In his piece for the AtlanticWire, "How to Think About: Jewish Bankers," he explains what's behind the charge, and when, if ever, such accusations are fair.

The furor around what investment bank Goldman Sachs did and did not do during the financial crisis has been roiling for months. It culminated today in the testimony of two executives on Capitol Hill. Lloyd Blankfein and Fabrice Tourre deny they did anything wrong and did not mislead investors. However, the air of scandal that permeates many conversations about the firm is sometimes tinged with something else, the fear of something ugly.

Goldman Sachs, the name, is distinctly Jewish. Jews, banker, greed, scandal, all of it conjures associations from the past and criticism expressed the wrong way could veer off into anti-Semitism.

Michael Kinsley, columnist for The Atlantic wrote directly about those associations and how to think about them. He joins us in a moment. We want you to weigh in as well. Do you hear something ugly in the criticism of Goldman Sachs? Call 800-989-8255. Email us: talk@npr.org. And you could join the conversation at our website. That's at npr.org, click on TALK OF THE NATION.

And Michael Kinsley joins us now from the studios of The Atlantic here in Washington, D.C. Thanks for being on the program with us.

CONAN: And you begin with the question: when, if ever, are such accusations of anti-Semitism fair?

Mr. KINSLEY: And - because I think there's a real problem in our politics today of umbrage. People are very quick to take umbrage at things other people say. And politician use this to, I think, make bigger deals of things than they ought to.

Abe Foxman, who is the - he's the head of the B'nai B'rith Anti-Defamation League, says that virtually any reference to Goldman Sachs alone in the context of this scandal smacks of anti-Semitism, because he says, you know, what about Morgan Stanley and other firms that aren't Jewish? I think that goes much too far.

CONAN: There is also - you say you haven't read anything that you would take as anti-Semitic. Probably the most controversial thing was a quote in - by Matt Taibbi in a much quoted article about Goldman Sachs...

CONAN: ...where he said that the world's most powerful investment bank is a great vampire squid wrapped around the face of humanity relentlessly jamming its blood funnel into anything that smells like money - a phrase that set off alarm bells.

Mr. KINSLEY: Well, it's a heck of piece. And it's really written with brio. That passage, which has been widely quoted, comes very close to the line, because, you know, it never uses the word Jewish but it invokes a lot of images that are familiar in classic anti-Semitism: the bloodsucking monster, this -the other. And it's smothering the normal life of normal people. All of that has - Jews have been victimized - and I should add - I should mention that I am Jewish - Jews have been victimized by that kind of imagery for centuries.

Now, Matt Taibbi says that he was flabbergasted when someone brought up that question after his piece came out. And that troubled me. If he said, I had no intention of being anti-Semitic, I would believe him. But I can't believe that an intelligent, educated person would find the very idea of that kind of imagery being anti-Semitic surprising.

CONAN: There is another question that you go into, that, of course, Goldman Sachs is a Jewish firm founded by Jews because, well, Jews were not allowed into the protestant firms.

Mr. KINSLEY: That's right. And that - it used to be that there were, you know, a few prominent Jewish investment banks and then there were many prominent Protestant ones. And I don't know what the policy of either of them was in regard to Catholics. But now, of course, there's basically only two big ones left.

CONAN: And that probably the majority of people who work at Goldman Sachs may be Jewish, you say. Nevertheless, there are plenty of Jews, also, at Morgan Stanley.

CONAN: And today, it's a publically traded company, like...

Mr. KINSLEY: Right. And if someone wants a piece of that, they can go to the market and buy one.

JACOB: I - just a bit of context on where I'm coming from. I am Jewish. I was raised in a Jewish family in a very Jewish community. So that's basically where I'm - how I'm looking at all of this. But I can be pretty brief with my question. I just want to toss this out there for, you know, consideration.

If you look back at the bigger tapestry of anti-Semitism versus industry - be it banking, like we're talking about now, even, you know, film industry, construction, what have you - I'm just wondering to what extent Jews have always been a victim of their own success and where the Jewish community has excelled and attained positions of power across various industries, and when things go south, it more or less makes sense to blame the people up top. So I'm just wondering to what end that line of thinking has any merit? I'll take my answer off the air.

Mr. KINSLEY: Well, it has no - it certainly has no merit whatsoever if you mean by line of thinking that somehow other Jews aren't entitled to this success. But if what you mean is that this is one explanation for anti-Semitism, that Jews have gone into fields and thrive there when they've been denied opportunities in other fields, I think you're probably right. And - but I wouldn't go so far as to say they're victim of their success because, netting everything out, success is better.

CONAN: It's important to remember also that going back to the Renaissance, banking was one of the few industries, again, that Jews were allowed to participate in, partly because of Christian laws against loans and that sort of thing. But nevertheless, this was the part of the business that they turned to the Jews for.

Mr. KINSLEY: And another - I mean, you think of Shylock and Shakespeare, my understanding is that Shakespeare had never met a Jew when he wrote that play. So the image of Shylock, which is a classically anti-Semitic image...

Mr. KINSLEY: ...was in the culture, and he absorbed it somehow.

CONAN: Let's get Patrick on the line, Patrick with us from Worcester, Massachusetts.

PATRICK (Caller): Yes, hi. Thanks for taking my call.

PATRICK: I wonder if Jewish people hear these assertions about, you know, potential anti-Semitism in this situation and cringe when they hear this. I'm not a Jew, but I'm - I am highly educated and very intelligent, and I don't - I never once considered that this was an anti-Semitic situation. And I wonder if Jews that have experienced these problems in their lives - you know, anti-Semitism - cringe when they hear this because maybe it's being overused, you know? I mean, whenever you have a situation where somebody overuses a threat or a perceived threat or prejudice and they overused it, it weakens the position of anybody that has a legitimate beef about it. Do you know what I'm saying?

Mr. KINSLEY: Yes, I do know what you're saying. In fact, I use - I don't have my piece in front of me, but I believe that I used the word cringe, exactly that, saying...

CONAN: Patrick, thanks very much. Let's go next - this is Lee, Lee with us from St. Louis.

LEE (Caller): Hi. Well, I kind of echo the previous caller. I see this as a kind of a non-issue of going back to the Middle Ages reference. It's kind of like counting the number of angels who can dance on the head of a pin.

My wife is Jewish, so I understand the concerns. But what typical people think when they hear Goldman Sachs is crook, not Jewish, just the same as when they hear Citibank or any of the rest of the Wall Street crooks that stole all that money and destroyed our economy. The very idea of that, you know, Goldman Sachs somehow represents Jewry in any way is just, you know, silly. And it does trivialize when there are real instances of anti-Semitism out there.

CONAN: All right, Lee, thanks very much for the call. You do write, Michael Kinsley, though, about the perception of the Jews cringing, in fact, that they hear words - some words differently than maybe the rest of us do.

Mr. KINSLEY: Well, yes. I think that caller made a very good point. There has not been an outbreak of anti-Semitism or anything closed to it. But people worry. And given the history over the centuries and even some history in the United States, it's not utterly crazy to worry. I do think - I said that Mr. Foxman goes too far when he suggests that there is anti-Semitism, and that it is in any way to blame for this.

CONAN: You write that sometimes the stereotype about Jews and money takes a harsher form. Jews are greedy. They lie, cheat and steal for money. They have undue influence with the government, which they cultivate and exploit ruthlessly, and so on. In recent weeks, many have said this sort of thing about Goldman Sachs, but with no reference to Jews.

Mr. KINSLEY: Well, there - that's - that was one of the questions I tried to analyze. And I said - as I say, this piece did not take any position. It was to help people think it through. And the question is: Can a statement be anti-Semitic, even if it doesn't specifically refer to Jews? And I think it can, although you should be extremely slow to reach that conclusion. But if the statement, you know, draws on classic, classic themes of anti-Semitism, and if it refers to Goldman Sachs in some sneering way, I think you can - it can cross the line.

CONAN: Michael Kinsley, thank you very much for joining us to help us think this through.

CONAN: Michael Kinsley, a columnist for the Atlantic. He joined us today from the studios of the Atlantic here in Washington, D.C. You can find a link to his article at npr.org.

Your letters next. You're listening to TALK OF THE NATION from NPR News.