Accessibility links
Coast Guard To Begin Burning Oil Slick In Gulf Thousands of barrels of oil have poured into the Gulf of Mexico since a drilling rig exploded and sank last week. Robotic submarines have been trying to shut off the leak without success. Now the Coast Guard is gearing up to burn off as much oil as possible before the slick — 80 miles long and 40 miles wide and growing — makes landfall. 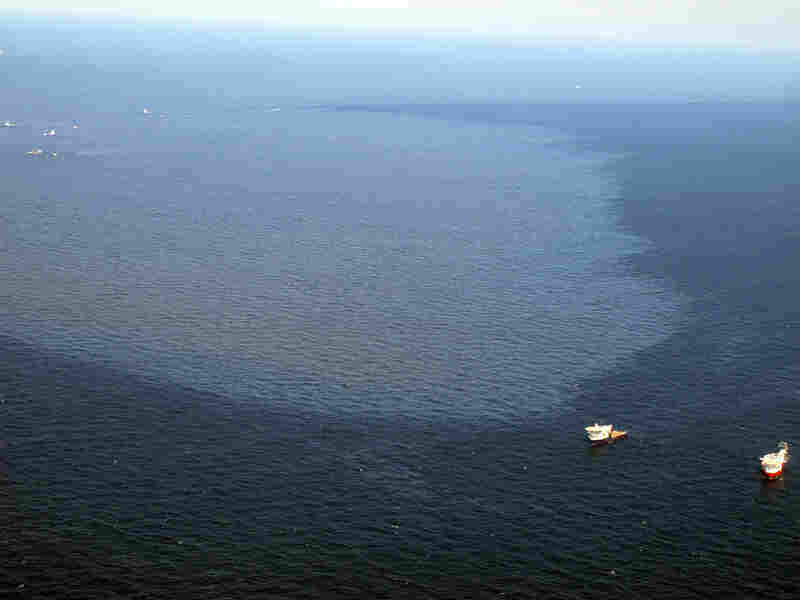 Two ships float near the massive oil slick spreading in the Gulf of Mexico after a drilling rig sank last week off the coast of Louisiana. The slick is 80 miles long and 40 miles wide and growing. Brendan Farrington/AP hide caption 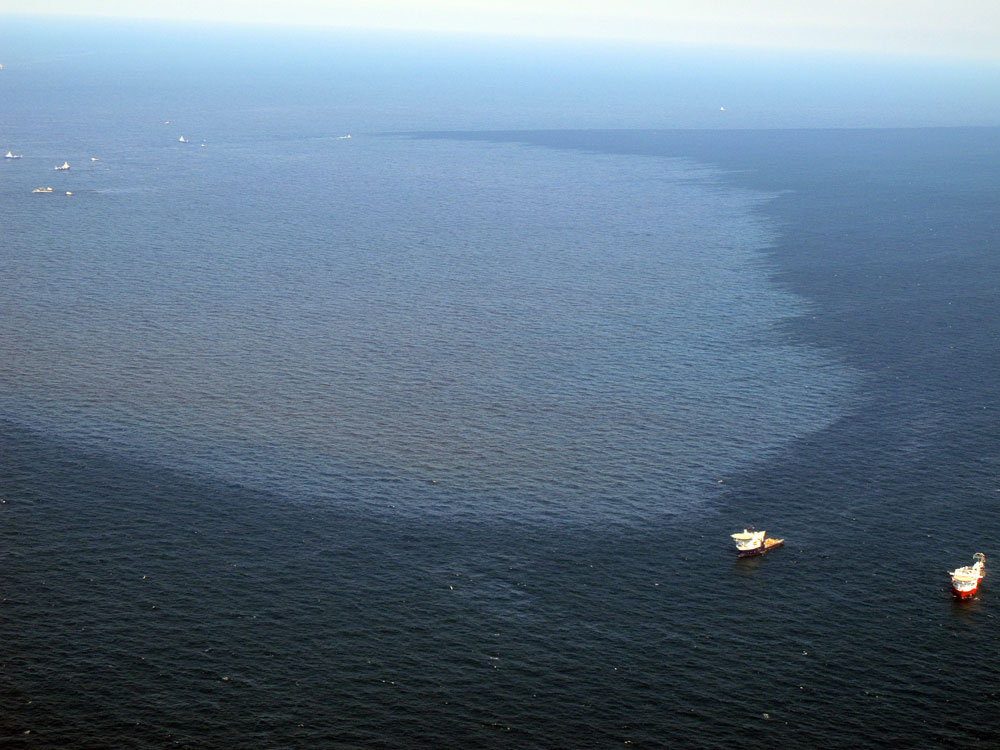 Two ships float near the massive oil slick spreading in the Gulf of Mexico after a drilling rig sank last week off the coast of Louisiana. The slick is 80 miles long and 40 miles wide and growing.

More than 5,000 barrels of oil have poured into the Gulf of Mexico since a deep-water drilling rig leased to BP exploded, caught fire and sank last week.

For the past three days, robotic submarines have been trying to activate a large valve on the floor of the Gulf to shut off the oil leak, but the operation hasn't been successful.

The oil is getting closer to shore; it's within 20 miles of the coast of Louisiana.

The Coast Guard was gearing up to set fire to the Gulf to try to burn off as much oil as possible before the slick makes landfall. Officials said they would begin burning some of the thickest oil, possibly Wednesday.

About 60 people fill the Area Command Center, which is driving the oil spill containment effort 50 miles off the coast of Louisiana. On the back wall are two large projection screens that display the live video feeds from the remotely operated vehicles.

The robotic subs are 5,000 feet below sea level, trying to shut off the leaking oil well. It looks like a small version of NASA's Mission Control in Houston. But unlike the moon, this alien landscape is beyond the reach of human beings, no matter what kind of protective suit they might wear.

"We can see them by individual group -- how many helicopters we've got out there, how many fixed-wing aircraft we have," says John Houston, BP's logistics section chief, who is sitting in front of a computer screen.

Down the hall, a grim-faced group of BP executives and Coast Guard officials relay the latest about the oil leak.

"I'm going to say right up front that BP's efforts to secure the source at the blowout preventer have not yet been successful," says Coast Guard Rear Adm. Mary Landry. "We're possibly 90 days out from securing the source permanently."

This graphic shows the location of the oil sheen produced after the drilling rig exploded and sank. Unified Command Center hide caption

This graphic shows the location of the oil sheen produced after the drilling rig exploded and sank.

The blowout preventer that Landry referenced should have been the first line of defense. It is a massive high-temperature, high-pressure valve rated at 15,000 pounds per square inch. It sits on the ocean floor atop the well casing.

The valve was designed to automatically choke off the kind of catastrophic blowout that is suspected of causing the explosion and fire, killing 11 oil workers and destroying the rig. It also has several backup mechanisms to stop oil from leaking from the wellhead, even after a disaster.

But after three days of failing to activate it, the federal government is moving to plan B. The first element of that plan is setting fire to the crude floating in the Gulf.

"The most obvious result of igniting the oil on the surface of the water is that you generate this black plume," says Charlie Henry, an oil expert with the National Oceanic and Atmospheric Administration. "Although 95 to 98 percent of the oil actually is fully consumed into carbon dioxide and water, you do get some residuals that form, and it's smoke and soot."

The slick is 80 miles long and 40 miles wide and growing. BP is building one of the largest pollution containment devices ever constructed; it will be placed over the leaking well, to capture the oil as it escapes and pump it safely to oil tankers on the surface. But it will take weeks to put in place and become operational.

A new drilling rig was moved into place Tuesday, and as soon as the required permits are in order, it will begin to drill 18,000 feet below the ocean floor.

The new well will then move a mile horizontally, and a drill bit will attempt to pierce the original well's casing.

"This technology is complex, but we are capable of doing it using the latest skills in the industry and our abilities," says Doug Shuttles, BP's chief operating officer. Once we've intercepted the well, we will than inject heavy fluids followed by cement to permanently secure this well and ensure it can no longer flow to the surface."

But this, too, will take weeks to complete.

For the past several days, the predominant winds have been from the north and northwest, and that has kept the slick from coming ashore.

Remotely operated vehicles are trying to activate the blowout preventer, shown here in a file photo, on the sea floor, which should have been the first line of defense to get the leaking oil stopped. Unified Command Center hide caption

Think of the oil like an army, invading from the sea. The best chance the defenders have is to keep the invaders offshore -- destroy them before they can gain a beachhead.

BP is spending $2 million a day corralling the slick with booms and ships and bombing it from the air with dispersants.

BP is using five aircraft continuously, he says, "and we're back to skimming. We're hitting this thing absolutely as hard as we can."

In the meantime, Louisiana, Alabama, Mississippi and Florida are preparing for the worst: hundreds of thousands of gallons of oil fouling their beaches and wetlands.

That won't take weeks; it could begin as soon as this weekend.