Accessibility links
In Search Of India's Red-Tape Factory India, home to a booming high-tech industry, is also home to mountains of paperwork. Our reporter wanted to know why — and where all those forms come from.

India does a brisk business helping multinational corporations automate their businesses. But the country's own business is still buried in paperwork.

Karan Thapar, an Indian journalist, says India's love of paperwork is partly a vestige of colonialism, which gave rise to a class of "petty officials who kept the British Raj ticking along," he says. "You'd have an army of them sitting outside the offices of the British collector or the British viceroy, furiously taking notes [and] devising petitions in pompous officialese." 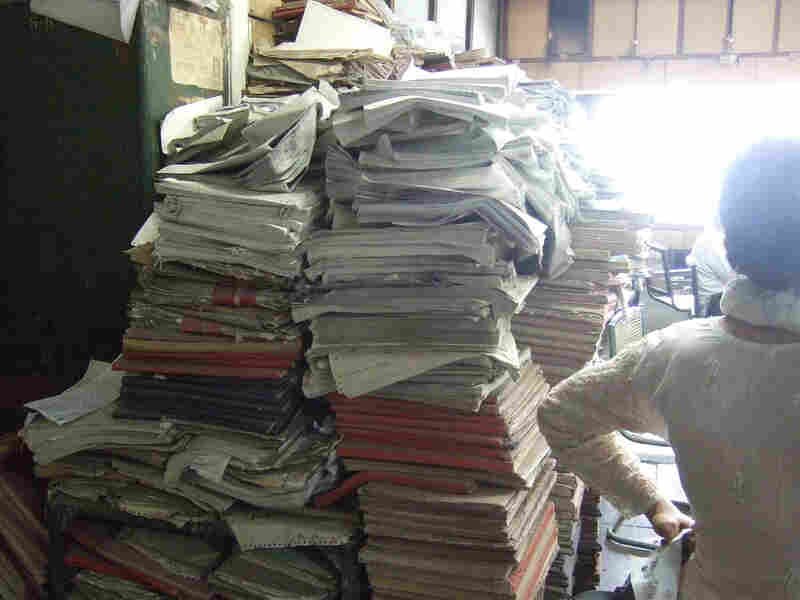 Papers have piled up in a city office in Delhi. David Kestenbaum/NPR hide caption 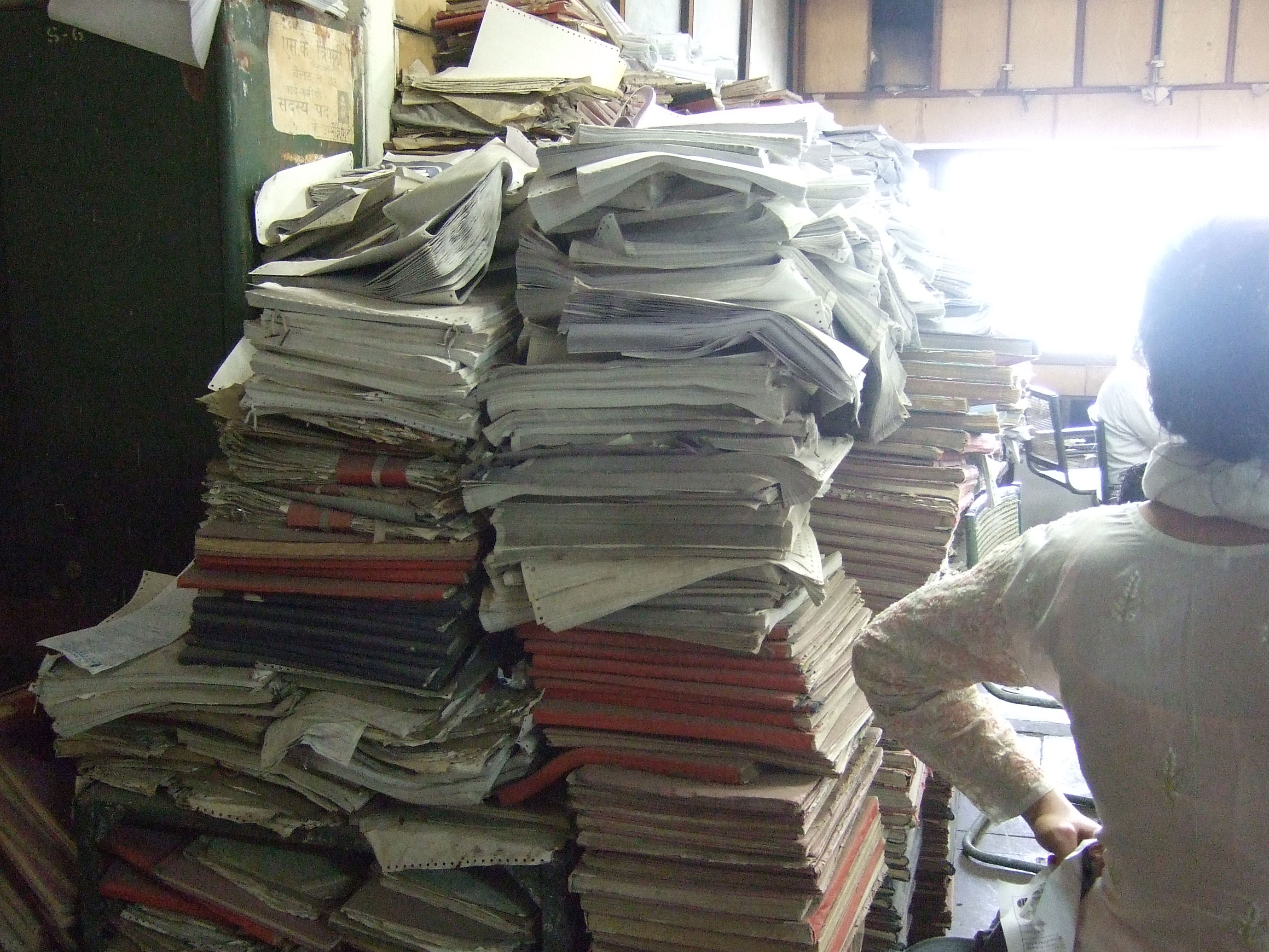 Papers have piled up in a city office in Delhi.

As a result, he says, "Our culture is obsessed with writing on files, sending papers, making notes, petitioning people." And every petition requires a response, which itself must be documented.

"It's a nightmare," Thapar says.

I took the picture at left in a city office in Delhi earlier this month. It suggests that things haven't changed much since Thapar went to the income tax office in 1976 to sort out the affairs of his father, who had just died.

"I walked into this room and I was mesmerized," Thapar says. "There were these stacks that went up all the way to the roof, with mildewed brown files decaying with age, brown with dust." Miraculously, the clerk was able to find Thapar's father's file -- the next day.

This is not the most efficient way to run a tax office, a city government or anything else. Experts say the legacy of colonialism isn't the only reason India remains so paper-centric.

All the paperwork can make it easier for officials to demand bribes in exchange for cutting through the red tape.

What's more, governments in general move slowly. And India is the world's largest -- and some would say most unwieldy -- democracy. So moving away from paper may just take a very, very long time. 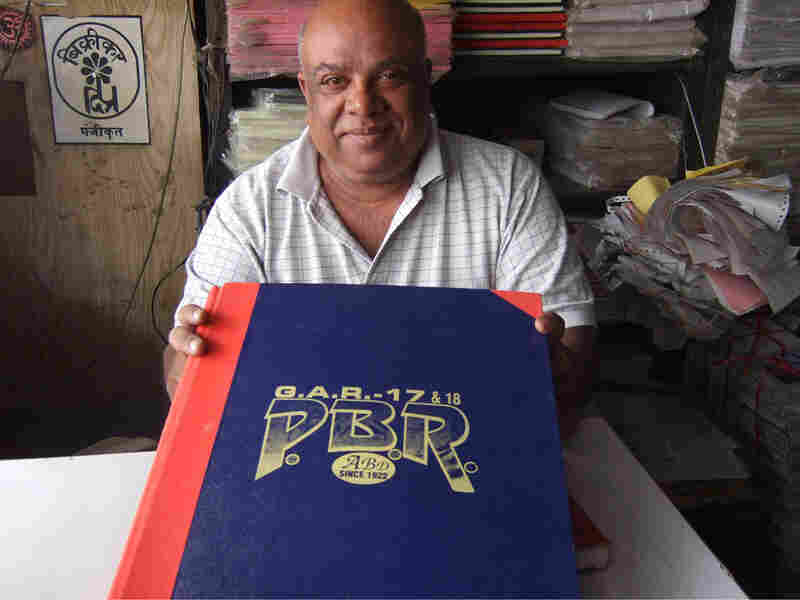 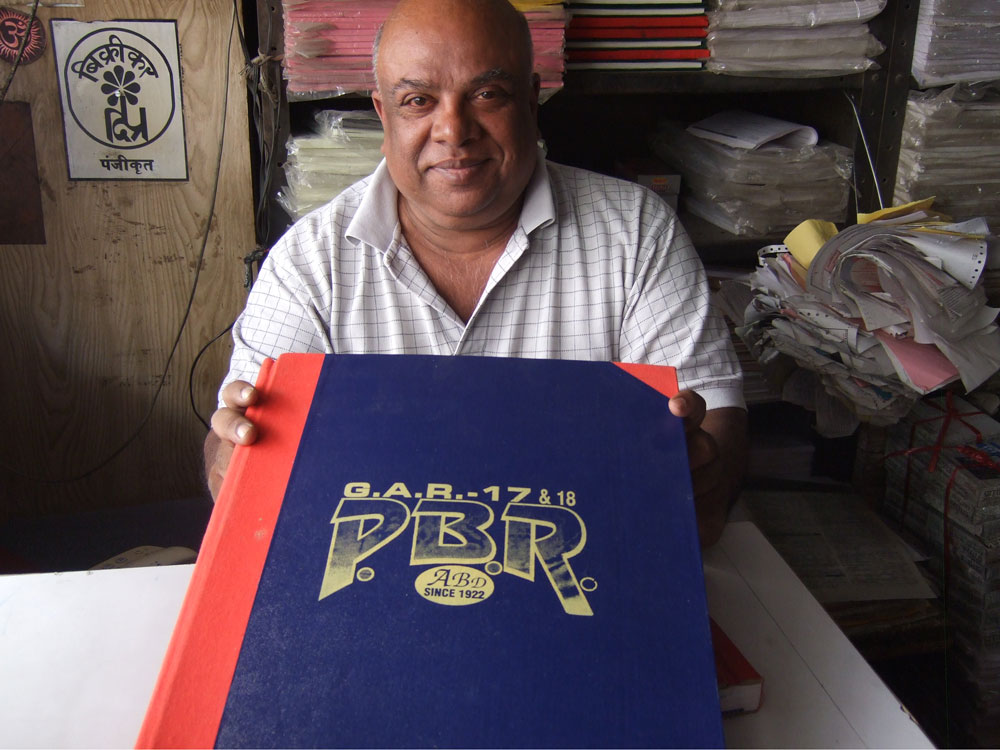 A merchant in Delhi offers a ledger book used to track pay for government employees.

In the meantime, somebody has to sell all of the blank forms required to keep the world's largest democracy chugging along. So I decided to try to find the red-tape factory. A guide took me into the maze of narrow streets that is Old Delhi.

Somewhere in the labyrinth, we found it -- shop after shop selling blank forms, stationery and giant ledgers like the one pictured at left.

It's intended for some government clerk who needs to keep track of employees. Each page has 40 columns -- "overtime," "licence fee," "motor conveyance advance." There's even a column for "computer advance."

"Actually, it's a dying industry," the store's owner, Kamaljeet Singh Bajaj, says. "People are going for computers and computerized billing."

He says sales of carbon paper have fallen by about 75 percent over the past 30 years.

"There was a time when carbon was a hot-selling item," he says. "But now, you see, not so much."

That's bad for Bajaj, but it may be good for everyone else.