Accessibility links
A Comedic Double Header By Chabrier And Rossini From frustrated newlyweds who don't know what to do with each other, to an arranged marriage of inconvenience, this double bill from Ireland's Wexford Festival features the little-heard short operas The Marriage contract by Rossini and An Insufficient Education by Chabrier.

2:27
A Comedic Double Header By Chabrier And Rossini 2:27

A Comedic Double Header By Chabrier And Rossini

From The Wexford Festival 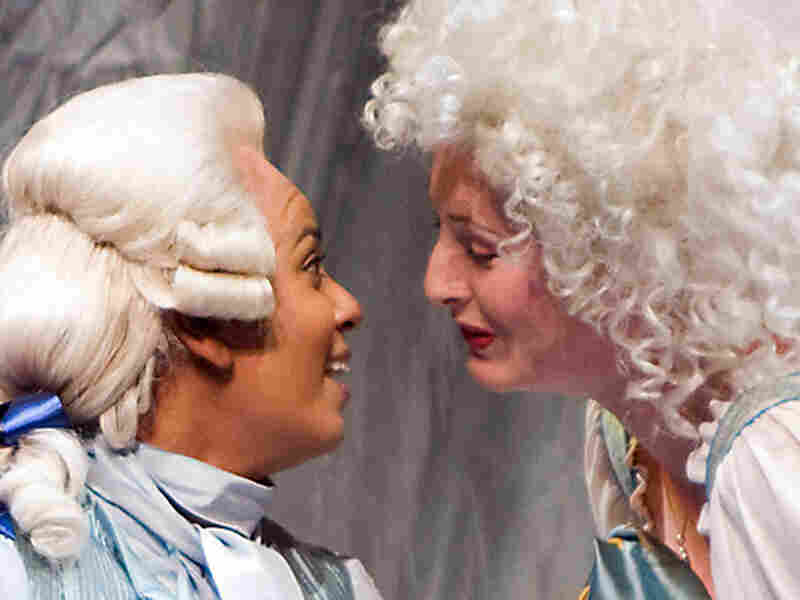 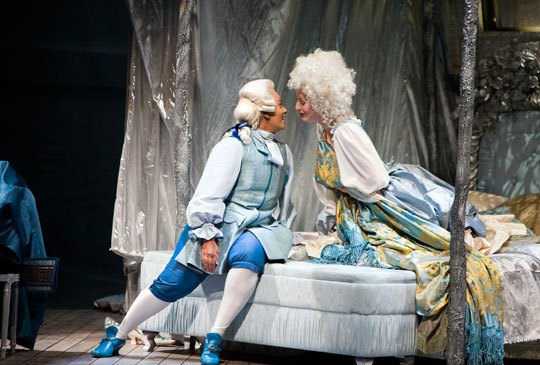 Kishani Jaysinghe, left, as Gontran and Paula Murrihy, as his wife Helen, star in the Wexford Festival's production of Chabrier's opera An Insufficient Education.

Late in An Insufficient Education, the frustrated newlyweds Helene and Gontran (mezzo-soprano Paula Murrihy and soprano Kishani Jayasinghe) finally have their "aha! moment." Huddled together during a thunderstorm, they realize that the kiss they've just shared had a decidedly different feel to it than the little peck they timidly attempted earlier and — at last — nature takes its course.

Duet from 'An Insufficient Education'

It's an odd fact of human nature that we often cloak the most sensitive subjects in seemingly innocuous terms -- sometimes two or three layers deep.

Take "the birds and the bees," for example. It's a seemingly innocent euphemism for "the facts of life" which, of course, is also a euphemism. Both are used to approach one of the most sensitive topics of all: that certain subject that arises when kids start asking ticklish questions.

It's a conversation few parents relish. Still, it's better to have that little talk than not -- which is demonstrated with insight and charm by one of this week's featured operas, a one-act comedy written in 1879 by Emmanuel Chabrier. It tells the story of a starry-eyed pair of newlyweds who arrive at home on their wedding night with, as the opera's title puts it, Une éducation manquée -- An Insufficient Education. You can probably guess what that means; it seems this couple's parents never bothered with that chat about the birds and the bees.

In The Marriage Contract, when Fanny (soprano Pervin Chakar) realizes that Slook is willing to let her marry Edoardo, she responds with the fiery aria, "Vorrei spiegarvi il giubilo."

Fanny's Aria from 'The Marriage Contract'

Following Chabrier's charmer, this double bill of contrasting comedies features a romantic farce from about 70 years earlier: Gioachino Rossini's Il Cambiale di Matrimonio, or The Marriage Contract. It was the composer's first professional opera, written when he was still a teenager, yet it plainly anticipates the brilliance of his mature, comic style. Some of its music was recycled in later operas including The Turk in Italy and even The Barber of Seville, one of the greatest operatic comedies of all time.

On World of Opera, host Lisa Simeone brings us both operas from a venue that's new to the program, the Wexford Opera Festival in Ireland. The stars include sopranos Kishani Jayasinghe and Pervin Chakar, along with mezzo-soprano Paula Murrihy and tenor Giovanni Botta.

The Stories of the Operas 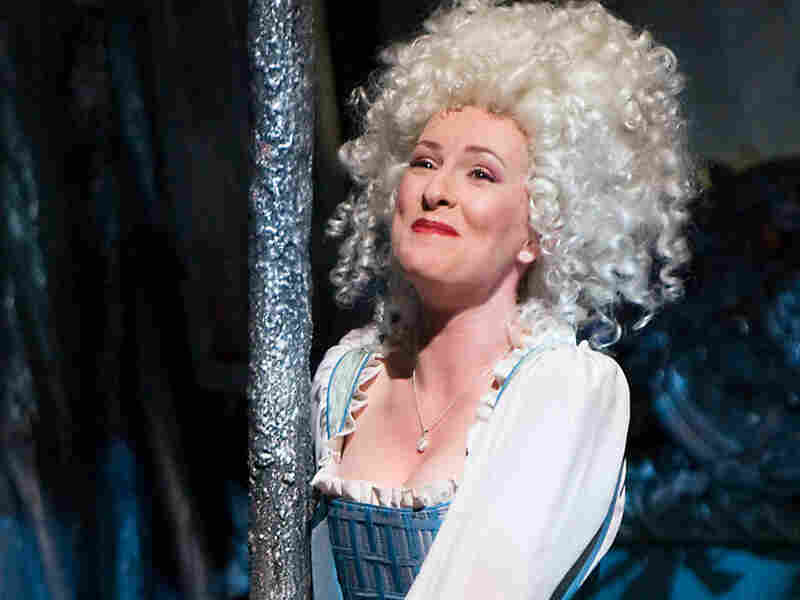 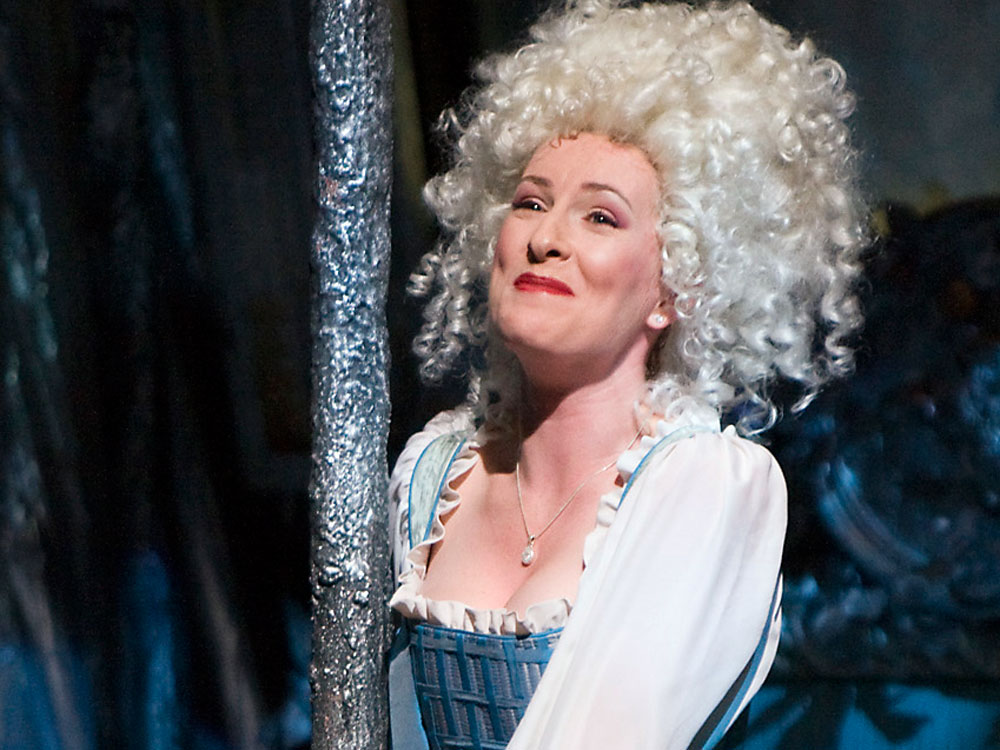 Paula Murrihy plays a clueless bride in Chabrier's "An Insufficient Education," from the Wexford Festival. 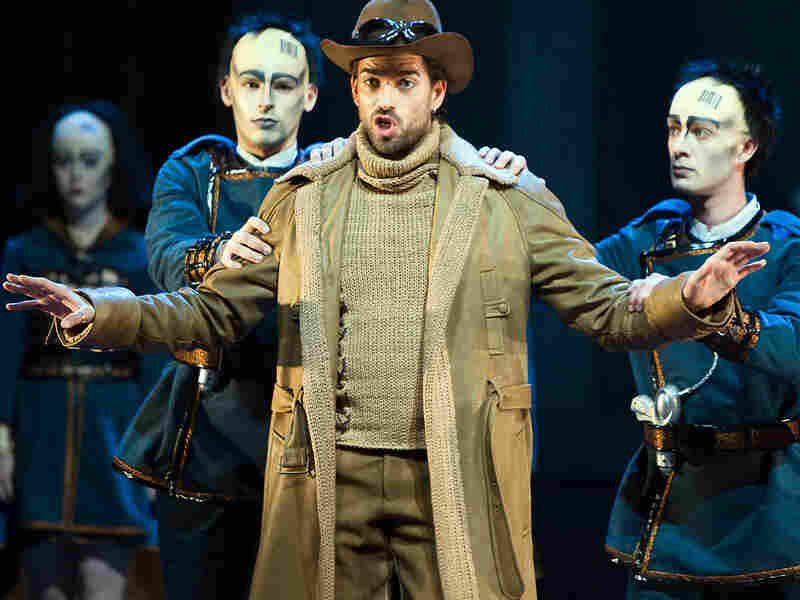 Vittorio Prato, as the Canadian, Slook, is searching for a wife in Rossini's "The Marriage Contract," from the Wexford Festival. hide caption 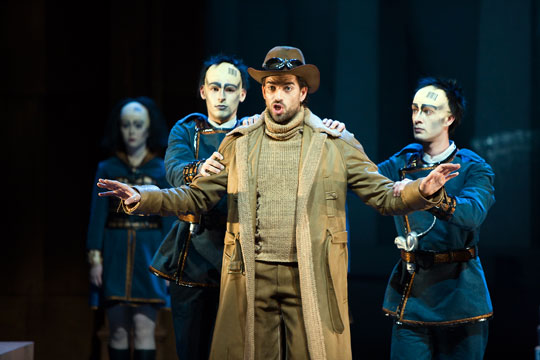 Vittorio Prato, as the Canadian, Slook, is searching for a wife in Rossini's "The Marriage Contract," from the Wexford Festival.

Emmanuel Chabrier's comedy takes place in France during the time of Louis the XVI. The newlyweds Helene and Gontran have arrived at home, after a big wedding celebration, and they're ready to spend their first night together -- but they don't seem to know what comes next.

Helene was married straight out of the convent, where she was raised. She's expecting the arrival of her favorite aunt, who has promised a bit of wedding night advice. Gontran has spent his youth in the company of a bookish tutor, Professor Pausanias, who is supposedly bringing Gontran's grandfather to the house for some similar, last-minute instructions.

Much to Helene's relief, her aunt soon knocks at the door, and Helene eagerly goes off to hear what the older woman has to say. While she's gone, Pausanias also turns up -- but without Gontran's grandfather. Instead, he has a letter from the old man, who is suffering an attack of gout and can't leave his bed.

When Pausanias leaves, Gontran tears open the letter, hoping to absorb its much-needed wisdom before Helene returns. But all the letter says is that Gontran is a wise young man, his wife is kind and beautiful, so surely no further advice is needed. Beginning to panic, Gontran goes off to find Pausanias.

When Helene returns, she hasn't done any better. Her aunt has simply told her to "obey" her husband, and all will be well. In a tender aria, Helene says she feels a strange excitement, and wonders what it is.

When Gontran appears again, Helene decides to follow her aunt's advice, and do whatever he suggests. Gontran says their next step should be a kiss, and she agrees. He takes her hands, gives her an innocent little peck, and acts as though all is well. Helene seems to sense that something more is in order -- a prospect that frightens Gontran. Finally, Helene says she's getting tired. She leaves for her own room, to go to sleep, telling Gontran that if he thinks of anything else he should let her know.

Gontran thinks he's being mocked. He calls Pausanias into the room and angrily accuses his tutor of failing to educate him properly. Pausanias is indignant. In a comic duet, he rattles off a long list of all the academic subjects he's explored with Gontran. But when Gontran tells him exactly what he needs to know now, Pausanias is clueless. He's spent too much time with esoteric books to have bothered with the practical side of life. Pausanias leaves, promising to find the required information.

A storm builds outside, and Gontran begins undressing for bed. As he stares gloomily out the window there's a rumble of thunder. Soon, Helene rushes in. She's now wearing a slinky nightdress, and Gontran is embarrassed at being caught in his skivvies.

Helene is trembling, and says the storm has frightened her. Gontran doesn't like it either, and they decide to huddle together for comfort. When they sit down on the bed, huddling soon turns to cuddling -- and they kiss again. This kiss, they both exclaim, was far different from their last one, and before long the two are embracing passionately.

Pausanias returns, peeks into the bedroom, and knows that his advice is no longer needed. He leaves the newlyweds alone as the opera ends.

Gioachino Rossini's farce is set in an English village, at the home of a wealthy merchant named Tobias Mill. Mill's two servants, Norton and Clarina, are watching as their boss examines a map of the world.

Mill has been corresponding with a businessman from across the Atlantic, in Canada. The Canadian's name is Slook and it seems he's having trouble finding a wife in the new world. So he's made a formal contract with Mill, to find him a bride in England.

Mill, it turns out, has a young, single daughter named Fanny, and thinks a rich husband would be just the right thing for her. So he decides to marry her off to this exotic stranger from Canada -- who will arrive soon to look over his "merchandise" before finalizing the deal.

Fanny has other ideas. She's in love with a poor young man named Edoardo -- but they know her father wouldn't approve, so they've kept their relationship quiet. When Slook turns up and meets Fanny, he's thrilled with her. But she and Edoardo, who is presented as her "friend," make it clear that Slook had better head back to Canada pronto -- without Fanny -- or else.

Slook has no idea why the two young people are so hostile, but he does know trouble when he sees it. So he tries to break his contract with Mill -- who is outraged by this, and challenges Slook to a duel.

Finally, before things can truly get out of hand, Fanny and Edoardo confess that they're in love. Slook, who turns out to be quite the gentleman, has no intention of marrying Fanny against her will. So without telling her father, Slook amends their contract, signing his bride over to Edoardo -- and even making the happy young couple his heirs. Mill is forced to accept the arrangement, and in the end, reluctantly agrees that it's probably best for all concerned.