The New Republic: The End Of The European Church

The New Republic: The End Of The European Church 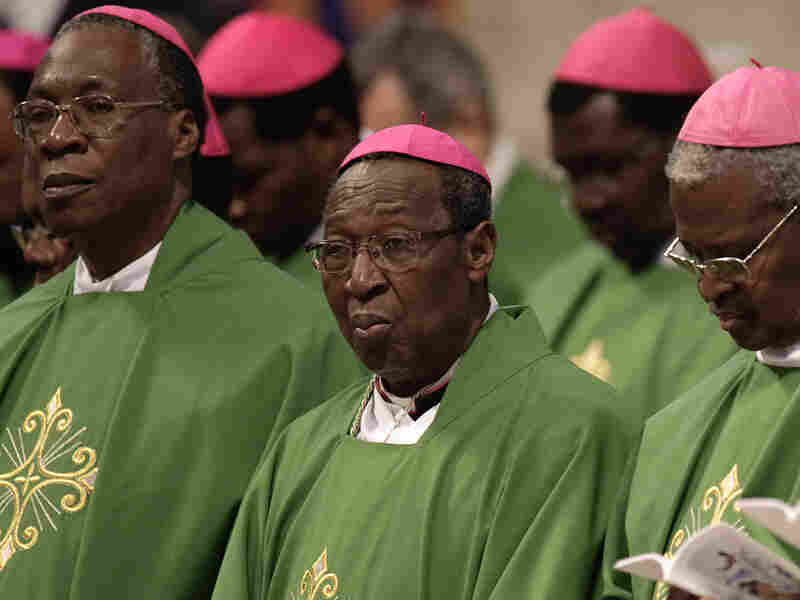 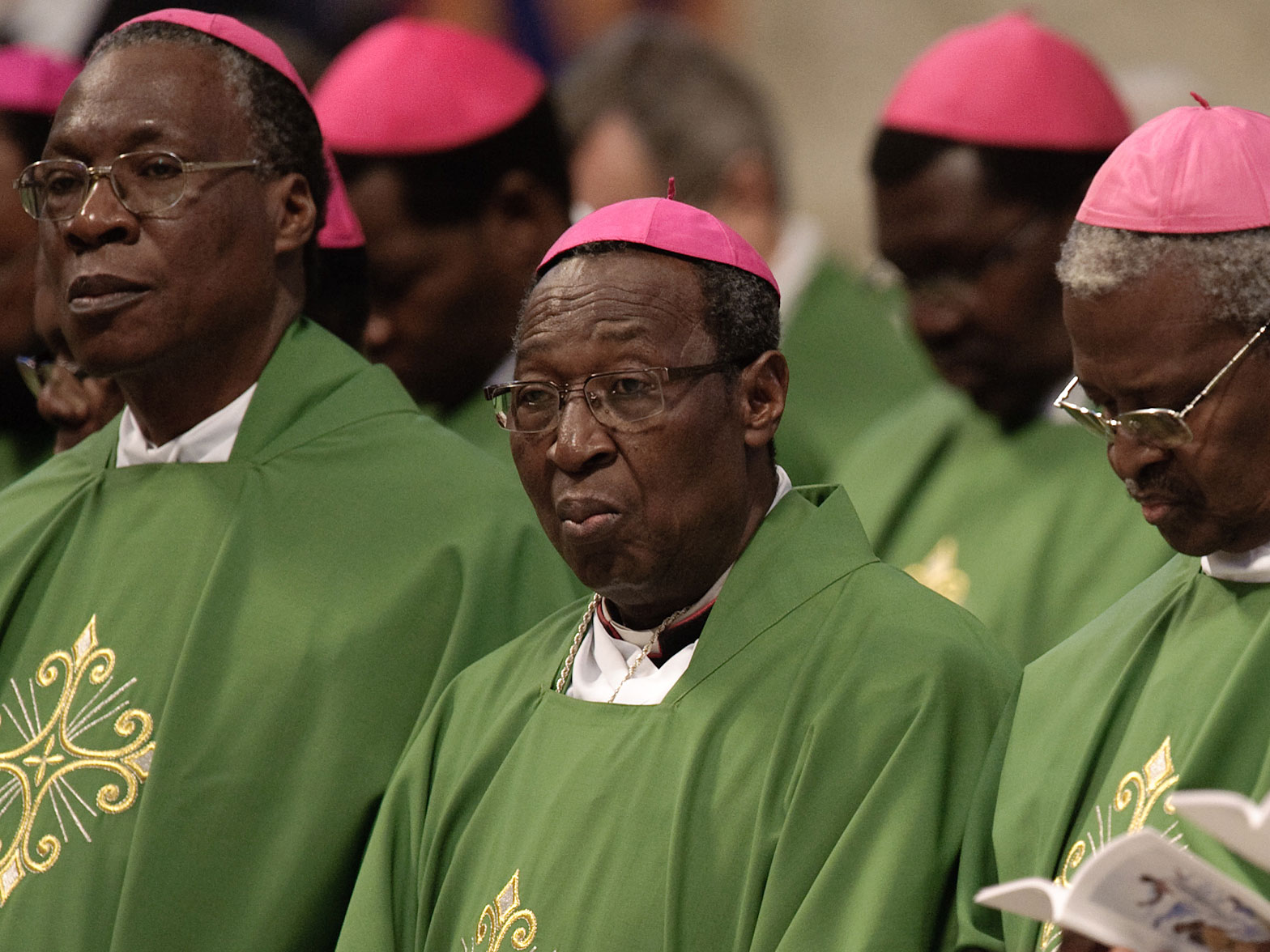 African bishops and cardinals attend a mass celebrated by Pope Benedict XVI in Saint Peter's Basilica at the Vatican.

These are obviously dark days for the Roman Catholic Church. For over a decade, the U.S. church has been assailed by abuse charges and devastated by the resulting litigation. The Vatican used to console itself with the belief that this was a peculiarly American crisis, but, this year, similar abuse cases have arisen all over Europe -- most agonizingly in Ireland, one of the world's most faithfully Catholic countries. Across the continent, bishops are facing demands to resign, while critics are urging Pope Benedict himself to consider standing down. Some media commentators are even asking if the Church can survive the crisis.

But most evidence suggests that the Church will endure and even enjoy a historic boom -- just not in places it has flourished historically. For years, its core has been migrating away from Europe, heading southward into Africa and Latin America. Some Church observers have remarked that the Vatican is now in the wrong location: It's 2,000 miles too far north of its emerging homelands. The recent abuse scandals will accelerate this radical shift, discrediting older European elites and opening the door to new generations of leaders who are more attuned to the needs and concerns of believers in the southern hemisphere. Literally, the Catholic world will turn fully upside down.

For centuries, the Catholic Church was unquestionably strongest in Europe. In 1900, the continent accounted for perhaps two-thirds of the Church's nearly 270 million members. Latin America had another 70 million believers, while Africa barely appeared on the map, with about two million followers. As Anglo-French sage Hilaire Belloc proclaimed in 1920, "The Faith is Europe and Europe is the Faith."

Since then, and especially since the 1960s, Catholicism has been moving south. Partly, this is due to evangelism sponsored by the Church and its religious orders; new conversions, for instance, have surged in Africa. But shifting demographics have also played its part: While populations have increased modestly in Europe, they have boomed across the global south -- and Catholic numbers have grown apace. Today, the world has 900 million more Catholics than it did in 1900, but only 100 hundred million of those new additions are Europeans.

In part, European Catholicism has been declining because of a general trend toward secularization and religious indifference. Recent survey evidence, for instance, shows only half of the French claiming to belong to the Church -- down from about 80 percent two decades ago. There has also been a massive decline in practice of the faith. Particularly in Western Europe, millions of Catholics are members of the Church only in the technical sense of having been baptized; they never darken the door of a church, and don't support official Church policies on issues of morality or sexuality. At the turn of the millennium, only around 18 percent of Catholics in Spain and 12 percent in France reported attending weekly mass; the figures for Germany, Austria, and the Netherlands ran between 10 percent and 15 percent.

Latin America, in contrast, is now by far the world's most Catholic region. Rapid population growth over the past century has boosted the official number of believers to around 460 million, and this number should rise to 600 million within two decades -- comprising some 45 percent of the Church's worldwide membership. Vatican statistics show Brazil as the world’s largest Catholic country, with 160 million believers, or around 85 percent of the population. (More reliable estimates suggest that 65 percent of Brazilians are Catholic, because of the rise of fervent Pentecostal churches. Still, the number of Catholics is huge.)

Africa, meanwhile, is the scene of a religious revolution. During the twentieth century, Christian numbers boomed across the continent, and Catholics did particularly well. In 2000, Africa had 130 million Catholics, which, as Vatican observer John Allen, Jr. points out in his book The Future Church, represented a growth rate over the century of 6,700 percent. By 2025, there should be at least 220 million African Catholics, making up around one-sixth of the Church's worldwide membership. (I say "at least" because the African Church is likely under-counting its followers as it lacks the institutional framework to track what's happening on the ground. According to the Gallup World Poll, the number of Africans claiming to be Catholic is already pushing 200 million, which is more than 20 percent larger than any official Church figure.)

By 2050, according to projections, Africa will have far more Catholics than Europe. Indeed, projections show that, by the half-century mark, Europe will account for perhaps 15 percent of Catholics -- and many of those will be immigrants from Africa, Asia, and Latin America.

So, while the Catholic Church will remain a major -- likely still the major -- player in the world's spiritual economy, it will be a very different entity. And its transformation will only be hastened by the current abuse crisis.

Previous abuse scandals, such as those in the United States in the early 2000s, had no obvious effect on Catholic adherence in Europe. Yet the recent allegations, which hit Germany, Ireland, Belgium and other European countries, will resonate deeply on the continent, especially since charges of official negligence seem to reach to the pope himself. The impact will be particularly strong in Western Europe, with its powerful media that are increasingly antagonistic toward the Catholic hierarchy and even the Church itself.

We can't gauge precisely what impact the crisis will have on the Church's European membership -- though, according to the Forsa Institute, perhaps one-fourth of German Catholics are considering leaving the Church. At a minimum, the crisis will likely alienate already lukewarm Catholics and marginalize the minority of devoted believers. It will also severely diminish Church finances, particularly in countries where citizens opt to devote a portion of their taxes to religious and charitable causes: Expect a heavy diversion of funds away from Catholic causes.

Media coverage of the abuse and the Vatican's mangled response will also provide ample ammunition for those who want to keep religion out of the political realm. European opponents of the Church will find it much easier to silence the Vatican's voice in future legislation concerning issues like abortion, gay marriage and adoption, or reproductive technologies. In any of these controversies, the rhetorical conflict is easy to predict: When Church leaders cite the defense of children and their rights as their reason for backing or opposing policies, secularist critics will immediately point out that bishops and cardinals haven't always been so concerned with children's welfare. It will be a tough criticism to counter.

But the effects of the abuse crisis will be far smaller in Africa and Latin America, where religious loyalties are intimately connected with complex social and familial networks. (African Catholicism, for example, is still tied up with loyalty to family, region and ethnicity, a sacred geography and history -- much like the system that existed in Europe in bygone centuries.) The secular media also don’t enjoy the same pervasive presence in Africa and Latin America that it does in Europe, and the Church has its own powerful media voices that will defend the faith. If abuse revelations do drive some Catholics away from the Church -- and perhaps to rival faiths -- then those people were probably on the verge of defecting anyway. The exposes will just have provided a final push.

Indeed, as the crisis quickens the wane of Europe's Catholic influence, it will help solidify the Church's new roots in the south. Membership there will continue to burgeon, and Church's hierarchy will increasingly be paved with southern clerics. When the time comes to choose someone to succeed Pope Benedict XVI, the cardinals, acutely aware of the effects of the abuse crisis, will probably consider more innovative international candidates, untainted by European connections. A Latin American pope would be a likely choice. Yet, in speculating what the Church might look like in 2050, John Allen imagines an African pope who would represent the interests of his home continent on the world stage. It is very possible that the abuse crisis will only push this scenario closer to the present day; the next time the cardinals must choose a new Vatican leader, they may ask, why not an African?

By that point, perhaps, some keen theorist may be boasting, "Africa is the Faith." And who would dare question the statement?

The End of the European Church, By Philip Jenkins

Our Ridiculous Fetish for ‘Ideas’, By Leon Wieseltier

Ornstein vs. Gingrich: Is Obama the ‘Most Radical’ President Ever? By Norman Ornstein

There Are Nine Scenarios for Imminent Apocalypse (And Only One is Global Warming), By Bradford Plumer

The Psychology Behind America’s Immigration Hysteria, By John B. Judis

From THE BOOK: Adam Thirwell’s Latest Lifts Him Closer to the Top Flight of British Novelists, By Adam Kirsch

Should the Democrats Pursue Immigration or Climate Change? How About Neither. By William Galston

Why the New Play About Mark Rothko Isn’t Just Lousy--But an Affront, By Jed Perl