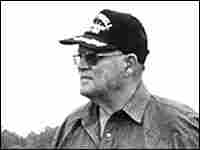 Rudi Bohlmann, photographed on his farm in Menno, S.D., is still haunted by the devastation he witnessed when he arrived in Nagasaki, Japan, more than a month after the U.S. bombing of the city. Greg Latza/PeopleScapes hide caption 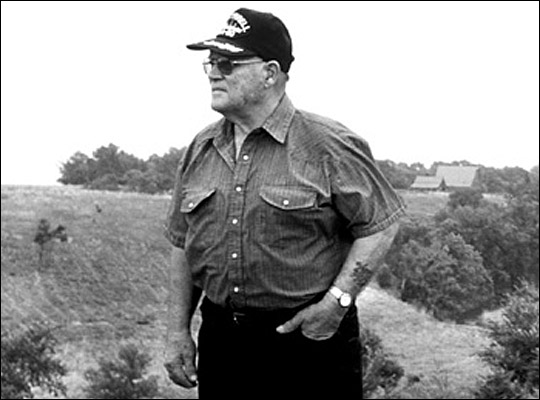 Rudi Bohlmann, photographed on his farm in Menno, S.D., is still haunted by the devastation he witnessed when he arrived in Nagasaki, Japan, more than a month after the U.S. bombing of the city.

On Aug. 9, 1945, the United States dropped an atomic bomb on Nagasaki. More than 70,000 people died in the explosion that hastened the end of World War II.

It took a month and a half for American ships to deploy to the port city. Even then, the sailors were overwhelmed by the obliteration.

South Dakota farmer Rudi Bohlmann was one such sailor.

He served aboard the USS Tyrrell, the first ship to dock at Nagasaki, Japan. Sixty-two years later, Bohlmann is still haunted by his visceral memories.

The Tyrrell was an attack cargo ship carrying Marines and supplies for the planned invasion of the Japanese mainland. The war — and those plans — ended with the atomic bomb.

Bohlmann's ship received orders to sail to Nagasaki, where the sailors could smell the stench of death before they arrived.

"We knew something was up — the stink," Bohlmann says. "You just about gagged, just by breathing it. I hadn't eaten breakfast yet that morning, 'cause I'd just come off watch. And I couldn't go eat. Nobody could eat."

Bohlmann remembers how sailors tossed oranges and apples down to two Japanese boys who helped tie the ship to the dock. The starving boys — covered in festering sores and exhibiting other symptoms of radiation sickness — devoured every one.

The boys were the only living people anyone on the Tyrrell saw in Nagasaki — and the ship moored there for five days. Bohlmann could see the power of the bomb wherever he looked.

Massive cranes in the shipyard were crumpled like pretzels, Bohlmann recalls. He says when looked through binoculars, he couldn't even make out where streets had been — just a few concrete foundations here and there, the stone remains of a shrine.

Bohlmann took photographs and mailed them home. Later, he found out military censors had destroyed them. Still, his vivid memories endured.

When Bohlmann came home from the war to South Dakota, his father wanted to celebrate his safe return with smoked fish, then a real delicacy on the prairie. But for Bohlmann, it only reminded him of what he'd experienced at Nagasaki.

He took one bite, got up, walked outside, and threw up. His mother asked what was wrong, and he told her he could not eat the fish.