Accessibility links
Jonathan Batiste Band On JazzSet When he's not amazing you with a melodica improvisation or his Chopin-esque Jelly Roll Morton piano style, Batiste unfurls a virtuoso "funque" style -- that's funk with baroque ornamentation. Batiste introduces his 12-piece band as part of this show from the Kennedy Center Jazz Club. 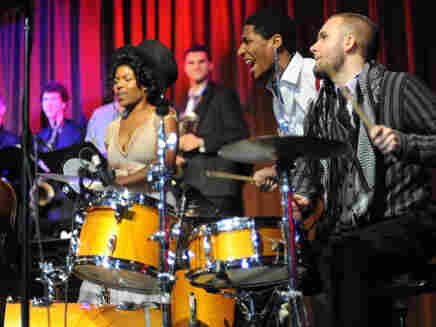 "You and I" (Ivan Lins with lyrics by Batiste)

"Embraceable You" (George and Ira Gershwin)

When he's not amazing you with a melodica improvisation or his Chopin-esque Jelly Roll Morton piano style, Jonathan Batiste unfurls a virtuoso "funque" style -- that's funk with baroque ornamentation.

Batiste has it all: He's 24, from a deep New Orleans music family, a Juilliard graduate, Cassandra Wilson's pianist, leader of his own stomping trio. And now, he steps it up with a full sax section and three brass players in the Jonathan Batiste Band.

One saxophonist is 15, two are twins and one twin doubles on bass clarinet. When they all blow together, it's as if a jubilant ball of yarn is unspooling, rolling around the room, and cannot be stopped. Batiste's writing would make just about anyone smile.

Batiste has put together a great show with vocals by himself and Jennifer Sanon, a past honoree of the Essentially Ellington High School Competition at Jazz at Lincoln Center. Jennifer is pitch perfect in "Moon River" and "Embraceable You." Her second job in the band is in the percussion section.

The musicians drove through a raging February snowstorm to get to Washington, D.C.'s Kennedy Center for this JazzSet. This is the band's first released recording, outstanding in Surround Sound.