Accessibility links
EMILY's List, Mother Of Women's PACs, Seeks Younger Supporters A pioneering women's political action committee, EMILY's List counts among its alumnae several Obama Cabinet members, including Secretary of State Hillary Clinton. But as it turns 25, the group is looking to maintain its relevance and reach with younger women by focusing beyond the abortion wars. 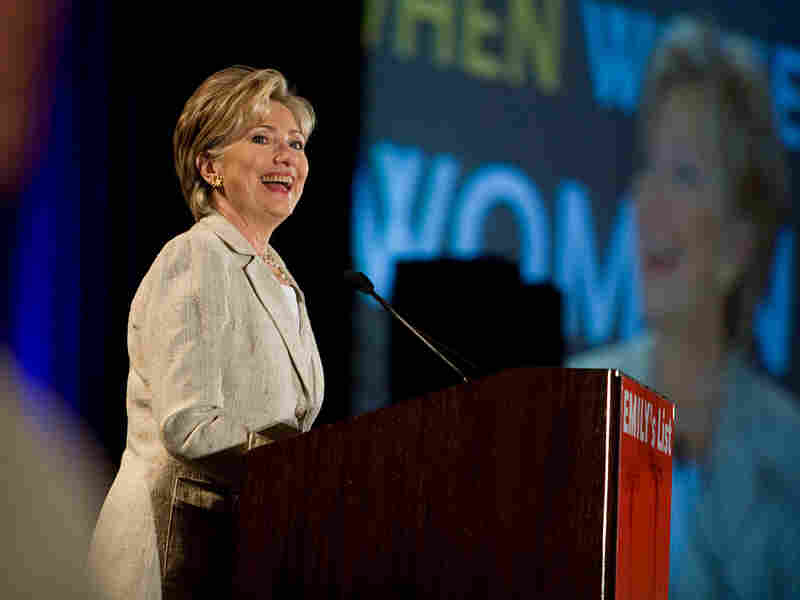 EMILY's List reports collecting more than $78 million for women candidates since its founding — including nearly $3.2 million in 2008, when it endorsed Hillary Clinton for president. Max Whittaker/Getty Images hide caption 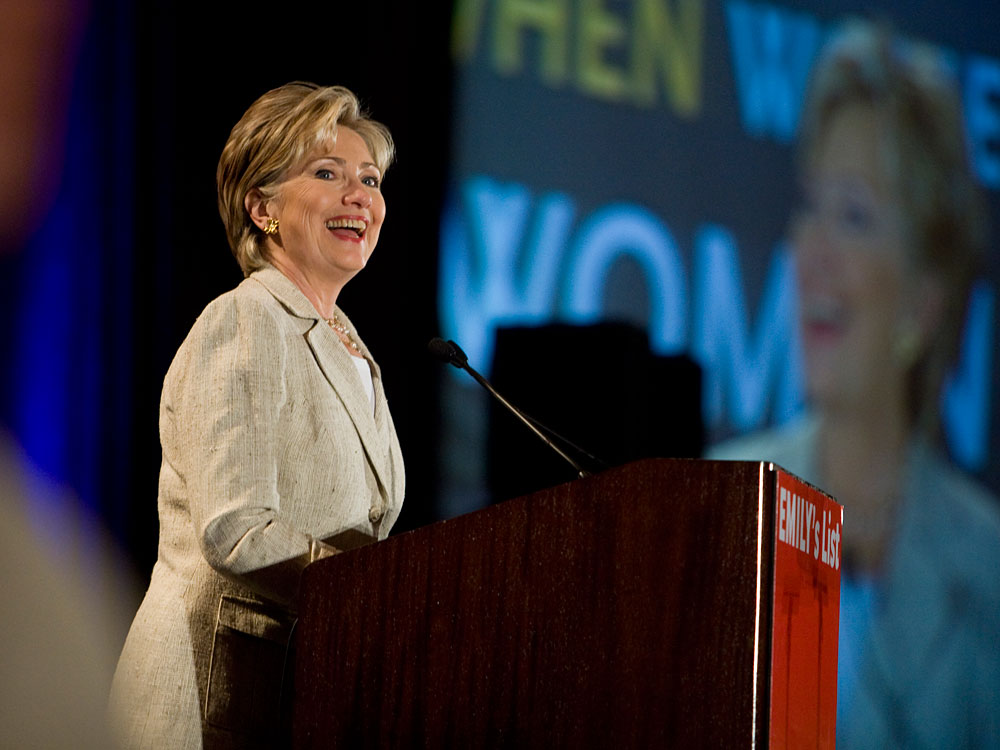 EMILY's List reports collecting more than $78 million for women candidates since its founding — including nearly $3.2 million in 2008, when it endorsed Hillary Clinton for president.

Few events loom larger in the annals of recent feminist history than the gathering of a couple dozen women 25 years ago to raise money to elect female Democrats who supported legal abortion.

From that humble meeting, famously held in founder Ellen Malcolm's basement, emerged EMILY'S List -- one of the nation's most potent political action committees and pioneer of the practice of "bundling" small donations to infuse individual campaigns with big money.

As the list, dubbed EMILY'S for "Early Money Is Like Yeast," marks its quarter century this week, the organization and Democratic women in elective office -- including Pelosi, the first female speaker of the House -- are toting up successes.

But the celebration comes at a time when the organization is also looking to maintain its relevance and reach with younger women for whom abortion may not be a central issue -- and in a political and technological world vastly different from the one the founding women and their Rolodexes tackled in 1985.

It reports collecting more than $78 million for female candidates since its founding -- it spent nearly $3.2 million in 2008, when it endorsed Hillary Clinton for president.

It has a list of more than 350,000 supporters, donors both proven and potential. And its endorsements still give instant credibility to a candidate.

Even those who are on the other side of the abortion issue credit the organization with perfecting the art of bundling and for galvanizing a donor base around a single issue.

Marjorie Dannenfelser, who heads the Susan B. Anthony List, which raises money for female candidates who oppose abortion, says her organization is one of many that very likely wouldn't exist if not for the template provided by EMILY'S List.

"I obviously disagree with the content, but the institutional model was groundbreaking," Dannenfelser says. "I admire Ellen Malcolm's determination and competence at doing it."

It was the "target your assets and get the job done" business attitude of Malcolm's group, Dannenfelser says, that inspired her own efforts.

Diluted Influence: A Pitfall Of Success

But the success of Malcolm's group has, in recent years, ended up diluting some of its once unrivaled clout. In addition to Dannenfelser's group, EMILY'S List has also encouraged the formation of other Democratic groups, like Emerge America, that support and help train femlae candidates.

"We've seen an upsurge in a number of other women's organizations, and that's a good thing," says Jennifer Lawless, director of American University's Women & Politics Institute. "The power of one decreases as others enter the scene."

Make no mistake: EMILY'S List remains the dominant force. It has earned a place on the "Heavy Hitters" list compiled by campaign spending tracker Center for Responsive Politics. It ranks ahead of Microsoft Corp. and JPMorgan Chase & Co., and just behind the American Bankers Association.

Its investment has paid off in the election of women like Sen. Amy Klobuchar of Minnesota, who has gotten nearly $360,000 from the list over the past five years -- three times the amount of her second-biggest donor, a Minneapolis-based law firm.

'Everything Has Stayed The Same'?

But despite all the money EMILY'S List and others have poured into women's races, and some high-profile electoral success, the number of women in federal elective office has hit a plateau. (And when it comes to Republican women, their numbers have actually dropped.)

And in the past five or so years, the U.S. has plummeted from ranking 57th worldwide in the number of women in its national legislature to trailing 84 other countries, says Lawless, who, with fellow political scientist Richard Fox, tracked the numbers in their 2005 book, It Takes a Candidate: Why Women Don't Run for Office.

An updated version of the book, out in July, will show, she says, "that basically, everything has stayed the same."

Supporters of EMILY'S List acknowledge that there is work to be done to fill the pipeline with women in elective office at local levels, and they have a wide-reaching training program.

But just as pressing, perhaps, is the need for the organization to expand its issue base beyond abortion.

"The next generation of women has grown up with Roe v. Wade as the law of the land," says Ann Liston, a Chicago-based Democratic consultant who was a regional director for EMILY'S List and still does contract work for the organization.

"As an organizing issue," she says, "choice might not be as powerful in this next generation."

Indeed, while maintaining a woman's right to legal abortion remains paramount to EMILY's List -- particularly in light of its prominence in the recent health care debate -- the organization has begun to broaden its conversation about issues to include the role of women in the workplace and their access to health care.

"We are going to have to find issues that galvanize the new-generation donor and voting population," Liston says. "I think issues of fairness and equal pay and women's rights and electing women to office are still very important to this next generation and will resonate."

At Thursday’s lunch celebration, Schriock, who also worked as finance director for Democrat Howard Dean’s 2004 presidential campaign, said that EMILY’S List will be "growing online and reaching out to a new generation of supporters."

Malcolm told the crowd that the new president speaks in the voice of her generation.

Says Lawless: "It's nice to bring a fresh face to something that's not a sinking ship. All she can do is improve it."

After 25 years, EMILY'S List is continuing to transform -- still the "first stop for Democratic women on the road to public office," Pelosi says.

And, says Liston, it didn't acquire its name for nothing.

"They don't call it EMILY, they call it EMILY'S List," she said. "They know that their list is the most powerful tool that they have -- and it will continue to be a very influential list in American politics."