Accessibility links
Genome Seen As Medical Crystal Ball Stanford scientist Steve Quake was only the fifth person in the world to have his entire genome spelled out. Now he claims to be the first to use it to find out just what diseases he's at risk for and what he should do about it. What Quake and his doctor learned provides a glimpse into the future of genomic medicine — and its challenges. 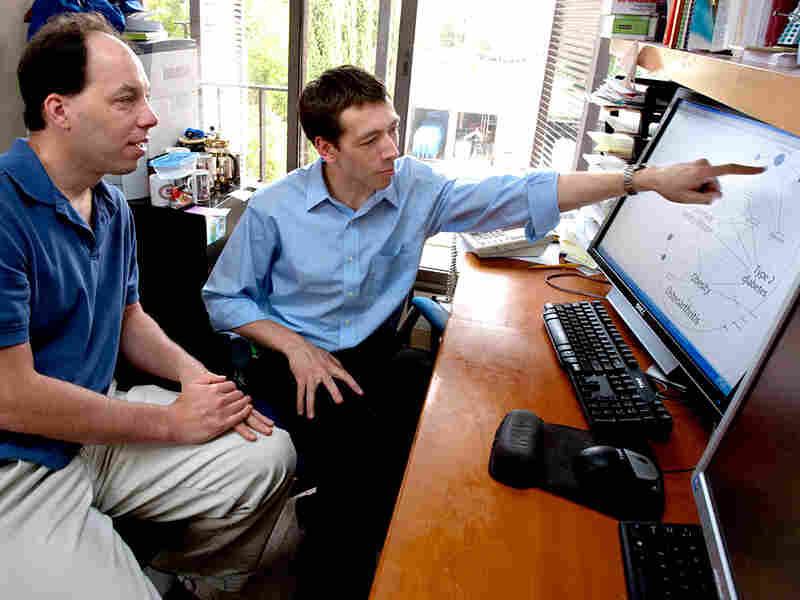 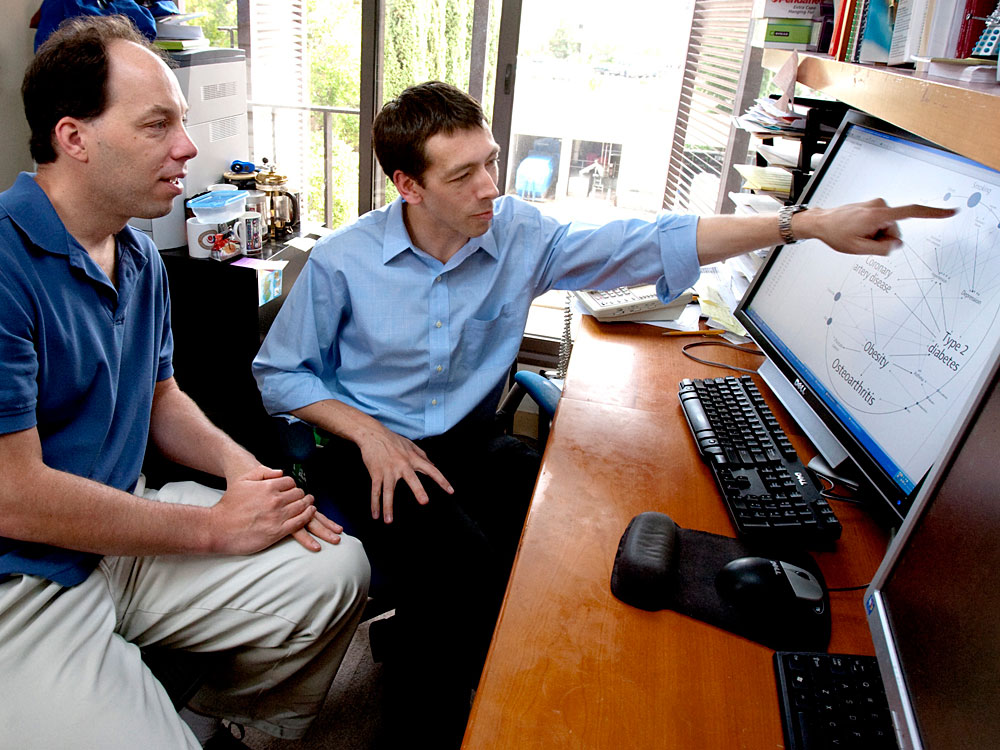 Stanford scientist Steve Quake was only the fifth person in the world to have his entire genetic code -– his genome -- spelled out last summer. Now he claims to be the first to use it to find out just what diseases he's at risk for, and what he should do about it.

It's been an instructive exercise. He and his colleagues say it holds many lessons for how to handle the flood of genomic information that's on the horizon.

"I think the information can help people live better, but it won't do it all by itself," says Hank Greely, a Stanford ethicist involved with the project. "Just dumping data on people will not lead to better results."

Figuring out the medically useful messages in Quake's genome involved several dozen specialists. The project and its implications are laid out in two articles published by the scientific journal Lancet.

Quake says it began with an e-mail he got from George Church, a Harvard researcher, after Quake's genetic sequence appeared in Nature Biotechnology last August.

Church was writing software that aimed to pull together everything known about which genetic mutations are linked to what diseases.

"He offered to run it on my genome," Quake says. When he started combing through the results, the Stanford bioengineer says, "Rare mutations related to heart disease started cropping up. That's when I called [Dr.] Euan" Ashley, a Stanford cardiologist with an interest in the genetics of heart disease.

As it happened, Ashley's group had been thinking about what they would do if a patient walked in with a report detailing his entire genome.

"It's going to happen sooner or later," Ashley says, "and we felt that somebody should take a crack at it, and it probably should be us."

Ashely says he was struck right away when he learned that Quake had a first cousin once removed who had died mysteriously at age 19.

"We were interested in looking at his genome to see if there were any clues," Ashley says. "We did find mutations in genes that are associated with conditions that can cause sudden death."

Quake has staked his career on making just this kind of information easy to get. But he says knowing his family history was an entirely different thing from being told that he has a mutation associated with a potentially fatal disease.

"You know, the chance of dying is 100 percent, it's just a question of how and when, right?" Quake says. "I think this sort of points to an interesting thing about personal genomes. You have to have a bit of a strong stomach for it."

That's because much of the news you get is bad. For instance, there's not a lot you can do about mutations linked to sudden cardiac death –- except get checked out from time to time so doctors can look for any ominous changes in your heart.

A thorough physical exam on Quake, who is 40 and athletic, turned up no heart problems. He says he'll get those periodic echocardiograms, ultrasonograms and stress tests. 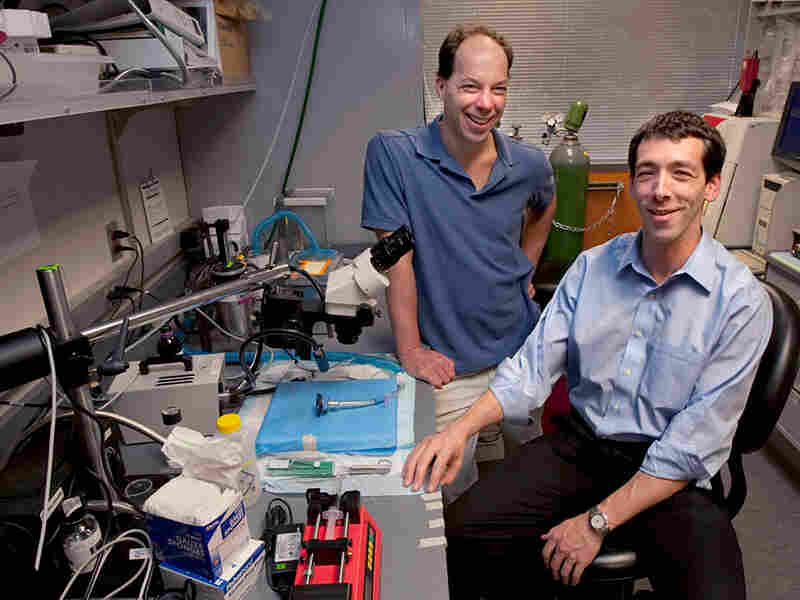 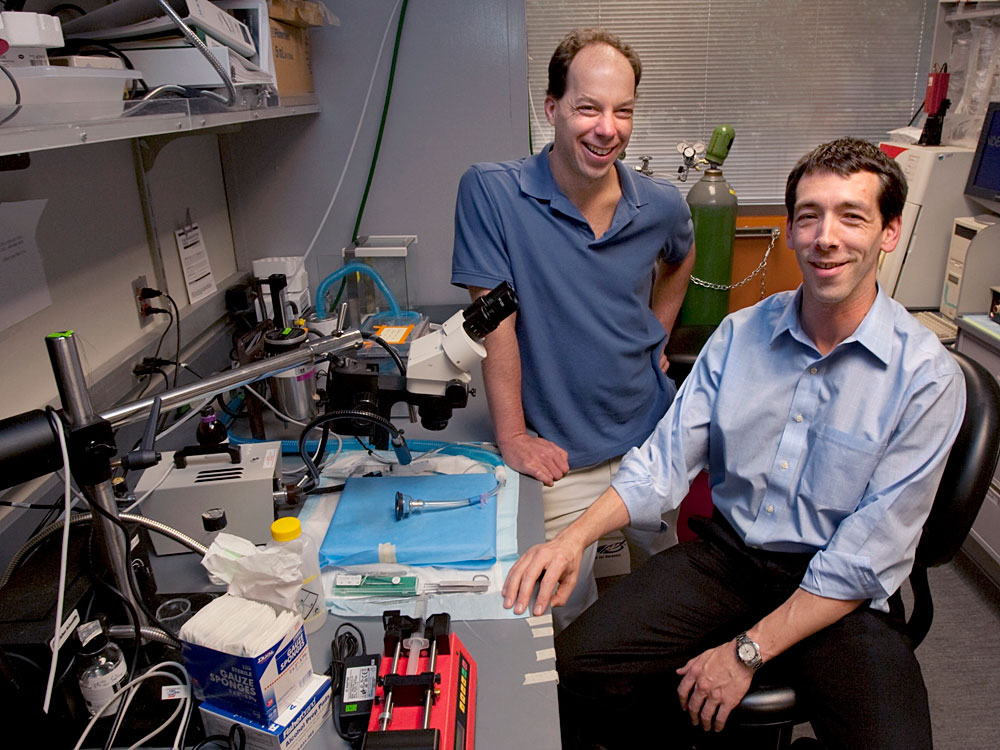 Stephen Quake (left) and Euan Ashley in the lab together.

Sometimes, however, genes yield up information you can do something about. For example, Quake turns out to have a higher genetic risk of getting coronary artery disease. But he also has a gene that means he'd be especially responsive to cholesterol-lowering drugs called statins.

"He has variants to suggest he would likely have benefit from this medication and that he would be less likely than other patients to have adverse effects from the medication," Ashley says. So Ashley has urged Quake to start taking a statin, even though conventional guidelines don't put him in that category.

But giving Quake this genetic information doesn't mean he'll act on it.

"In point of fact, I have not yet started on the statins," Quake says with a laugh that's somewhere between sheepish and defiant. "I'm still thinking about it."

Another case-in-point: Quake carries a mutation that gives him extra protection against a heart attack if he takes a baby aspirin every day. Ashley has urged him to do that, but Quake hasn't gotten around to it yet.

The most useful messages in Quake's genome, he says, come from a collection of 69 gene variants related to how different drugs are metabolized.

For instance, that shows Quake would not respond well to clopidogrel, an anti-clotting agent that is often prescribed for patients with coronary artery stents, to prevent them from clogging up. So now his doctors know that if he ever needs a stent, they'd need to use higher doses of clopidogrel or they could try other drugs.

The list of drug-related gene variants "is incredibly useful," Quake says. "The next time I'm in a situation where a doctor prescribes a drug, I now have the inside track to understand how well that drug's going to work with me and whether there's going to be side effects or not."

But ethicist Greely says Quake's experience raises many difficult issues about the future of this new personalized medicine. That's largely because so little is known about the meaning of the genetic variations lurking in Quake's -– or any patient's -– genome.

But it also involves issues of who's going to interpret what is known. "North America has only about 2,500 genetic counselors and 1,100 clinical geneticists," Greely notes. "We were floored as we began to think seriously about how complicated it's going to be."

Everybody carries dozens of gene variants linked to diseases to one degree or another.

"There are 100 or 120 different genetic risks that one would like to talk about with Steve -- or with any patient," Greely says. "We started multiplying that by two or three minutes per risk and ended up looking at five hours of genetic counseling. What's going to do that? Who's going to listen to it? Who's going to understand it? And who's going to pay for it?"

Greely says he hopes there will be at least five years to work out some of these issues. But Quake says genome sequencing is going to be widely available sooner than that. Last summer, it cost about $48,000 to sequence his genome -– down from $300 million for the very first human genome sequence in 2003. Right now, he says the cost is down to $24,000.

And within three years, Quake predicts, getting your entire genome sequenced will cost about as much as an ordinary MRI.