Accessibility links
Massey Offers $3M Each To Dead Miners' Families The cash payouts would be in addition to death benefits that include health insurance, college tuition, life insurance and continued weekly paychecks. The owner of the Upper Big Branch mine in West Virginia, where 29 people were killed in an explosion April 5, declined to confirm the details of the settlement offers. 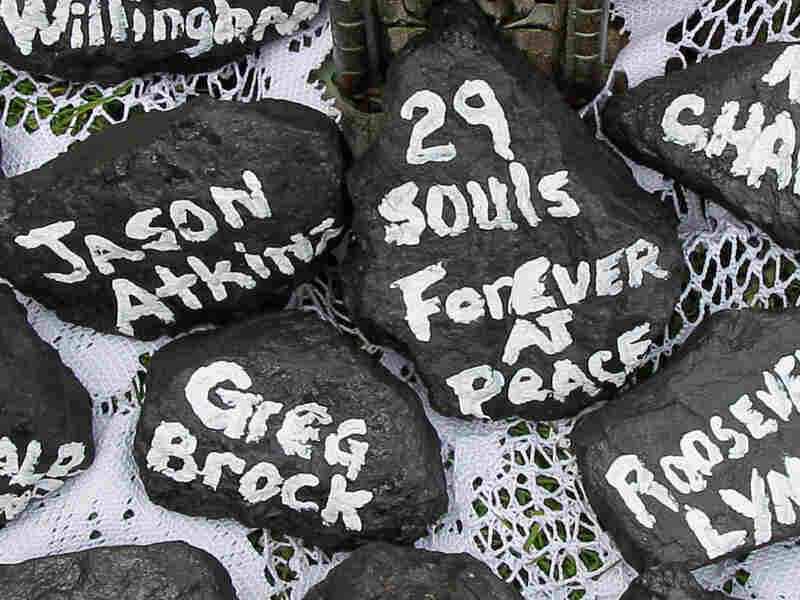 Chunks of coal bear the names of the miners who died in the April 5 explosion at the Upper Big Branch coal mine in Montcoal, W.Va. Amy Sancetta/AP hide caption 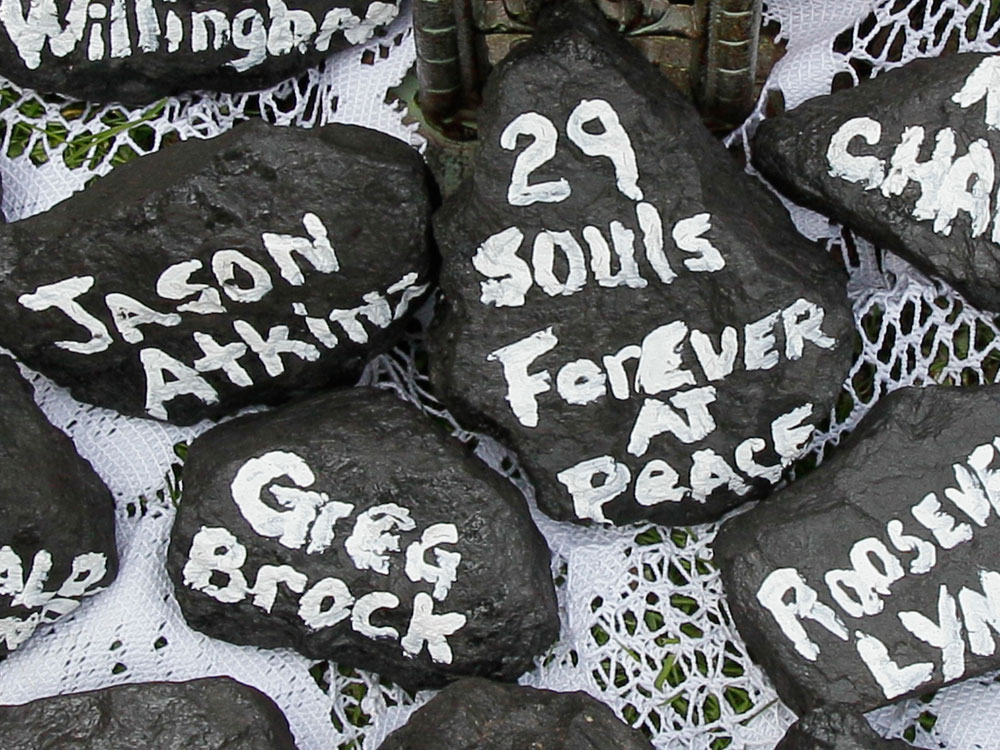 Chunks of coal bear the names of the miners who died in the April 5 explosion at the Upper Big Branch coal mine in Montcoal, W.Va.

The owner of the Upper Big Branch coal mine in West Virginia, where 29 miners died in a massive explosion April 5, is offering cash settlements to the families of the victims.

Three people familiar with the offers say they involve $3 million in cash payments to each family.

Some of the families have filed wrongful death suits or have indicated they intend to sue. At least two of those families were not offered settlements.

Massey Energy declined to confirm details of the settlement offers.

"There have been private conversations with families, yes," Karen Hanretty, an acting spokeswoman for the company, said. She added that Massey was "not going to make public comments about those confidential conversations."

The family of Benny Ray Willingham of Corinne, W.Va., was among those approached by Massey officials last week. Willingham was 61 when he died in the blast and had worked in coal mines for more than 30 years.

"We don't want the money," his daughter, Michelle McKinney, said. "We would like to have our daddy back alive."

McKinney said she, her mother and her two brothers met with Massey officials April 21. She wouldn't disclose the amount of the settlement offer but said the family was not given a deadline for a response and was not asked to keep the offer confidential.

"Once we agree," McKinney said, "the case is closed. We can't sue."

The families will also receive death benefits not connected with any settlement and in addition to a cash payout. The death benefits include health insurance coverage, life insurance (five times the annual salary of the mineworker), college tuition and ongoing weekly paychecks (until widows remarry).

"Some of the miners hadn't been in the ground four or five days," McKinney said, referring to the timing of the offer.

"This is a particularly difficult time for these families to be called upon by Massey Energy to make decisions that would affect them, their children and their grandchildren for generations," said Mark Moreland, an attorney who filed the first wrongful death suit stemming from the disaster.

Settlements would help Massey keep its cash payouts in line with its liability insurance for claims resulting from the disaster. They would also help Massey avoid lawsuits that could result in punitive damage awards for reckless conduct. And those awards can be "exponential," according to Moreland.

McKinney said she believes Massey is trying to keep families from complaining about the company's litany of safety citations and fines.

"They're trying to make us happy," she added. "But we'll never be happy again. We'll never be the same family again."