Accessibility links
Arizona Immigration Law Generates First Challenges The first legal suits have been filed against Arizona's tough new immigration law. Latino and other groups say the measure is unconstitutional, and law enforcement officials are taking sides. A Phoenix-area sheriff supports the law, while his counterpart in Tucson's Pima County, near the Mexican border, says enforcing it will drain local resources. 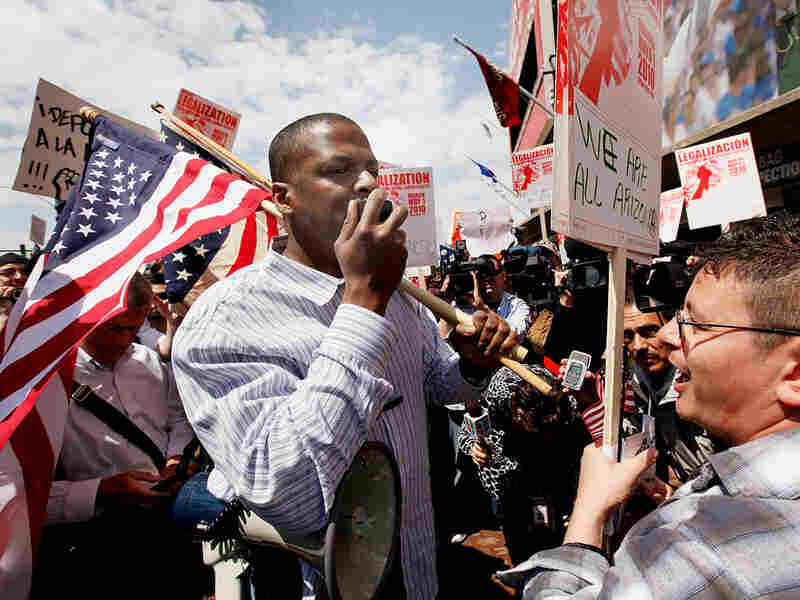 A counter-demonstrator squares off with immigrant rights supporters during a protest outside Wrigley Field before the start of the Cubs game against the Arizona Diamondbacks Thursday in Chicago. Dozens of people demonstrated outside the park calling for a boycott of the series to protest the passage of Arizona's controversial immigration law. Scott Olson/Getty Images hide caption 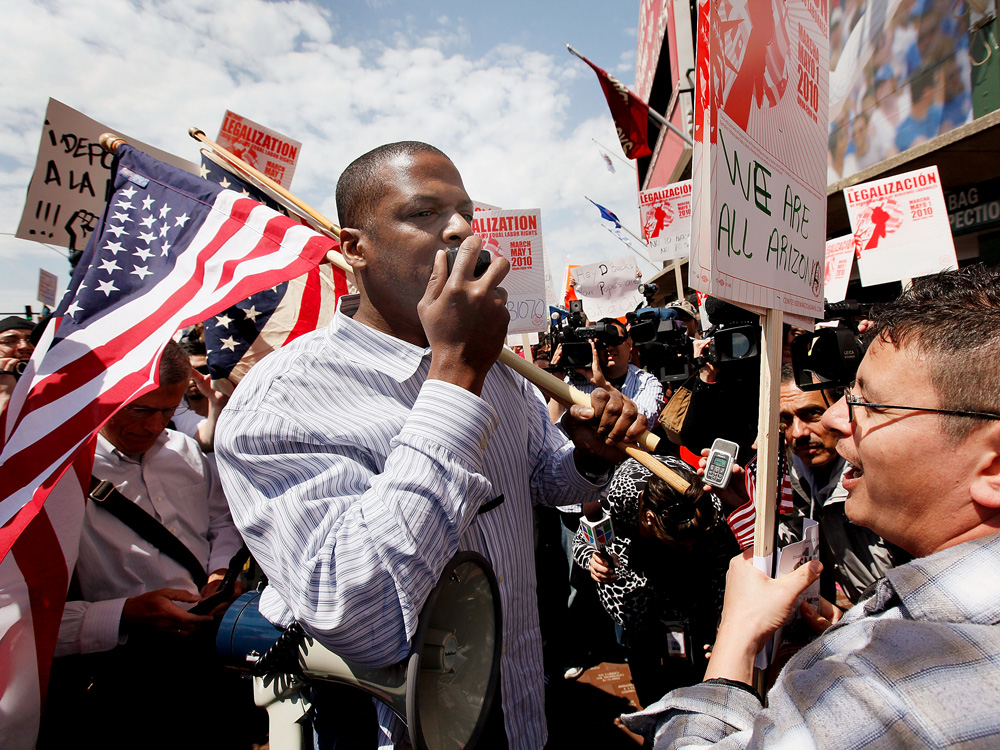 A counter-demonstrator squares off with immigrant rights supporters during a protest outside Wrigley Field before the start of the Cubs game against the Arizona Diamondbacks Thursday in Chicago. Dozens of people demonstrated outside the park calling for a boycott of the series to protest the passage of Arizona's controversial immigration law.

Arizona's new immigration law is just a week old, but it's already generating plenty of controversy, spurring boycotts, lawsuits and action in Congress. Even the state's law enforcement officials are taking sides for and against the measure, which orders legal immigrants to carry their papers at all times.

While Democrats in the U.S. Senate unveiled a proposal to revamp federal immigration legislation Thursday, three lawsuits in Arizona -- one by the National Coalition of Latino Clergy and Christian leaders, and one each by police officers in Tucson and Phoenix -- were filed to block the state's legislation from taking effect.

On the lawn in front of Arizona's capitol, leaders of three powerful civil rights groups also announced their intention to keep the law from taking effect -- the ACLU, the National Immigration Law Center and MALDEF, the Mexican American Legal Defense and Education Fund. MALDEF's president, Thomas Saenz, said the Arizona law is an unconstitutional attempt to control immigration

"That is a responsibility and authority that belongs exclusively to the federal government," Saenz said. "Indeed, if it were not the case that we had only one federal government regulating immigration, we would cease to be one nation."

Saenz said the law also illegally requires police to use race, language or accent as a basis to question people.

It's not the first time this coalition of groups has sued to block a state immigration law. In the 1990s, it successfully stopped California's Proposition 187, which tried to cut off education and social services to undocumented immigrants. That law was supported by almost 60 percent of California voters.

Republican state Rep. John Kavanaugh, one of the bill's sponsors, said, "So it's not just Arizona. It's [that] everybody's upset. And this country's not laughing at us -- they're cheering us on."

Kavanaugh scoffed at threats to boycott Arizona tourism or products. He said in the long run, visitors will come back.

"As the illegal immigrant population is reduced, Arizona will become a safer place, and tourists like safe places," he said.

Yet even some law enforcement officials in Arizona are bluntly expressing their opposition.

In southern Arizona, along the border, Pima County Sheriff Clarence Dupnik said it's "bull." His department regularly arrests illegal crossers who've committed serious crimes, then turns them over to the Border Patrol. Dupnik says the state law duplicates federal law, and if it takes effect, it will drain local resources.

"We would not only put the jail into a crisis overnight," he said. "We would overwhelm the rest of the system, and the taxpayers would have to pay for that. Right now, we give them to the feds, and it doesn't cost the local taxpayers anything."

"I look at it a little different," he said. "I say I'm helping the federal government. They can't take care of this problem themselves."

He says he has plenty of room for illegal immigrants in his famous -- or infamous -- tent city jails. So he's looking forward to making them serve local time before he turns them over to the feds.

"Because now it's a state law, [it's] a misdemeanor to be in this country illegally, so that's just the extra tool we will have if we choose to enforce it. I am going to enforce it," Arpaio said.

Still, in response to concerns, Arizona's House of Representatives approved changes in the law late Thursday, months before it's scheduled to take effect. One change says race cannot be used as the sole reason to demand proof of legal residence or citizenship. Another says the law can only be used if police make a stop or arrest.

But a final change makes the law stiffer. It requires police officers to question immigration status when they're called for even minor local offenses like loud parties.

The audio version of this story says, as did a previous Web version, that the law requires legal residents to carry papers at all times. That is actually a long-standing provision of federal law. The new Arizona law allows local law enforcement to demand proof of immigration status.