Accessibility links
In Raul Castro's Cuba, A Limit On New Freedoms Cuba has done more to let its citizens vent their frustrations. But for those who go too far or organize against the government, the response is swift and sometimes ugly. 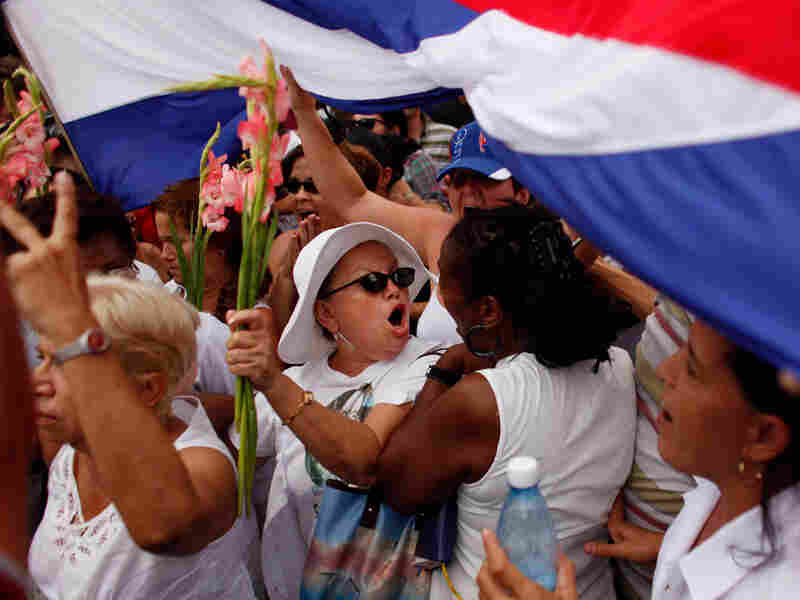 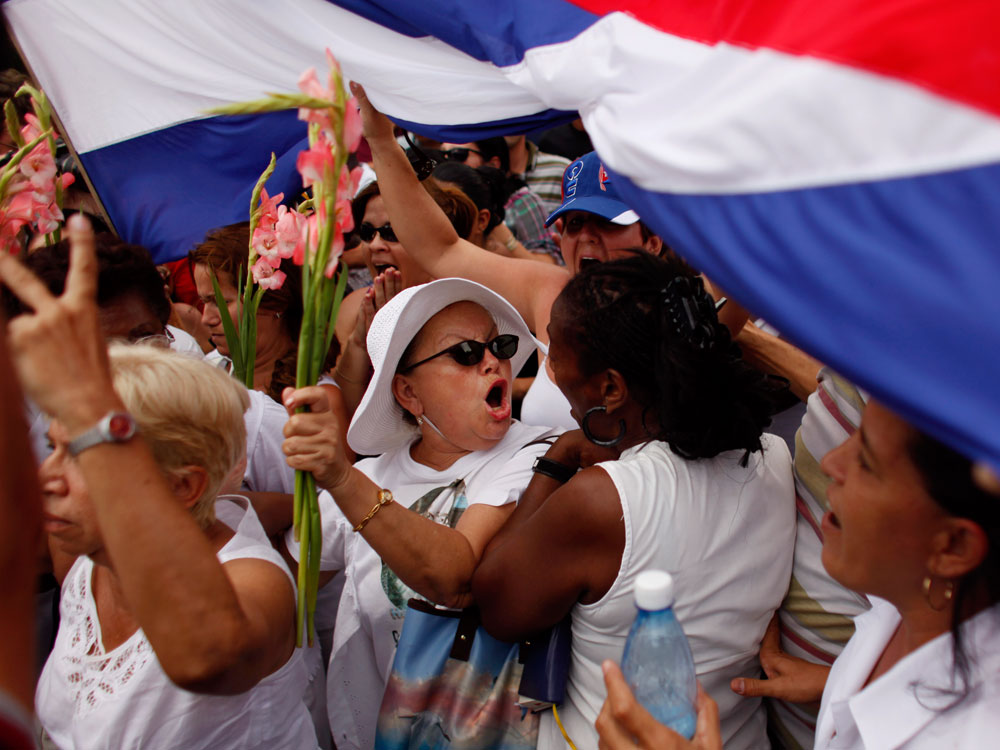 Laura Pollan (center), leader of the Cuban dissident group Ladies in White, is surrounded by government supporters after Sunday Mass in Havana on April 25.

Since President Raul Castro took over the country's leadership, there has been a greater openness to public criticism -- within limits -- in the one-party system. But for those who go too far or organize against the government, the response is swift and sometimes ugly.

Last Sunday, six older women dressed in white walked out of their Havana church after Mass and attempted to march, carrying pink flowers. They're part of a larger group that has been doing this every week since 2003, when their loved ones were jailed in a political crackdown.

In Cuba, it is the closest thing to a public protest against the government. But this month, things changed.

A plainclothes government agent ordered the women to stop their march, and when they argued, he walked away. Then a crowd of government supporters charged in. 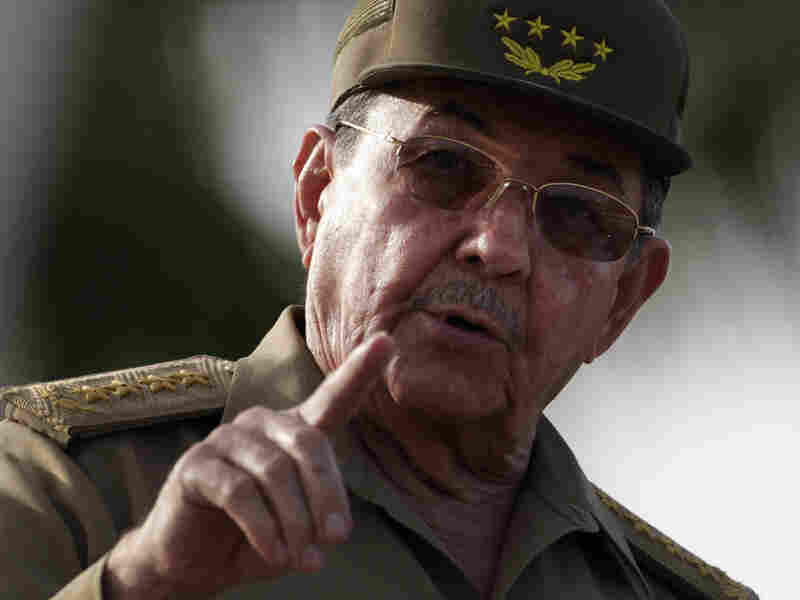 Under Raul Castro, Cubans have more opportunities to vent. But the government has not tolerated open protests against the government. Javier Galeano/AP hide caption 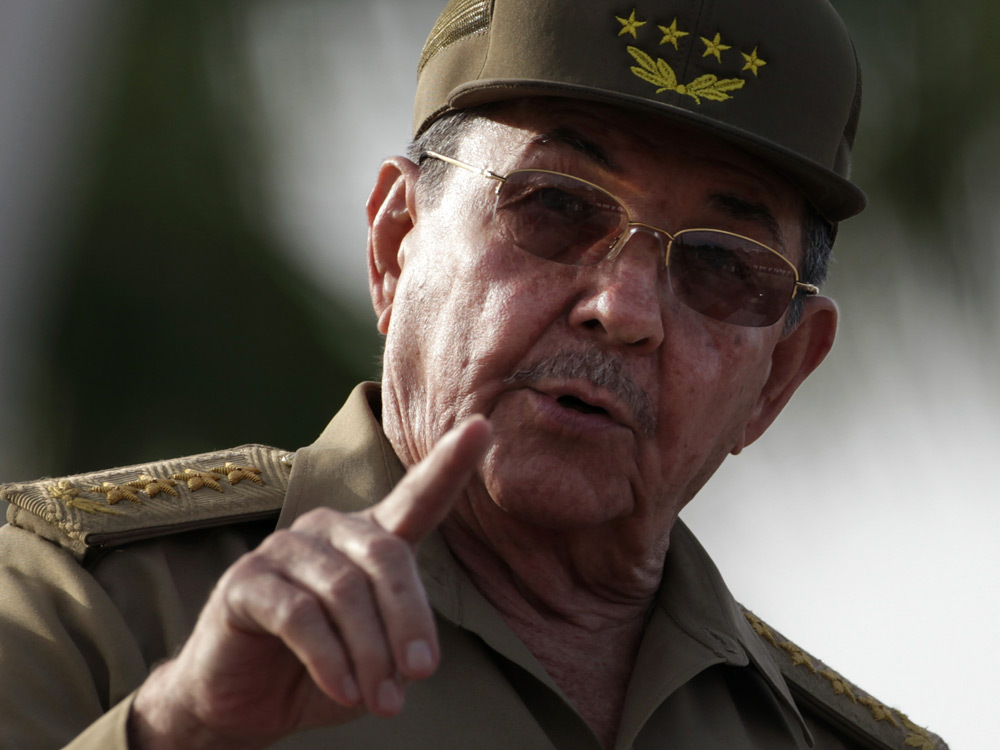 The crowd pushed the women into a nearby park and circled them to prevent their escape, chanting "Fidel, Fidel." Plainclothes government agents with earpieces and aviator sunglasses stood nearby, directing the crowd and intervening when things got too rough.

A few passing Cubans stopped to watch, but they neither joined in nor interfered.

Cuba has done more under Raul Castro to let its citizens vent frustrations. Raul took over Cuba's leadership in 2006 because of the illness of his brother, Fidel Castro, and officially took over as president in 2008.

Letters to the editor and essays in the state media now openly denounce corruption or call for market-style reforms. Prominent artists and scholars are publicly urging changes. Last weekend, a popular hip-hop group with harshly critical lyrics was granted unusual permission to perform at an official venue.

But some Cubans say the signs of openness are misleading.

"There's no space for people who really think differently," said a Cuban bystander in a city park who said his name is Eduardo. "The changes are merely cosmetic," he said. "They're for people who already think the same."

There no longer appears to be a place for the Ladies in White, who are the wives and mothers of jailed government opponents. Last month, they staged a week of daily marches, drawing international support for their cause.

But for the past three Sundays in a row, the government has blocked them, sending a stern message with counter-demonstrators, like Aracely Keeling, who carry out what are called acts of repudiation against the women.

"I'm here because I'm a Cuban citizen, and these women are trying to incite the rest of the country," Keeling said. "They're paid by the United States to form part of a media campaign against the Cuban people."

The Cuban government has released documents that it says show the Ladies in White have received financial help and support from U.S. officials and anti-Castro militants in Florida.

The Ladies in White get no sympathy from Maria Elena Martinez, who was red-faced and hoarse from shouting at them.

"These people are criminals; they're the scum of this country," Martinez said. "They're only here because they know they can get the attention of the foreign media. They're just using you to create this whole circus."

On that Sunday, the counter-demonstrators chanted "Cuba Si, Yanqui No!" as the harassment against the Ladies in White went on for seven hours.

The women didn't go to the bathroom, and they did not sit down. They just stood, staring straight ahead. And while their numbers have been dwindling each week, they say they are going to try to march again Sunday.