Accessibility links
Foreclosure Woes Loom As Housing Stimulus Ends The end of an $8,000 federal tax credit for homebuyers will remove a critical means of life support. Housing experts say home prices could continue to fall another 5 percent nationwide. Meanwhile, a record number of homes are headed toward foreclosure. 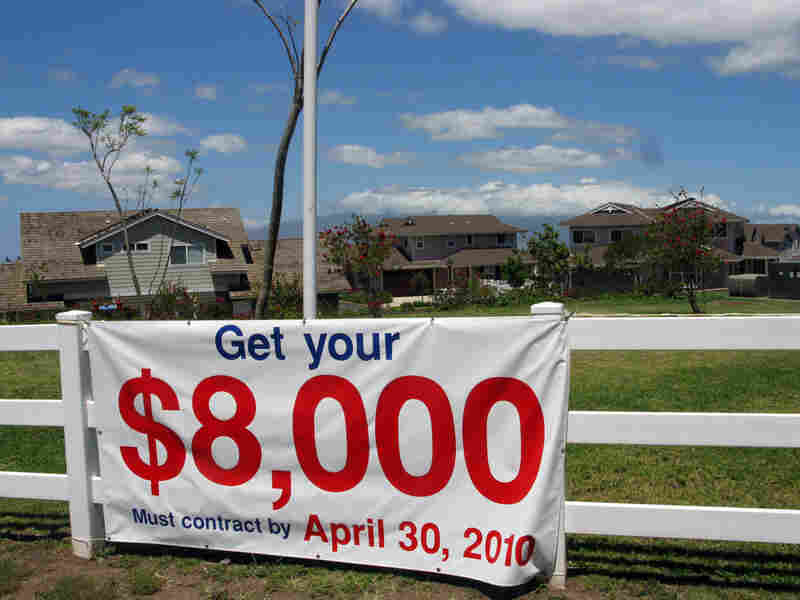 A sign in Maui, Hawaii, urges people to buy before the $8,000 tax credit expires. Brokers in the area say prices have fallen sharply and sales have been picking up. Chris Arnold/NPR hide caption 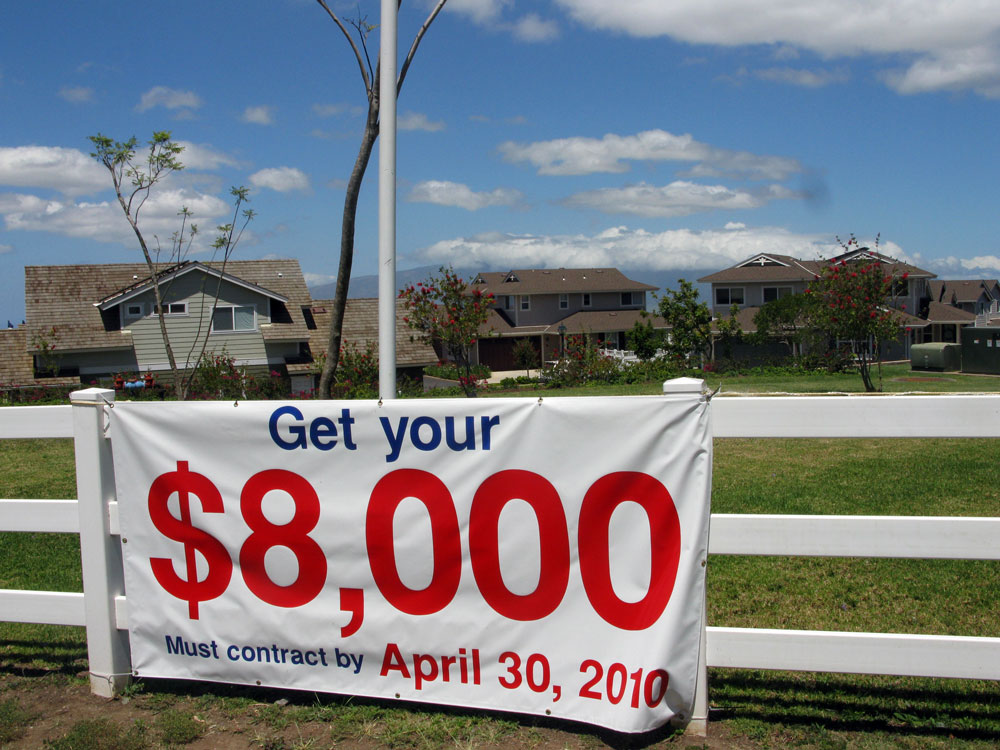 A sign in Maui, Hawaii, urges people to buy before the $8,000 tax credit expires. Brokers in the area say prices have fallen sharply and sales have been picking up.

The Homebuyer Tax Credit Ends Today. So What?

Friday marks the last day that homebuyers can qualify for an $8,000 federal tax credit. The government has been trying to rescue the housing market from collapse. But now it's taking away most of that life support.

The Federal Reserve a few weeks ago stopped another program that was helping to keep mortgage rates low through the purchase of mortgage securities. So the housing market is now going to have to try to stand on its own two feet.

But some analysts say millions of people are still headed for foreclosure, and the added inventory of homes could glut the market and keep pushing prices down.

Earlier this week, prospective homebuyer Sheila Doherty was looking at a condo in Waltham, Mass. Doherty and her broker Anita Shishmanian say open houses have been full again, and nicer properties have been getting multiple offers as buyers scrambled to take advantage of the tax credit.

Doherty says condos "that are on the market that are nice go under agreement immediately." By the time she calls her broker to arrange a showing, it's typically too late. Shishmanian says that's a big change from just a couple of months ago.

What Next For The Housing Market?

Home sales might have been given a boost by the tax credit. But with that ending, what's going to happen now?

Shishmanian says all of the homes she listed in April have sold within two weeks. She hopes sales will hold up. And the rest of the industry -- including door and window manufacturers, construction workers and electricians, along with retail stores like Home Depot -- are also keeping close tabs on the health of the market. 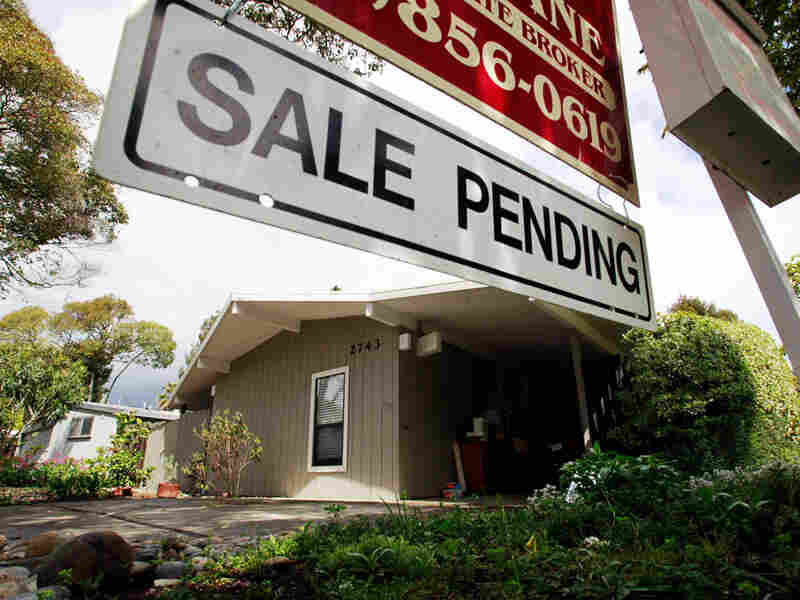 A "Sale Pending" sign is shown at a home in Palo Alto, Calif. Economists worry that the record number of people heading toward foreclosure could glut the market. Paul Sakuma/AP hide caption 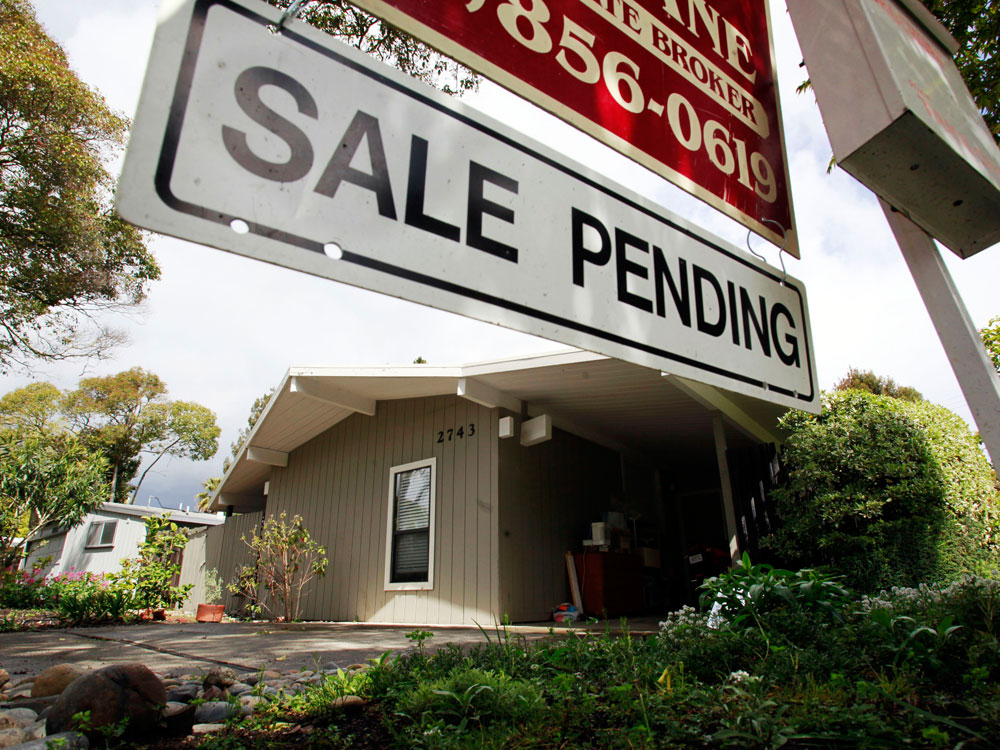 A "Sale Pending" sign is shown at a home in Palo Alto, Calif. Economists worry that the record number of people heading toward foreclosure could glut the market.

Federal data show that during the housing crash, spending on residential construction and other housing-related services saw its steepest decline in more than 50 years, falling by more than half.

Recently, the market has been stabilizing, but analysts say it's hard to know how dependent that recovery is on the federal stimulus efforts that are now ending.

"It's really only once you pull that stimulus away that the curtain is pulled back and it's revealed whether or not you're going to see a drop-off in sales activity," says Jonathan Dienhart, the director of published research with Hanley Wood Market Intelligence.

Dienhart says there might be a bit of a slump after the tax credit expires. Many economists say prices could keep sliding -- perhaps falling by another 5 percent nationally. But that's a lot less than the 30 percent price drops that have occurred in many areas.

So Dienhart says the market may continue to be depressed during 2010, but he adds, "I'm not worried that things are going to fall off a cliff later this year."

A 'Shadow Inventory' From Foreclosures

But some other experts are worried that the housing market will see a second dip. Nearly 5 million homeowners are at least 60 days delinquent and heading into foreclosure. Economists refer to that as the "shadow inventory" -- meaning homes that have yet to hit the market and go up for sale. A record number of homes heading into foreclosure could glut the market and keep pushing down prices.

Some economists say preventing many of these foreclosures could still make a big difference.

Interest rates will also play a key role. Some analysts expect them to gradually start rising this year. Lately, they've been holding steady around 5.25 percent on a 30-year fixed-rate loan with no points. Historically, that's a very low rate, and that's been good news for the housing market.