Accessibility links
Shots Still Reverberate For Survivors Of Kent State It was 40 years ago Tuesday that the Kent State University shootings -- which killed four people and wounded nine others -- stunned the nation. For many there on May 4, 1970, it was a life-changing event. But students on the Kent campus today say it had little bearing on their choice of college. 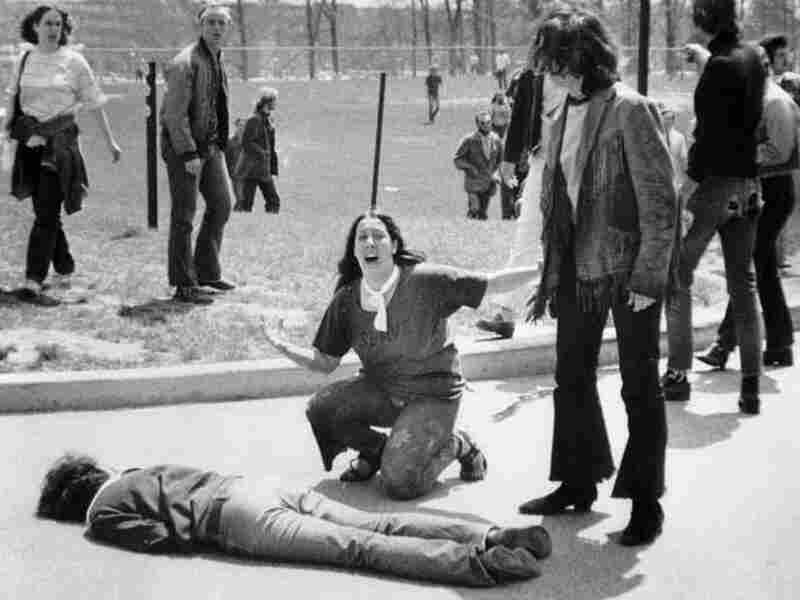 Mary Ann Vecchio screams as she kneels over the body of Jeffrey Miller after he was shot during an anti-war demonstration at Kent State University in Ohio on May 4, 1970. Four students were killed when Ohio National Guard troops fired at some 600 anti-war demonstrators. This photo, taken by John Filo, won the Pulitzer Prize. Courtesy of John Filo via WKSU hide caption

Out in the world, when people talk about the shootings at Kent State University on May 4, 1970, they call it "Kent State." But in the small town of Kent, 35 miles south of Cleveland, and on the university campus, they call it "May 4th."

It was 40 years ago Tuesday that the shootings -- which killed four people and wounded nine others -- stunned the nation. Even at the height of the Vietnam War protests, no one imagined that government soldiers would fire real bullets at unarmed college students.

"I saw the smoke come out of the weapons, and light is faster than sound, and so I knew immediately [they] were not firing blanks. So it was almost instinctive to dive for cover," remembers Jerry Lewis, who was 33 and teaching sociology at Kent State in 1970.

Often, at tense times, Lewis served as a faculty marshal. He had some Army training and was worried about bayonet attacks and butt strokes with M-1 rifles. He hadn't thought about live fire.

Lewis says that when he takes people to the scene of the shooting on the Kent Commons, he likes to point out a particular mark -- a perfectly round bullet hole in a steel sculpture.

"This is what an M-1 bullet, .30-caliber bullet, does to steel," he says. "And the artist, to his credit, has refused to fix this. So, ironically, the [National] Guard created their own memorial."

Just 10 days after the deaths at Kent State, shots rang out at a predominantly black college in the South. Two youths were killed and a dozen wounded in the shooting by police at Jackson State in Mississippi.

Shots rang out for 13 seconds that day, killing Jeffrey Glenn Miller, Allison Krause, William Knox Schroeder and Sandra Lee Scheuer. More than 60 shots came from 28 guardsmen. Some fired into the ground; some fired high on purpose.

The students had gathered for an anti-war rally, and the Guard command had wanted them to go away. Tear gas was fired, and then the canisters flung back. The youths gathered were screaming insults, giving the guardsmen the finger. Rocks were thrown.

Then a group of guardsmen moved in formation to the top of a small hill. Some of them turned in unison, aimed and fired. They could have just kept going over the hill. Most of the students were in a parking lot downhill, more than 100 yards away.

For Lewis, after 40 years, that is still the question: Why did the Guard start shooting?

'The Worst Type Of People' 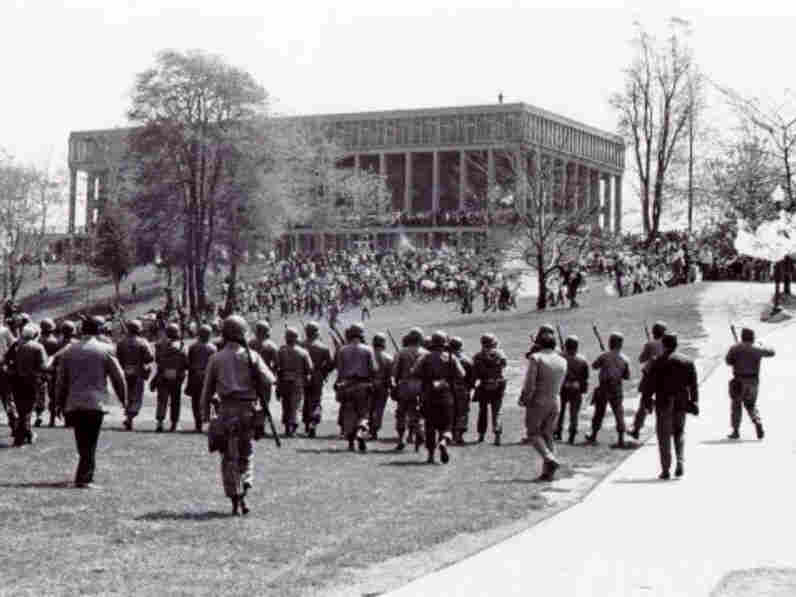 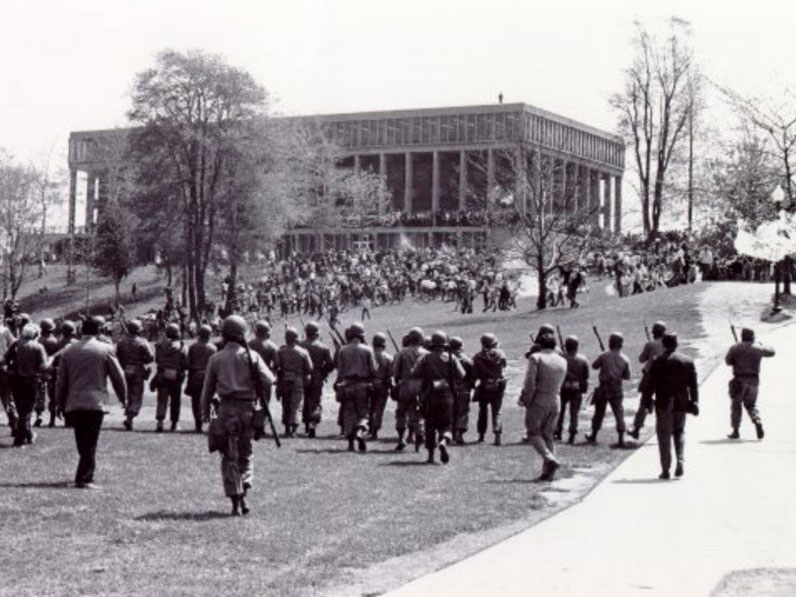 A scene from May 4, 1970, at Kent State University. It was 40 years ago Tuesday that the shootings stunned the nation.

"Obviously, if you turn together in close quarters with bayonet, there must be some coordination, but I've always interpreted as that they planned to fire but fire high -- because they were angry ... they were poorly led ... their tear gas masks didn't work properly," Lewis says. "But many people have used the turning together -- and there were lots of eyewitnesses to that -- as [a sign] that there was a rough agreement to do that, or that there was an order. But I haven't seen any evidence yet that there was an order."

The issue for the students that day became soldiers on their campus.

The noontime rally had been scheduled to protest President Nixon's plan to expand the Vietnam War into Cambodia. That news came the previous Thursday. On Friday night, there was trouble, spilling out of the downtown bars. By Saturday night, when the campus ROTC building was set on fire, the National Guard was already on the way.

Ohio's governor, James Rhodes, a Republican running a law-and-order campaign for the U.S. Senate, was in town on Sunday morning. He was critical of the radicals traveling the country causing trouble.

"They're worse than the brownshirts and the communist element and also the night riders and vigilantes," Rhodes said. "They're the worst type of people that we harbor in America. And I want to say this: They're not going to take over a campus."

"The first card that I opened up in the intensive care unit was a very nice-looking card," recalls Dean Kahler, who was paralyzed during the shooting. "But the note in it said, 'Dear communist hippie radical, I hope by the time you read this, you are dead.' "

Kahler was a freshman at Kent State in 1970. He was from a farm family and wanted to be a coach. He was against the war, but on that day, he was mostly curious -- about the Guard, about his rights.

When Kahler heard the shots, he lay on the ground. Then he was hit in the back. He has been in a wheelchair for the past 40 years.

After he graduated and became a history teacher, he would tell his high school students, "Go home and ask your parents about Kent State."

The first card that I opened up in the intensive care unit was a very nice-looking card ... but the note in it said, 'Dear communist hippie radical, I hope by the time you read this, you are dead.'

Dean Kahler, who was paralyzed during the shootings

Many of the reactions were positive and supportive. Sometimes, a youngster would tell Kahler it was a bad idea: "They told me not to talk to you about it," the students would say.

"I said, 'Well, you know, I'm teaching American history, so we're going to touch on it,' " Kahler recalls. " 'If you need to be removed from my room and go to another teacher to talk about it, go see the principal and the guidance counselor immediately.' "

As the 40th anniversary of the shootings approaches, the Kent student TV station has had stories to cover all over campus.

For Heather VacLav and Eric Snitil, two students who work at the station, the events of May 4, 1970, meant "not much" when it came to choosing a school. They were impressed with Kent State's academic reputation.

Snitil says he came for the broadcast journalism program -- "it's one of the best in the country." 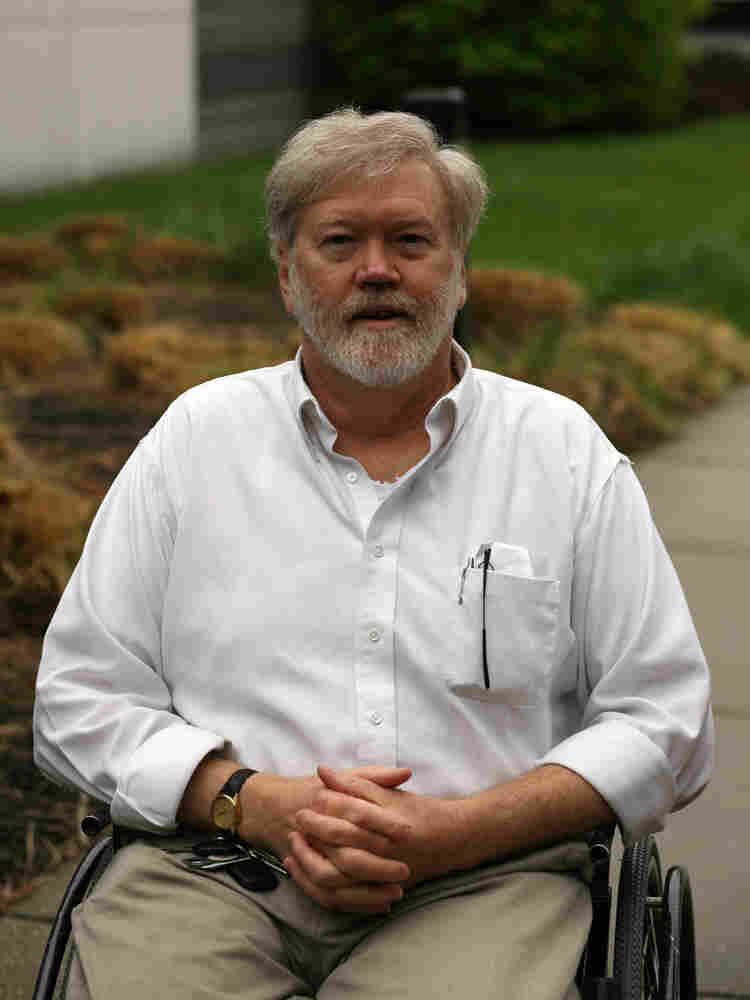 Dean Kahler, who was paralyzed during the shootings, went on to become a high school teacher and covered the events of May 4 in his classes. Noah Adams/NPR hide caption 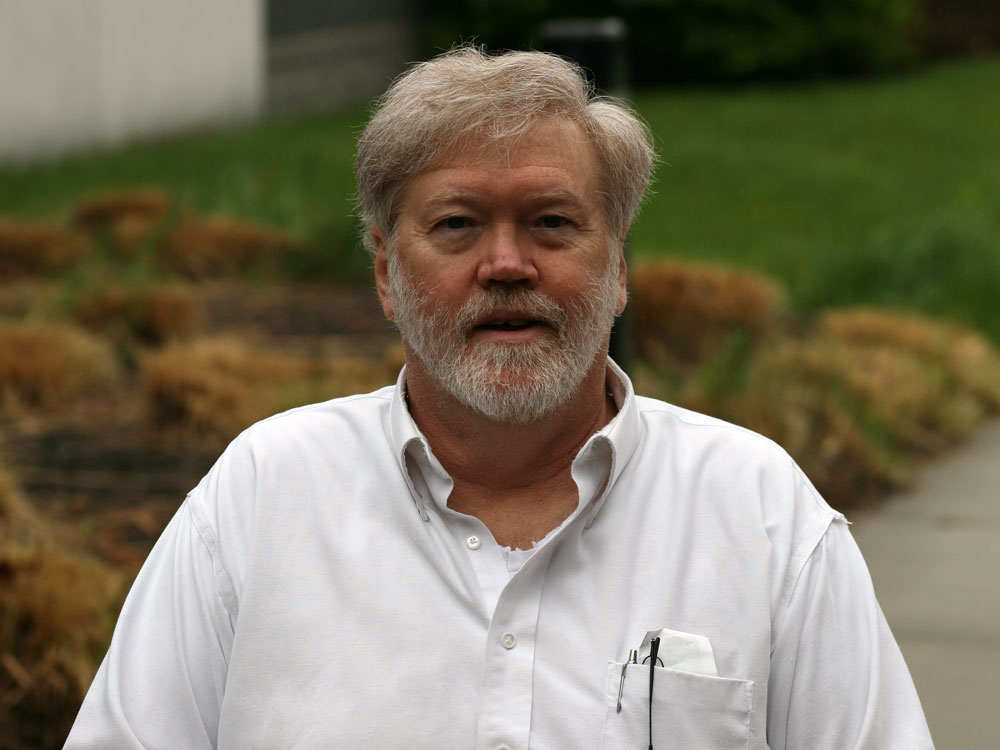 Dean Kahler, who was paralyzed during the shootings, went on to become a high school teacher and covered the events of May 4 in his classes.

And VacLav believes the university has turned around what is kind of "Kent State's claim to fame" by being open and creating a memorial.

"The original May 4 was very sad and tragic," she says. "I think now, looking back at it, the university's kind of just taken something that was negative and tried to turn it into something positive."

On Monday night, students, faculty, family and friends will honor the four who were slain and the nine who were wounded four decades ago with a candlelight march and a silent vigil. 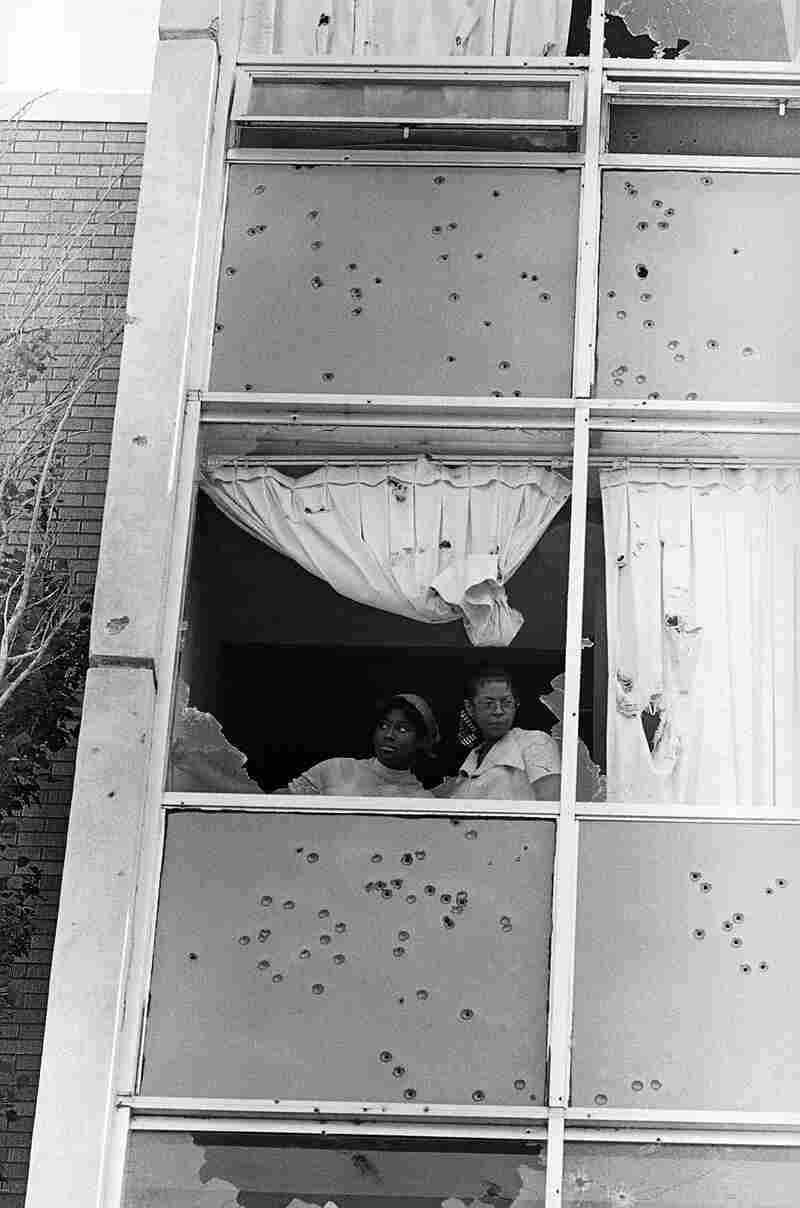 Two students at Jackson State peer from a window that was shot out by police on campus in May 1970. Jack Thornell/AP hide caption 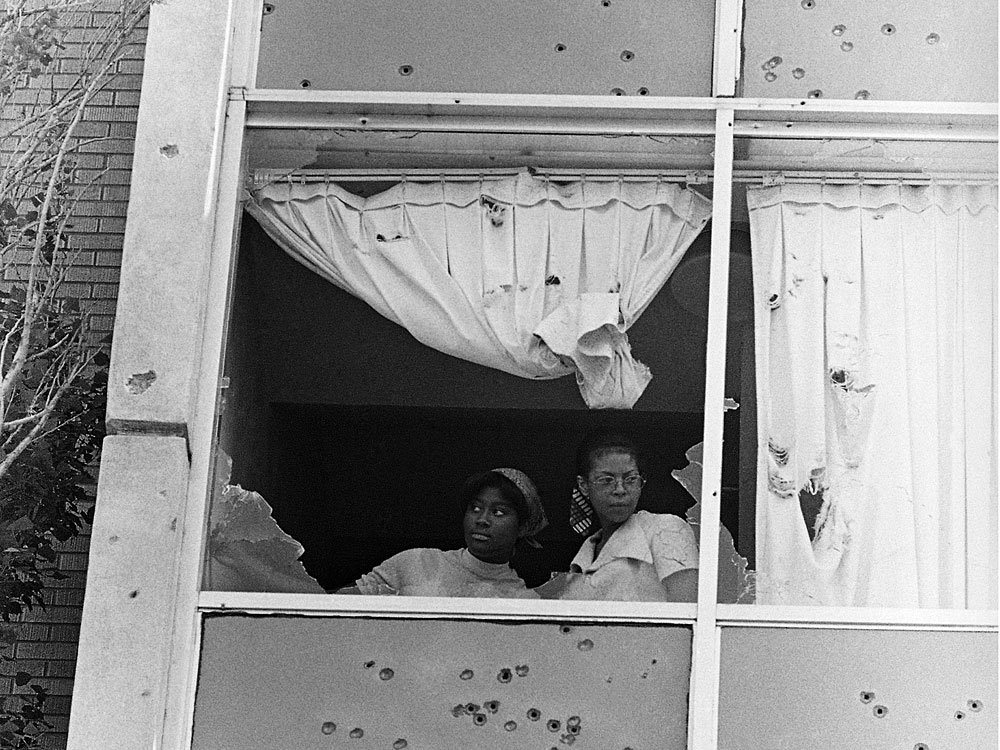 Two students at Jackson State peer from a window that was shot out by police on campus in May 1970.

A group of angry students. A burst of gunfire from authorities. Young lives cut short.

It sounds a lot like the Kent State shootings on May 4, 1970, but it happened 10 days later at a predominantly black college in the South.

Police fired for about 30 seconds on a group of students at Jackson State in Mississippi, killing two and wounding 12 others.

The tragedy was the culmination of increasing friction among students, local youths and law enforcement. On the evening of May 14, African-American youths were reportedly pelting rocks at white motorists driving down the main road through campus -- frequently the site of confrontations between white and black Jackson residents.

Tensions rose higher when a rumor spread around campus that Charles Evers -- a local politician, civil rights leader and the brother of slain activist Medgar Evers -- and his wife had been killed, according to Lynch Street: The May 1970 Slayings at Jackson State College. The situation escalated when a non-Jackson State student set a dump truck on fire.

Police responded to the call. A group of students and non-students threw rocks and bricks at the officers. Police advanced to Alexander Hall, a large dorm for women.

According to a 1970 report from the President's Commission on Campus Unrest, police fired more than 150 rounds. And an FBI investigation revealed that about 400 bullets or pieces of buckshot had been fired into Alexander Hall. The shooters claimed that there was a sniper in the dorm, but investigators found "insufficient evidence" of that claim.

The two young men who were gunned down in the melee were Phillip L. Gibbs, a junior at Jackson State and the father of an 18-month-old; and James Earl Green, a high school senior.

The event continues to leave a mark on the university. Even today, passers-by can see the bullet holes in the women's dorm. A plaza on campus commemorates the victims of the shooting.

All Jackson State students learn about the shooting in a mandatory orientation class, and professors evoke the event as a teaching tool.

C. Liegh McInnis, who teaches creative writing and world literature at Jackson State, says the story of the shooting is integrated into the curriculum of several liberal arts departments.

In McInnis' own freshman composition class, students are required to see the bullet holes in the women's dorm themselves while researching a critical analysis paper about the shooting.

On Thursday, Jackson State held a 40th anniversary memorial to pay tribute to the victims of the shooting. The event brought back 24 alumni who attended Jackson State in 1970, some of whom had been injured that night.

"The tragedy showed the resolve of the students," McInnis said.

McInnis said all of the alumni -- who had traveled from places like Houston and Detroit -- ended up being leaders in their fields and their communities.

"What the shooting did is that it showed, even through this heinous act, black intellect could not be stopped," McInnis said.