Accessibility links
Meet The New Guy On Air Force One President Obama took a two-day swing through the rural Midwest this week. In many ways, it was a typical domestic trip, but for NPR's Ari Shapiro, everything was new.

President Obama took a two-day swing through the rural Midwest this week. In many ways, it was a typical domestic trip, but for NPR's Ari Shapiro, everything was new. He has just joined NPR's White House team, and he sent us this Reporter's Notebook about his first trip with the president. 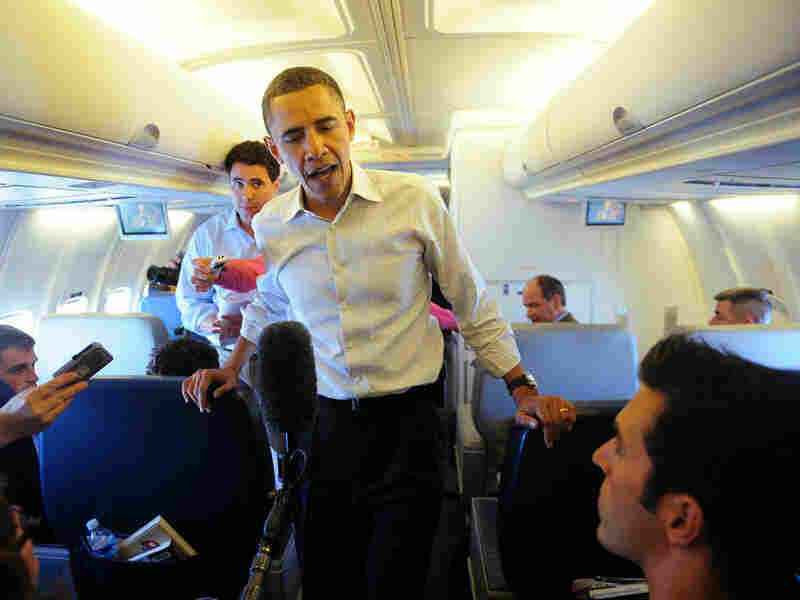 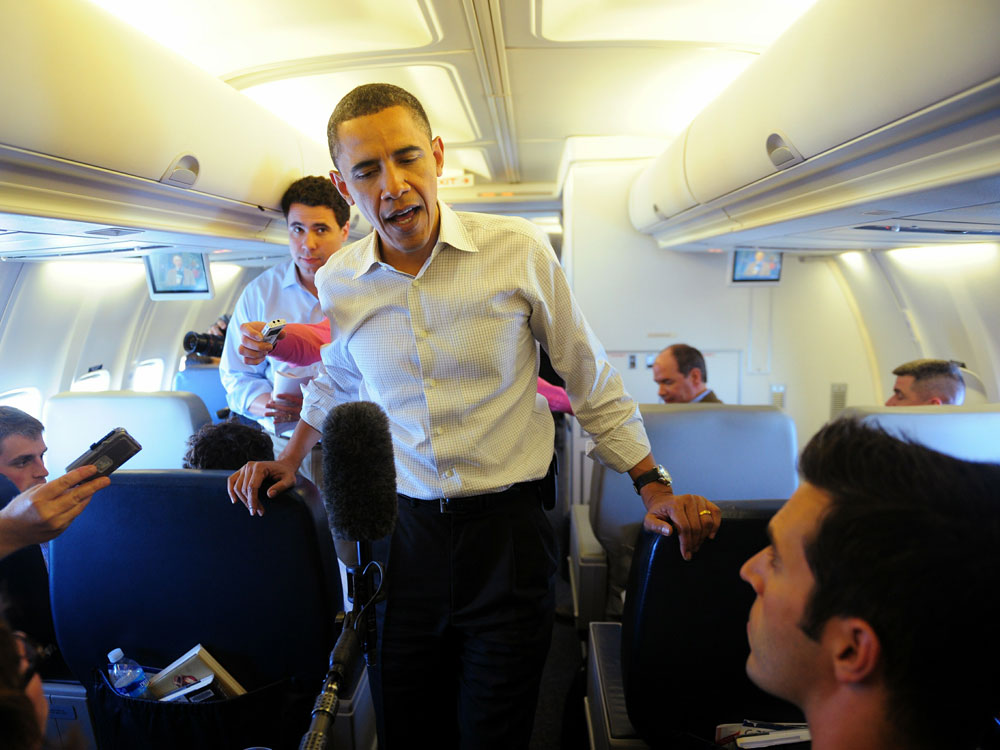 NPR's Ari Shapiro (lower right) got the last question when President Obama spoke with reporters on Air Force One on Wednesday.

A cardinal sin of journalism is what's known as "burying the lede" -- putting the biggest news late in the story. So let me begin with the end of the trip.

Flying home to Washington, President Obama walked to the back of Air Force One and took reporters' questions. He has not done that in months. Just when it looked like he was done, he glanced at me and said, "I'll give him the last question, since this is his first ride on the plane." I asked about the Supreme Court and conservative judicial activism.

My first question to the president capped a trip full of firsts. The journey felt like a campaign swing. Obama toured a factory, kissed babies, rallied crowds and visited a family restaurant in Mount Pleasant, Iowa, for a slice of rhubarb pie.

When the white-haired waitress at the restaurant offered to brew him a fresh pot of coffee, the president declined. "You can give me the old, gnarly piece of coffee," he told her.

Traveling with the president is known as being in the "bubble." To me, it felt more like dominoes. People spend weeks meticulously placing each domino in the right spot. Once the first domino falls, the president, his staff and the media zoom from the airplane to the helicopters to motorcade to the rally to the town hall meeting.

In Quincy, Ill., we ran into a hall where a few thousand people were waiting. We plugged in our laptops, and a disembodied voice announced "The president of the United States!" The event began to the familiar tune of "Hail to the Chief." 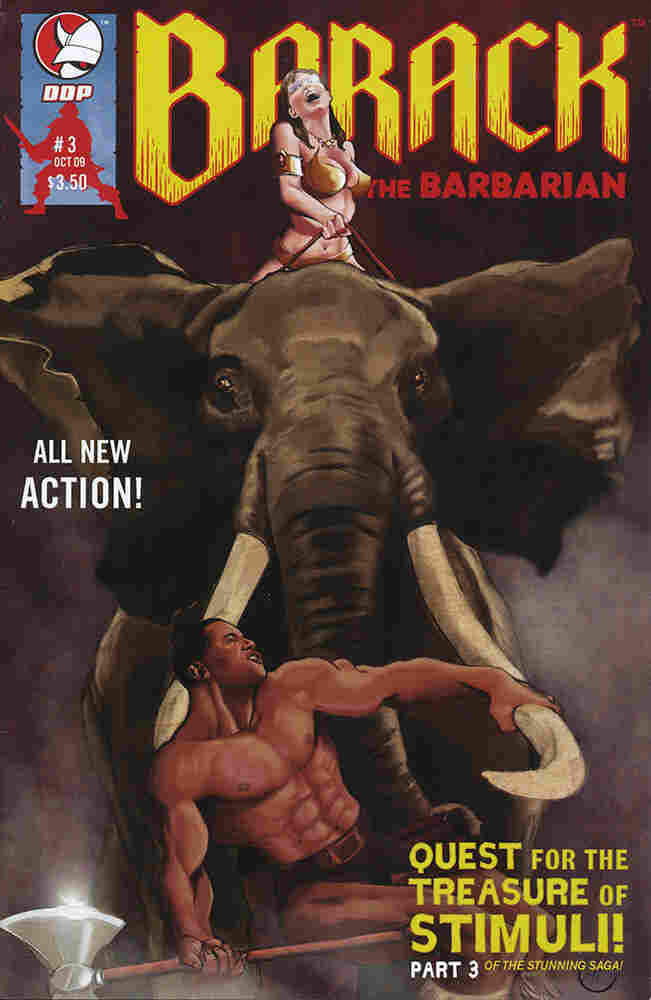 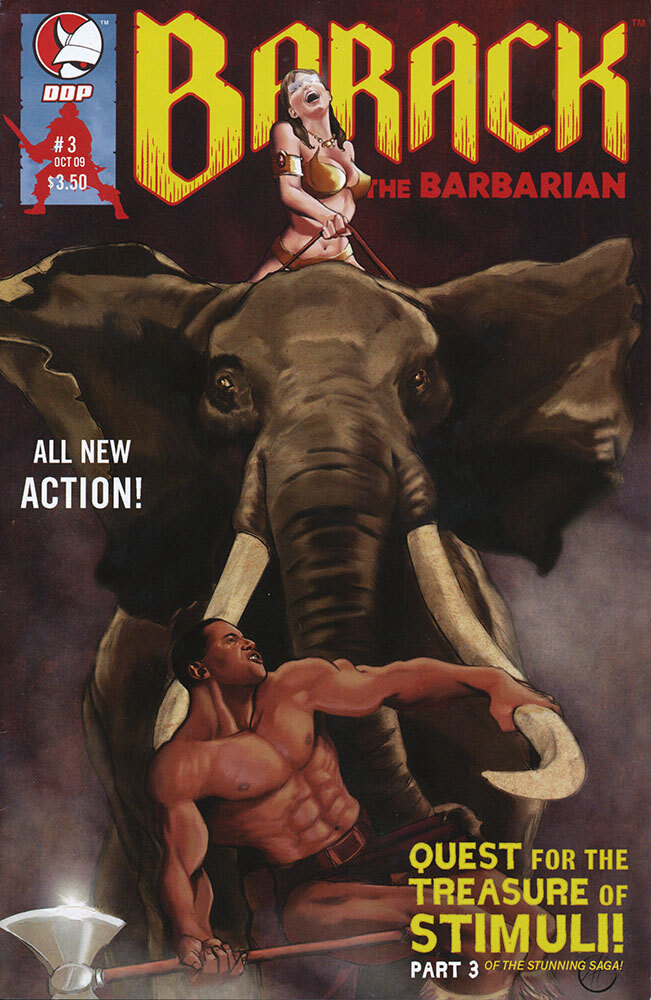 On Our Two-Way Blog

As Obama Works Out, Our Intrepid Reporter Spots 'Barack The Barbarian' April 28, 2010

We didn't see the line of people who had waited days earlier to get tickets, or the hours of security screening the audience went through once they arrived at the hall. And once the speech was over, we were gone.

Sometimes, plans change at the last minute. Wednesday morning the president decided to hit the gym in Des Moines. Reporters waited next door at a coffee and comic book shop. That's where we spotted a comic book called Barack the Barbarian.

The cover showed a shirtless Obama, abs rippling, holding a battle ax in one hand and an elephant tusk in the other. Sitting on top of the elephant was his nemesis, Red Sarah, laughing maniacally. I bought the comic and some of the White House staff asked to see it.

Back on Air Force One, when we were done with the serious questions, I decided to ask spokesman Bill Burton about Barack the Barbarian. He'd seen the comic book. "I liked it," he said, "because it had few words and lots of pictures, which made it easy to understand.

"When you come to Iowa," he said, "you see all sorts of fun things."

I know exactly how he feels.