Accessibility links
Day Of Prayer Becomes Culture War Skirmish As presidents have done every year since 1952, President Obama on Thursday will issue a proclamation urging people to "turn to God in prayer and meditation." But recently, a federal judge put a little damper on the National Day of Prayer and set activists on both sides of the issue in overdrive. 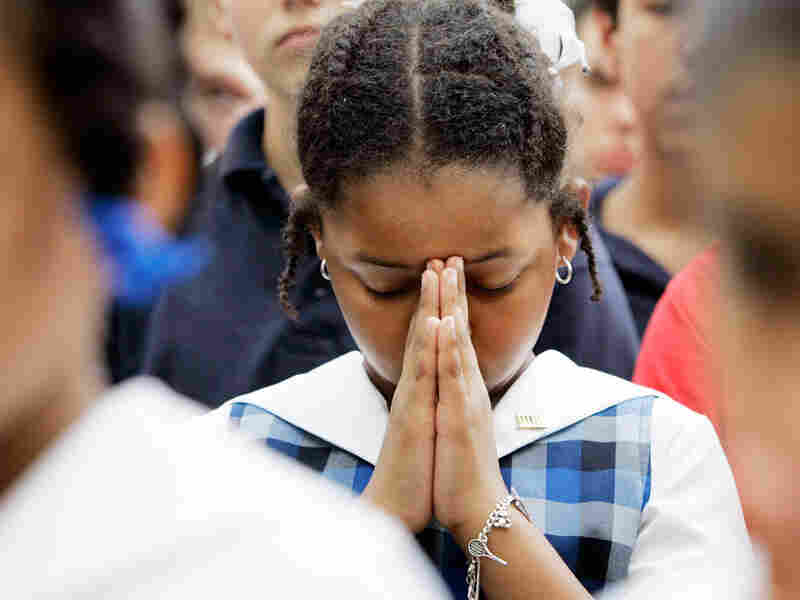 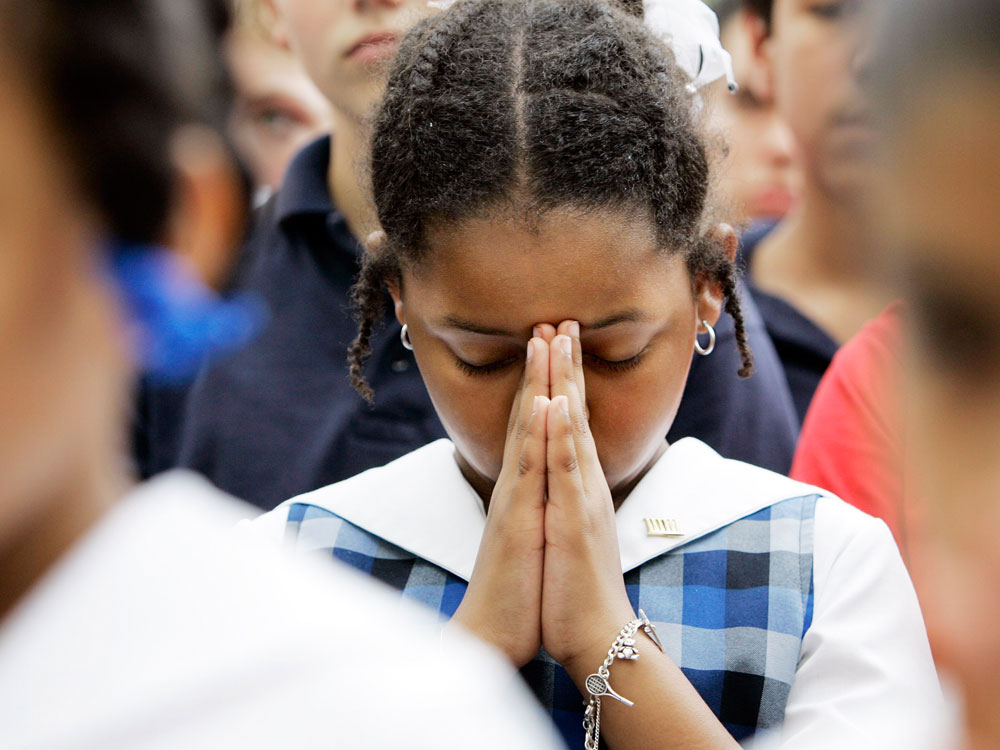 Alexandria McPherson, 8, prays during a National Day of Prayer gathering at City Hall in San Antonio in 2007.

As presidents have done every year since 1952, President Obama on Thursday will issue a proclamation urging people to "turn to God in prayer and meditation." Tens of thousands of people across the country will gather to celebrate the National Day of Prayer. But recently, a federal judge put a little damper on the half-century-old event.

For now, the culture war that resulted has left some undeterred. Take the residents of Mount Prospect, Ill. If past is prologue, about 200 of them will cram into a banquet hall on Thursday morning to eat, sing but mainly pray for the leaders of the nation, the state and the town's mayor, Irvana Wilks.

"We all fall short, especially when we're elected officials, and we all really need those prayers," Wilks says.

We all fall short, especially when we're elected officials, and we all really need those prayers.

The mayor will be there along with other Christians, Jews, Muslims and Baha'is. She says people look forward to the annual breakfast because it gives them an inside look at other people's faiths.

"It's a day that lives on in people's memories," Wilks says. "They'll mention to me, 'I love that speaker; it was so inspirational.' "

But Annie Laurie Gaylor, who runs the Freedom From Religion Foundation with her husband, says the National Day of Prayer is unconstitutional -- nothing less than government endorsement of religion.

Last month, a federal judge in Wisconsin agreed. Judge Barbara Crabb struck down the 1952 statute that called for a national day of prayer, although she wrote that prayer events may take place until all the appeals are exhausted.

With this legal victory in hand, Gaylor wrote every governor and the mayor of every city with more than 30,000 people. She urged them to abandon the prayer events this year, saying they disenfranchise those who don't believe in God.

"We also quoted the Sermon on the Mount, where Jesus points out that if you pray, you should pray in secret to your Father, otherwise you're a hypocrite," Gaylor says. "We have both the Bible and the Constitution in our favor -- that the government should not be in the prayer business." 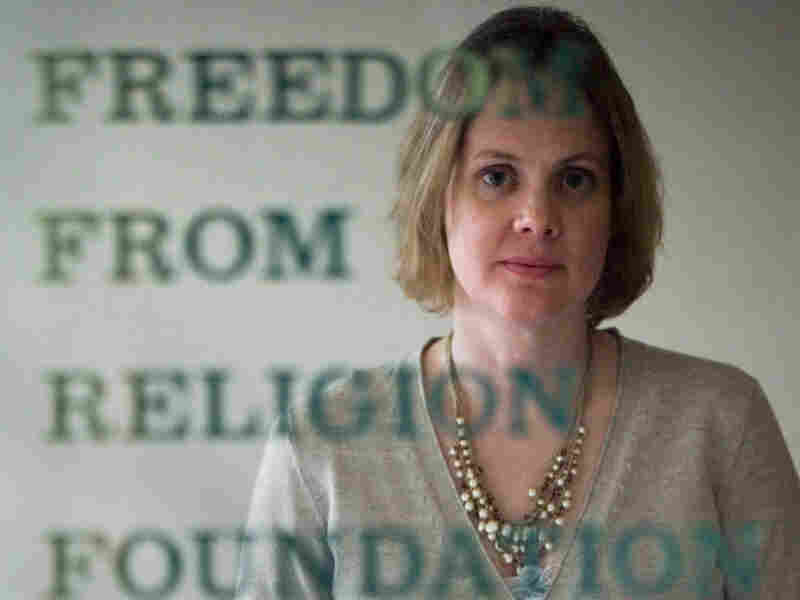 Annie Laurie Gaylor, who runs the Freedom From Religion Foundation with her husband, says the National Day of Prayer is unconstitutional -- nothing less than government endorsement of religion. Gaylor is shown here in 2007. Morry Gash/AP hide caption 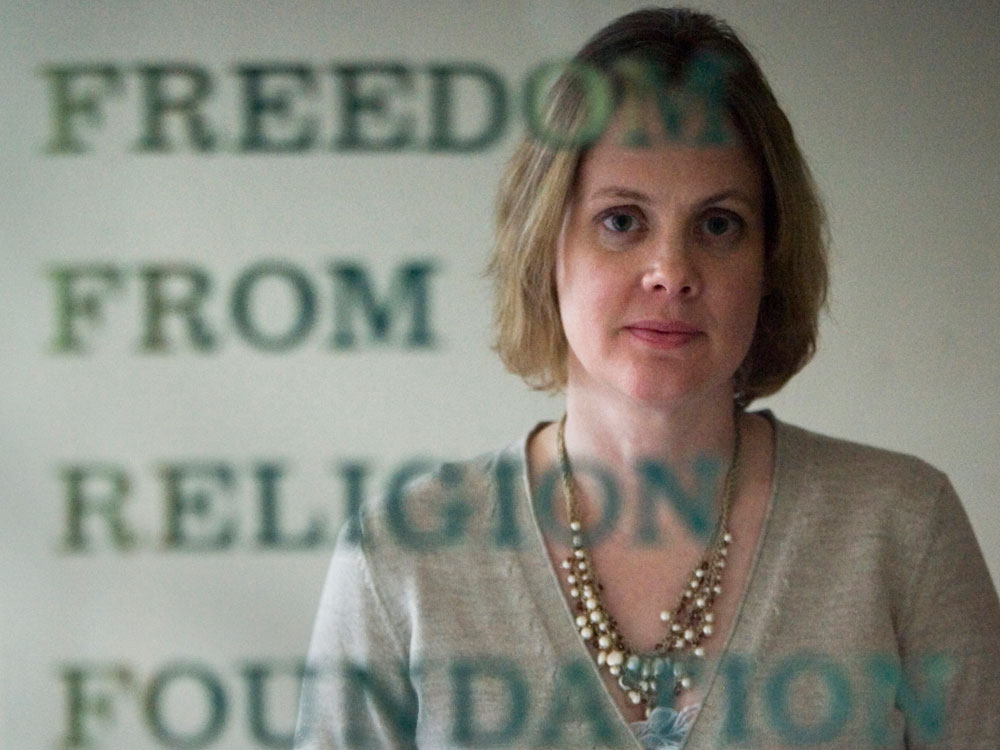 Annie Laurie Gaylor, who runs the Freedom From Religion Foundation with her husband, says the National Day of Prayer is unconstitutional -- nothing less than government endorsement of religion. Gaylor is shown here in 2007.

Michael Calhoun, spokesman for the National Day of Prayer Task Force, says the ruling amounts to "an attack upon the religious heritage of Americans."

Calhoun says setting aside a day for prayer and meditation is a tradition that dates back to the Founding Fathers. His group is mobilizing thousands of volunteers to "save" that practice.

"We don't want to be the generation that loses the National Day of Prayer," Calhoun says. "It's time for Americans to take a stand and say, 'Enough is enough! No longer will an atheist in Wisconsin undermine a tradition for millions of Americans who simply want to pray for their nation.' "

Alliance Defense Fund, a conservative legal group, is sending out letters to mayors and governors saying that the day of prayer is constitutional. ADF attorney Michael Johnson believes the decision will be overturned, especially if it gets to the U.S. Supreme Court.

"Their whole case is premised upon the idea that just because they claim to be offended by it, they should be able to challenge the National Day of Prayer statute and have it struck down," he says. "We disagree with that. The First Amendment simply doesn't provide any of us with a right not to be offended."

I have no problem with having a day of prayer as long as it isn't government sponsored.

But Cecil Bothwell, an atheist and City Council member in Asheville, N.C., says the prayer advocates are missing the point.

"I have no problem with having a day of prayer," Bothwell says, "as long as it isn't government sponsored."

Bothwell says he's not bothered by the two privately sponsored prayer events that will take place in his town on Thursday because the government is not endorsing or paying for them. Moreover, Bothwell doesn't think politicians will start shunning the National Day of Prayer -- at least not right away.

"I'm very aware I'm among a very small group of political people who will admit they are not believers," Bothwell says. "However, quietly, I've had other politicians come to me and say, 'I agree with you, but I'm afraid to say anything in public.' "

Gaylor thinks that is beginning to change. She says that now that the number of secular people in the U.S. has greatly increased, her arguments are gaining traction.

"It's not that we're feeling emboldened; it's just that there's more of us," she says. "And we are offended and injured when our government tells us that we have to pray and when to pray and why to pray."

And even if the National Day of Prayer is upheld by the courts, Gaylor believes they've added a few bricks to the wall separating church and state.