Accessibility links
In Shanghai, Alternatives To The World Expo Far from the glitzy pavilions of Shanghai's World Expo, artists, peasants and a rights activist are mounting their own expositions, telling the stories of individual Chinese and their struggles. 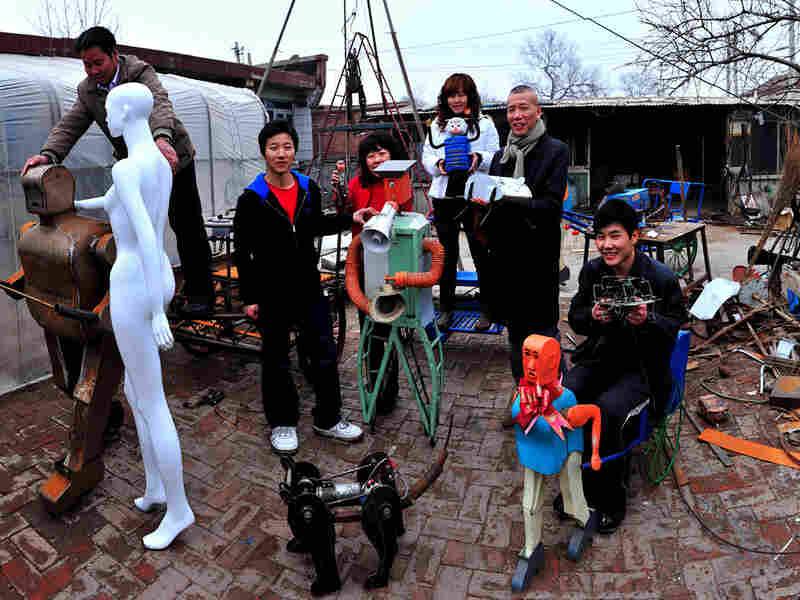 Inventor Wu Yulu and his family with their various robots. He sees his participation in this alternative exhibition to Shanghai's lavish World Expo as a chance to "win glory" for China's peasants. Courtesy Lin Yi for Cai Studio hide caption 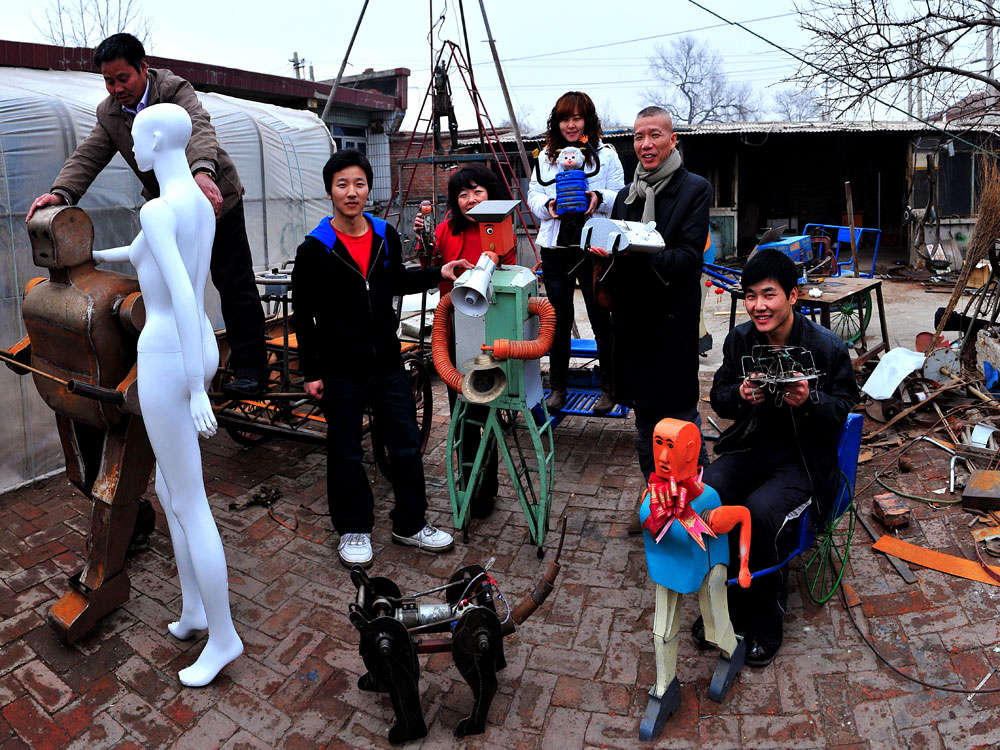 Inventor Wu Yulu and his family with their various robots. He sees his participation in this alternative exhibition to Shanghai's lavish World Expo as a chance to "win glory" for China's peasants.

But elsewhere in the city, citizens are putting on alternative expos to fill in the blanks left by the official Expo.

A nondescript apartment block in the north of Shanghai is the nerve center of one alternative expo. From the outside, nothing is unusual, except an unmarked car at the entrance, its doors open, four plainclothes policemen waiting inside, ready to intercept strangers.

Members of the foreign press corps are allowed to visit, but ordinary Chinese citizens are not. This is how rights activist Feng Zhenghu lives, pretty much as a prisoner in his own house right now, having been under such close surveillance since March.

Last week, police confiscated 27 of his possessions, including four computers in a move aimed at styming his attempts to set up an online expo of judicial injustice. He says they also threatened him with charges of "libel and slander."

"My expo includes 12 cases that happened to me," explains Feng Zhenghu, who envisages his expo will run for six months, like the official Expo. He plans to post all the documents from his cases online, to allow the public the right to see and comment on each case.

"They touch upon the freedom to publish, internet freedom, leaving China and not being allowed back in, as well as personal freedom issues, such as being under house arrest, or being kidnapped. All these things happened to me," he says.

The economist and legal activist gained notoriety when China refused to allow him back into the country from Japan. So he camped out in Tokyo's Narita International Airport for three months, extensively blogging and tweeting each step of his experience.

He vows that, although his computers have been confiscated, he will manage to hold his online expo. He admits it may be delayed by difficulties, but believes the nature of the internet is such that Chinese officials are powerless to stop him entirely.

Feng argues that the official Expo has indirectly led to human rights abuses, including those evicted from buildings demolished to create the Expo site.

These peasants' objects are different from the type of national, corporate power connected with the Expo. Until now, you only hear the collective voice of Chinese, but this is about individuals' voices.

Cai Guo-Qiang, one of China's most famous artists

"Officials didn't give residents compensation when demolishing their houses. Then they violated their personal freedom, too. Those are the negative things brought by the Expo," says Feng Zhenghu.

The Geneva-based Center on Housing Rights and Evictions estimates that development of the Shanghai Expo site prompted the eviction of up to 18,000 citizens, some of whom are attempting to take legal action against the Paris-based organizer, the International Exhibitions Bureau.

One victim of forced eviction, Hu Yan, has traveled to the U.N. in New York to try to raise the profile of these residents.

Despite the downsides, Feng Zhenghu says he supports the idea of the World Expo, and hopes it will ultimately bring positive change on human rights.

Across town, an artistic critique of the official World's Fair offers a very different take. It is based in a renovated art deco building on a busy little street close to Shanghai's famous waterfront. On top of the building, which is painted with slogans, there is a revolving silver object which looks kind of like a UFO. In the courtyard there's a jerrybuilt airplane with rickety canvas wings.

This is the new Rockbund Art Museum, where Cai Guoqiang, one of China's most famous artists, is putting on a show called "Peasant da Vincis." It was conceived as an artistic counterpoint to the official Expo, and it showcases inventions by China's farmers, celebrating their spirit of ingenuity.

Cai shouts directions to workers as they hang a rusty fish-shaped submarine with moving fins from an atrium. The show includes a plywood airplane that never got off the ground and the UFO on the roof, whose inventor never bothered to consider how it would land. This scrappy experimental spirit is a world away from the polished iconic images presented by the national pavilions.

"These peasants' objects are different from the type of national, corporate power connected with the Expo," says Cai. "Until now, you only hear the collective voice of Chinese, but this is about individuals' voices." 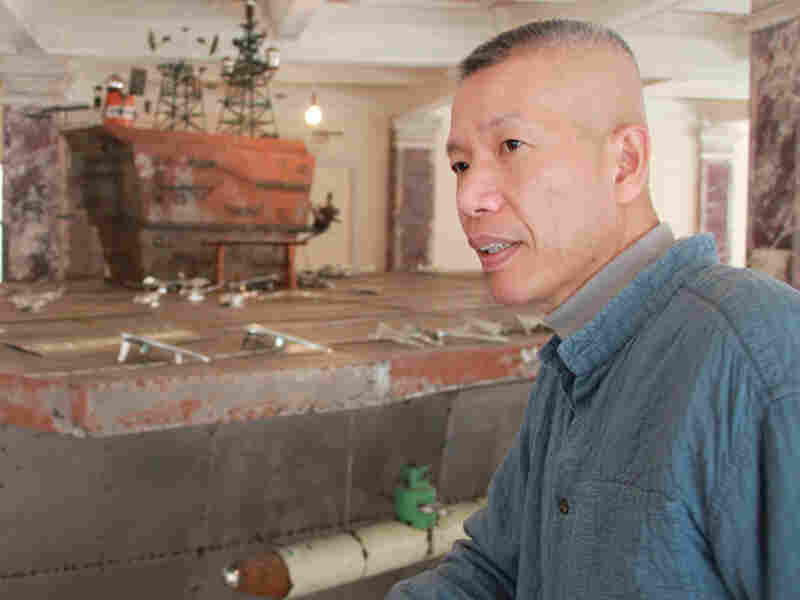 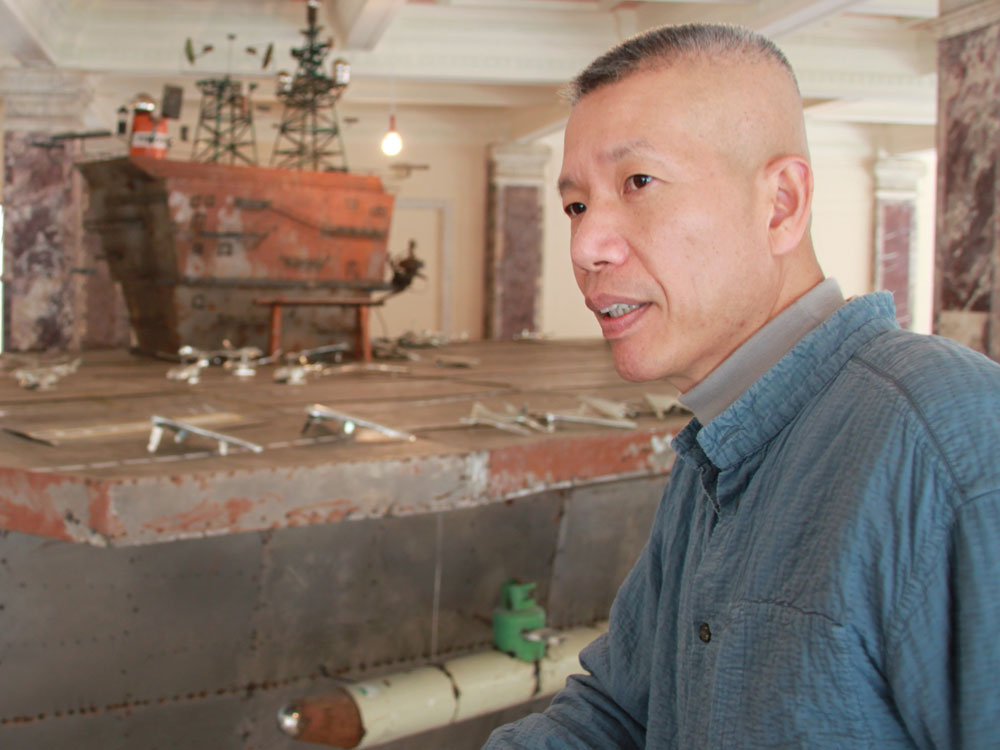 The display includes a robot, with swiveling eyes, that pulls a rickshaw and talks, saying "My dad's name is Wu Yulu. I'm taking him for a ride." The robot's dad -- sitting in the rickshaw, beaming with paternal pride -- is robotmaker Wu Yulu, a peasant. For this show, he's showing a number of his inventions, including specially commissioned artist robots, like a Robot Jackson Pollock, which drips paint on canvas, and a robot Damian Hirst, which creates art out of colored dots.

Robot rats also scurry around the floor, and a robot infant toddles past. Wu Yulu had just five years of schooling, and has been mocked for years by other peasants for his robot obsession. That is why taking part in this exhibition is a big deal for him.

"It's hugely significant. I'm representing peasants at this exhibition. I'm winning glory for peasants. It seems like peasants have been a bit neglected in the official Expo," he says.

Other peasant inventors present include Tao Xiangli, a 34-year-old farmer from Anhui, who has built a model of an aircraft carrier for the show. One of his early successes is a working submarine, which he built by trial and error, without using the Internet. Now he's concentrating his energies on a triple-use vehicle -- an aircraft, car and submarine rolled into one. He says a small prototype vehicle works, but it’s his dream to make a full-size model.

Artist Cai has invented his own exhibition slogans, which poke gentle fun at China's obsession with propaganda.

On an entire outside wall of the building, underneath the flying saucer, are painted the words: "Never learned how to land." It refers to Du Wenda, the inventor of the flying saucer, who was so concerned with designing it to take off that he didn't bother thinking about the landing. But it is also a reflection on China's seeming unstoppable economic miracle.

"This city's construction, its labor force, is all made up of peasants. These tall buildings, these roads, these subways, they were all built by peasants," says Cai.

Both this -- and Feng's one-man expo of injustice -- move beyond the official narrative. They tell stories not of China as a grand nation, but of individual Chinese and their struggles.