Accessibility links
Alabama Waits For The Oil Spill's First Casualties A massive oil slick is fouling the Gulf's fragile coastal ecosystem and taking aim at the industries that rely on it. In Alabama, residents are waiting for the damage to begin. 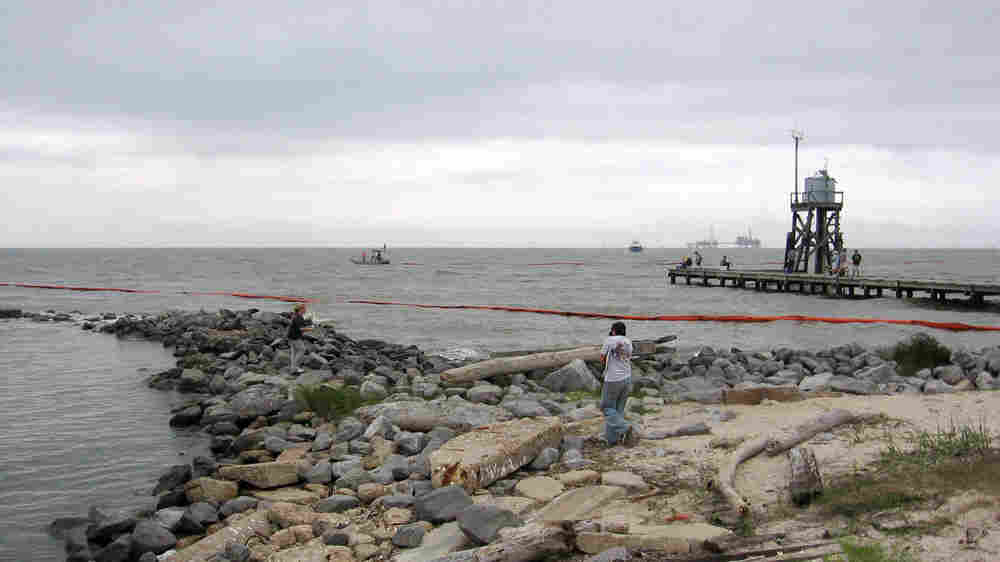 Containment booms designed to be a protective barrier circle Dauphin Island at the mouth of Mobile Bay in Alabama. Debbie Elliott/NPR hide caption 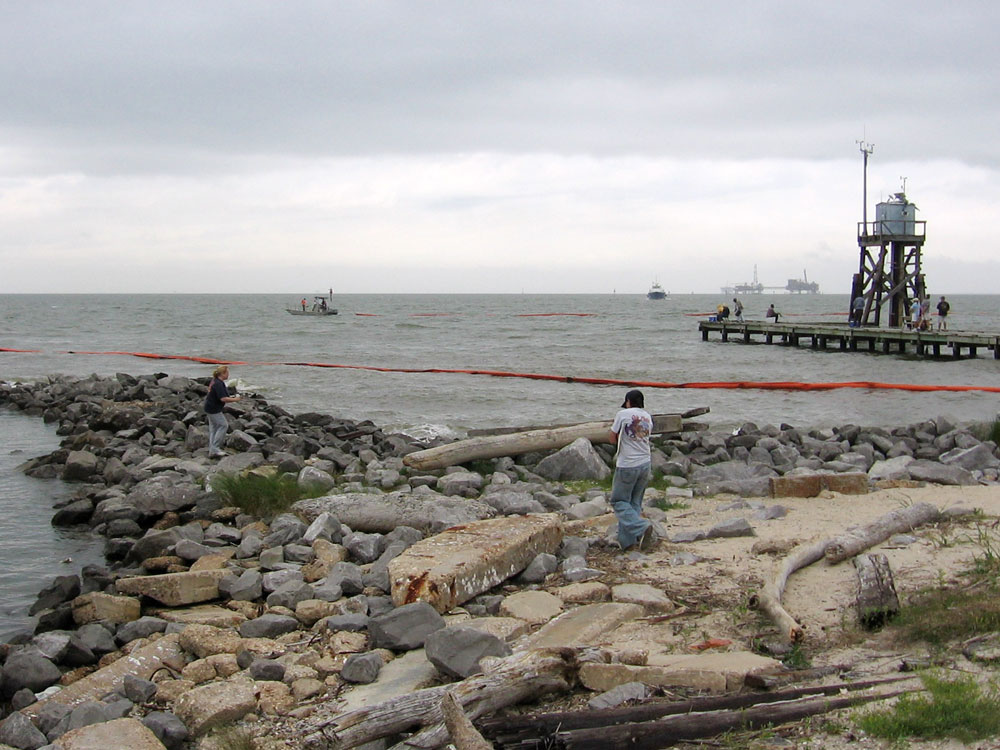 Containment booms designed to be a protective barrier circle Dauphin Island at the mouth of Mobile Bay in Alabama. 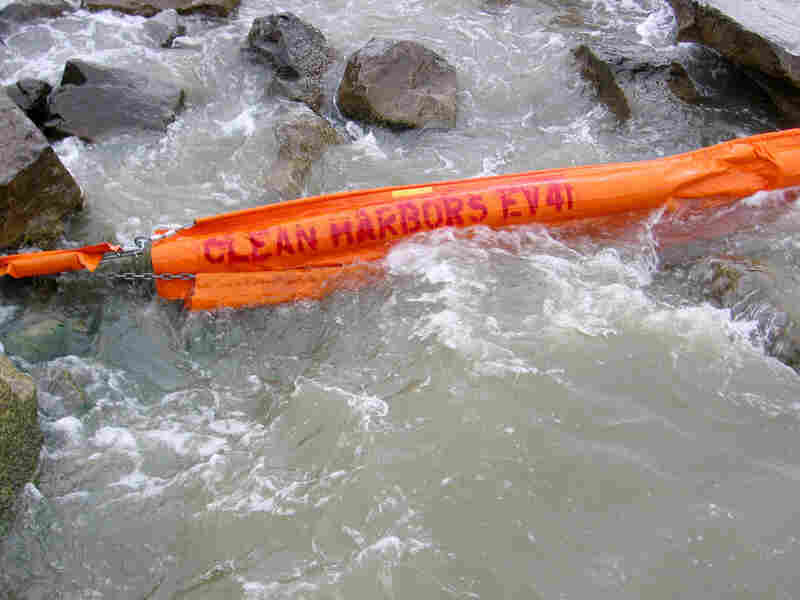 Mobile Bay is in the heart of the Gulf's "fertile crescent," where an estimated 90 percent of the Gulf's seafood is produced. Debbie Elliott/NPR hide caption 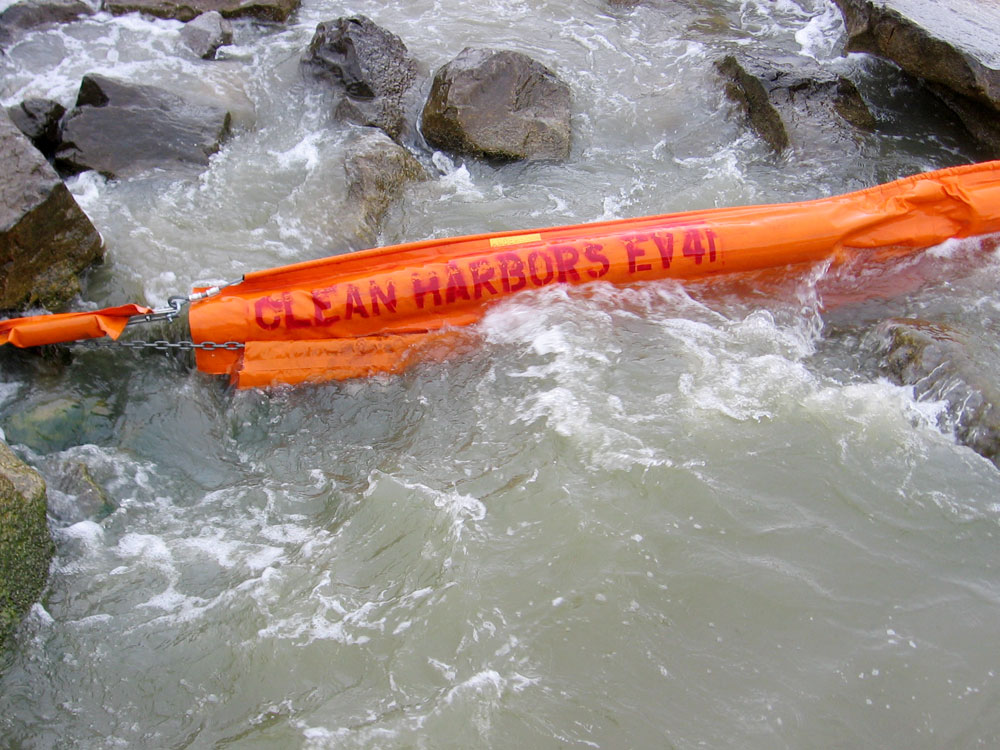 A massive oil slick is fouling the Gulf's fragile coastal ecosystem and taking aim at the industries that rely on it.

Strong winds and rough seas have prevented skimming and burning operations designed to reduce the slick. Meanwhile, more than 200,000 gallons of crude oil a day are spewing unchecked from a deepwater well where an offshore platform exploded and sank.

Homeland Security Secretary Janet Napolitano was among the Obama administration officials who traveled to Louisiana on Friday to assure residents the government was doing all it could.

"The response is strong. It's coordinated, and it's designed to minimize the harm to our coastal lands and that, to the extent there is harm, there is swift and effective cleanup," she said.

But there's growing frustration over BP's inability to stop the flow and keep the oil slick away from land. Louisiana Gov. Bobby Jindal said containment booms designed to be a protective barrier have not been effective.

In Alabama, residents are waiting for the damage to begin.

Wondering What Will Survive

Dr. George Crozier, director of the Dauphin Island Sea Lab, stands on a boardwalk overlooking a marsh he describes as a nursery. "This is what worries me, right here," he says.

"Shrimp, oysters, crab, flounder, even red snapper larvae have been found in here. Almost everything that we value comes in here as a baby. A lot of life in here now. Birds and pelicans flying around -- and it's open to the Mobile Bay."

Mobile Bay is in the heart of the Gulf's "fertile crescent," an area stretching from Texas to the Florida panhandle, where an estimated 90 percent of the Gulf's seafood is produced. Nutrients from the Mississippi and Mobile deltas create rich estuaries. Now, Crozier says, that productive system is at risk and no one really knows how it will respond to the oil.

"We could be about to watch something happen, that's completely man-made, that the natural system hasn't ever seen before."

The question is when, and what will it look like? To track the impact, the Sea Lab is collecting samples from the Gulf and its estuaries as the crisis unfolds.

"The better we understand what happens, the better we may be able a year from now to project where we're going to go -- how is the ecosystem going to re-equilibrate to this new world?" Crozier says. "In five years, we may be able to say it isn't ever going back to the way it was in 2009, 2010. This is a new world."

Losing A Way Of Life?

That uncertainty is unsettling for Paul Nelson, a commercial fisherman in Coden, Ala., and member of the South Bay Communities Alliance. He looks out over Portersville Bay, where his family has been making a living for generations.

He lost his shrimping boats and his family's oyster business in Hurricane Katrina. "And now with this, this is going to set us back and our way of life. If this does what we as commercial fisherman ... think it can do, it can destroy us for the next 50 years."

Alliance member Nancy McCall says she learned to swim and find food in these waters. "Our uncles and dads would throw nets and pull fish out," she recalls. "This is what brought my grandparents here, is this bay out here."

McCall says she never thought of living anywhere else, but now wonders whether the community can survive what's coming.