Accessibility links
Obama Says Oil Spill Damage Could Be Unprecedented President Obama traveled to Louisiana Sunday to assure coastal residents that the government is doing all it can to control the oil spill in the Gulf of Mexico. He had little good news to offer, though. Oil continues to flow out of control from a wellhead nearly a mile below the surface of the Gulf, and Obama warned it could keep flowing for a long time. 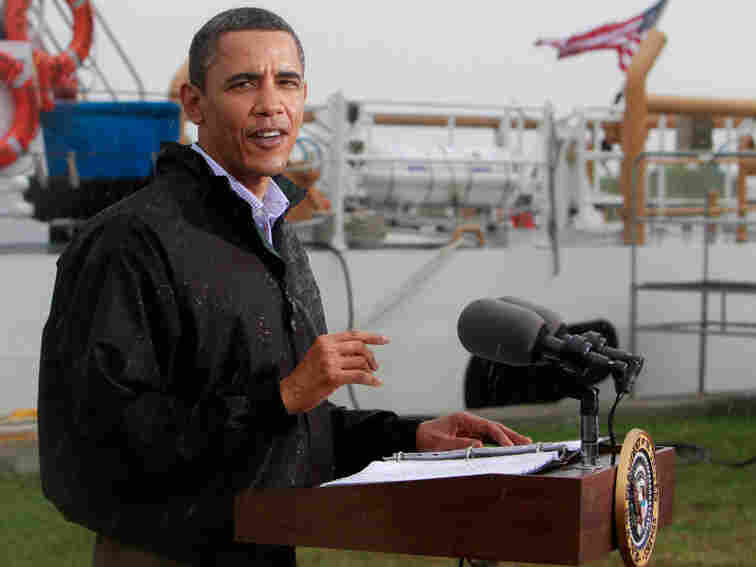 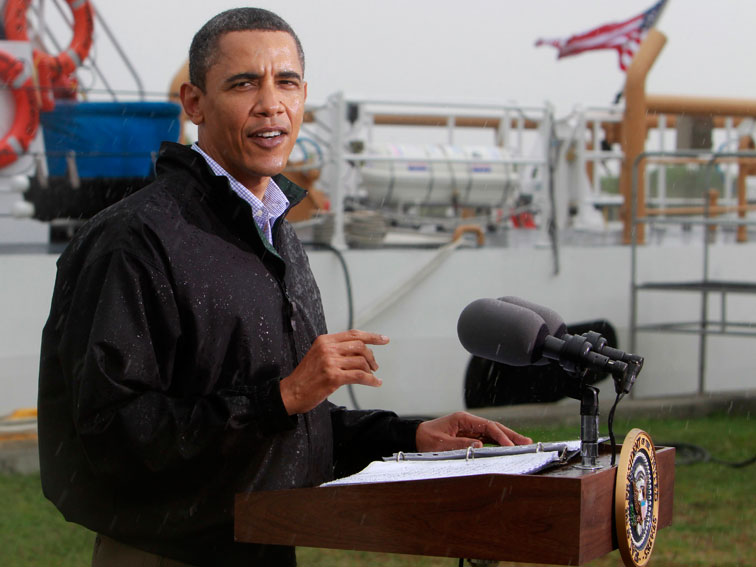 President Obama talks to reporters Sunday in Venice, La., as he visits the Gulf Coast region affected by a massive oil spill.

President Obama traveled to Louisiana Sunday to assure coastal residents that the government is doing all it can to control the oil spill in the Gulf of Mexico. He had little good news to offer, though.

Obama flew over the marshes of Louisiana's Plaquemines Parish, where rich oyster and shrimp beds are jeopardized by the spill.

Oil continues to flow out of control from a wellhead nearly a mile below the surface of the Gulf, and Obama warned it could keep flowing for a long time. "I think the American people are aware, certainly the folks down in the Gulf are aware that we're dealing with a massive and potentially unprecedented environmental disaster," Obama said.

The president said crews are using the most advanced technology to try to stop the leak, but efforts to cap the well have so far been unsuccessful.

The next most likely solution -- a kind of funnel that would capture leaking oil and pump it to the surface -- is untested at this depth and expected to take another week or so.

In some areas, high winds have kept the oil away from shore. But in general, the weather has not been helpful, either to cleanup crews or to the president's photo op.

Rain began to fall, just as Obama stepped to the microphone in front of a shiny white Coast Guard cutter. It quickly turned into a heavy shower.

"I just want to point out, I was told it was drizzling out here," Obama said with a chuckle. "Is this Louisiana drizzle, right here?"

Early on, experts made a similar misjudgment about the severity of the oil spill. When a drilling rig working for BP exploded, 13 days ago, authorities first thought the well had been capped. That's what is designed to happen.

Even when they discovered oil was leaking, they underestimated the amount. Nine days passed before Homeland Security Secretary Janet Napolitano declared this spill "nationally significant."

"The physical response on the ground has been, from Day 1, as if this could be a catastrophic failure," Napolitano said on NBC's Meet the Press Sunday.

But that response has not prevented the oil from threatening sensitive shoreline, not only in Louisiana but in Mississippi, Alabama, Florida and beyond.

The government is forced to rely on BP for the most important task: trying to control the leaking well.

The government halted fishing in a huge swath of the Gulf, from the mouth of the Mississippi River to Pensacola Bay, Fla., on Sunday.

In meeting with Louisianan fishermen, Obama talked about setting up a process to handle the damage claims against BP that are now inevitable.

"I've heard already that people are understandably frustrated and frightened, especially since people in this region have been through worse disasters than anybody should have to bear," Obama said. "Every American affected by this spill should know this: Your government will do whatever it takes, as long as it takes, to stop this crisis."

The president won some points just by showing up.

As his motorcade snaked past oil refineries and seafood stands, supporters stood along the roadside, waving.

A gas station posted a sign reading, "Welcome, President Obama. Thanks for coming."

Gulf Town Asks God To Protect Their Livelihoods May 3, 2010
Grim Outlook For Oil Spill; Fishing Ban In Effect May 2, 2010