Accessibility links
Book Review: 'For Better: The Science Of A Good Marriage' By Tara Parker-Pope Tara Parker-Pope's new book, For Better, offers a scientific perspective on maintaining a good relationship post-nuptials. While reviewer Susan Jane Gilman says Parker-Pope gives an interesting look on the science behind couple dynamics, much of the information comes from a story we've all heard before. 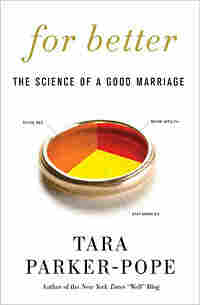 Are you married? If so, how did you meet? According to Tara Parker-Pope, the way you recount this story reveals a lot about the state of your union. If you recall your first date affectionately, chances are, your marriage is strong. But if your tale is tinged with bitterness? You're probably in trouble.

This isn't Parker-Pope's opinion: It's based on a scientific study.

Her new book, For Better: The Science of a Good Marriage, is a compendium of such research. Good marriages, she argues, are good for us -- and science can help us achieve them. Drawing upon fields from neuroscience to sociology, her book offers prescriptions "for marital health" -- practical strategies to help couples improve their relationship.

Parker-Pope paints a statistical portrait of marriage today. Some of her findings are surprising: Divorce rates in America are actually dropping. Conflict is good, even vital, for couples. Married people have more sex than anyone. And the more financially independent women are, the more likely they are to stay married.

When it comes to problems, debt and children are obvious culprits -- but so is rolling your eyes at your spouse. So is using the pronoun "you" instead of "we."

For Better is half myth-buster, half self-help. It's a cleanly written, serviceable book that can be useful for couples -- or even singles contemplating the plunge.

Yet as a read, it leaves something to be desired. To be fair, I approached For Better with the same lofty expectations many of us bring to marriage itself. I love the idea that there’s a science to marriage. And so, I yearned to be swept away by this book -- intellectually turned-on. As with a great romance, I wanted fireworks.

Instead, I got the publishing equivalent of a nice robe and slippers. Well-crafted, comforting, helpful -- yes. For Better is a good gift for the lovelorn. But while there's illuminating research in it -- especially comparing gay and straight marriages -- there's also plenty of stuff, frankly, I've heard before. Its quizzes could have come straight from a magazine.

For Better, in short, could be better. Its potential isn't fully realized. Marriage has undergone radical changes in America. In the 19th century, women legally became non-people the moment they tied the knot. Once married, they were prohibited from keeping their own money and property, signing contracts or filing lawsuits. Their husbands often had the right to abuse them. In fact, spousal rape wasn’t outlawed in all 50 states until 1993. Yet Parker-Pope only notes that marriage used to be an economic and social contract not based on love. She focuses on the science of marriage but ignores its evolution -- and her book is flimsier for it.

And, while she celebrates today's egalitarian ideal of marriage, her research poses some interesting challenges to this. Men's and women's brains are wired differently, she claims, and we're biologically predisposed to certain gender roles. If so, are truly equal partnerships possible? Is biology destiny after all?

In the end, I wanted For Better to go beyond factoids and marital aids to become a deeper, more provocative read. Maybe I'm asking too much -- or seeking a different book entirely. But For Better urges couples to insist on high standards. And for better or worse, I've followed its advice.

Susan Jane Gilman's latest book is the memoir Undress Me in the Temple of Heaven. She is the author of the best-selling Hypocrite in a Pouffy White Dress and Kiss My Tiara.

Excerpt: 'For Better: The Science of a Good Marriage'

The Story of How You Met

How did the two of you meet? Was it love at first sight? Did you date for a long time or was it a whirlwind romance?

Newlyweds and long-married couples often are asked to recount the details of their first date, their courtship, or even the wedding proposal. Perhaps you were high school sweethearts or maybe you met through an online dating service, at the grocery store, or through a blind date arranged by friends.

But what does a story of how you met years ago have to do with how you are getting along with your spouse today? Relationship researchers are keenly interested in hearing how couples met as a way to gauge the quality of their relationship now. But the actual details of the story are far less important than how the two of you tell it. Your personal romantic narrative, as told by you or your partner, is filled with clues about the state of your relationship today and can predict whether trouble looms ahead.

Studies show that each couple's back story is particularly revelatory about the present state of their relationship. One of the earliest studies of the value of a couple's "how-we-met" story was published in 1992. John Gottman and his colleagues at the University of Washington took oral histories from fifty-two couples, and their stories were then coded and deconstructed. The couples, who had been married for an average of five years, also took part in laboratory-based discussions in front of cameras and strapped to body monitoring devices. Based on all the evidence the researchers had collected, they already had a pretty clear idea about which couples were happy and those who were headed for divorce.

Three years later, the researchers checked in with the couples again. The researchers had been virtually perfect in their assessments. The how-we-met story had predicted, with 94 percent accuracy, which couples would break up and who would stay together.

The how-we-met story is useful but slightly less predictive in newlywed couples -- the relationship is still evolving and couples have yet to settle into a pattern. Even so, talking to a couple about their early romance, even when they are still in the midst of it, can identify potentially troubled relationships. In one study, the researchers collected how-we-met stories from ninety-five newlyweds, and then they checked in again at different intervals for the next nine years.

Why is the how-we-met story so important? Typically, the early days of a relationship are the most romantic and the most love-struck. Put us in a brain scanner when we are in the early days of romantic love and we will look like we are crazy or on drugs. The parts of the brain that involve critical thinking are shut down -- that's why we aren't troubled by obvious flaws like a filthy apartment or lavish spending habits. Meanwhile, our brains are awash in a dopamine surge and we feel dizzy and exhilarated by love. All of the memories we are creating during this time are tinted by the rose-colored glasses of the newly in love.

And when we are happy in our relationship, we remember the early days with pretty much the same rosy-tinted optimism. But once we become dissatisfied with our partnership, at some point perceptions shift. It's not that we make up problems that never existed. It just becomes far easier to recall the negatives than the good times. And we end up recasting history to reflect our current state of discontent.

Is the story of your early courtship filled with nostalgia and optimism? Or is it tinged with negativity and regret? Do you remember getting lost in the rain together on your first date? Or do you just remember the fact that he refused to stop for directions?

Spouses who are in happy marriages often recount the early part of their relationship with laughter, smiles, and nostalgia -- even when talking about difficult times like a job loss or financial struggles. Unhappy couples, however, tend to recast their past times together in a decidedly negative light.

For instance, imagine a couple telling the story of the first time a wife visited her future husband's filthy apartment.

"My goodness, the place was a wreck! Socks everywhere, empty beer bottles. It was definitely a bachelor pad."

"It was disgusting. Even back then, he was a complete slob."

It's the same story about the same messy apartment, told two different ways. But it's clear which wife is happier in her relationship.

Consider my own how-we-met story from my first date with my husband in Austin, Texas. In the early days of my marriage, I would have recounted it this way:

But later, when the relationship began to sour, I sometimes told the story this way:

"After dinner, he suggested we take a walk around the Capitol building. I had just had surgery on my foot. Of course he didn't even notice that I could barely walk."

Even though I would often laugh while telling the story, I'm sure an experienced therapist would have clued in to my negativity long before I was even aware of it. And that's the value of the how-we-met story. In addition to having your partner tell your how-we-met story, listen to yourself and how you tell the story of your early courtship. What you learn will provide a useful snapshot of the state of your marriage today. 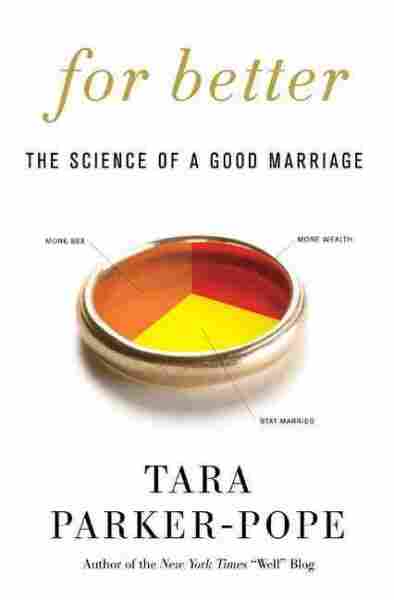 The Science of a Good Marriage