Accessibility links
U.S. Exhibit At Shanghai's World Expo Opens To Mixed Reviews The U.S. pavilion at Shanghai's World Expo formally debuted on Monday after months of financial struggle and controversy. Some visitors like the upbeat spirit offered by the pavilion. But others seem keen for hard information, rather than fuzzy, feel-good messages. 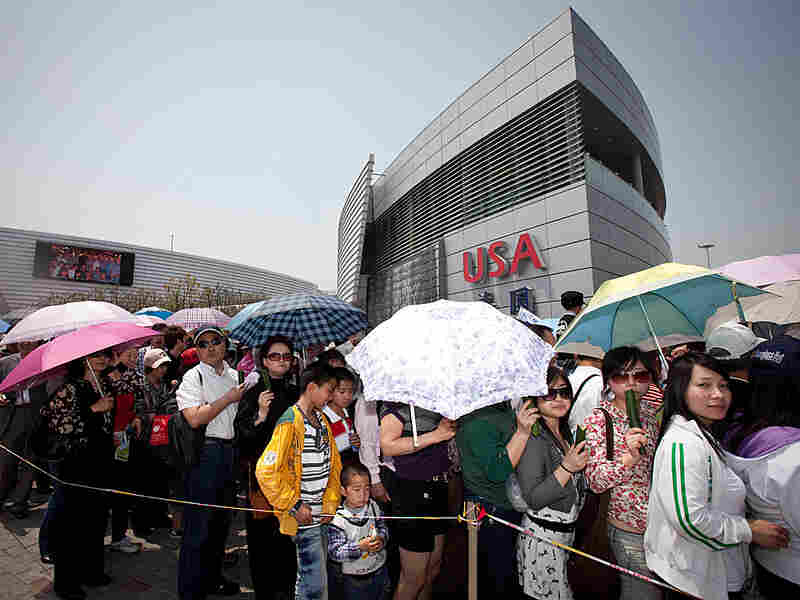 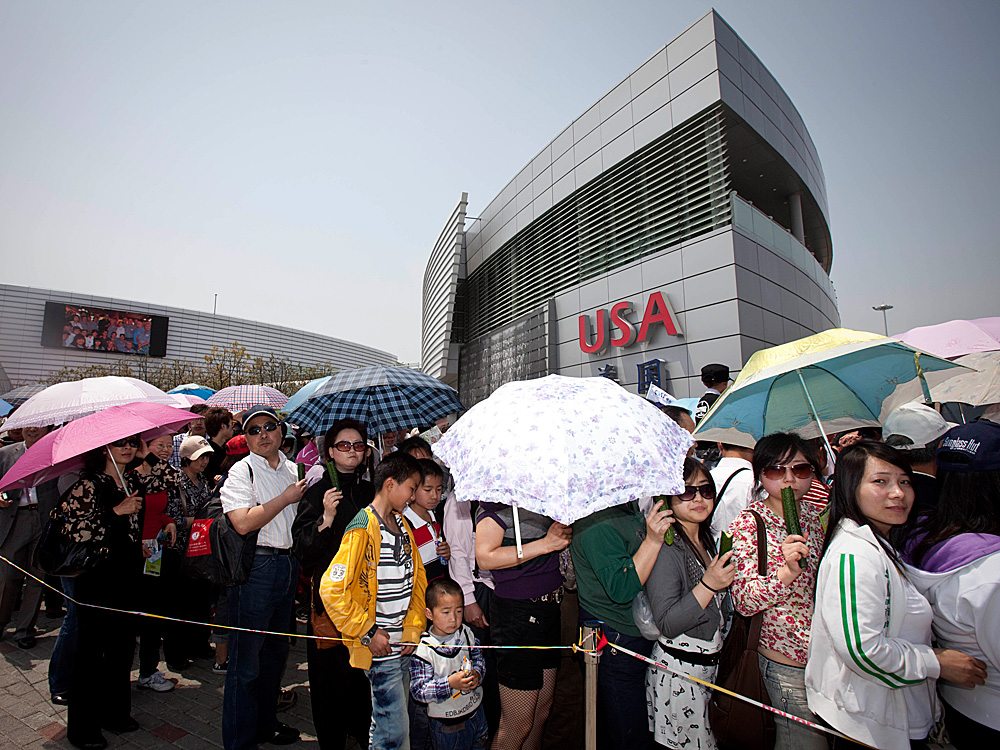 The embattled U.S. pavilion formally opened Monday after months of financial struggle and controversy. The United States was the last country to confirm its attendance at the Shanghai Expo, which is expected to draw 70 million visitors over the next six months. The U.S. project struggled to get corporate sponsors during a global recession.

So how has the U.S. been branded for today's Chinese, and what do Chinese visitors think of the pavilion?

Chinese visitors are fascinated by the U.S., and how it became a world leader. Some like the upbeat spirit offered by the U.S. pavilion. But others seem keen for hard information, rather than fuzzy, feel-good messages of optimism and collaboration.

I want to know more about U.S. politics, and how the country was built without internal chaos. That's what they should tell us.

Fan Weiming, a Chinese visitor to the U.S. pavilion

The morning began with a team of photogenic U.S. volunteers -- Expo "ambassadors" -- singing for the audience. They are American university students handpicked for their fluency in Mandarin Chinese.

In a speech, Huang Jianzhi of the Bureau of Shanghai World Expo Coordination remarked on the aptness of the U.S. theme "Rising to the Challenge." The U.S. pavilion struggled to raise $61 million from the private sector, since organizers received no federal money.

"The pavilion building saga is a metaphor for who we are as Americans. Once we set our mind to something, we get it done," said Jose Villarreal, a Texas lawyer and businessman serving as the U.S. commissioner-general of the American exhibition in Shanghai.

"U.S. corporations stepped up to the plate. That, too, is a powerful example of the values that we cherish as Americans, which is the importance of corporate social responsibility," Villarreal said.

As they enter the pavilion, the first thing visitors see is a wall listing the corporate sponsors. Even the no-smoking signs are sponsored by the pharmaceutical company Pfizer.

The crowds enjoy a short film that shows Americans greeting visitors in Chinese.

But as he watched, visitor Fan Weiming, a city planner from Jiangsu, said that the U.S. attitude toward the Expo makes him worry about Sino-U.S. ties.

"I don't think the U.S. paid much attention to the World Expo. It doesn't compare well to other countries, like Japan and Australia. We feel uncomfortable about this," Fan said.

The Japanese pavilion is one of the most expensive, at $140 million, while Australia's cost $75 million. 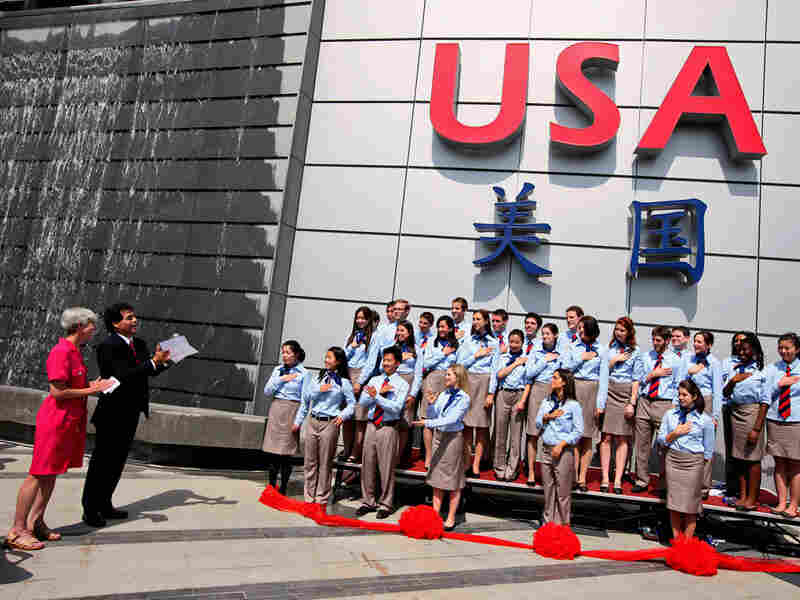 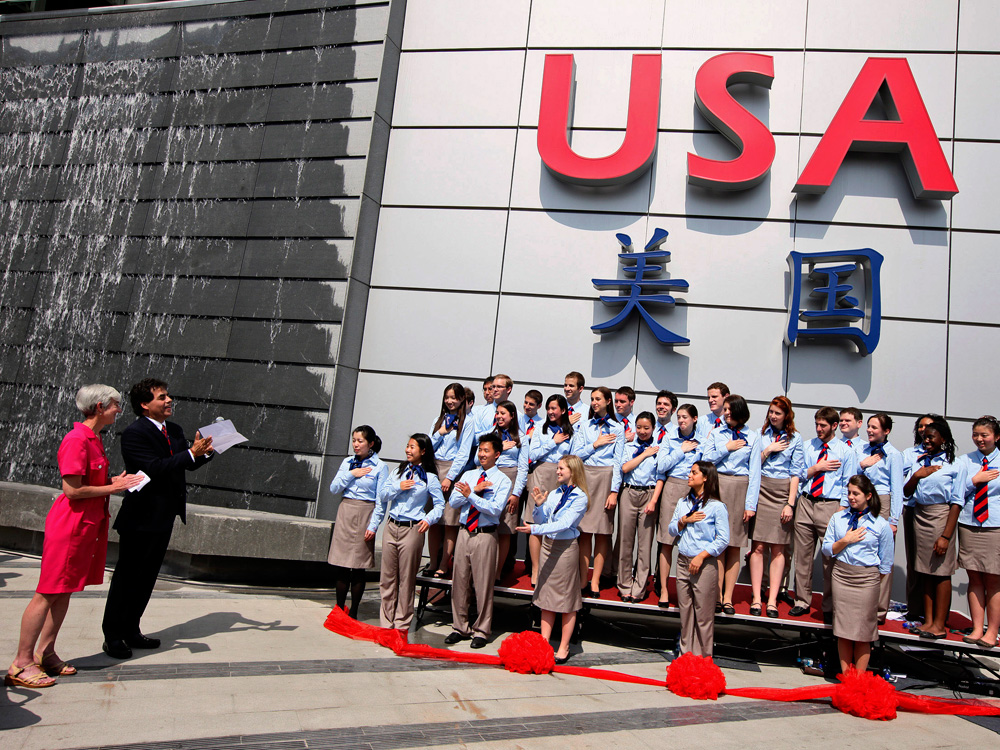 A second short film in the U.S. pavilion focuses on American values. It features several sponsors, such as executives from GE and Pepsi.

"We faced the initial challenge of putting 60 of the world's biggest brands under one roof," said content creator Greg Lombardo from Burbank, Calif.-based BRC Imagination Arts who created the pavilion shows. "This is actually much of a soft branding exercise. I think that's actually the remarkable story."

A final short film depicts a young girl bringing her neighbors together to create a community garden. The presentation's special effects include rain inside the theater, at which point the audience puts up their umbrellas.

Together, the three films cost $23 million -- more than the Oscar-winning film, The Hurt Locker -- prompting critics to raise questions.

"It's far from enough," he said, laughing apologetically. "I want to know more about U.S. politics and how the country was built without internal chaos. That's what they should tell us."

Other visitors, like engineer Zhang Deping, were enthusiastic. He said he has visited more than a dozen pavilions and the U.S. exhibit is one of the best.

He said he was fascinated by the pavilion's final salon, devoted to corporate sponsors.

"I like the commercial flavor. I want to know how U.S. has taken the lead in the economic field, and in science and technology," he said.

Surveys have shown that the U.S. is the most highly anticipated pavilion, next to China's own building. Waiting lines to enter the U.S. pavilion run up to an hour long.

But some visitors who have waited patiently, like a man who gave his name as Mr. Huang, were not impressed.

"There isn't enough to see. There's no advanced technology, even though the U.S. is such an advanced country. There are only films. We can see those at the cinema."